I have been getting so many requests for nightstands and had been relatively unsuccessful in finding a winning pair whenever I went online or out in person to shop.  Those I came across were either particle/pressboard, fake wood, super wobbly, straight up ugly, made of material I can’t use Milk Paint on, or way too expensive to resell.

Who would have thought, right?  I had no idea that nightstands would elude me to this degree.  So, while I was figuring out what my options could be, I started looking at Ikea to see what they had to offer in the realm of unfinished furniture.

I knew they made a small pine chest of drawers called the “Rast”, so I hopped online to check it out: 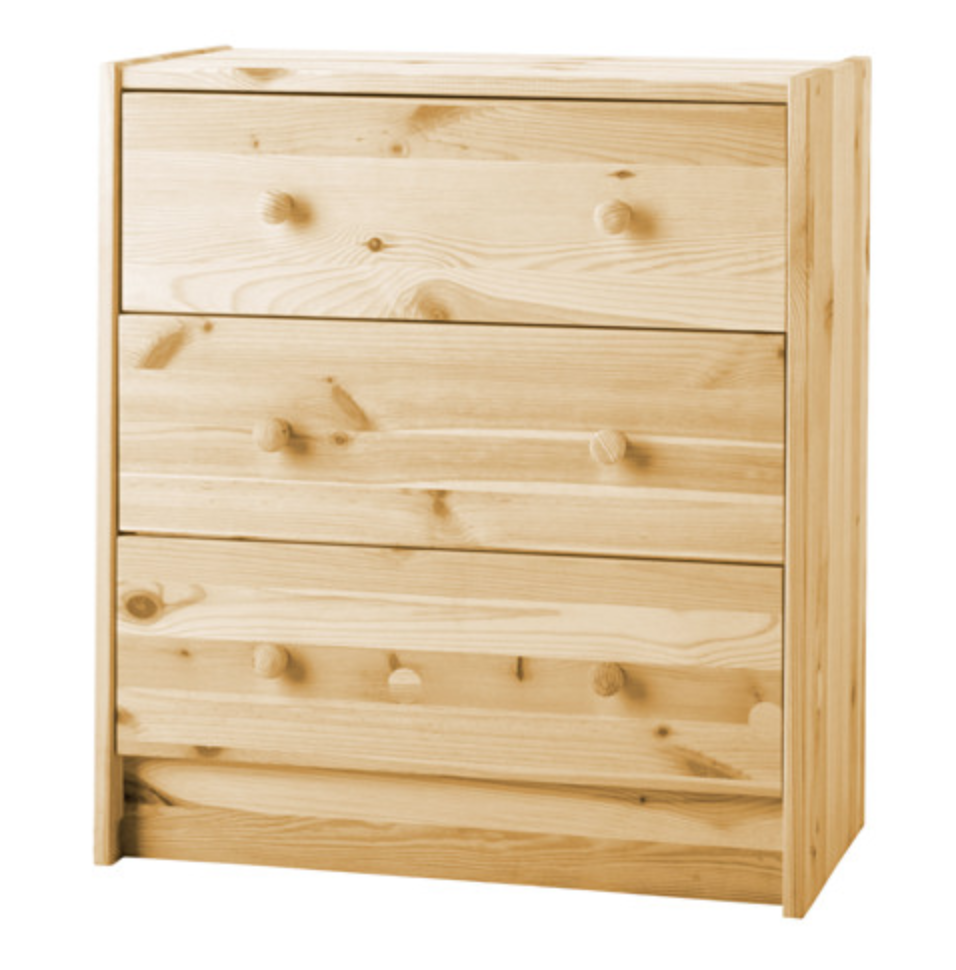 It seemed like a good option!  There are three drawers for plenty of storage and it’s the right height for a nightstand at 27.5 inches.  They had this cute “Tarva” nightstand too, but it was on the short side at 24 inches tall.  Plus, it only had one drawer for storage, so I opted for the Rast. 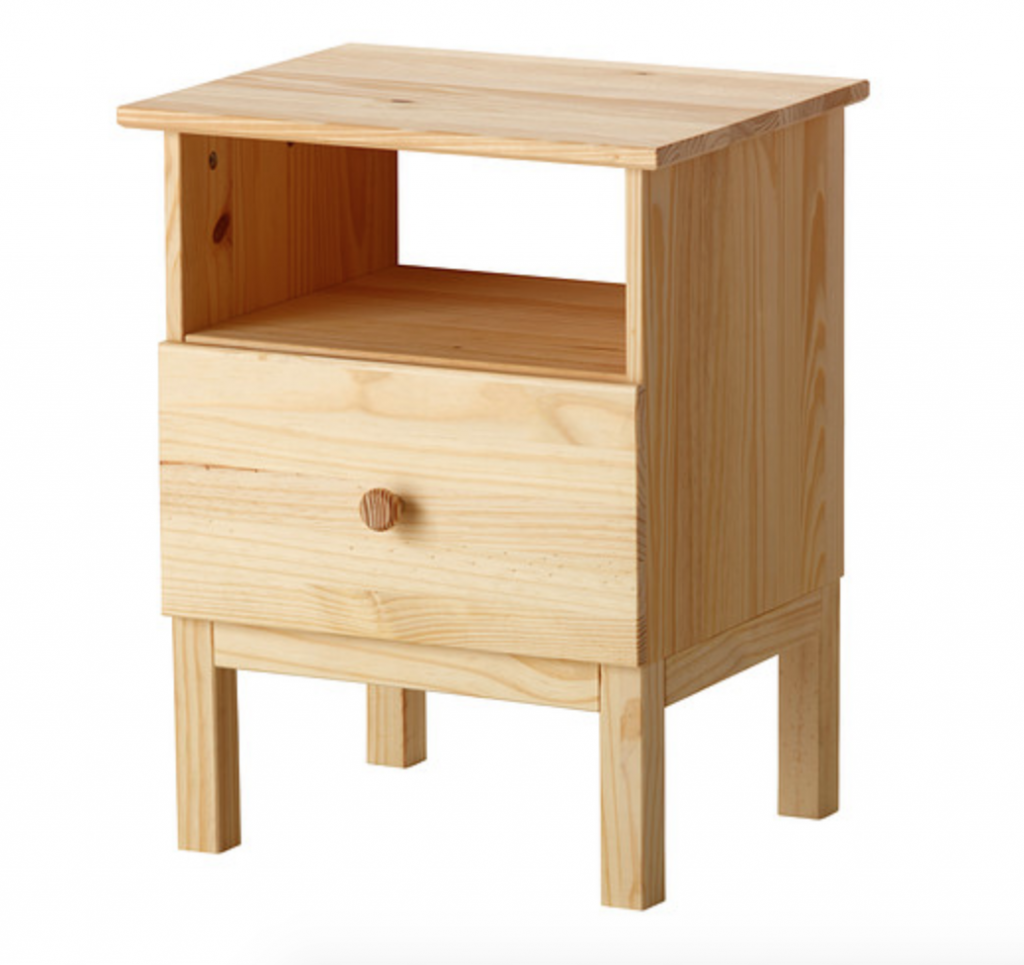 I took a drive in The Marshmallow to my local Ikea and took my sweet time sipping on coffee and munching a cinnamon bun while savoring all of the rooms they have staged.  While I was there, I picked up some staging props for myself and a few unfinished wood crates.  I thought it would be fun to do a Milk Paint tutorial video with them!

I wound up buying two sets of Rasts (four pieces total).  Now I have to be honest with you.  I’m not the biggest fan of Ikea furniture.  I don’t have anything against it, but it’s not my go-to.  I’d rather pick my way through an antique shop and pull out a depression era dresser with cobwebs on the bottom than buy a brand new Ikea dresser.  But that’s MY preference and usually when I shop for pieces to work on, I shop for what I like.  I think Ikea offers wonderful options at affordable prices.  Our new sofa is actually an Ektorp because we couldn’t afford anything higher.  But since I was in a rut and wanted a nightstand option to offer my customers, the Rast was a perfect choice. 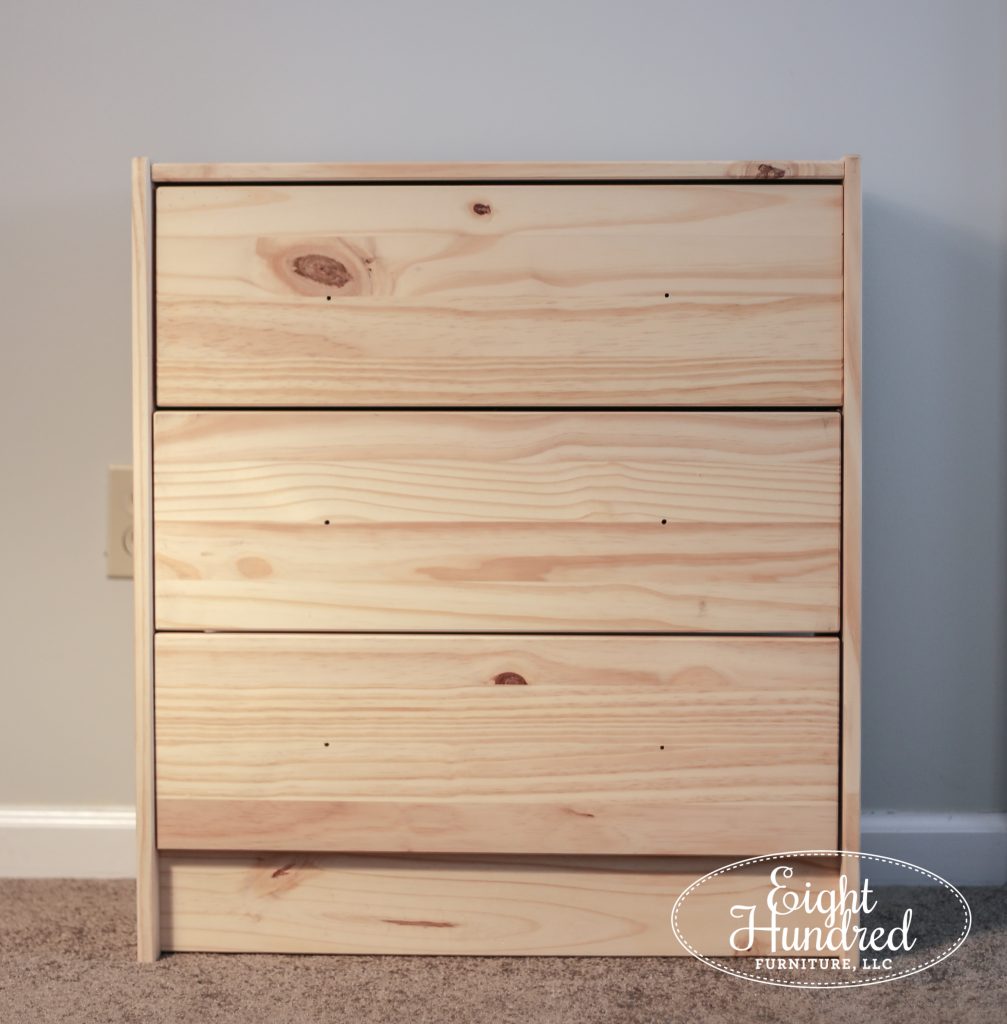 My Mom put a set together for me one day while I was working on another project.  Like all Ikea pieces, the picture directions were relatively easy to follow and we only had one drawer that was accidentally assembled upside down.  It was a quick fix though and soon, they were poised and ready for whatever it was that I had in mind. 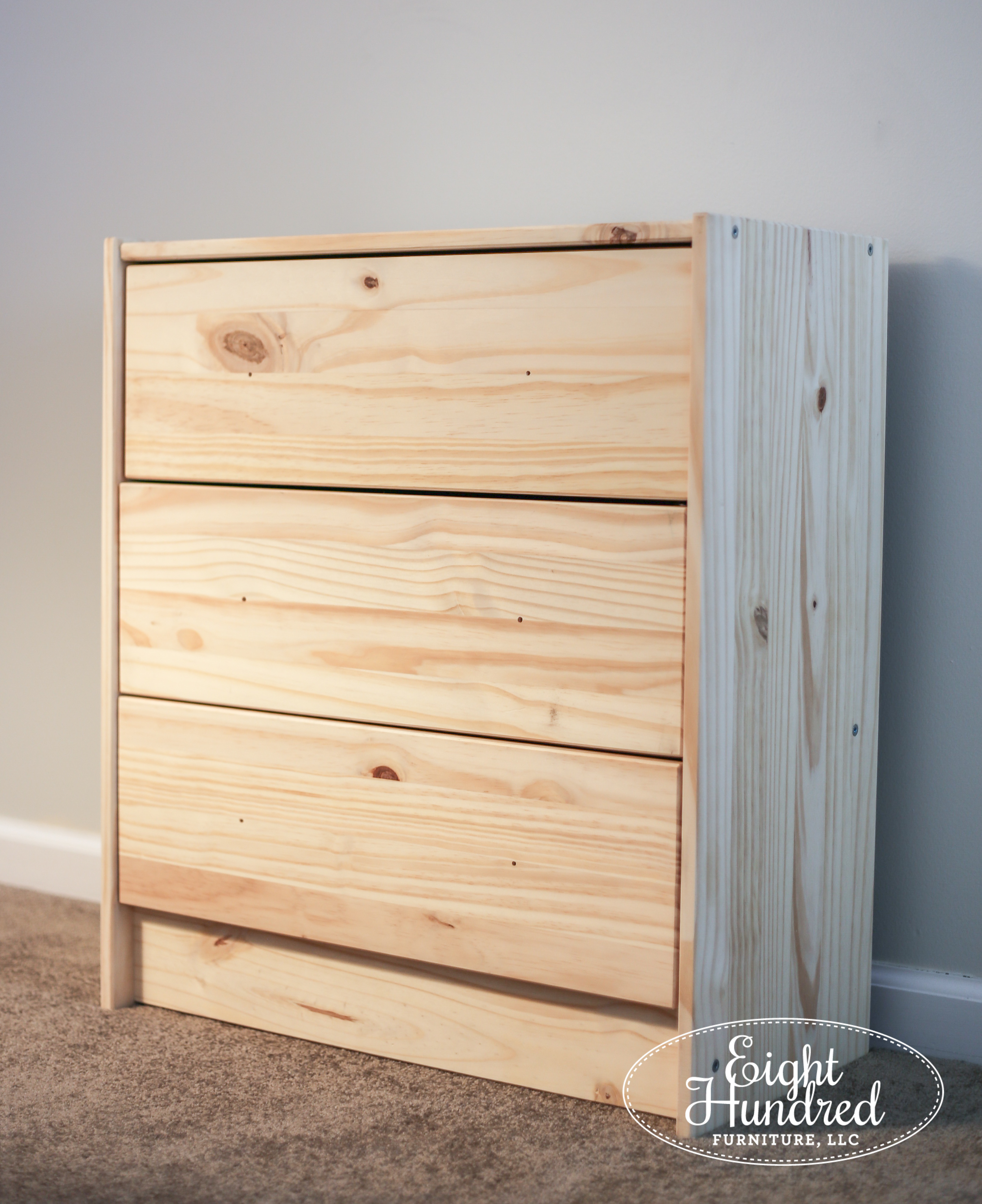 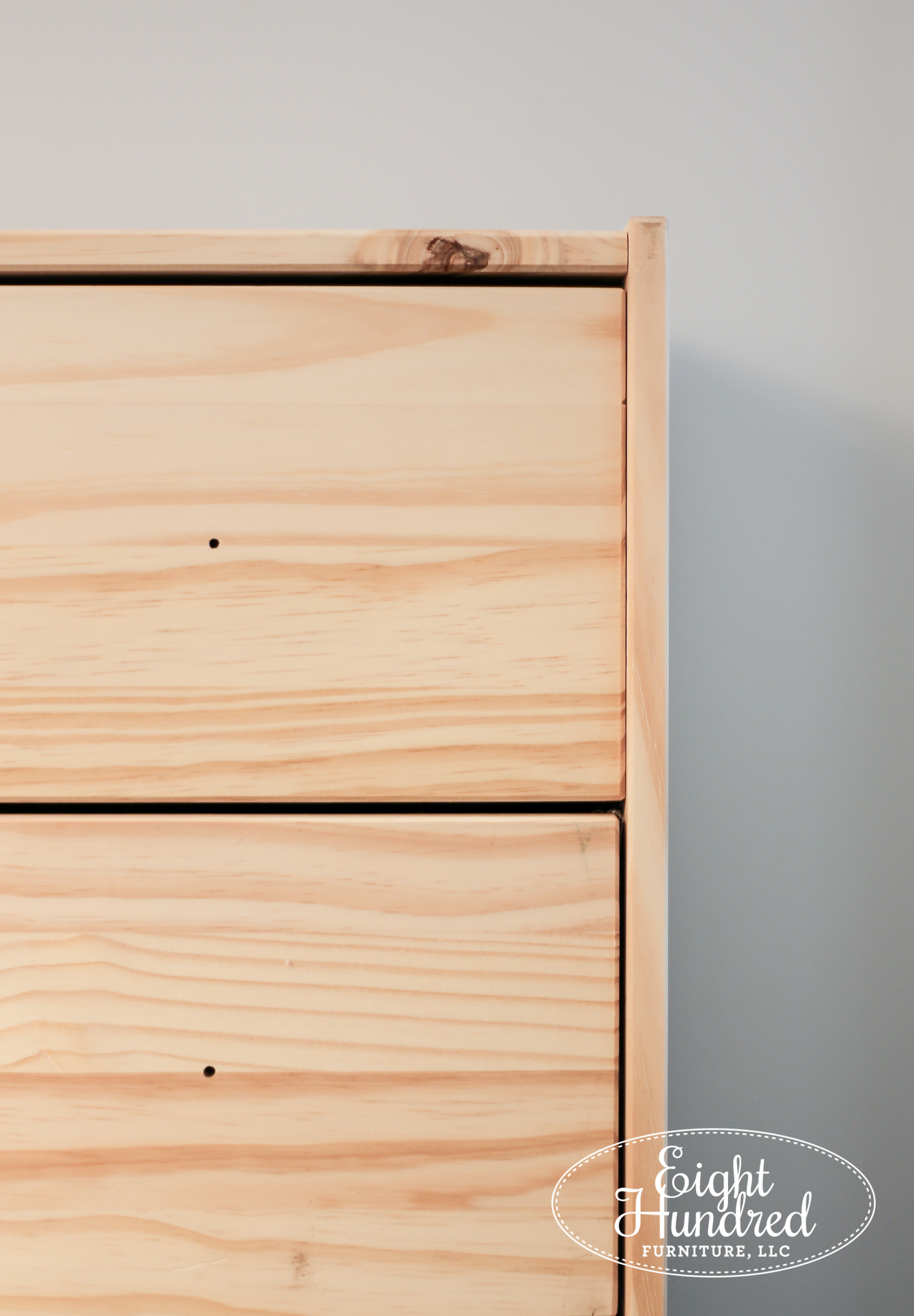 Most of the hardware was concealed except for these screws on the outside. 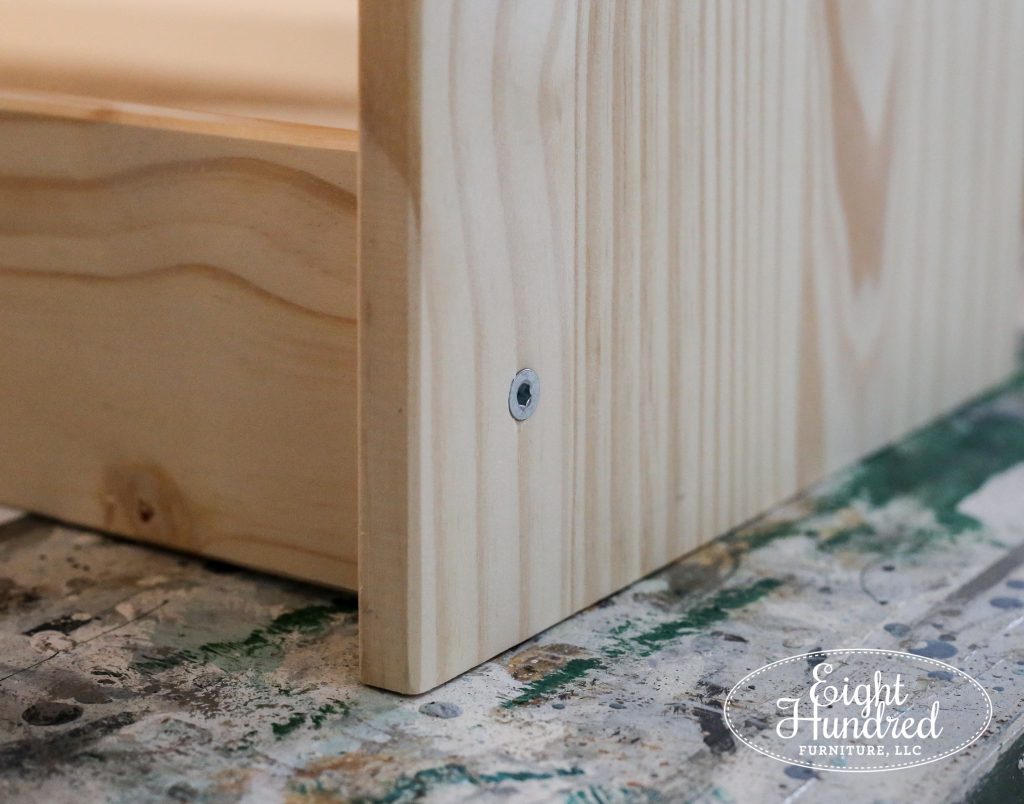 The possibilities of making this piece over were endless.  I did a simple Google search for “Ikea Rast Hack” (which apparently is code for makeover) and toooooooons of pieces came up.  The things people have done with these little chests are amazing!  One lady put four of them together somehow and made her own buffet/console table for her family room!

It wasn’t until I saw this product at Morgantown Market that an idea finally came to me. 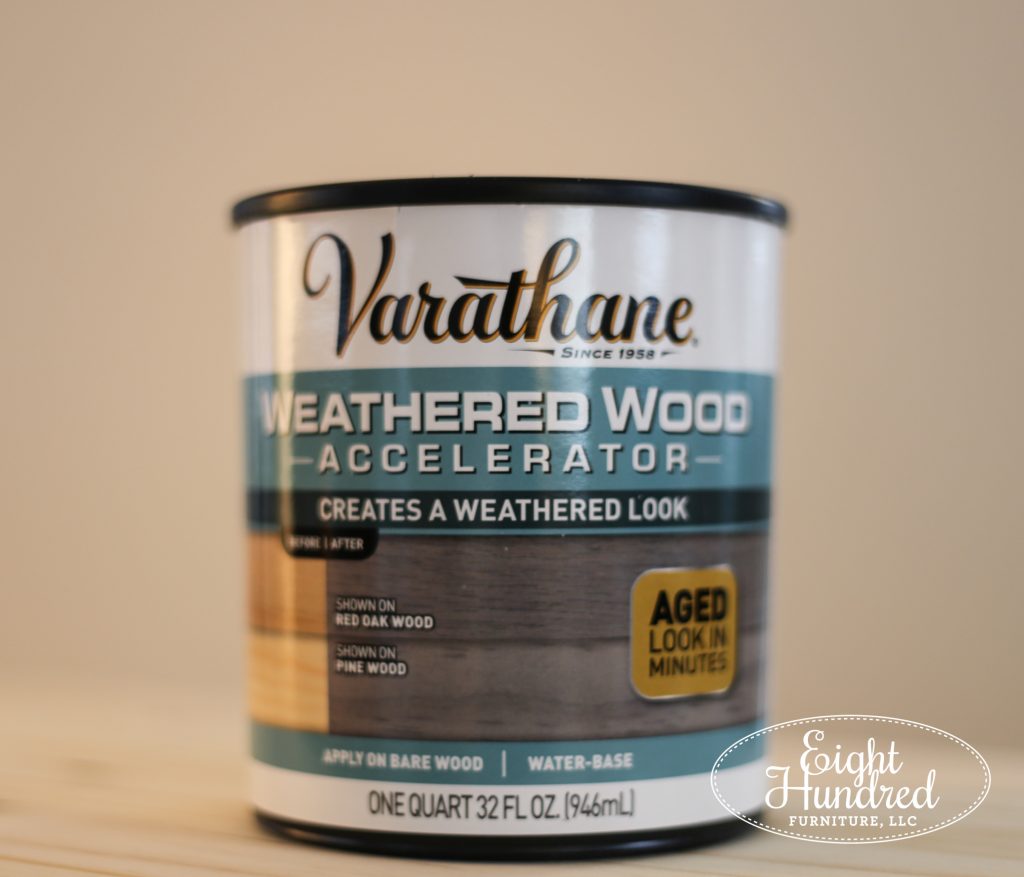 I know the sides of the can are blurry from my 50mm lens, but if you look at the two examples on the label, the bottom shows you what the weathering looks like on raw pine.  My plan was now solidified – I was going to give my Rasts a gray driftwood makeover!

The product has a very watery consistency (which is on purpose) and I gave it a thorough stir before brushing it on.  As you can see below, it kind of looks like you’re painting with dirty water. 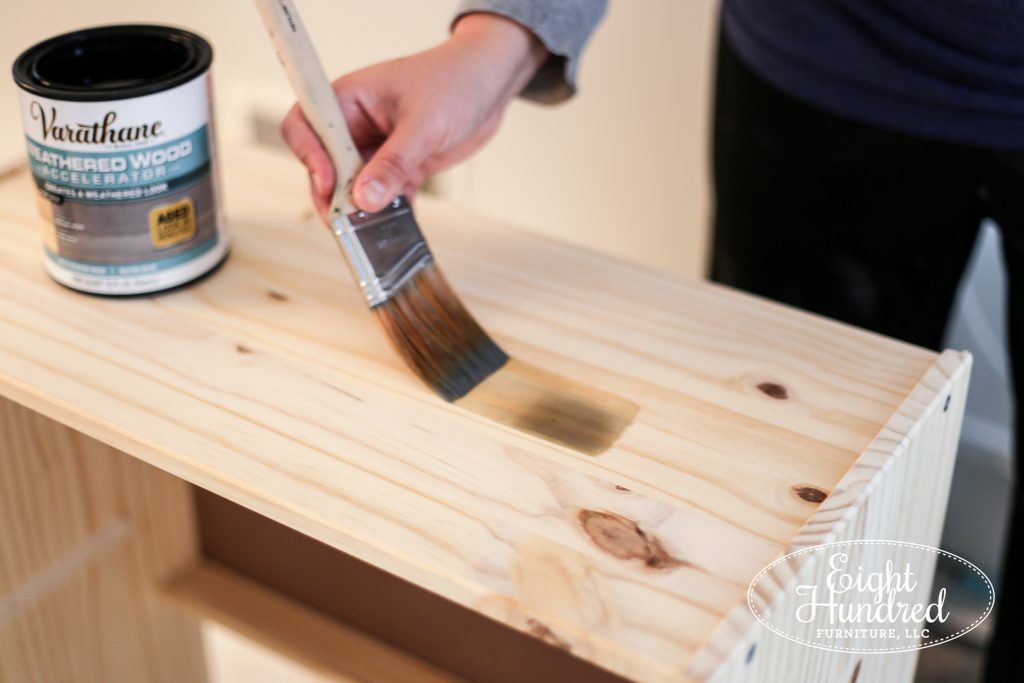 The weathering process started to happen immediately after my paint strokes.  This was applied in about a minute and it didn’t take long for the beautiful gray and blue tones to make their appearance. 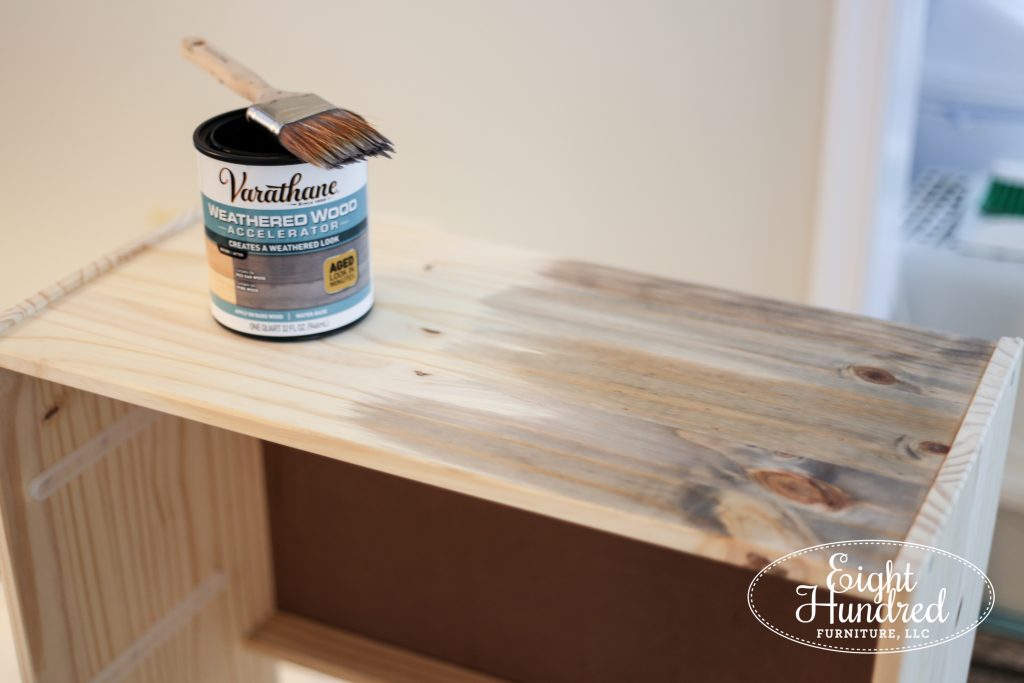 Here’s an example of the side so you can see the difference.  The product essentially causes a chemical reaction with the tannins in the raw wood you are painting, leaving you with a gorgeous driftwood finish!  Every species of wood stains differently, but this was pretty spot on with the pine example on the can. 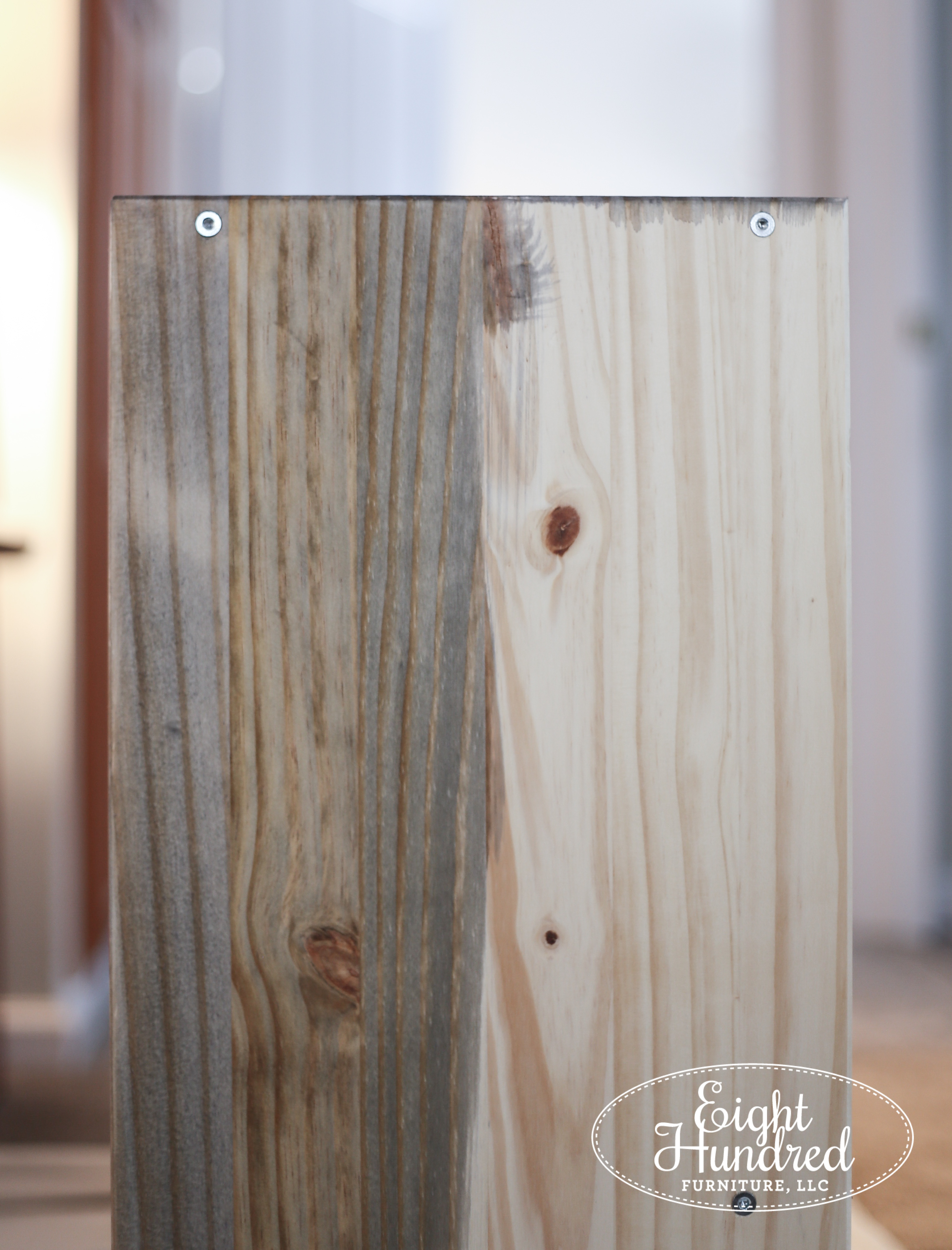 I’ve tried to do this on my own by taking steel wool and putting it in vinegar and letting it dissolve.  It was messy, smelly and didn’t quite do the job I was hoping it would have done.  This product was odorless, easy, and I saw results within seconds.  Plus, it’s less than $20 per can at Morgantown Market, making it affordable in my book.

I worked on the Rasts upstairs during a string of snow days a few weeks ago.  It was pretty cold in the basement workshop, plus I wanted to watch Downton Abbey while I stained!  I spread my biggest dropcloth out and carefully worked my way around each piece.  I did the bodies first and then took the fronts off the drawers so I could stain all of the sides. 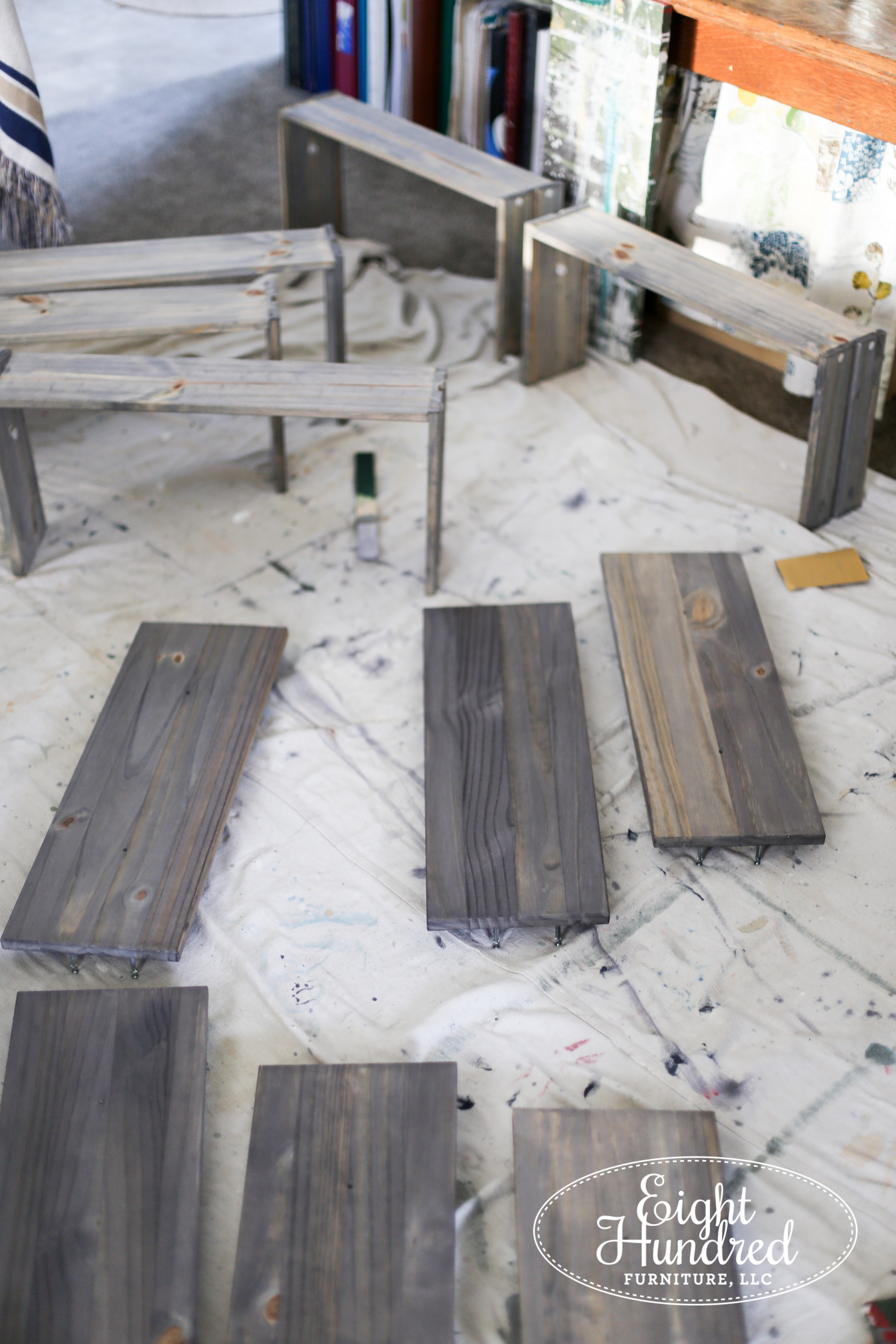 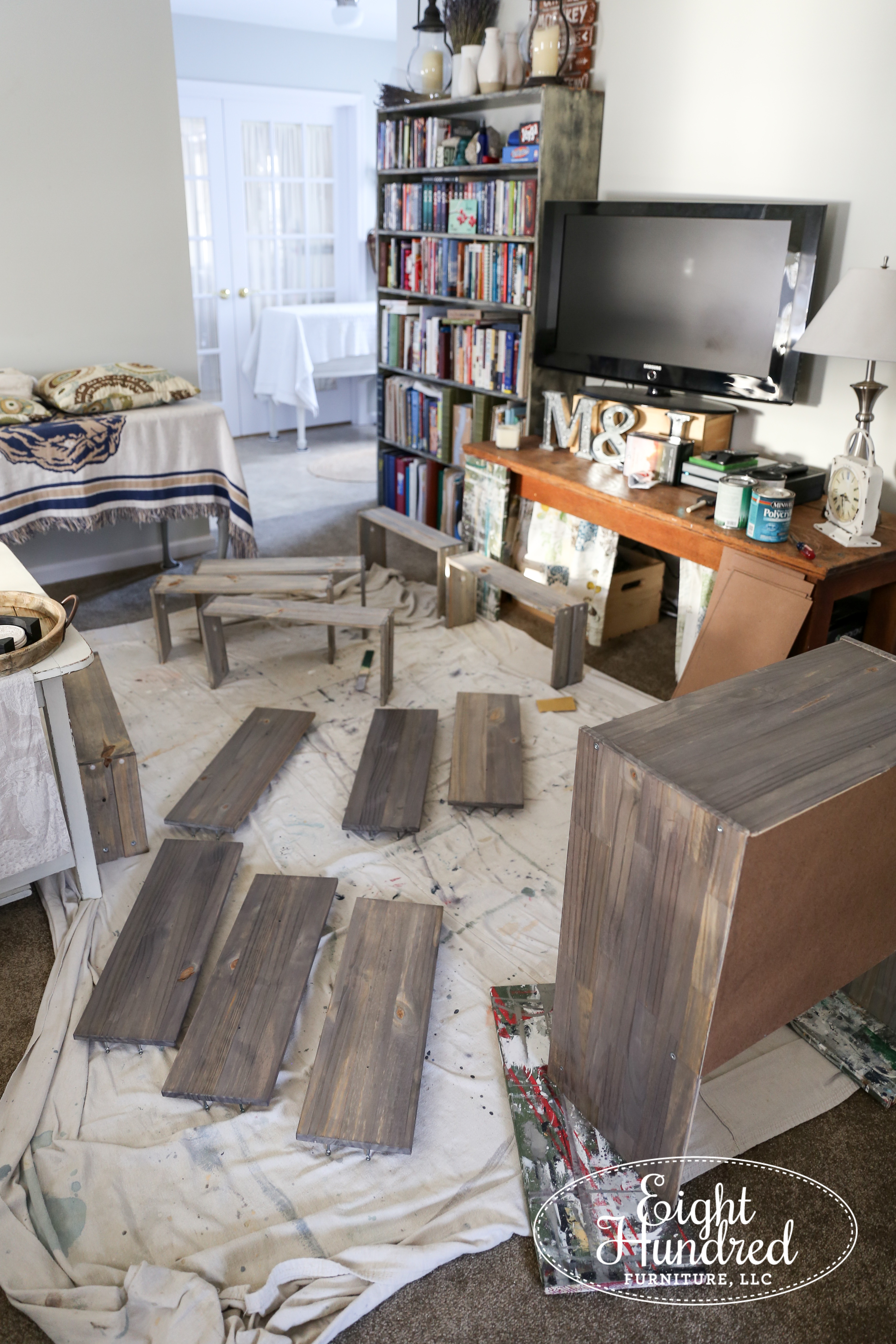 Jake took it all in stride though, weaving his way around all of the pieces and standing off to the side while I worked.  He always stays close enough to know what’s going on, but just far enough away to not be in the thick of things. 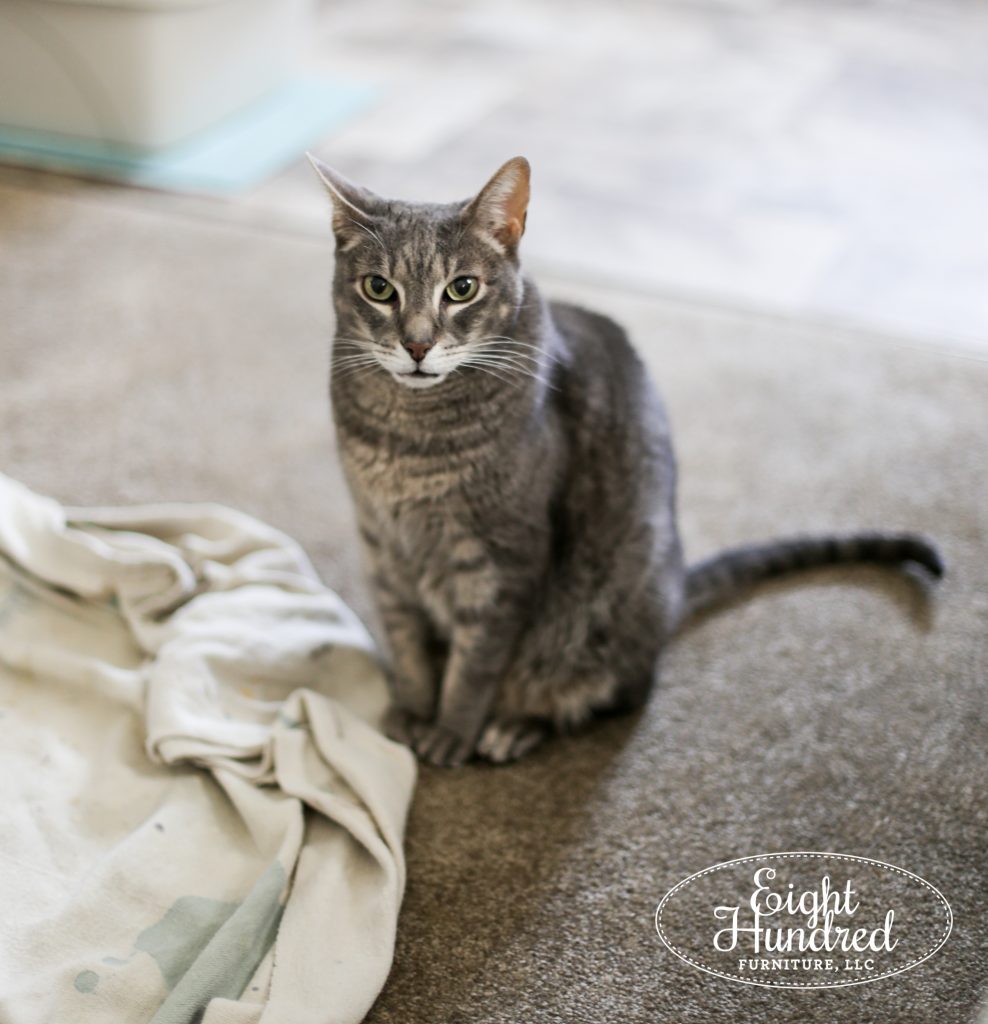 Once the Rasts were all stained, I sanded them down with 400 grit sandpaper to get them super smooth.  The watery stain raised the grain, leaving them slightly rough to the touch.  Once they were all smooth again, I sealed them with a water-based sealer in a Satin finish.  That ensured they would be protected for their future owners and have a very subtle shine.

I had a tough time deciding on hardware.  The Rasts came with wooden knobs, but I thought they were a bit boring and would disappear if they were stained in the same manner.  Did I want to do knobs?  Cup pulls?  Handles?  My problem was that I would need twelve of whatever I decided to use, which could potentially become very expensive.  After about two weeks of deliberating, I found the perfect choice from D.Lawless. 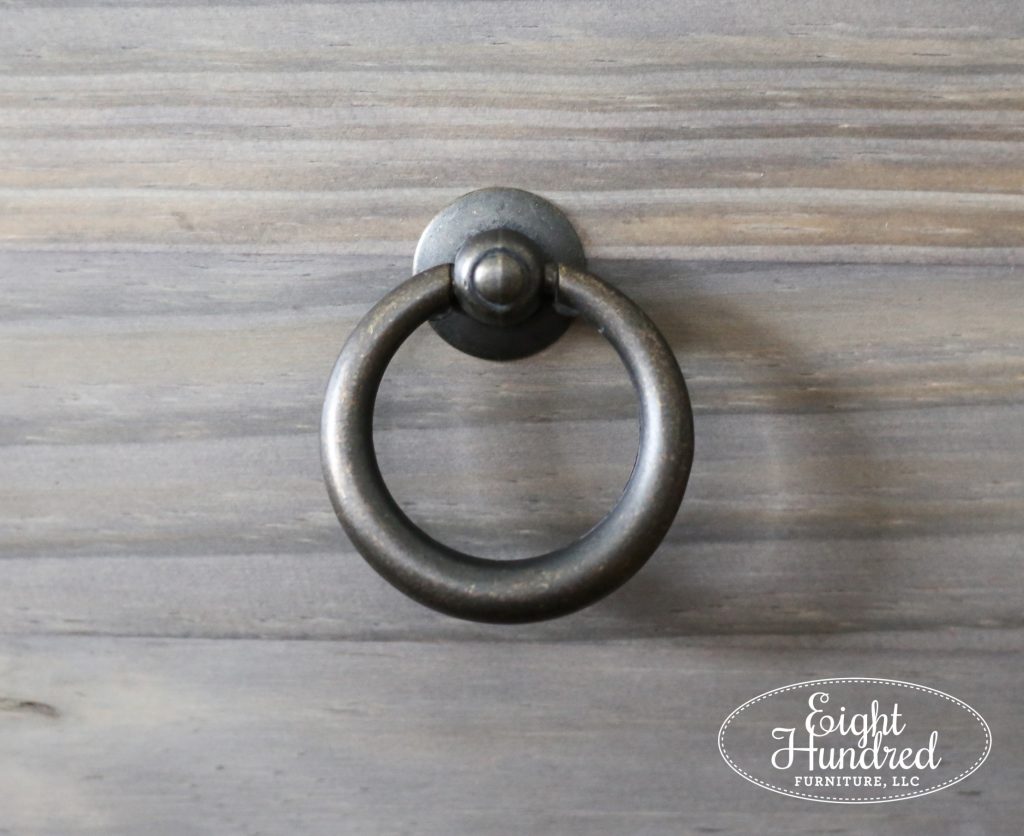 Their shape was a nice mixture of modern and farmhouse, which is kind of what I was going for with the overall feel of the nightstands.  Getting them was a bit of a hassle.  The listing said they came with screws but that wasn’t the case.  My twelve beautiful ring pulls arrived…with no screws.  Apparently, because I have a business account with the company, I need to request screws if the hardware doesn’t come with screws included in the package.  But how would I have known that?  At any rate…I ordered the screws and they arrived in a separate package.  When I installed the ring pulls, they were too long by about an eighth of an inch.  I don’t have a pair of bolt cutters and I wasn’t about to take a saw to the screws to shorten them, so I did the next best thing.  I stacked a bunch of small washers to make up the difference and they allowed the screws to be tightened properly. 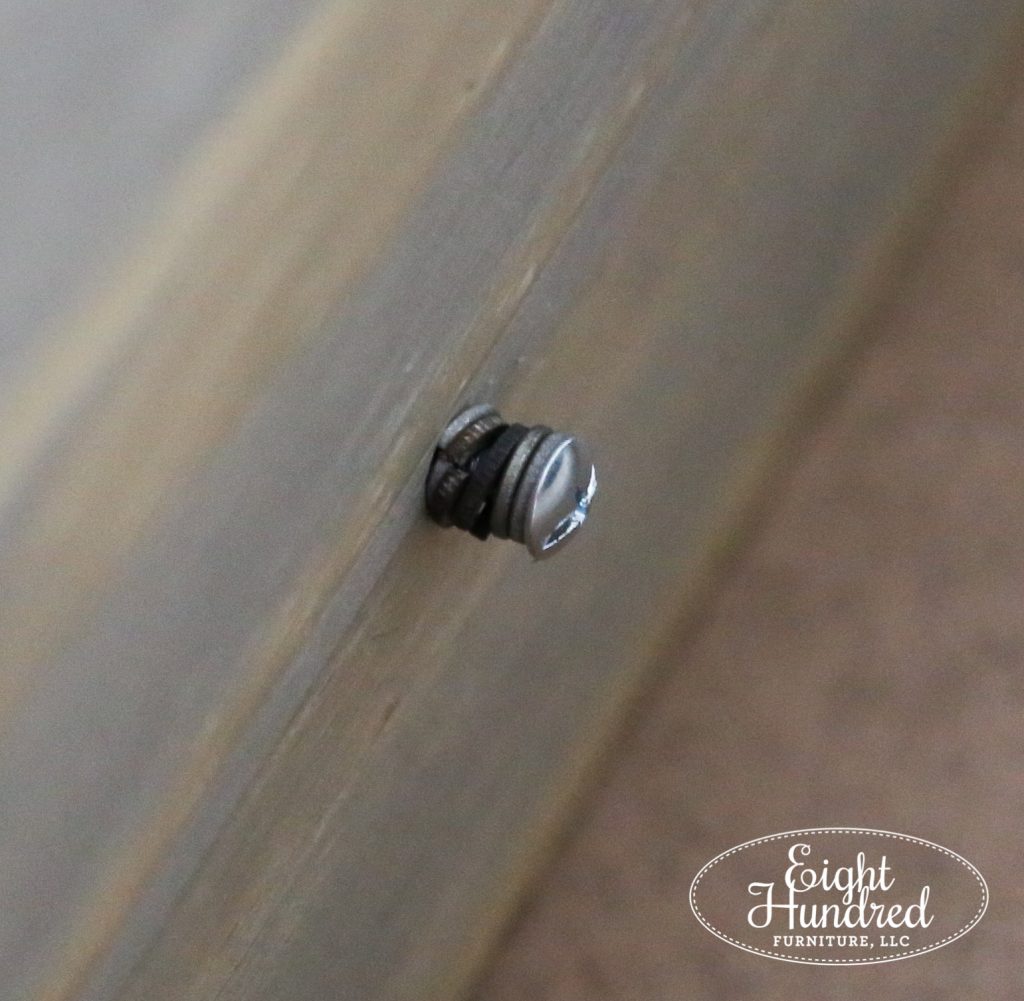 Now I know that this isn’t an idea solution, but you don’t really see the inside of a drawer that often, do you?  Plus, who really pays attention to the screws that hold your hardware on anyway? 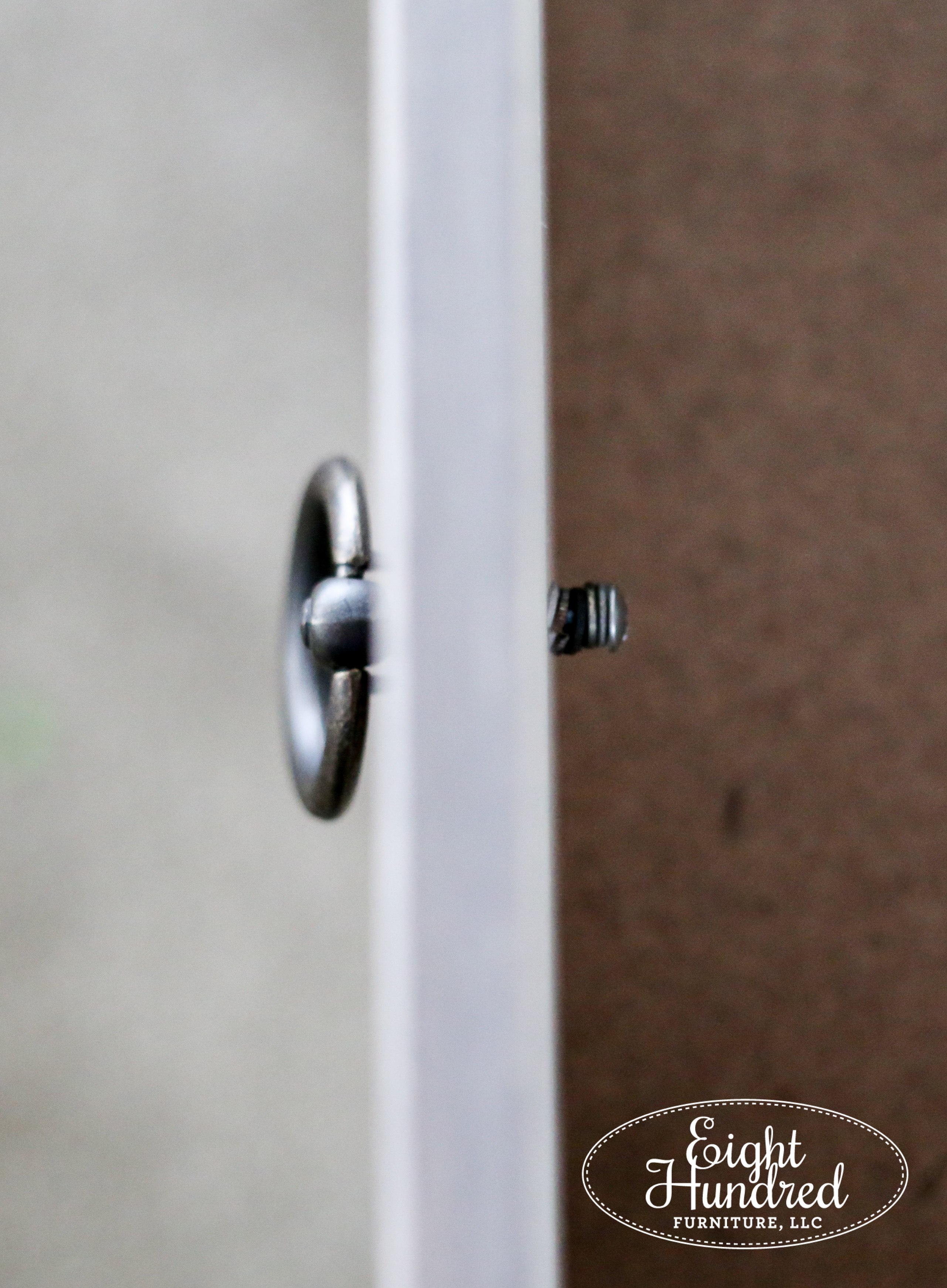 From the front, they look absolutely lovely, and that’s what matters! 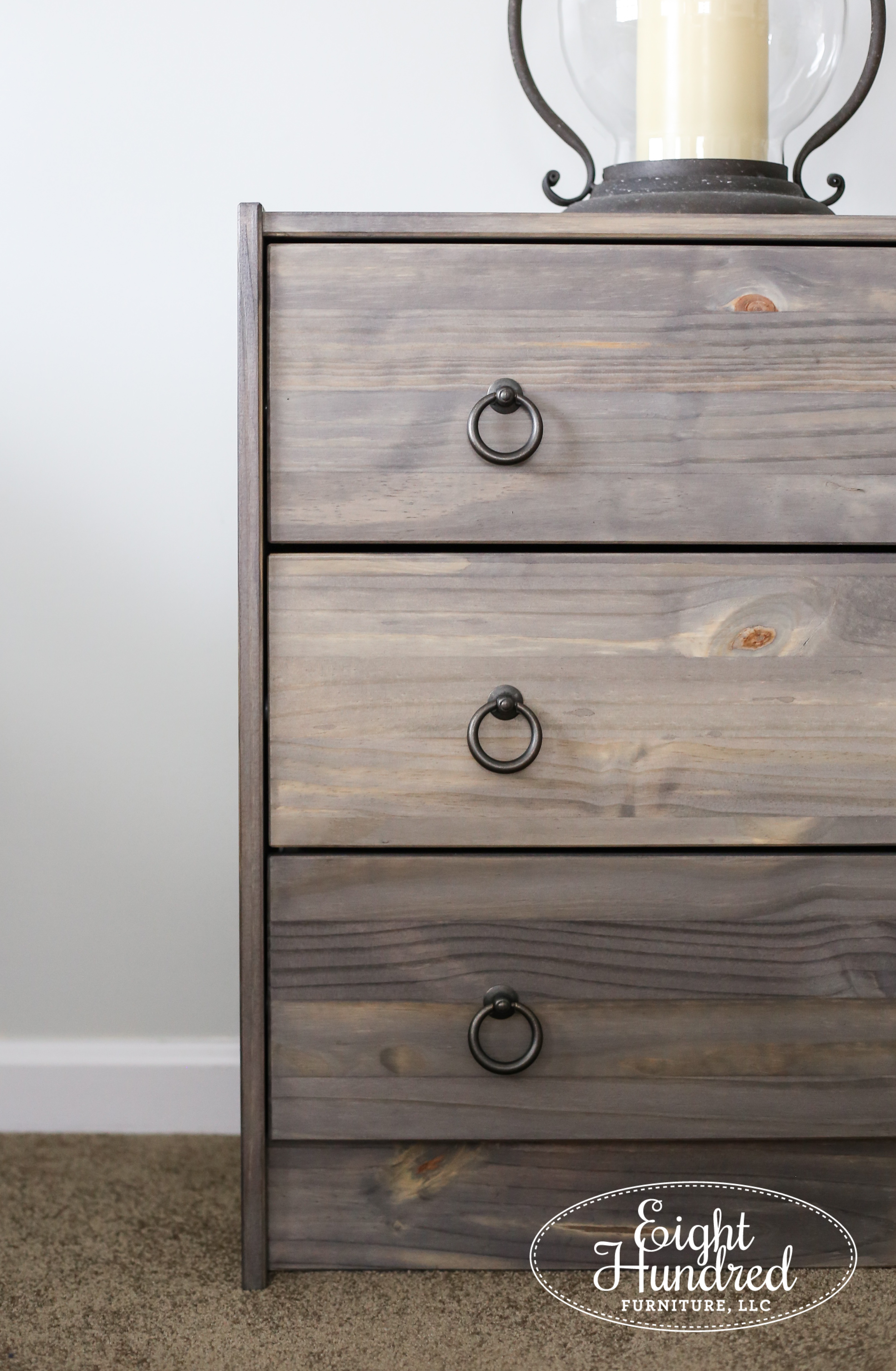 They are just the right compliment to the weathered wood stain finish. 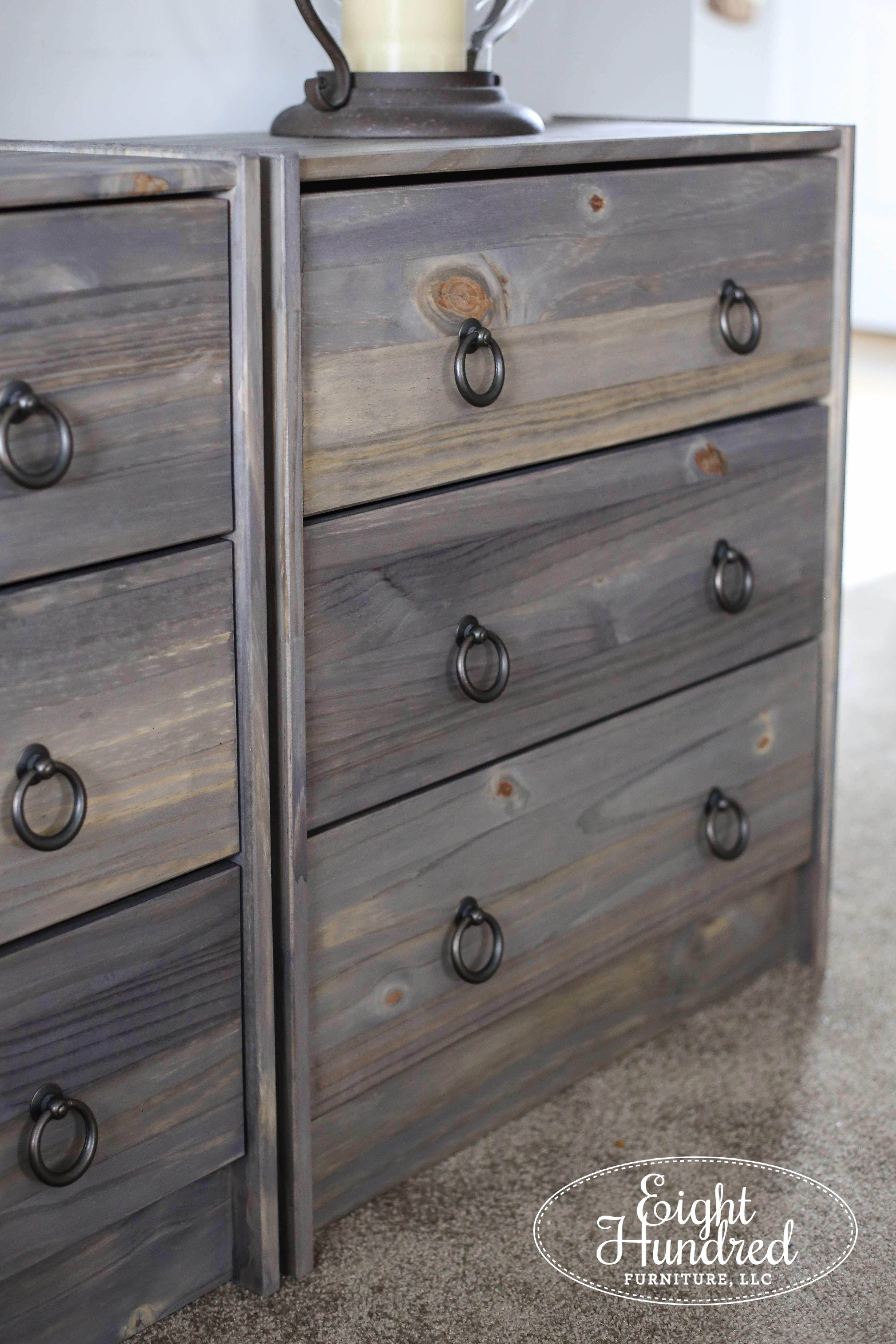 I carried the dark metal accents through to the carriage lanterns I propped up on top of each nightstand. 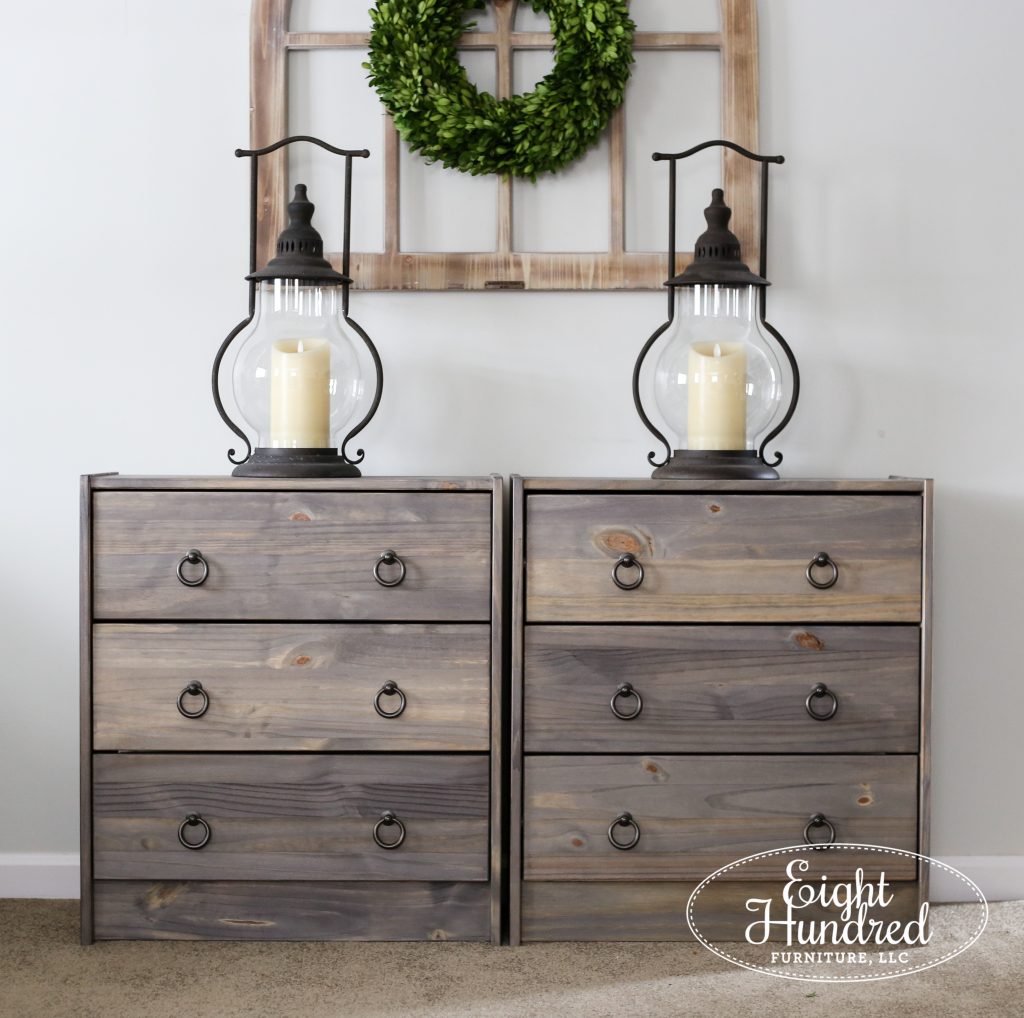 I think they turned out really well.  I’m happy with just about every aspect of their makeover, with the exception of the screws for the ring pulls.  But you know what?  That’s what happens sometimes when you take a pre-fabricated piece of furniture and put your own spin on it.  Some aspects of your makeover won’t work exactly right, but it doesn’t deter from the overall beauty of the finished look.

I borrowed my Mom’s window from Magnolia and hung a preserved boxwood wreath to add some vibrant greenery to the scene.

The drawers are stained on all sides, including the interior (with the exception of the bottom). 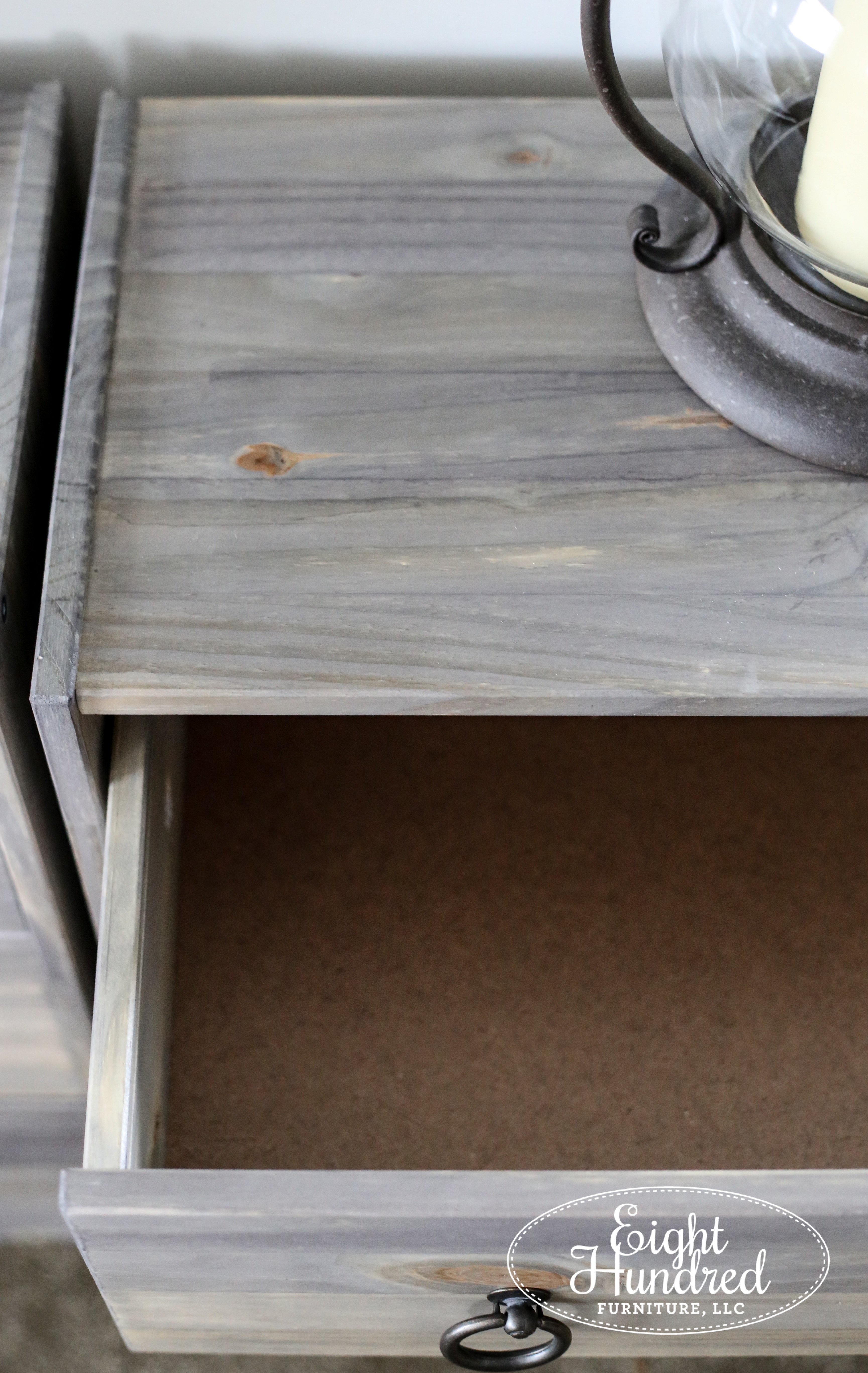 Speaking of the stain, it created such lovely variations across the surface of the pine wood! 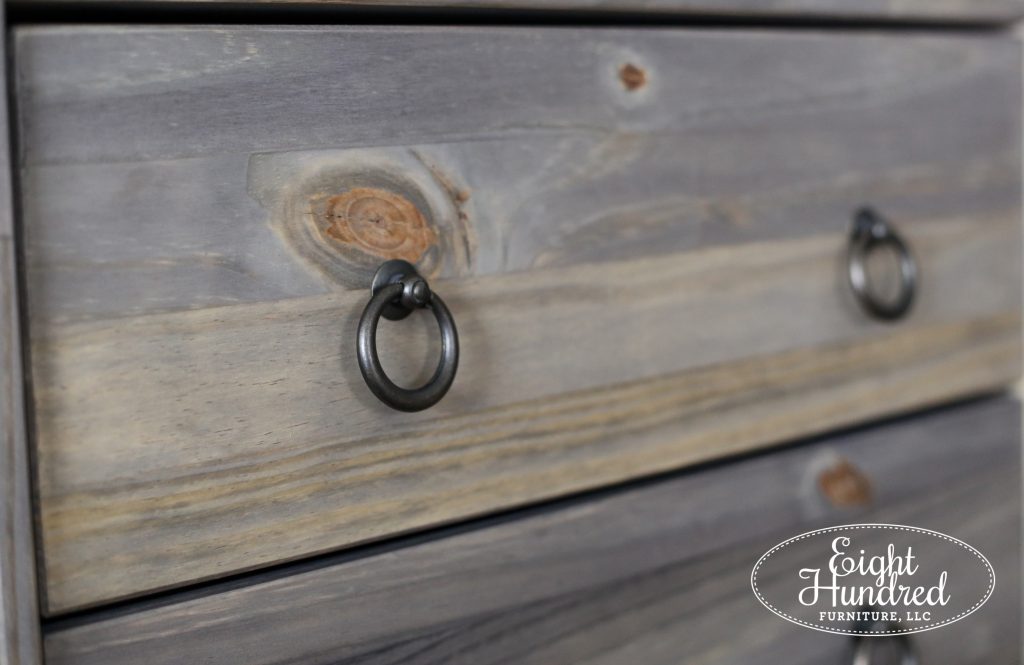 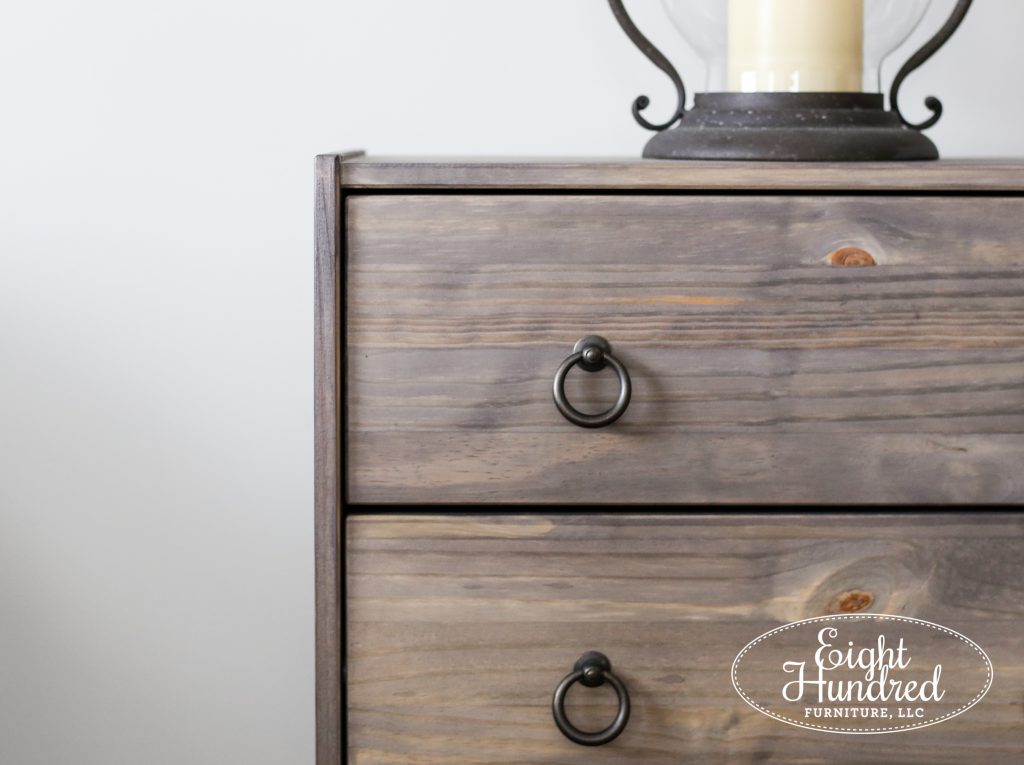 This knot happens to be one of my favorites. 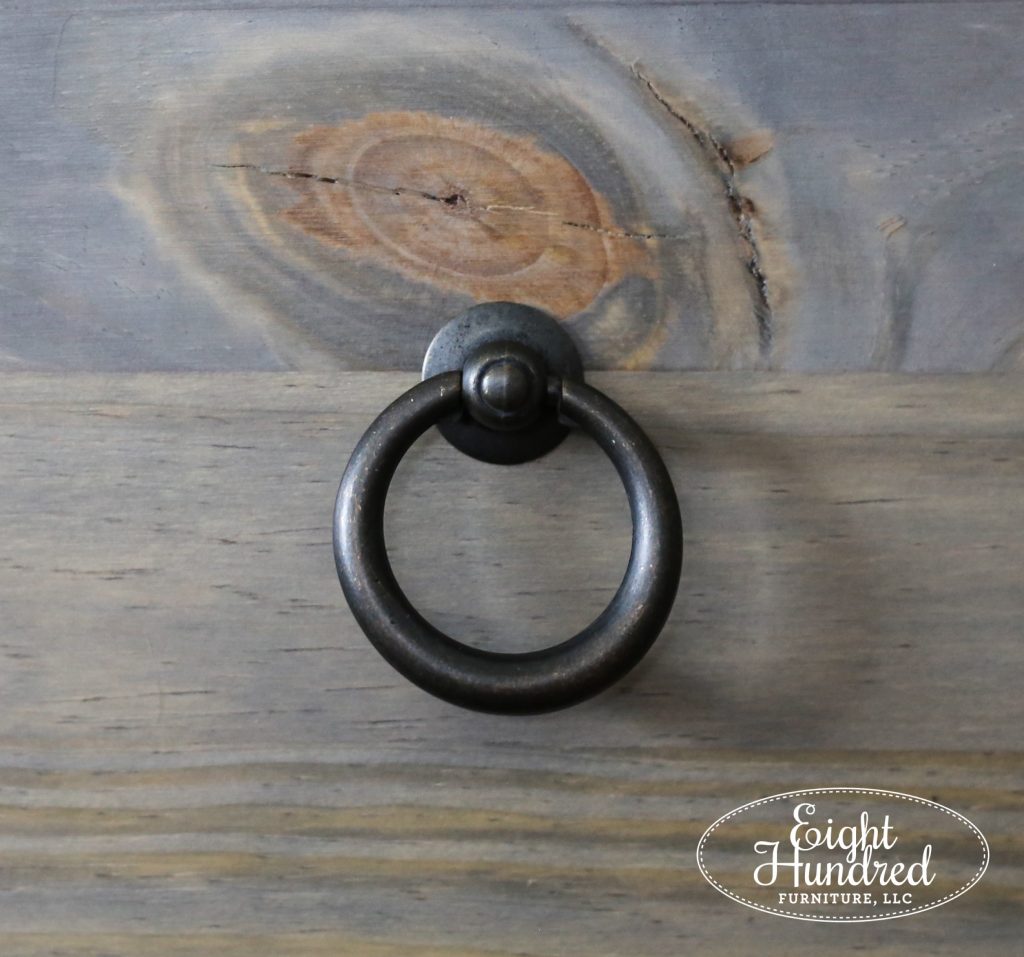 My Dad helped me load these two into The Marshmallow, and Mom and I ran them down to Morgantown Market last night.  They are now available for $120 each or $235 for the pair.  They measure just over 24 inches wide, 11.75 inches deep, and 27.5 inches tall.  Come give them a test drive if you’re interested, and pick up your own can of weathered wood stain while you’re there!

← Balloon Back Chairs and a Marble Top Chest My First Market →