I found a gorgeous dresser on Facebook Marketplace the other day and immediately scooped it up.  It was the kind of dresser you don’t need to think about…you just buy it…especially when it was priced the way this one was.

It made its way upstairs and was quickly disassembled for its makeover (which I’ll get into in just a second). 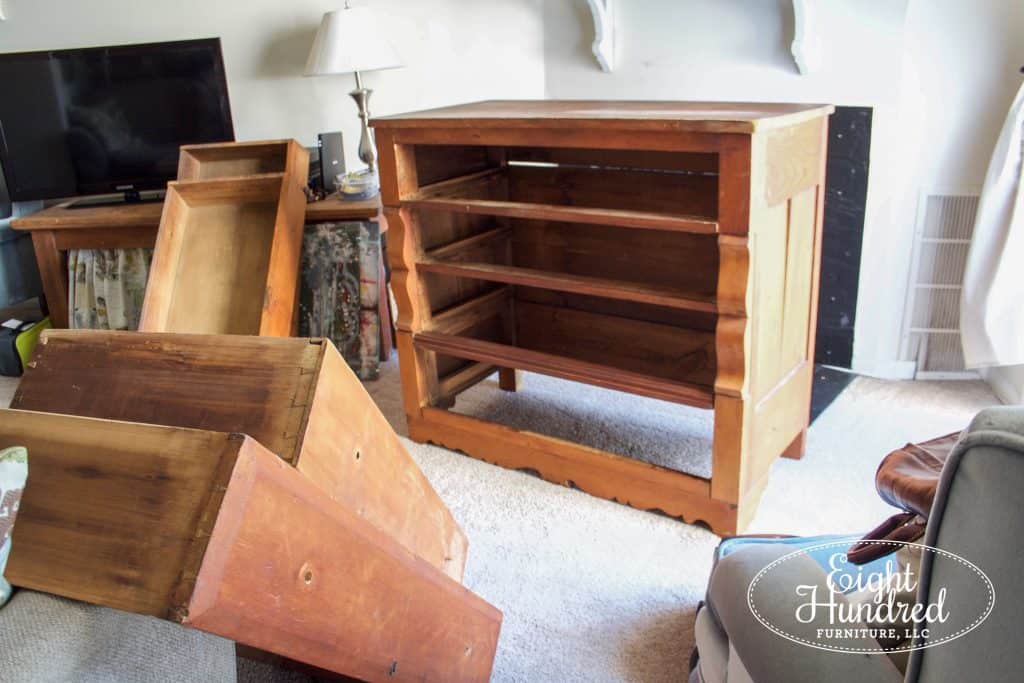 The interesting thing about this dresser was that it was described as “pumpkin pine”.  I had never heard of this type of wood before, so I did some research.  Turns out that “pumpkin pine” is actually Eastern White Pine that has turned orange over decades of aging.  “These warm tones are brought out by tucking sawn boards between layers of straw for aging, and wiping them down and turning them every two years.” (Source) 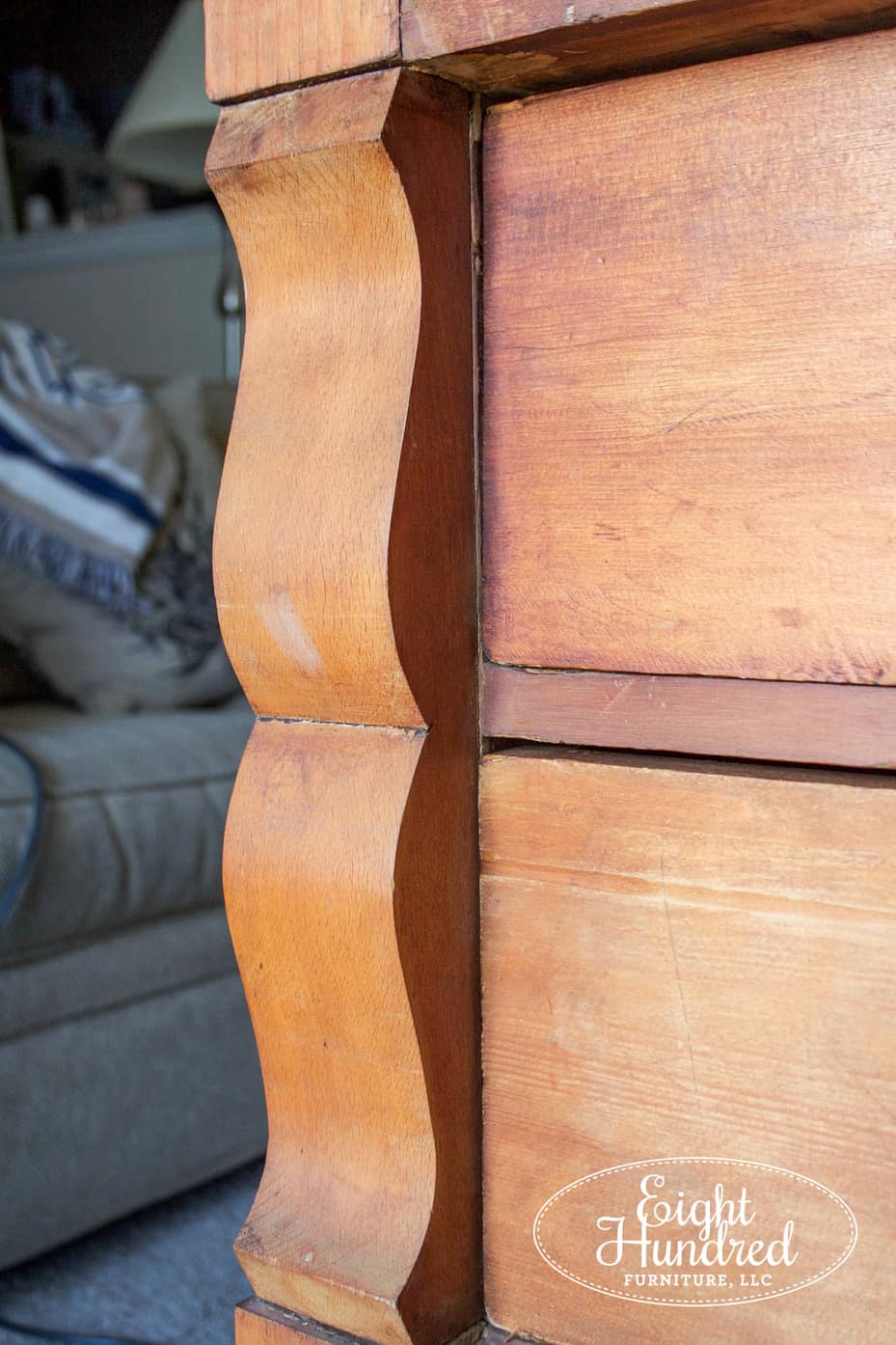 Another source wrote that, “the preparation of pumpkin pine, sawn boards were layered and straw was placed between each board. Customarily the boards would be dated and signed by the person who started the project. Every two years, the boards would be wiped down, turned and new straw would be placed between them. After seventy years, or so, when the boards had the proper depth of color, they were ready for use. Generally speaking the prepared wood was kept in the family, but it was sometimes given as a gift, or to cancel a debt.” (Source)

So apparently I had a gorgeous dresser that was made out of a wood that takes decades of care and preparation to age and color just perfectly and I got it for an incredible price.

After my research, I decided not to paint this piece. Because the color of the wood took so much time and care to develop, I just couldn’t bring myself to cover it over with paint. It actually started growing on me.

The dresser had signs of age and wear all over it too, which I found to be quite charming. Here’s the top. 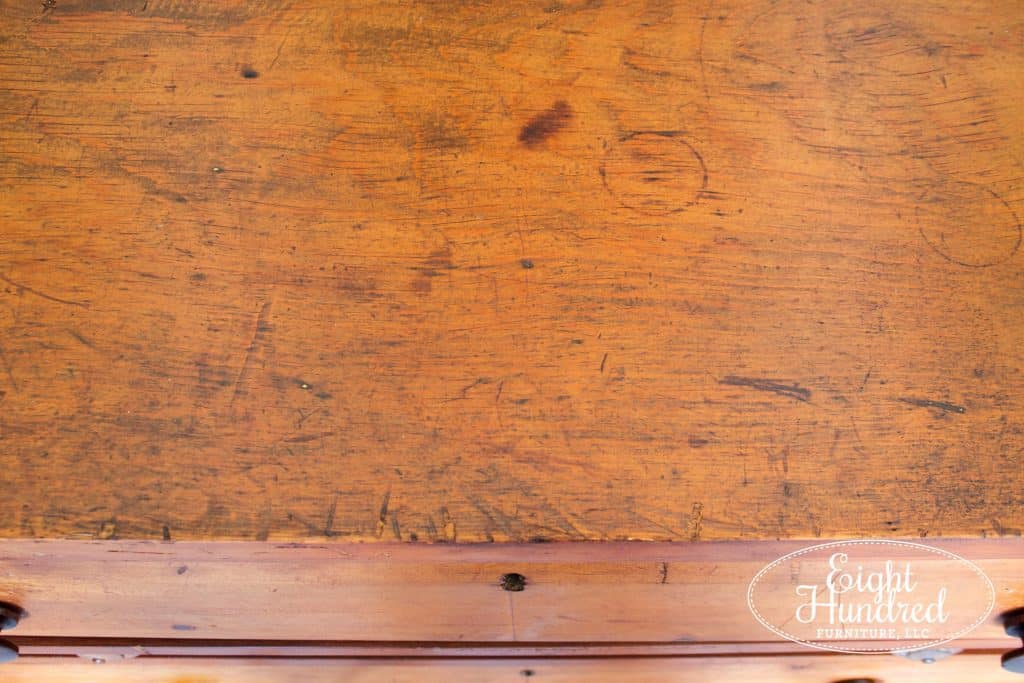 In addition to the color and the age, the dresser had amazing features.  The drawers alone were incredible!  The bottoms of the drawers were beveled. 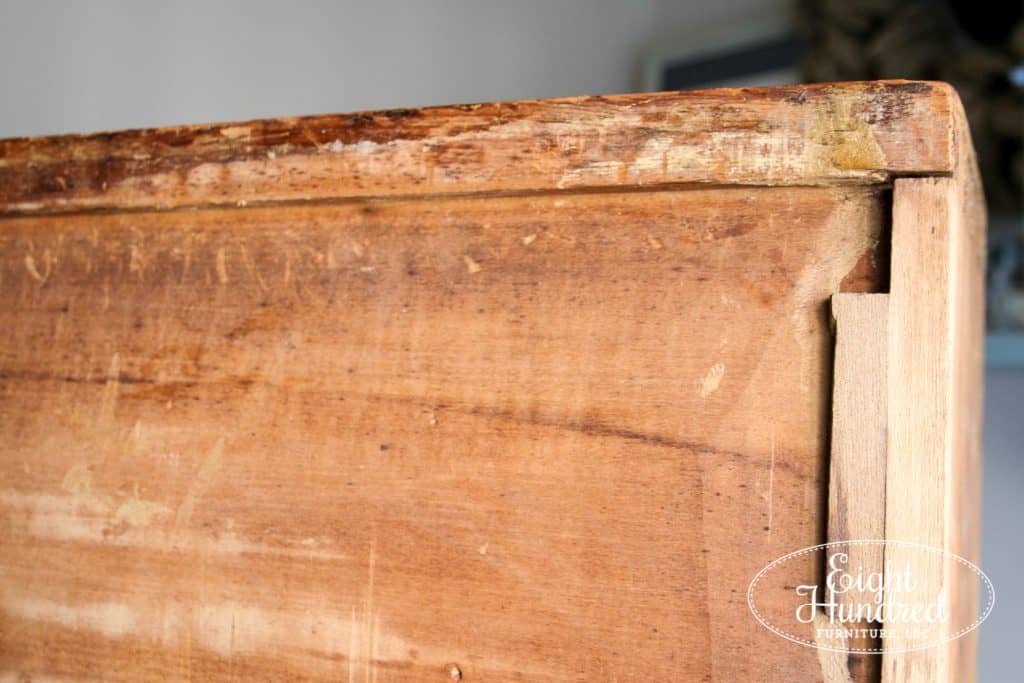 There were incredible dovetail joints on each end of the drawers.

There were also dovetails on the sides of the dresser too!  These pretty joints were on the bottom left and right sides. 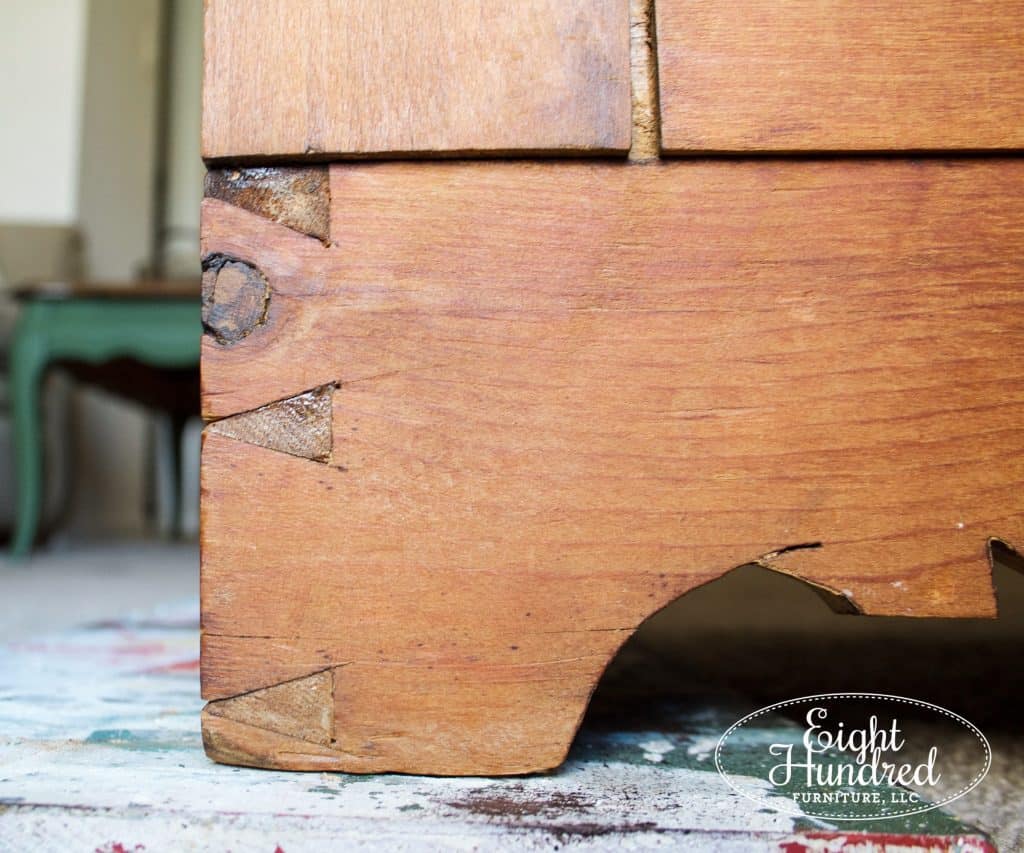 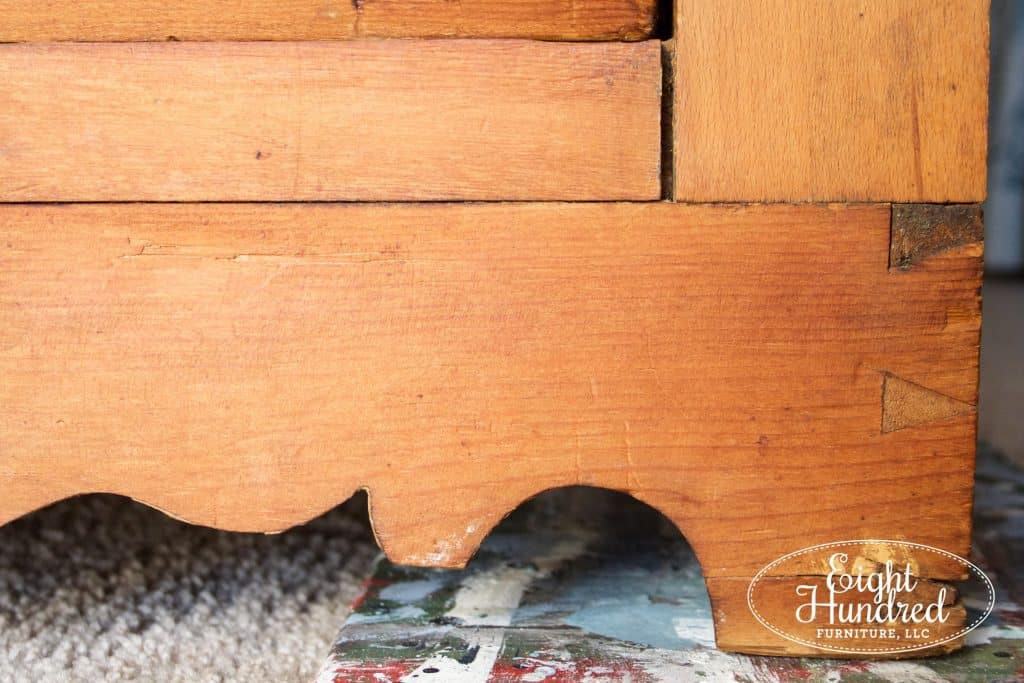 And the scalloped gingerbread detail running along the bottom ledge was just breathtaking.  I loved the pattern!

Now if you’re not a furniture person, you’re probably wondering why I’m nerding out over a piece of furniture.  It’s not like it’s Yellowstone National Park or anything.  Well, in my world, all of these little details equate to craftsmanship and design.  Someone took the time to put this dresser together in such a way that it’s still solid decades later.  I don’t know the exact age of this piece, but I would feel comfortable taking a gamble at 100 years.  You don’t see furniture made this way anymore.  It’s all done by machine with cheap joinery, put together with allen wrenches and isn’t made completely of wood.

To preserve the natural beauty of the dresser, I kept the makeover simple.  It started with taking all of the drawers out and vacuuming the piece inside and out.  My vacuum probably ran for 15 minutes straight while years of dust, dirt and grime were sucked up, much to my satisfaction.

After the inside and outside were clean, I grabbed one of my Miss Mustard Seed’s Wax Puck. 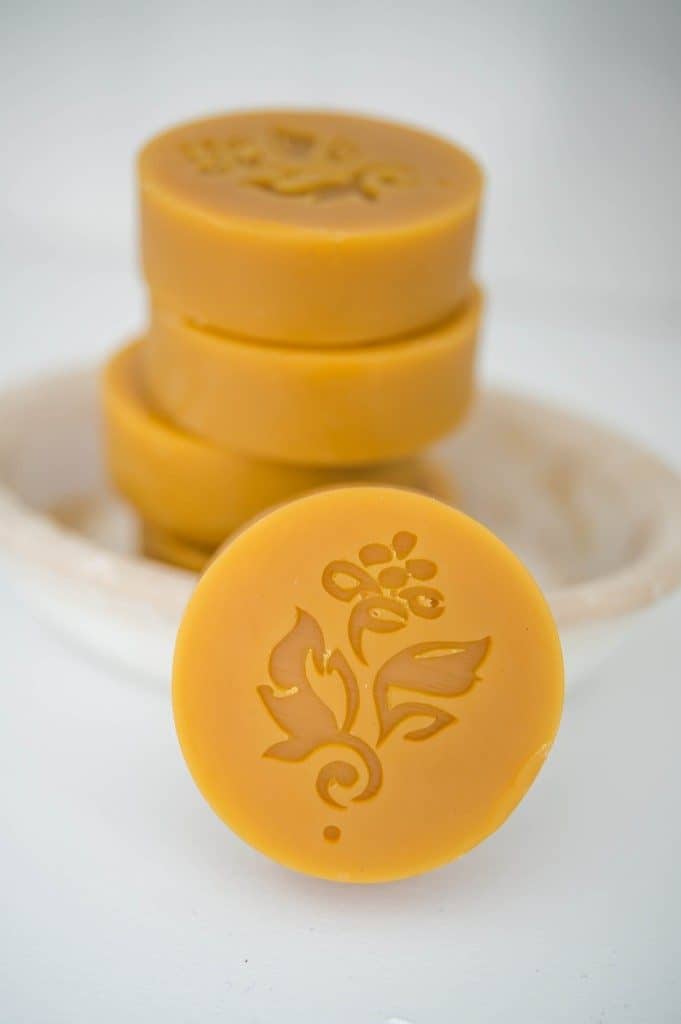 These handy little disc of beeswax have lots of uses, but my favorite is for lubricating the runners of sticky drawers on really old pieces of furniture. 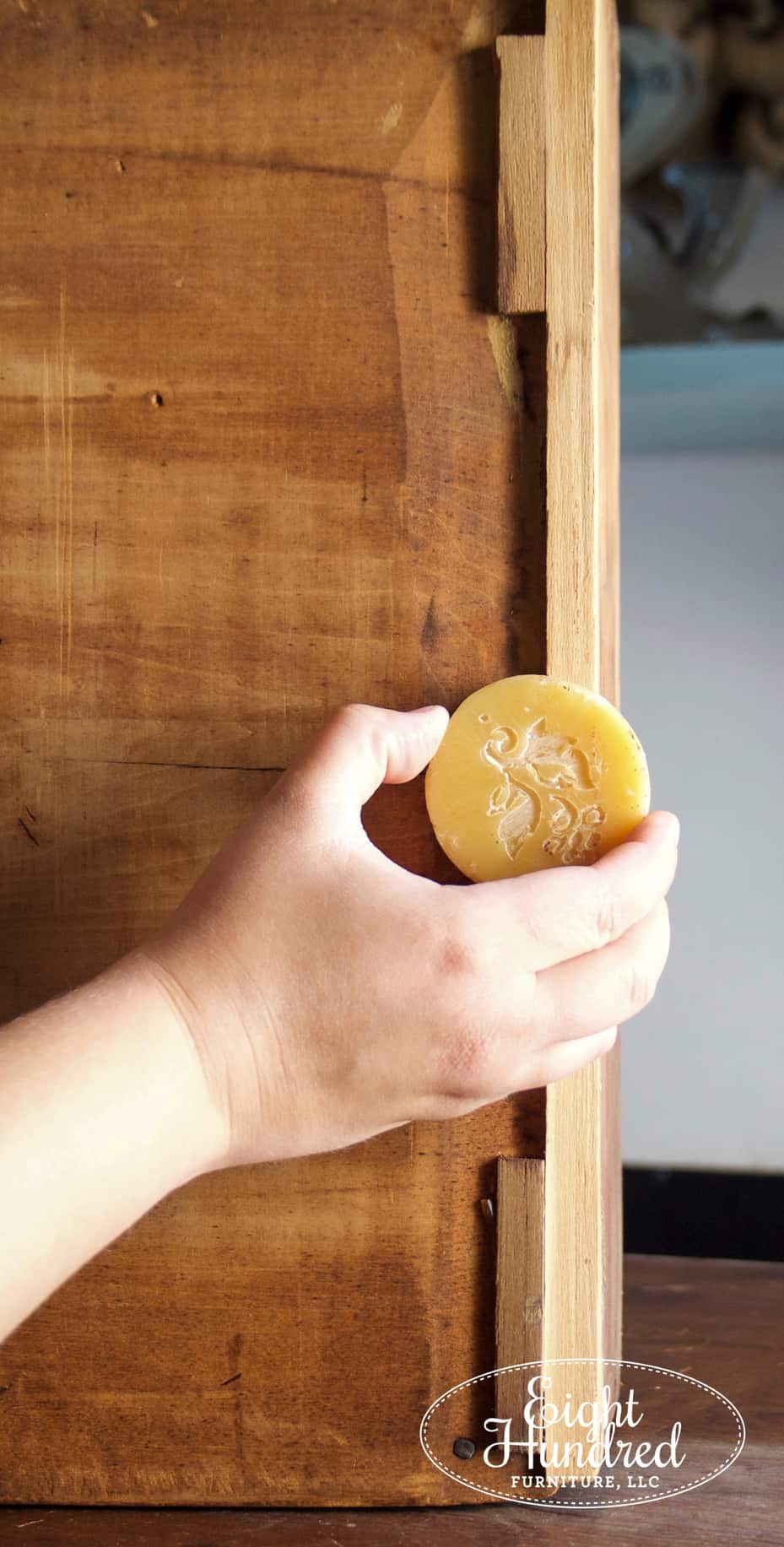 A lot of times, dressers are super dirty on the inside and the drawers don’t work well as a result.  Nails, pieces of wood, pennies, bobby pins, or even Legos can get wedged back in there and keep them from working normally.  A simple vacuuming, a quick wipe down, and a few passes with a Wax Puck all make a big difference in how easily old wooden drawers slide in and out. 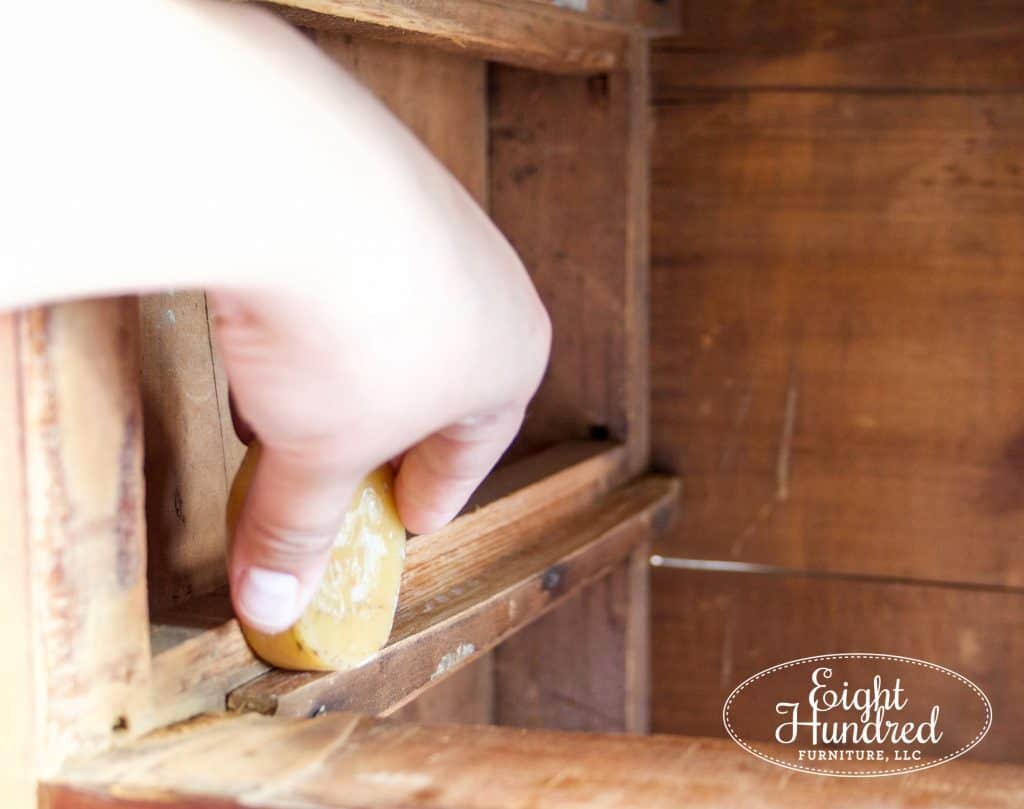 After the drawers were waxed, I poured some of Miss Mustard Seed’s Hemp Oil out into a cup and began hydrating the gorgeous pumpkin pine. 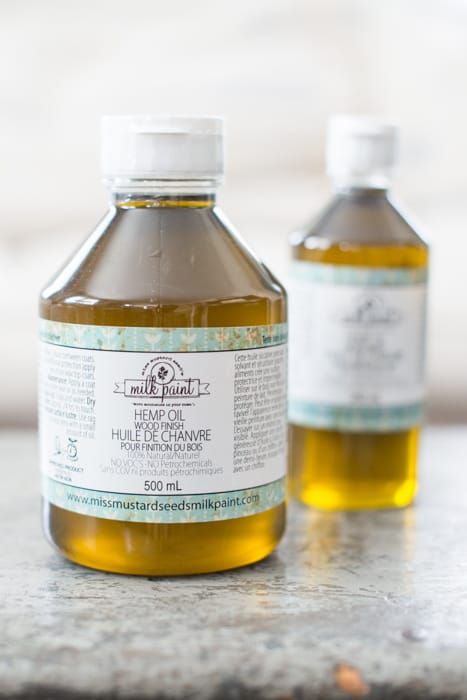 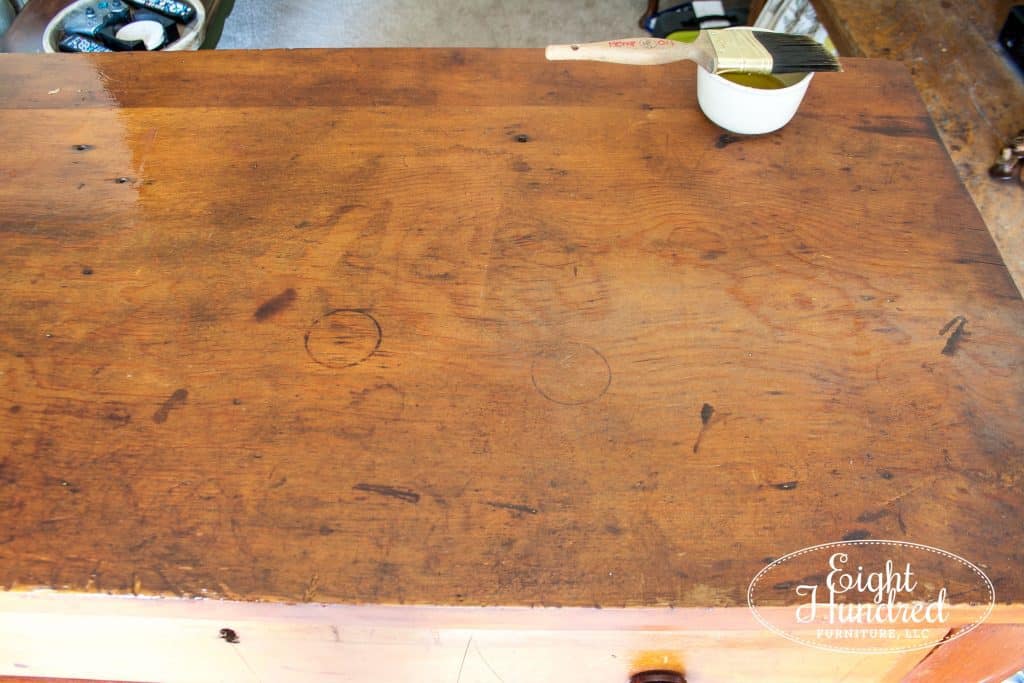 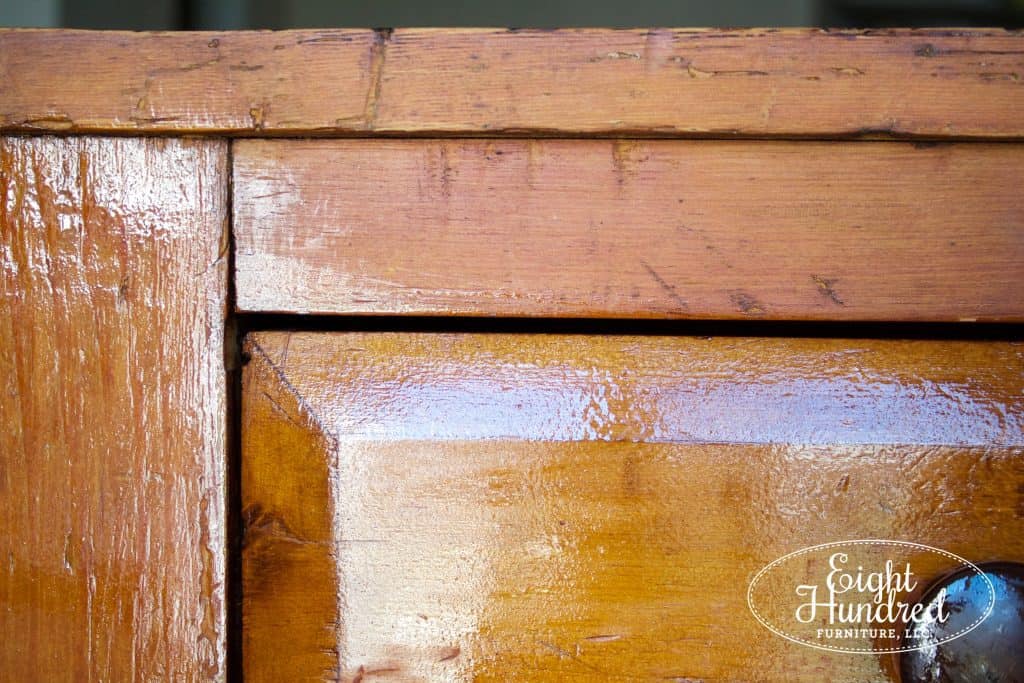 This is a good shot to show you how the color of wood deepens and gets richer when you apply Hemp Oil over it.  The left side is untreated and the right side has Hemp Oil on it.  Can you see the difference? 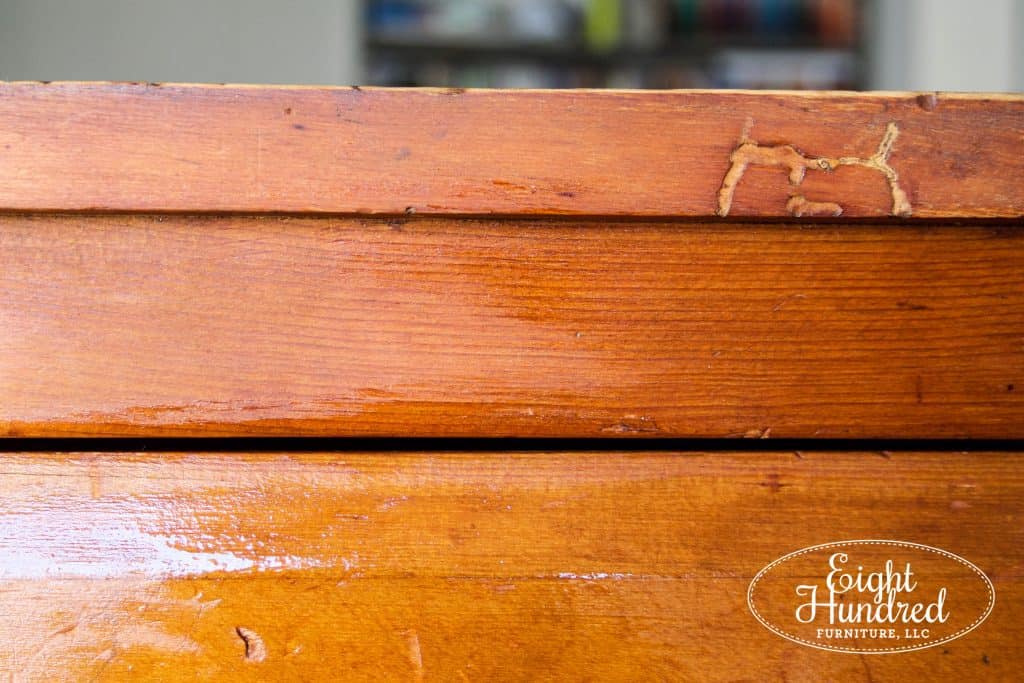 Some of the knobs needed to be glued back on as well, so I took care of that but you don’t really need to see photos of wood glue, do you?

Once the dresser was hydrated and put back together, I staged it with two carriage lamps and a burlap wreath that I made years ago. 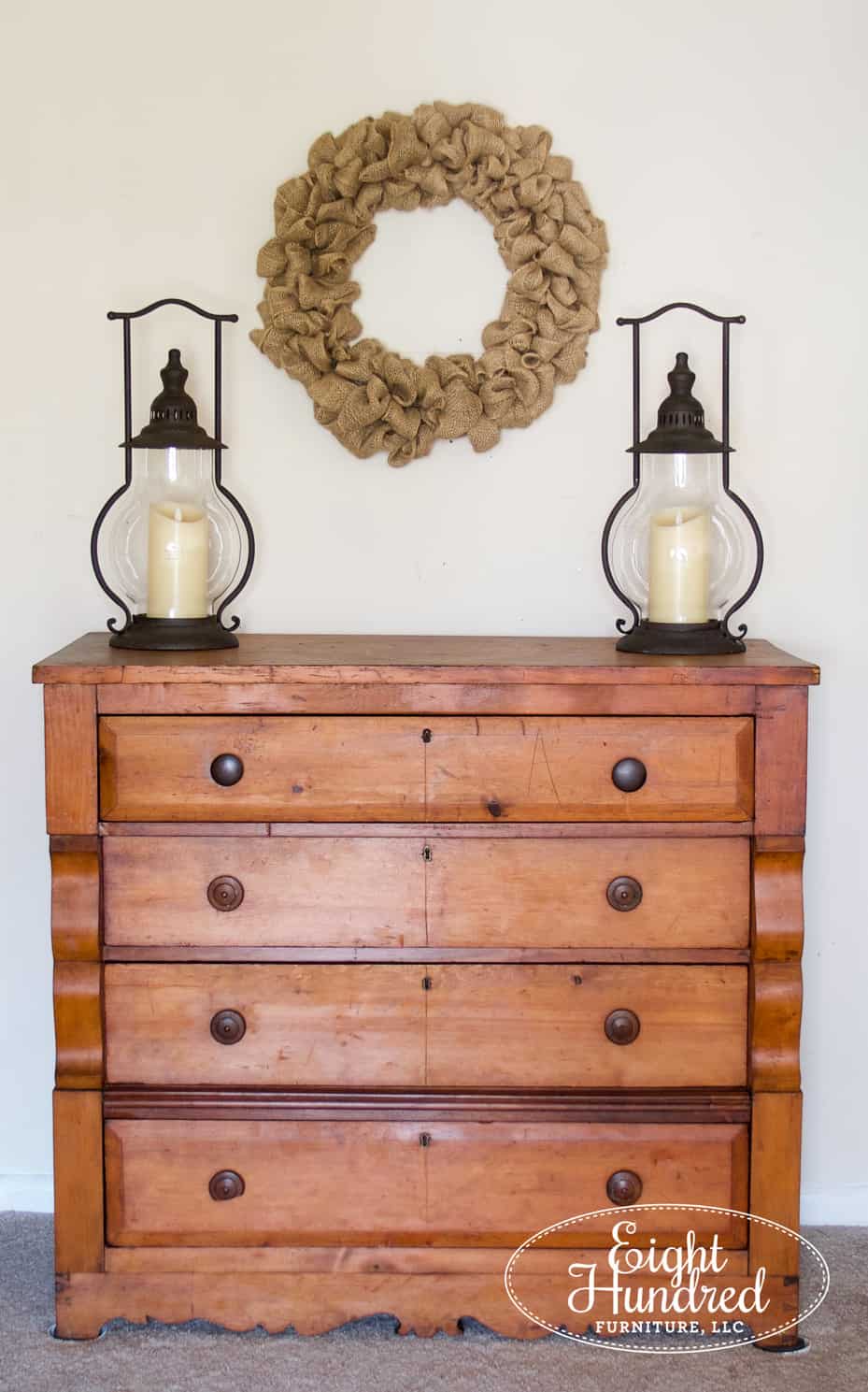 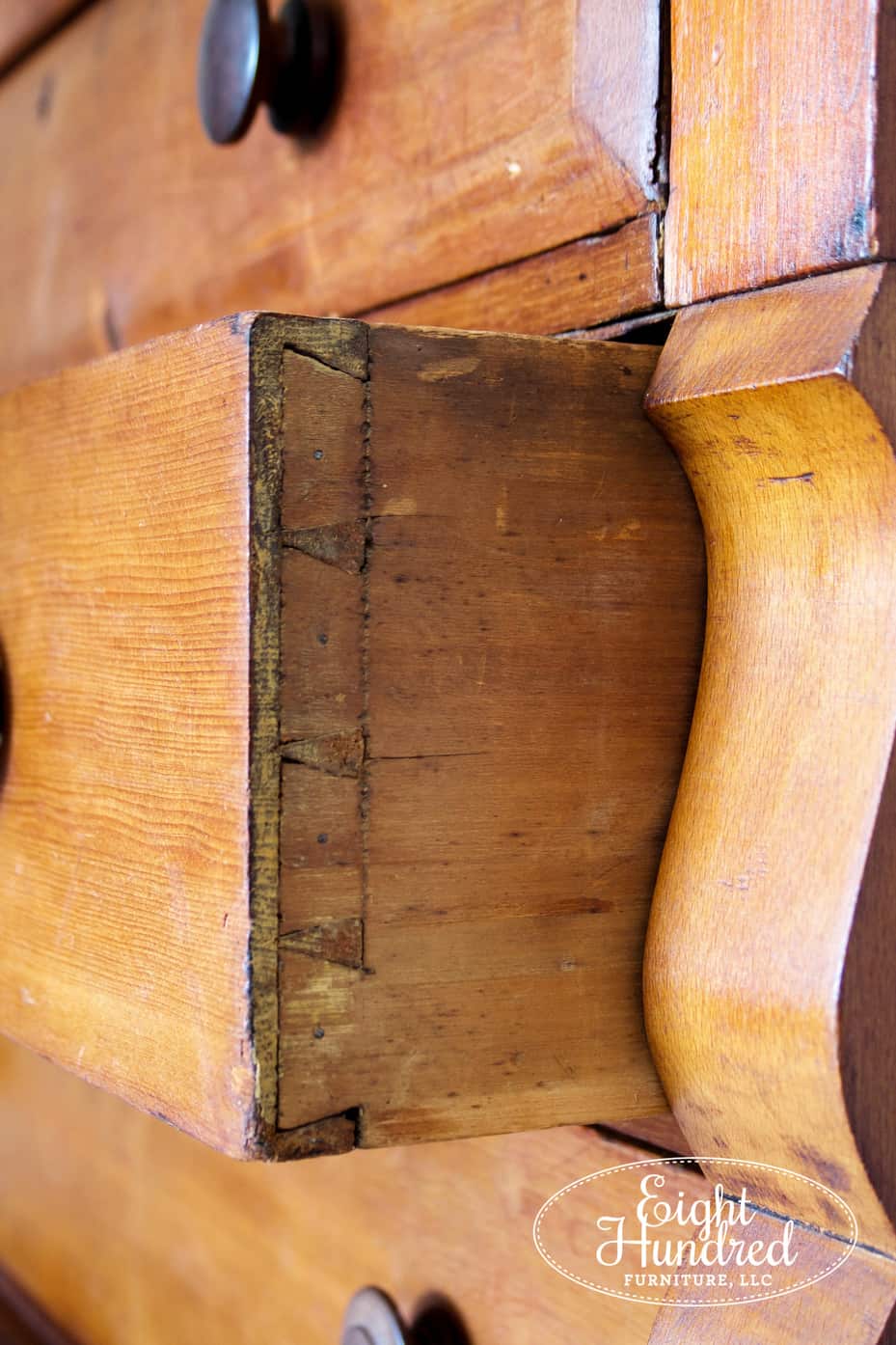 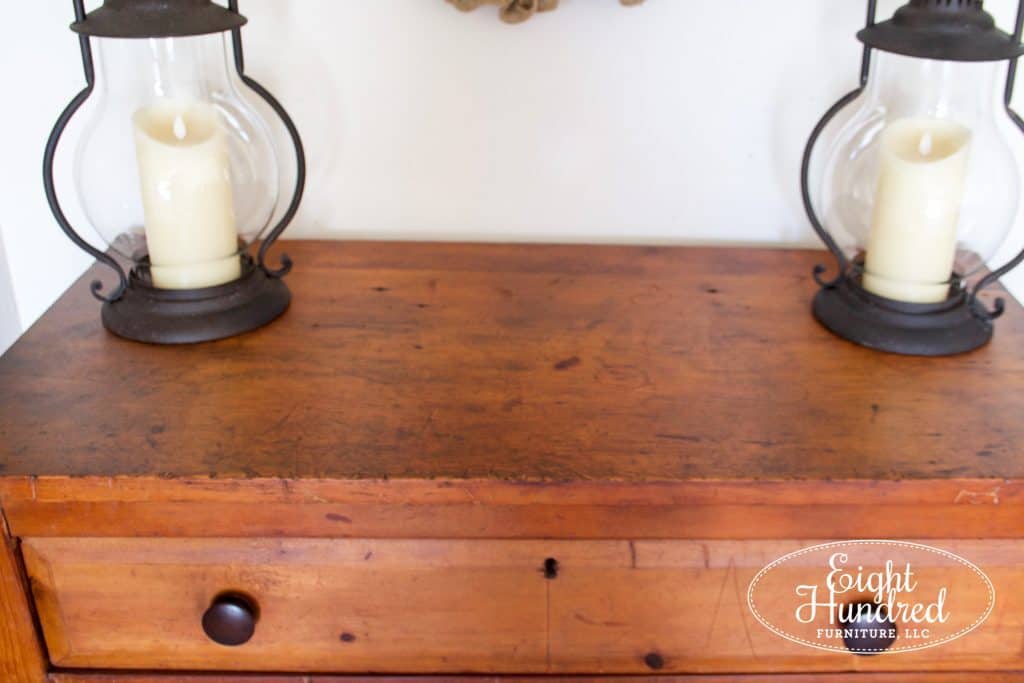 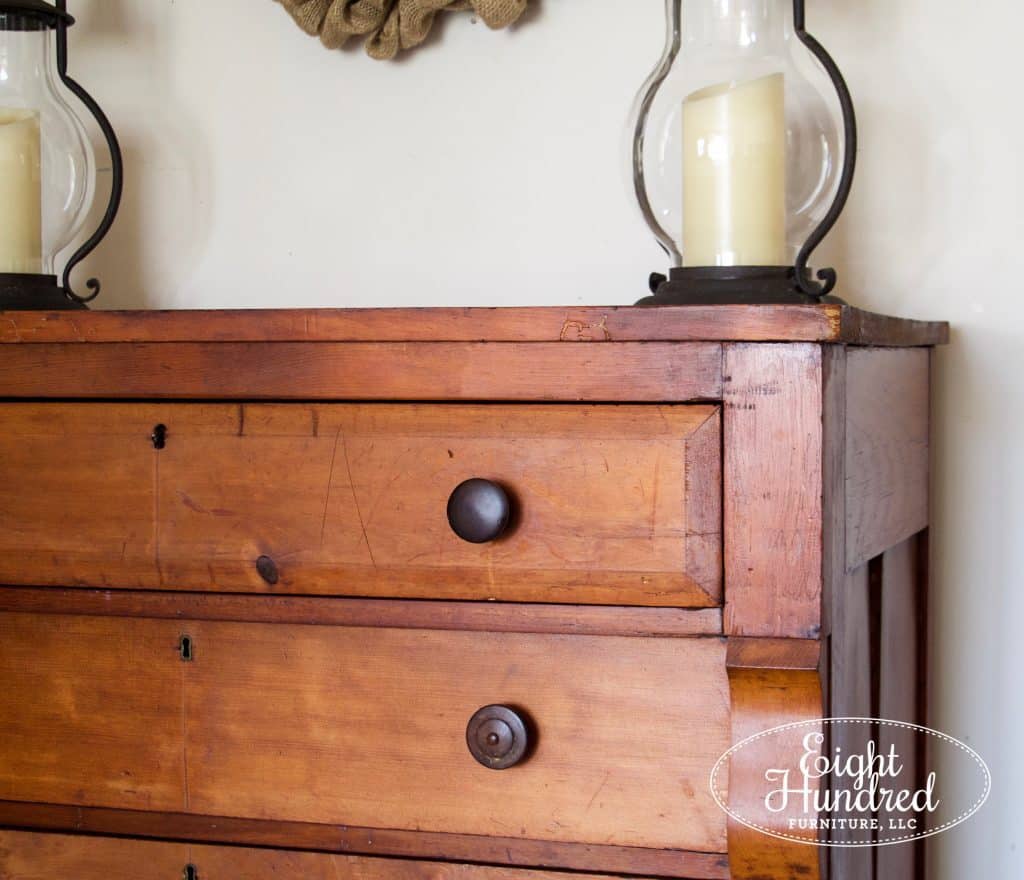 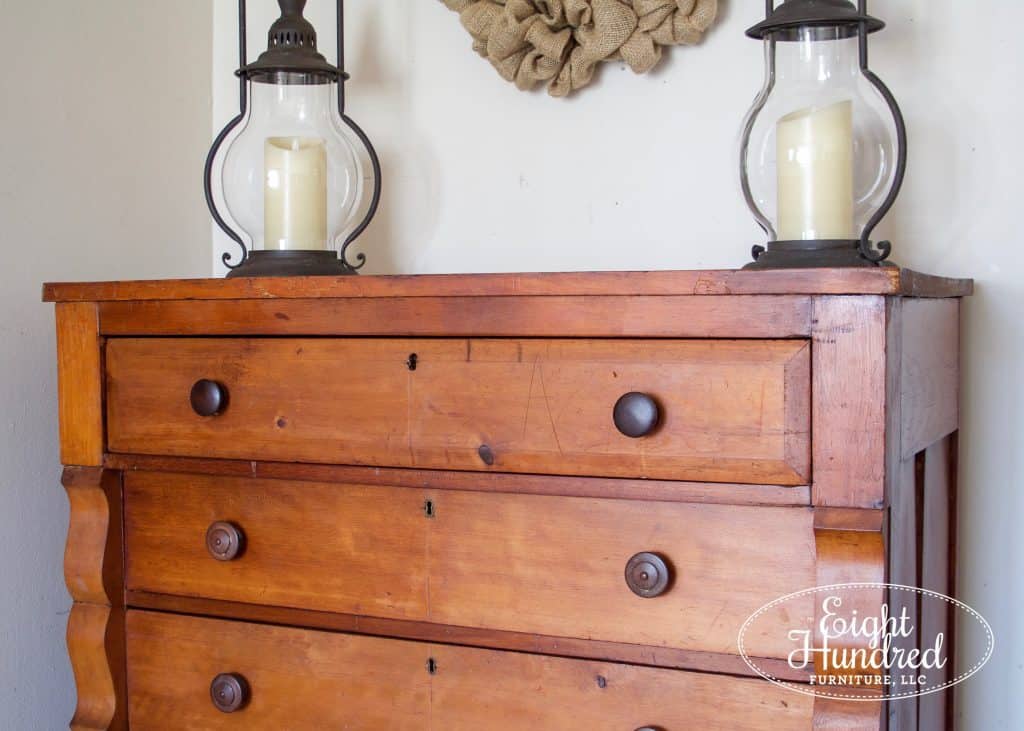 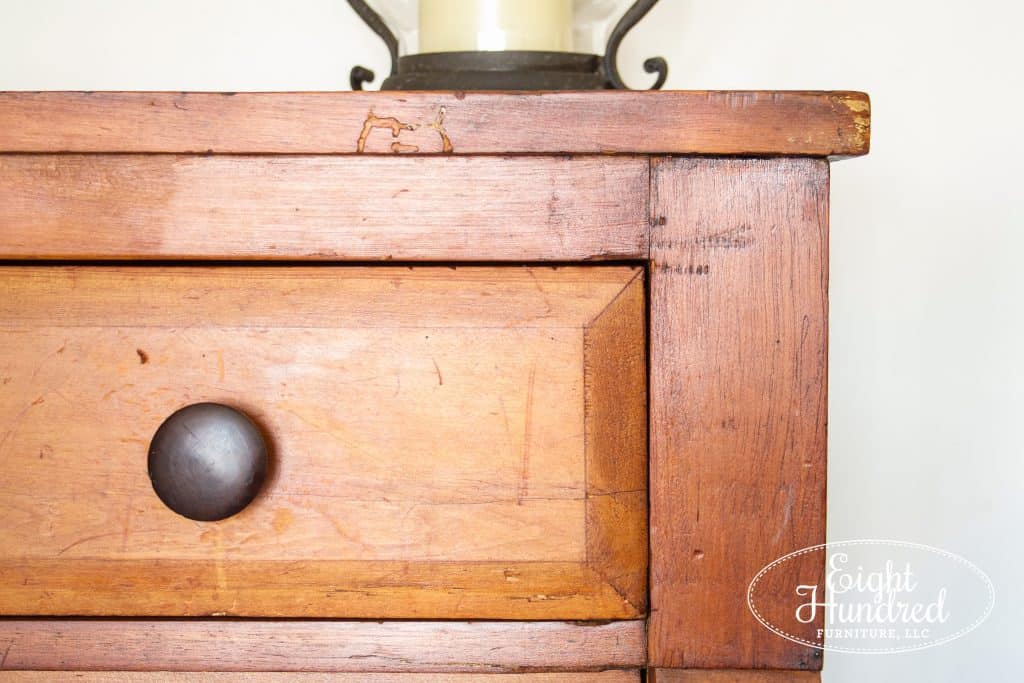 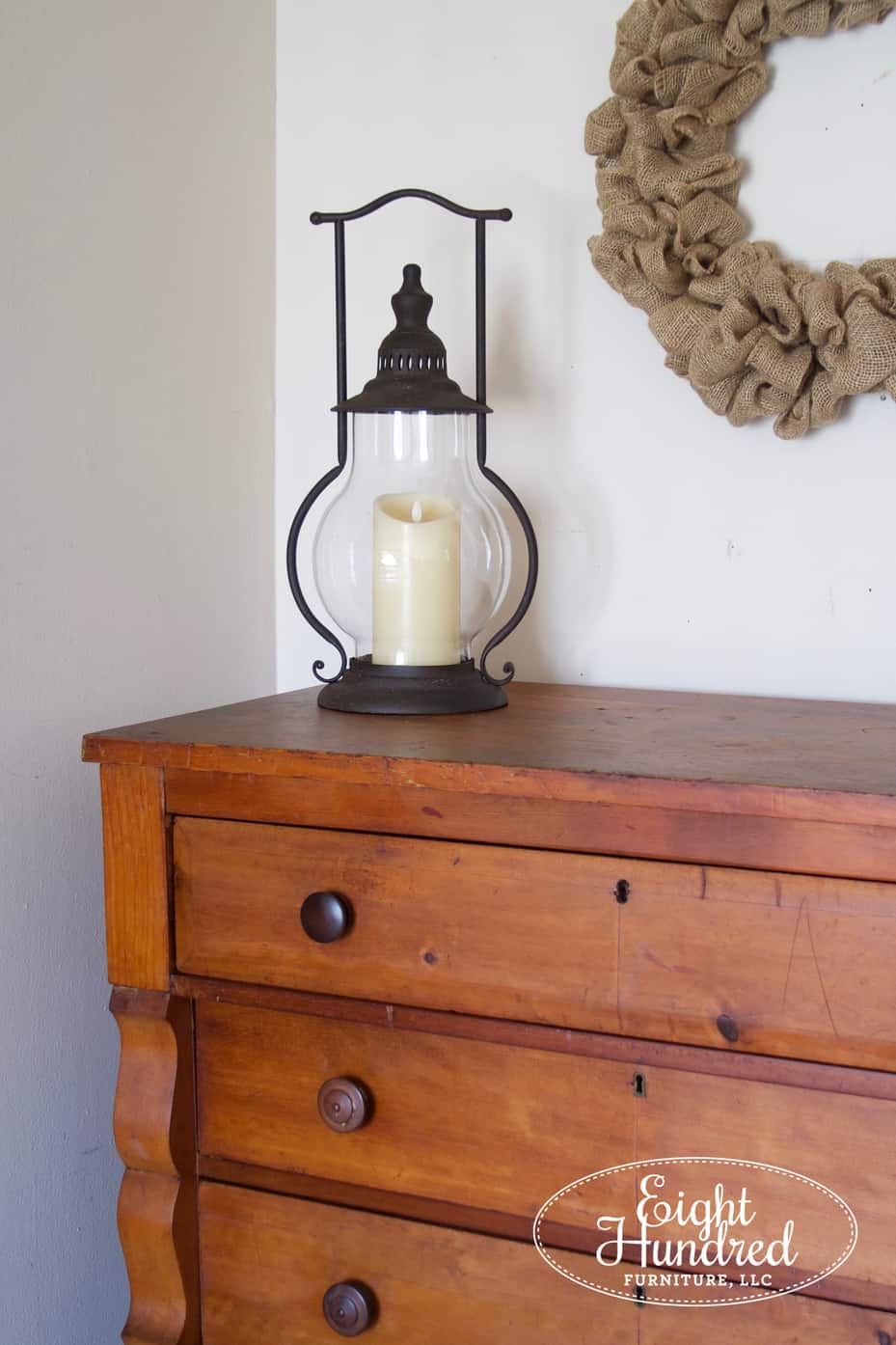 Marc and I took the dresser over to Morgantown Market this afternoon.  My sheet music dresser sold this weekend, so I had an empty spot in front of my Farmhouse White mantle. 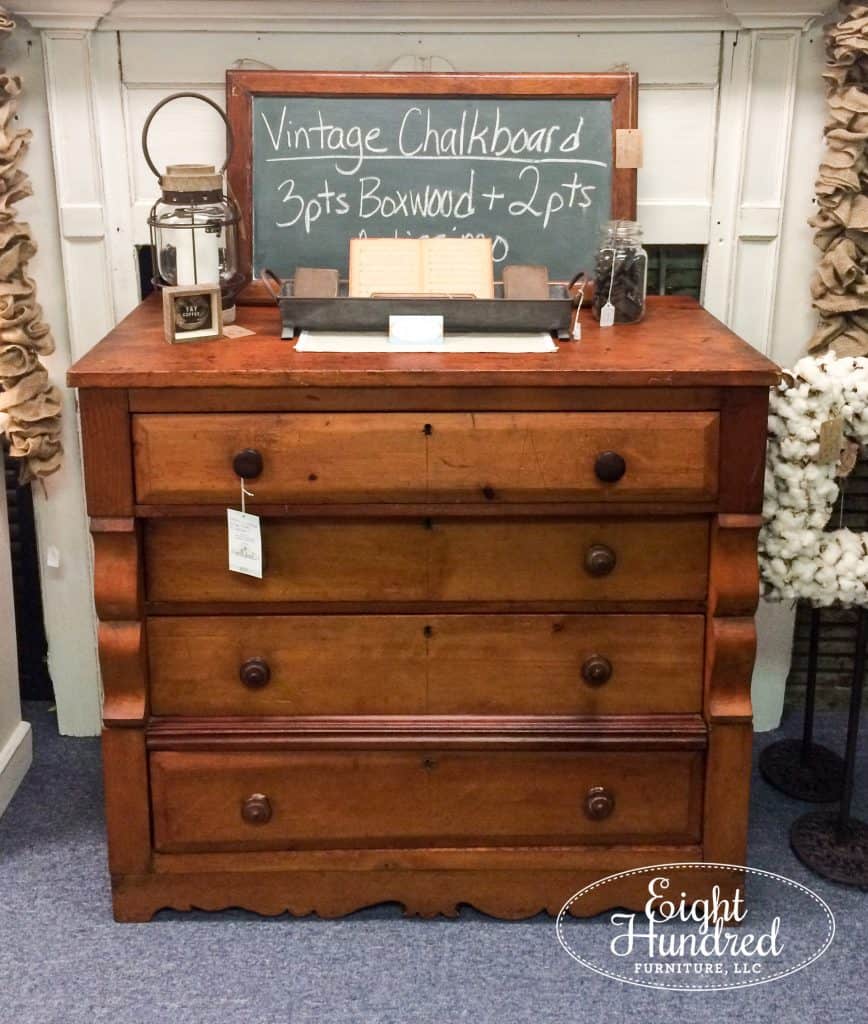 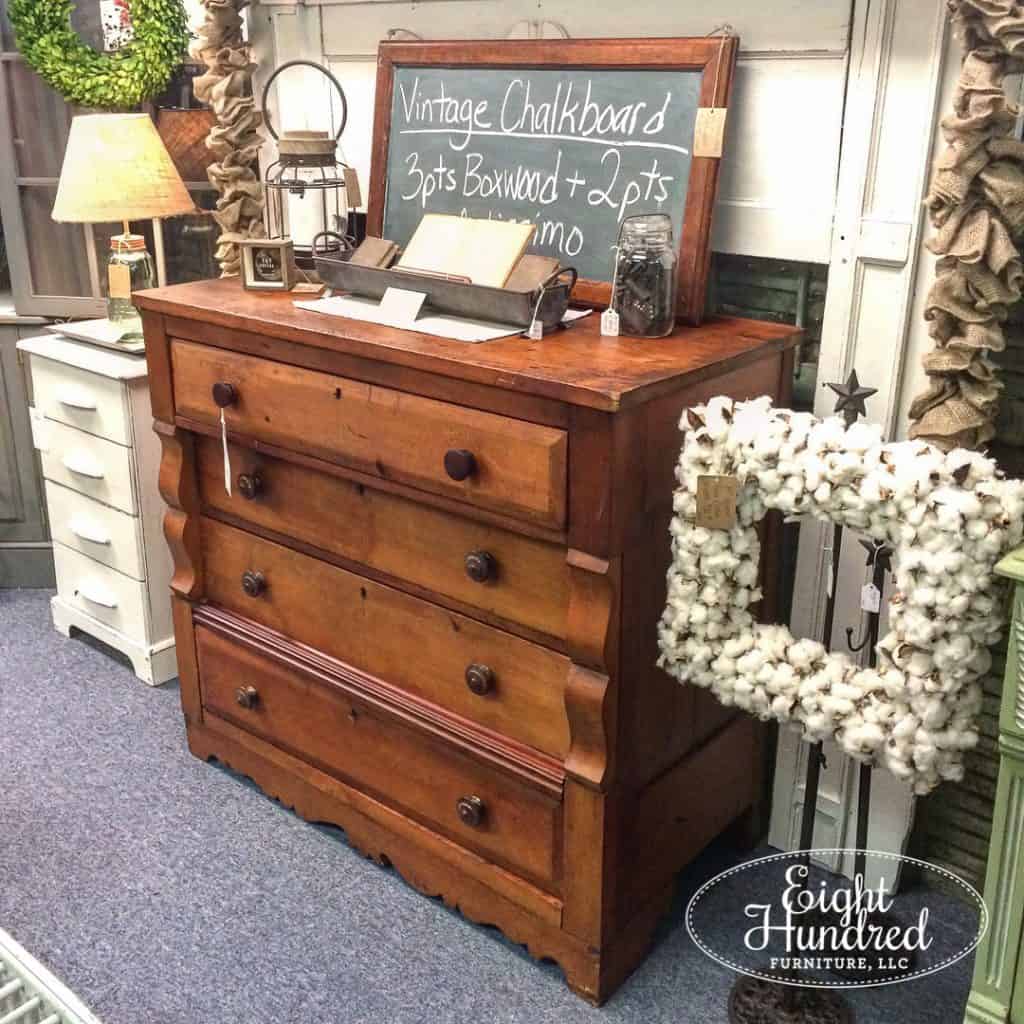 It was the perfect piece for my Milk Painted vintage chalkboard window and some other treasures. 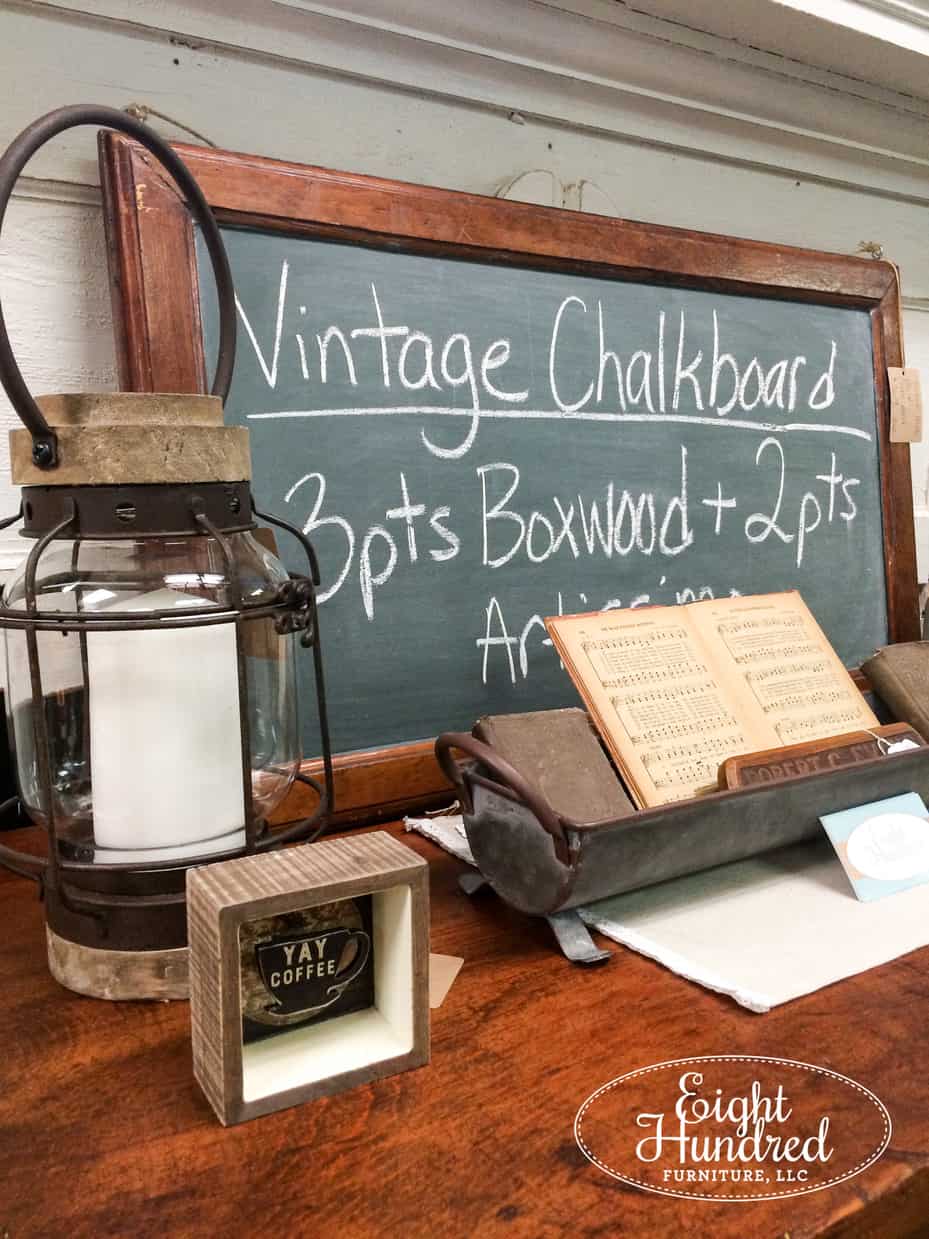 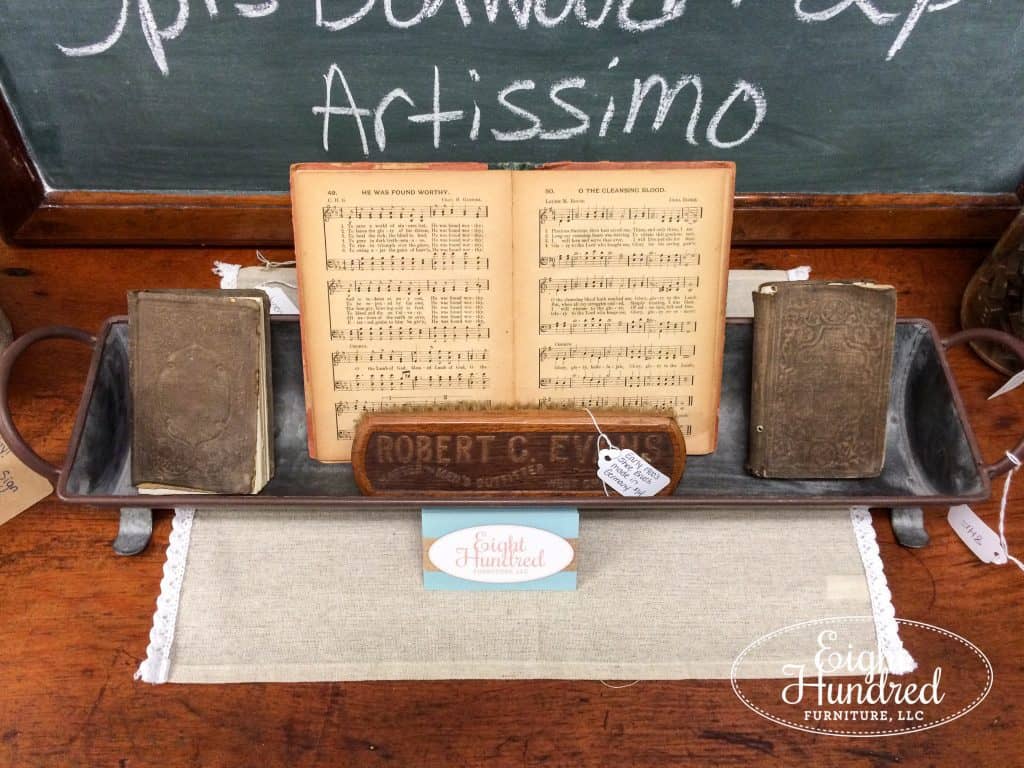 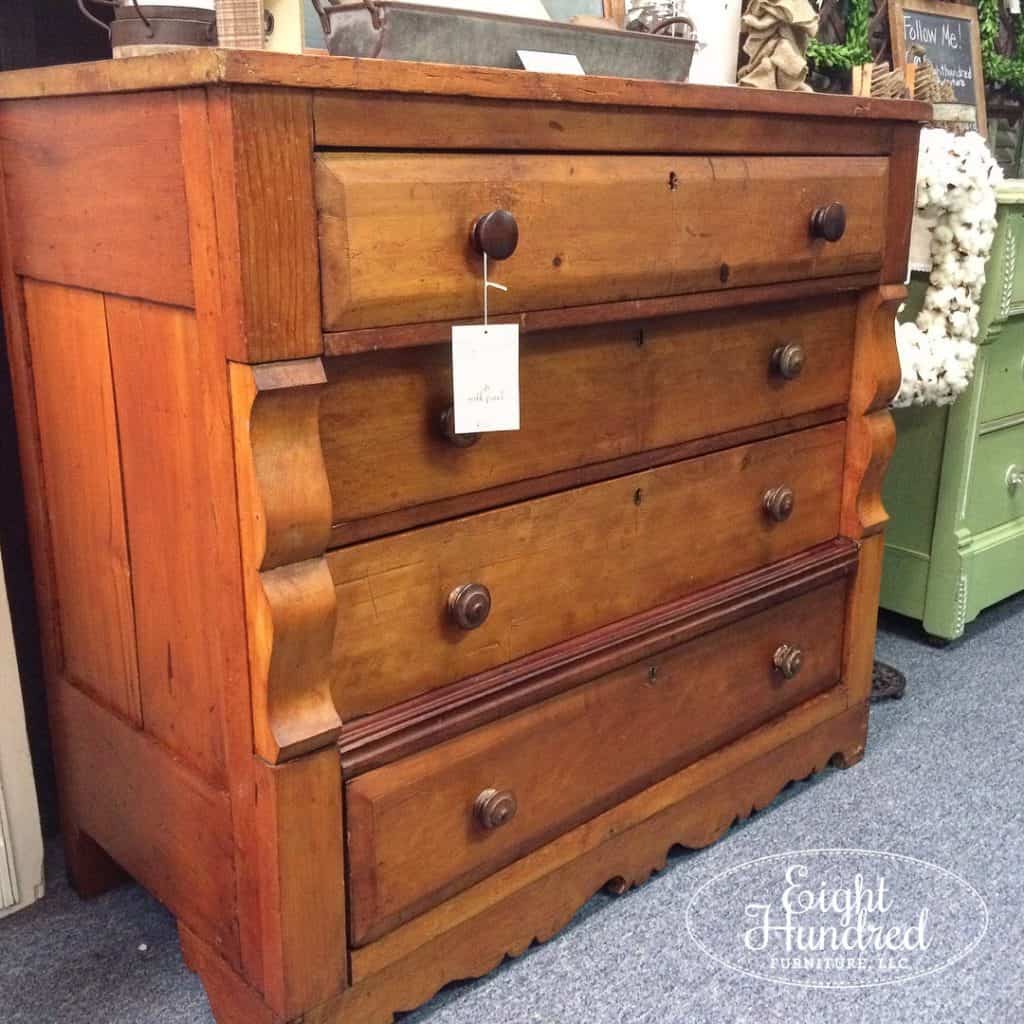 This piece is $325 if you’re interested!  You can visit it in person at Morgantown Market.