Do you remember when I found a few pieces of furniture on the side of the road with a big ‘ol “FREE” sign on them?  This was my face when we hauled them home.  As you can see, it was back before the ground was covered in powdery snow! 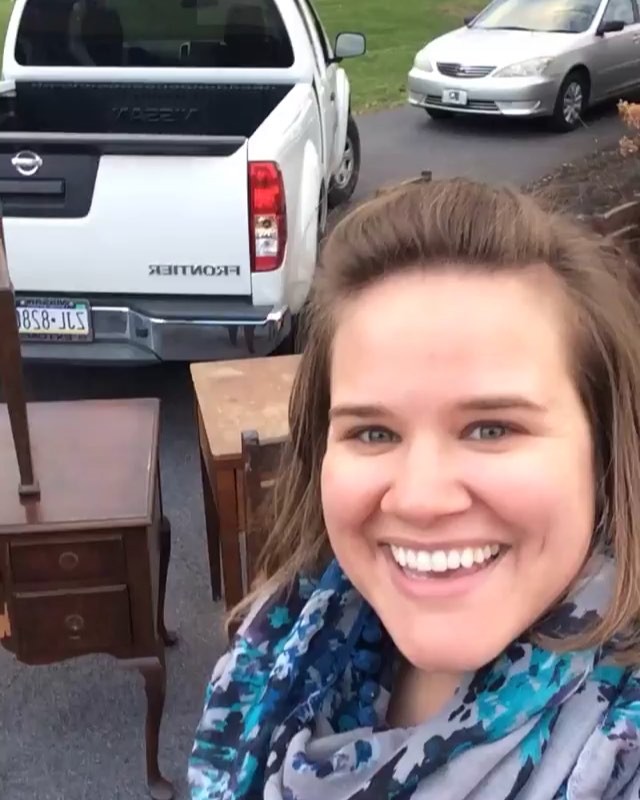 Well, in that pile of goodies were six antique dining room chairs.  They all have a lovely straight shape and they were pretty sturdy. 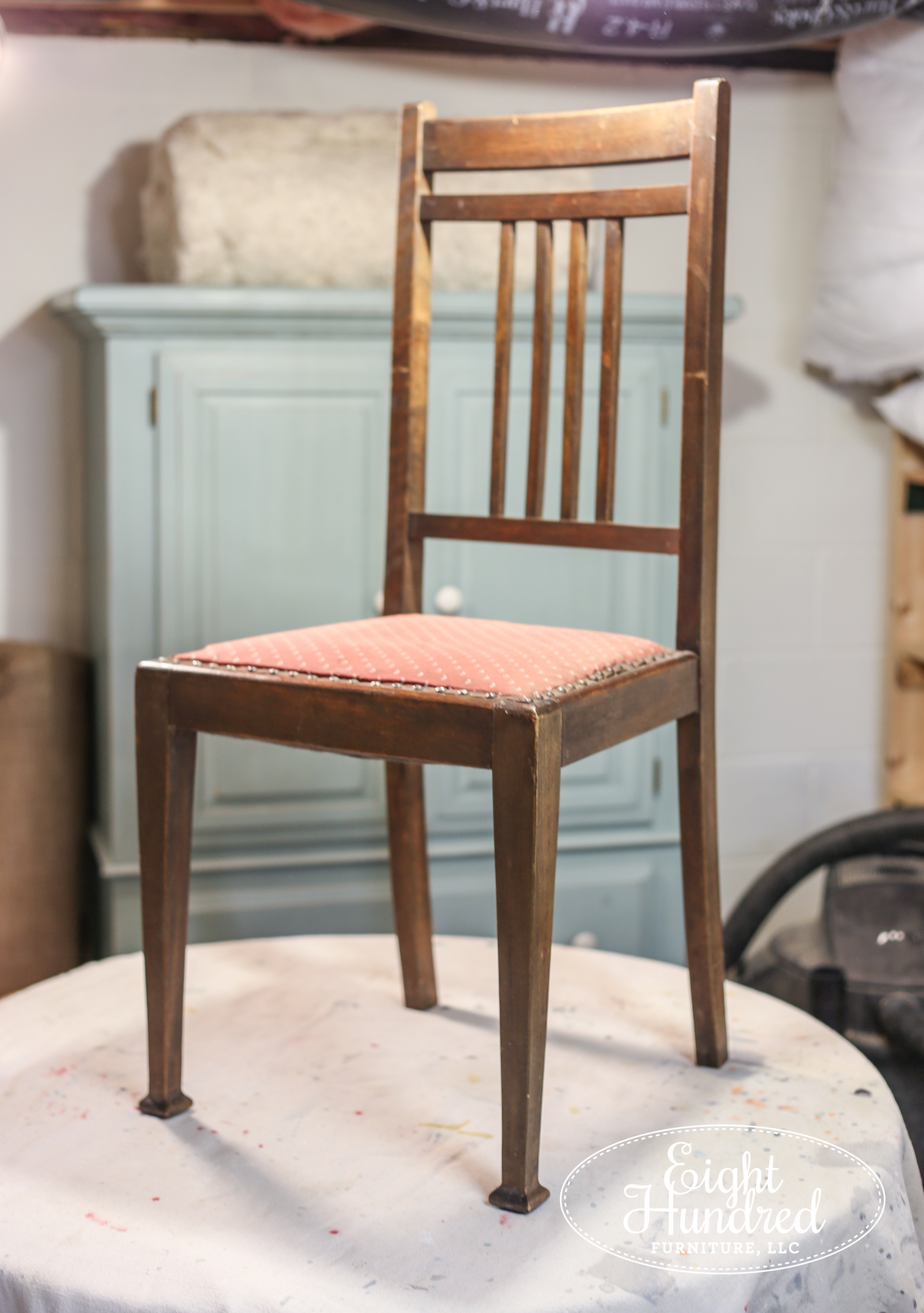 I started the tear down process  on one of them in between other projects in the workshop.  The seats aren’t particularly thick, so there wasn’t much material to remove.

First, I carefully pried up all of the decorative nails on the trim. 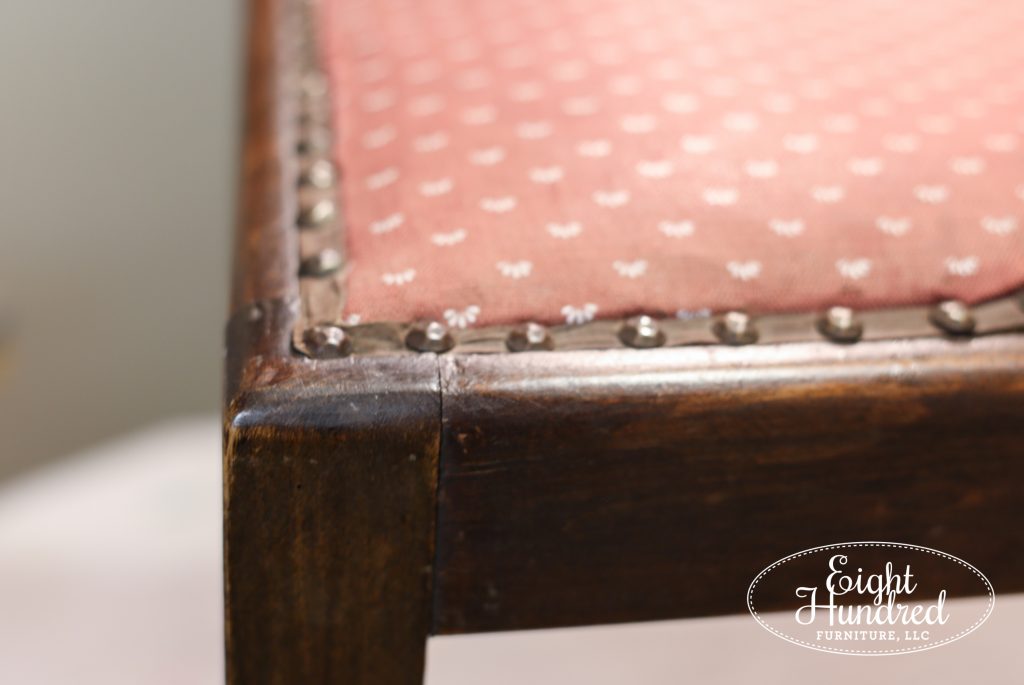 These were placed on individually, so I made my way around the chair, carefully removing each one.  They are really pretty and I wanted to save them in case I need them down the road at some point.  As I was plucking them up, I tried not to bend them.  A flathead screwdriver was all that was needed to wiggle under the nail and pop it out. 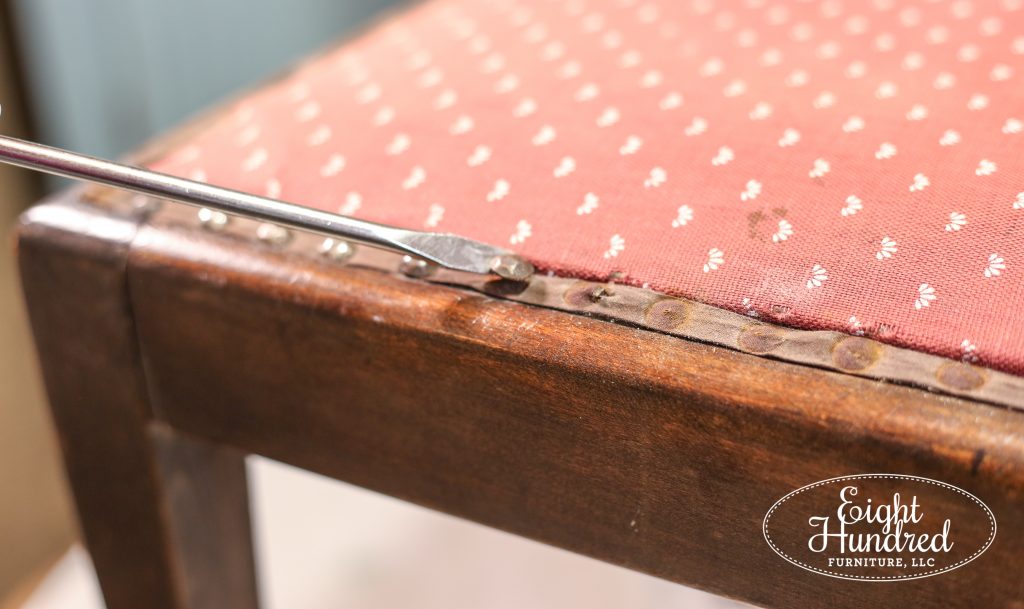 There was quite a pile after just one chair! 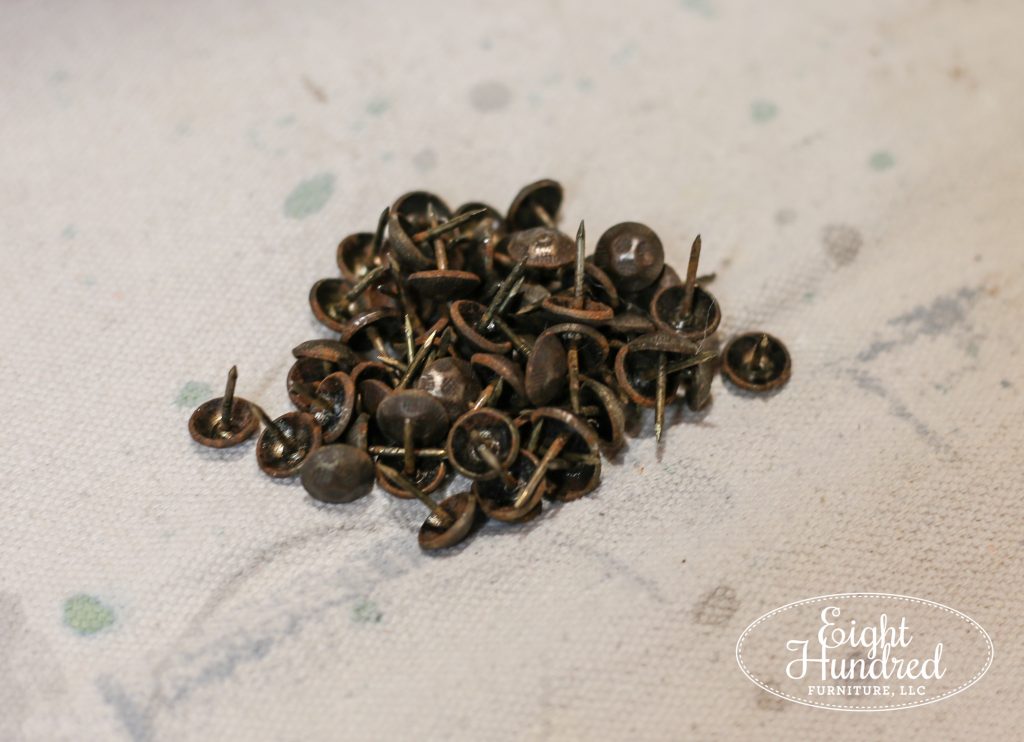 Next, I removed the fabric that was underneath the tacks.  Well, I think it was fabric.  It could have been some type of ribbon, but it was covered in rust from the nails and so dirty from being outside that I couldn’t really tell what it was.  Regardless, it was no match for my pliers and it pulled right up without any issues. 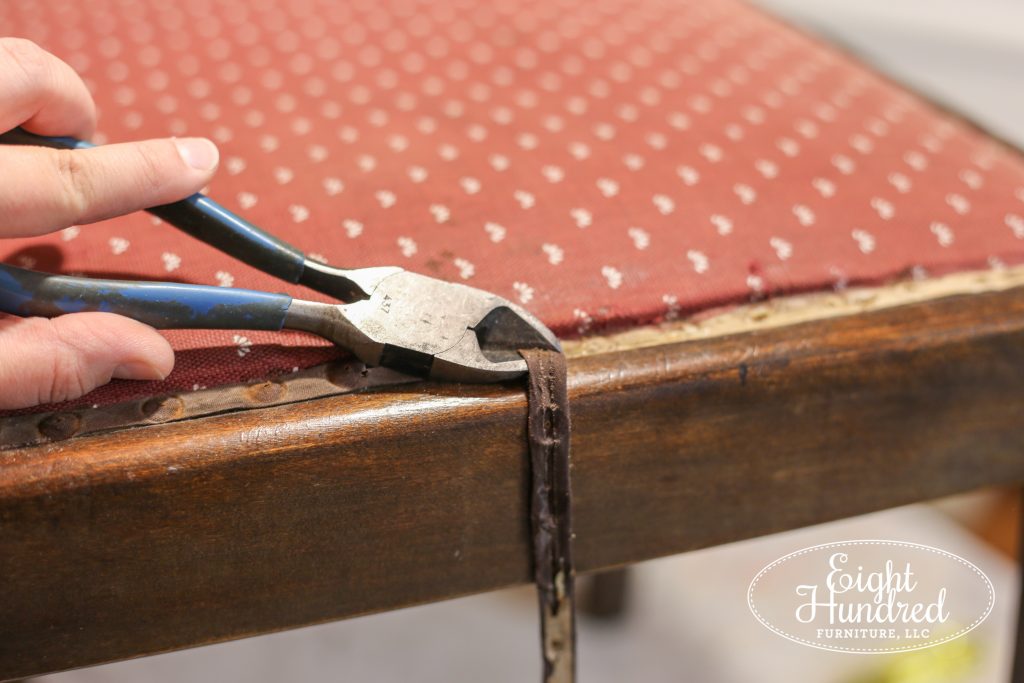 See how dirty it was?  Just imagine a cloud of dirt rising into the air with every stroke and you get the idea! 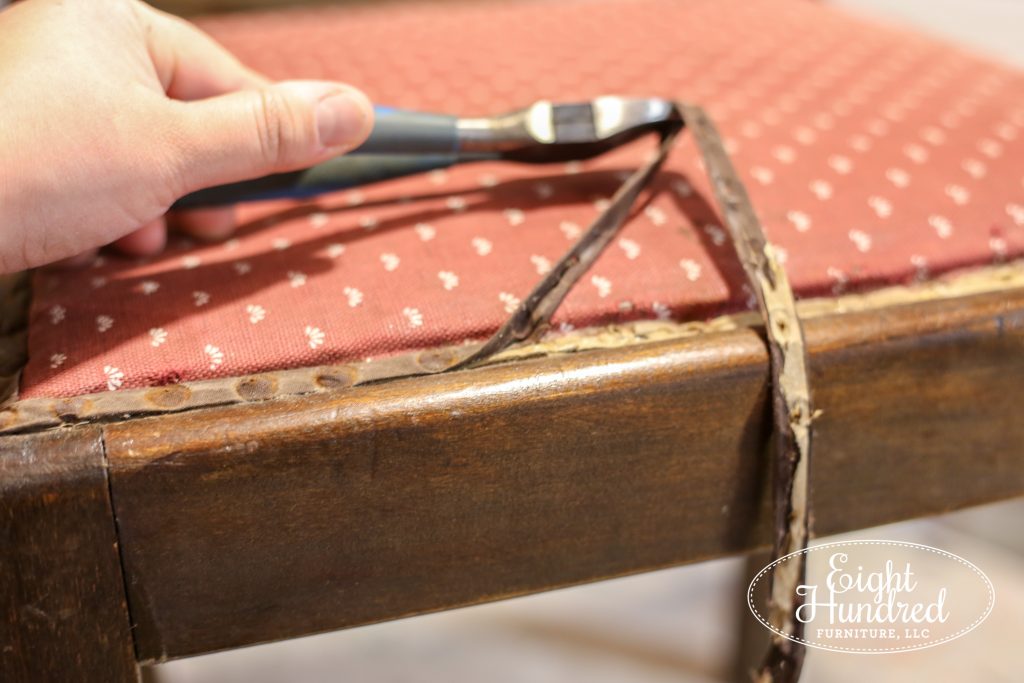 Under that was a layer of cardboard tack strip.  This helped to create a smooth surface for trim.  It was stapled down every half inch or so. 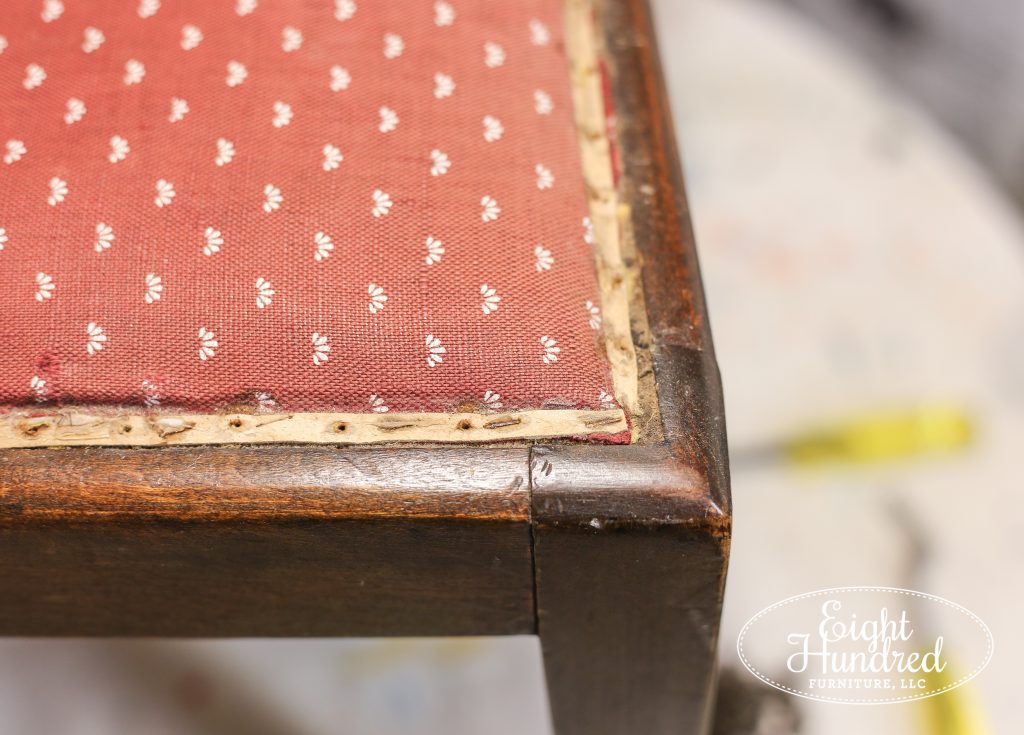 Using my Osborne staple/tack remover, I carefully plucked out each one.  Now I didn’t notice until after I had developed my photos that I had my tool facing the wrong way in the photo below. 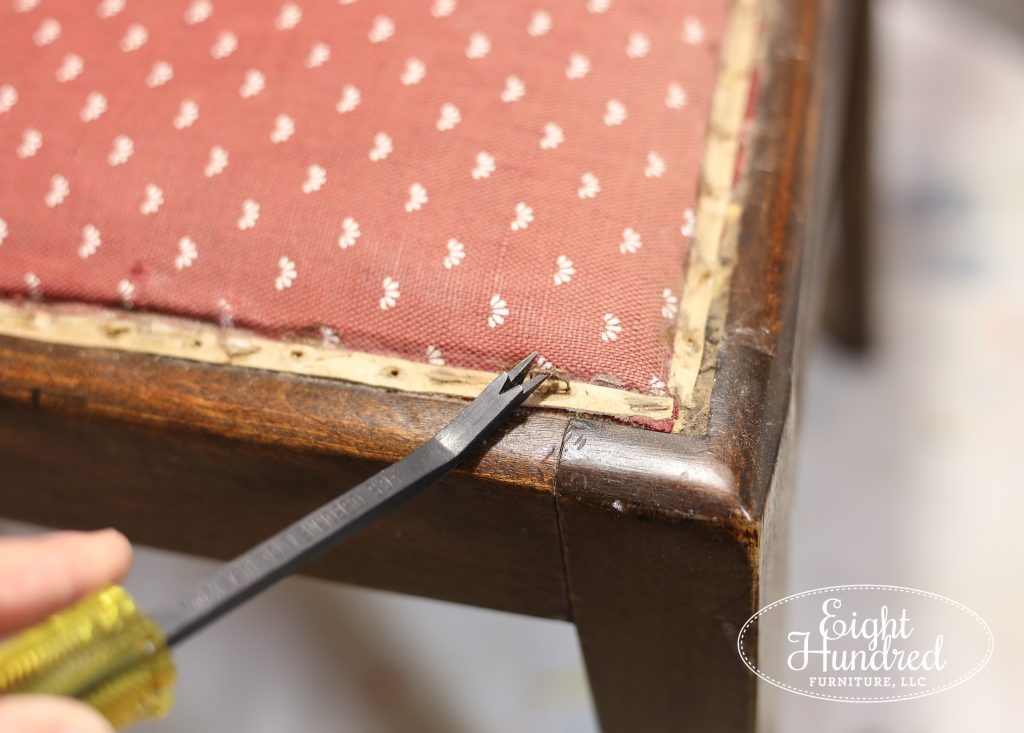 You should remove your staples from the other direction and not rock the tool against the decorative wood.  You run the risk of leaving scratches and creating dents in the surface of your chair.  The reason why I had my tool facing this way is because I was actually taking this photo with my right hand while holding the tool with my left. It was a staged shot, but you get the idea!

Once that was gone, I started lifting the fabric up to see what was underneath. 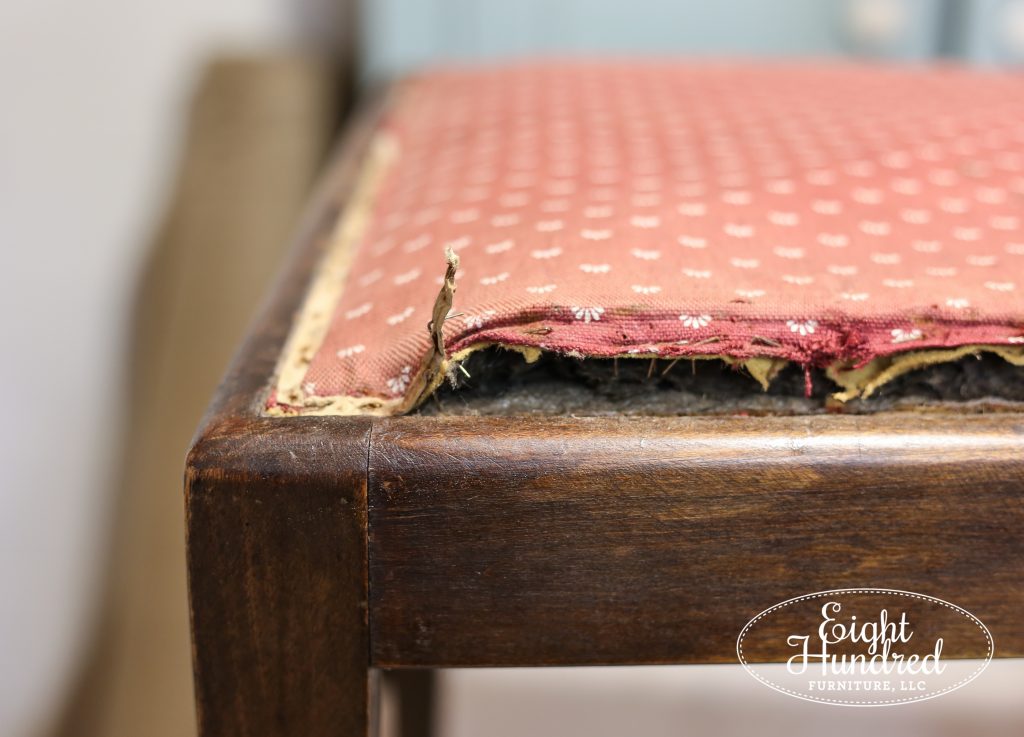 To save my fingers from the rusty staples, I used my Osborne Ripping Chisel to lift the fabric up. 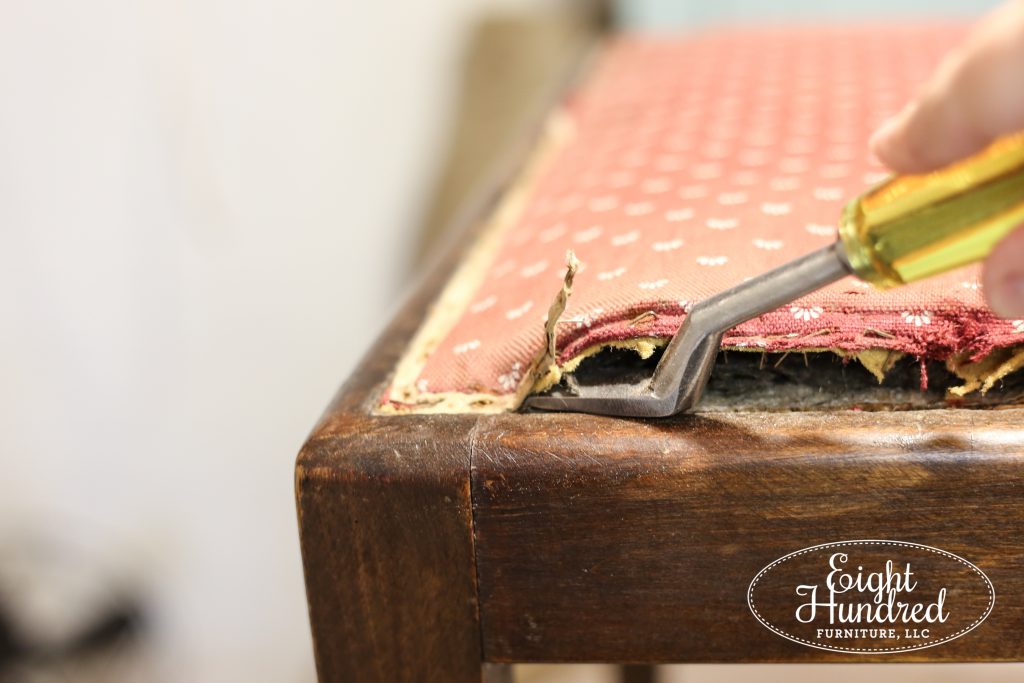 I found a layer of leather, then thin foam, some sort of padding, synthetic burlap, jute webbing, and finally the cambric dust cover.  The tear down continued as I removed each layer and the corresponding staples holding each one in place. 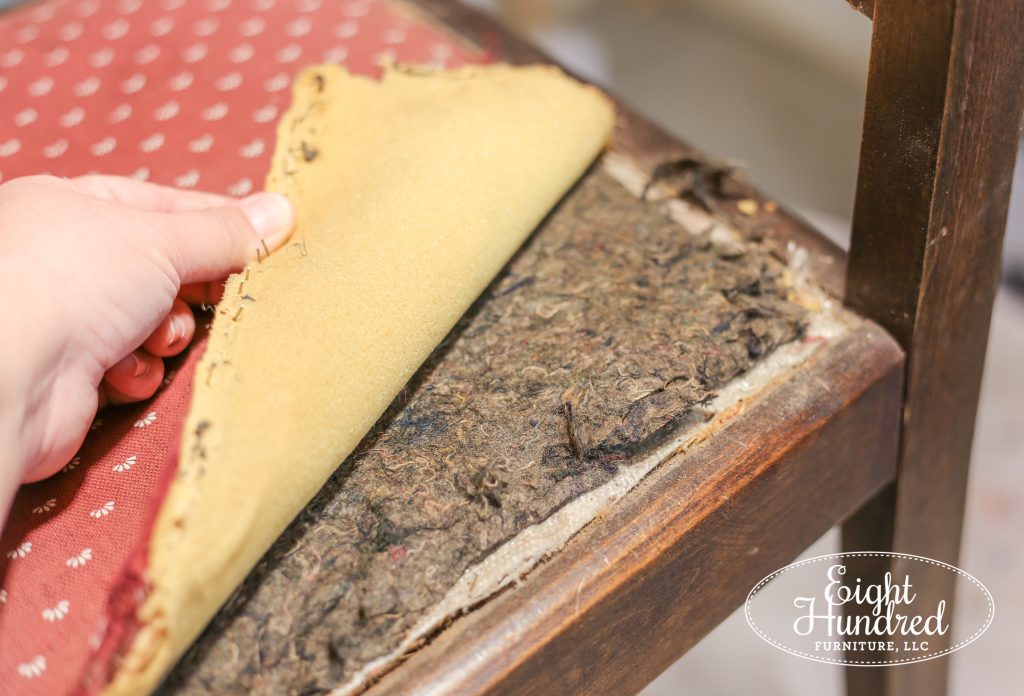 The result is a bare frame that is ready to be scuffed and painted with some beautiful shade of Miss Mustard Seed’s Milk Paint!

One down, three more to go!

I’m stepping “out of the office” for the wee

Sometimes I think my pieces smile back at me when

"Hey Jenn...what's the difference between the brow

Glaze Effects by @generalfinishes are translucent

I come back to this quote from @jenniferallwood’

My latest piece is fresh from the workshop! This s

My go-to paintbrushes! If you’re looking for a q

Sometimes I think my pieces smile back at me when

"Hey Jenn...what's the difference between the brow

Glaze Effects by @generalfinishes are translucent

I come back to this quote from @jenniferallwood’

My latest piece is fresh from the workshop! This s

My go-to paintbrushes! If you’re looking for a q

These are the details that make me fall in love wi