Marc and I picked up two depression era dressers from Lancaster last week. They were offered to me by a very sweet and generous follower on Instagram. They have the usual beautiful features that are common on pieces from this era. 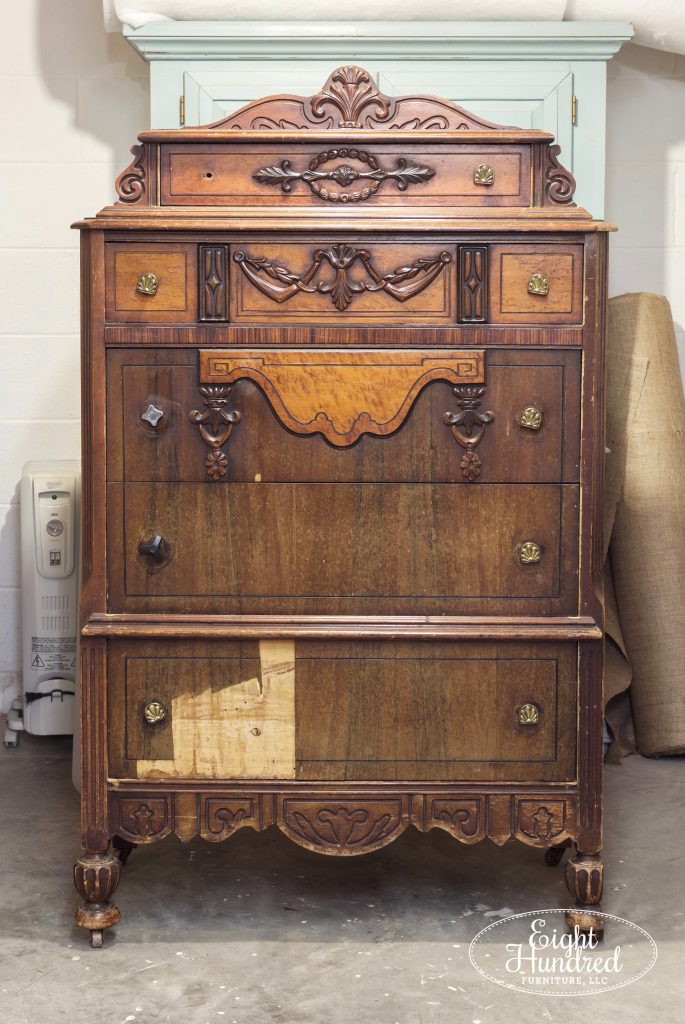 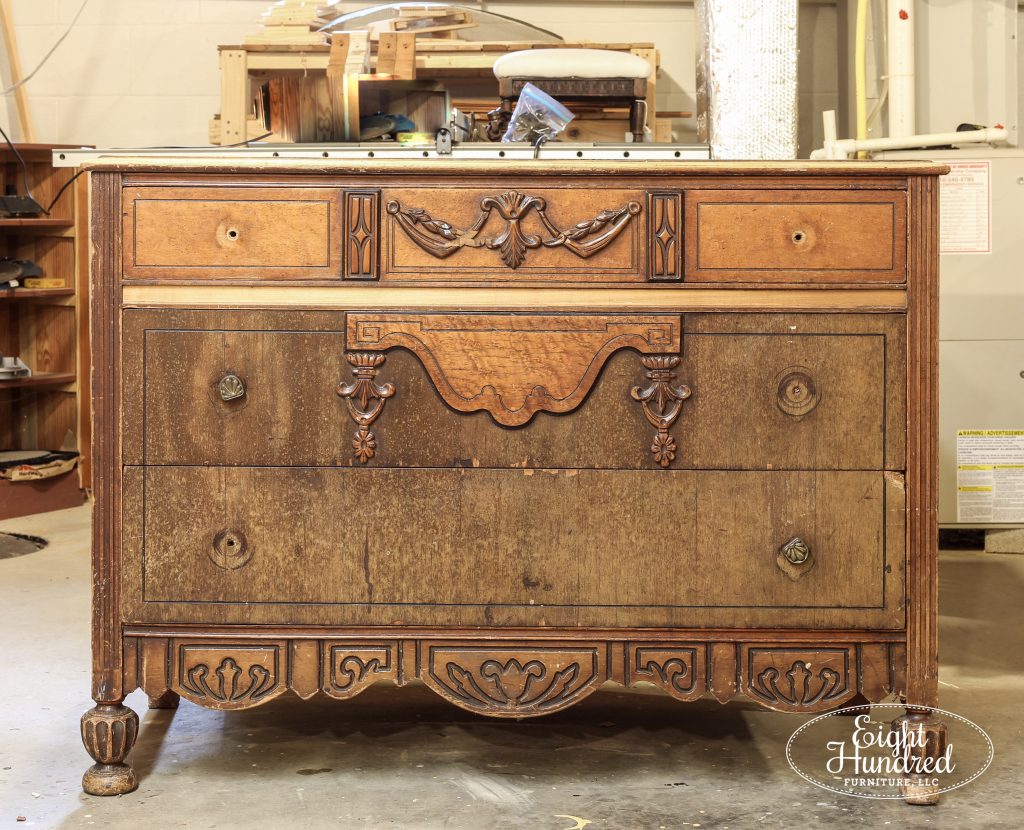 They’re definitely beautiful, but upon closer inspection, they needed a good bit of prep work to get ready for a paint makeover.

Prep work. That’s a term that has become a bit taboo or unspeakable in the furniture painting world. People don’t seem to want to prep furniture anymore, and I strongly recommend that you do not fall into this no-prep work wanted way of thinking. Prep work ensures that your finish will last for years and will hold up to life’s wear and tear. Skipping the prep stage kicks open the door to a host of potential problems such as bleed through, cracking, peeling, yellowing, damages, structural issues and safety hazards.

(Steps down from soapbox)

So now that my prep push is over, I’d like to share the process that I went through on these two pieces the other day to get them ready for their makeovers.

I started evaluating the taller dresser first. Depression era furniture like this doesn’t have knobs shaped like these (and clearly the two on the left don’t belong). 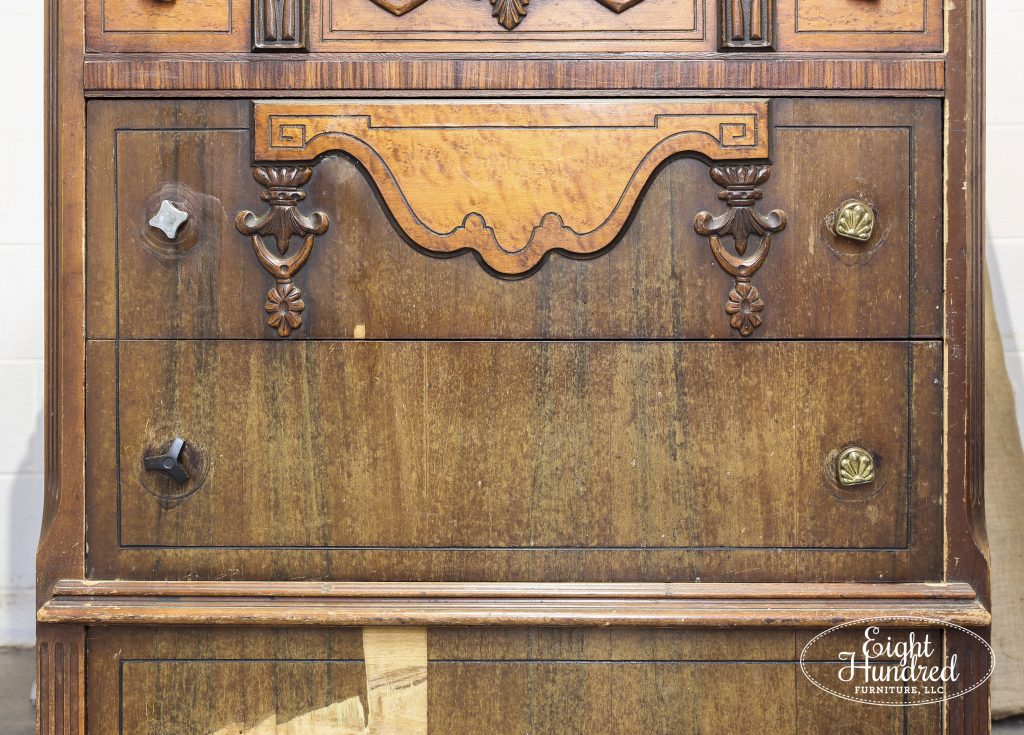 There was water damage on the bottom drawer, causing a large portion of the veneer to buckle. I was able to lift it off effortlessly with my fingers, hence the big ‘ol bald spot. The veneer on the bottom drawer would have to be removed because there was too much damage to repair. 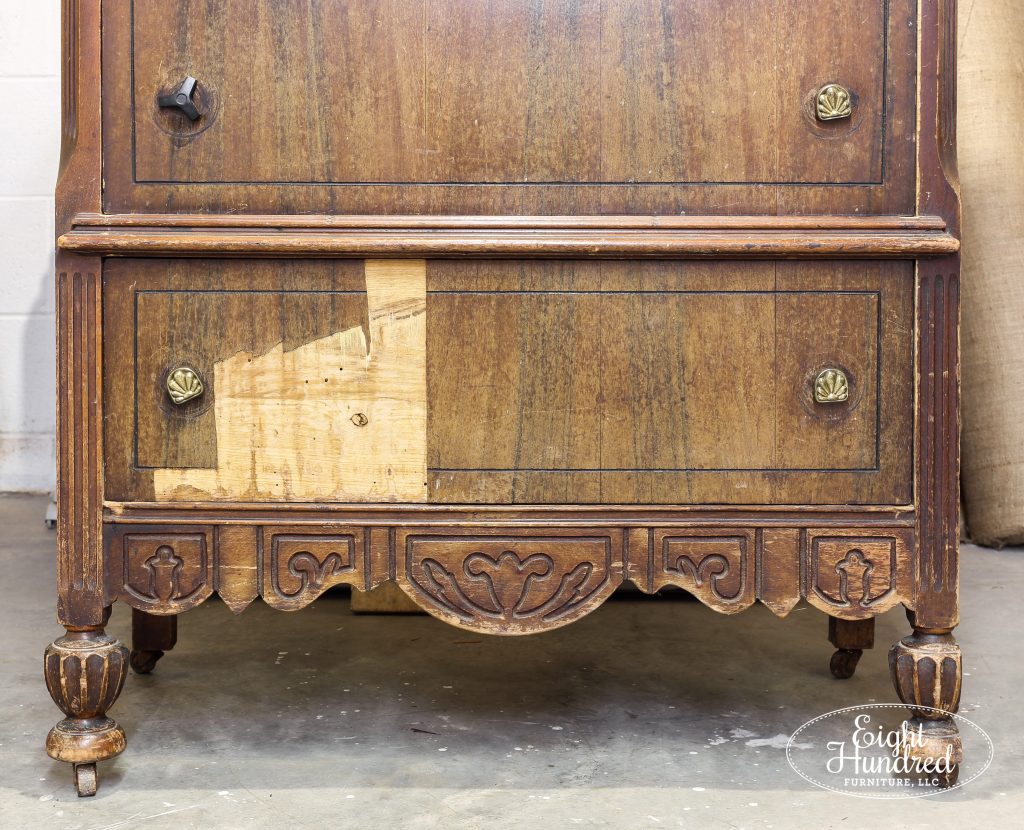 A chunk had come off of the leg and needed to be glued back on. That was easy enough, and this kind of damage is common with depression era furniture. The round accents on the feet are easy to chip off if the piece has seen some wear and tear over the years. I was lucky that this piece was saved! 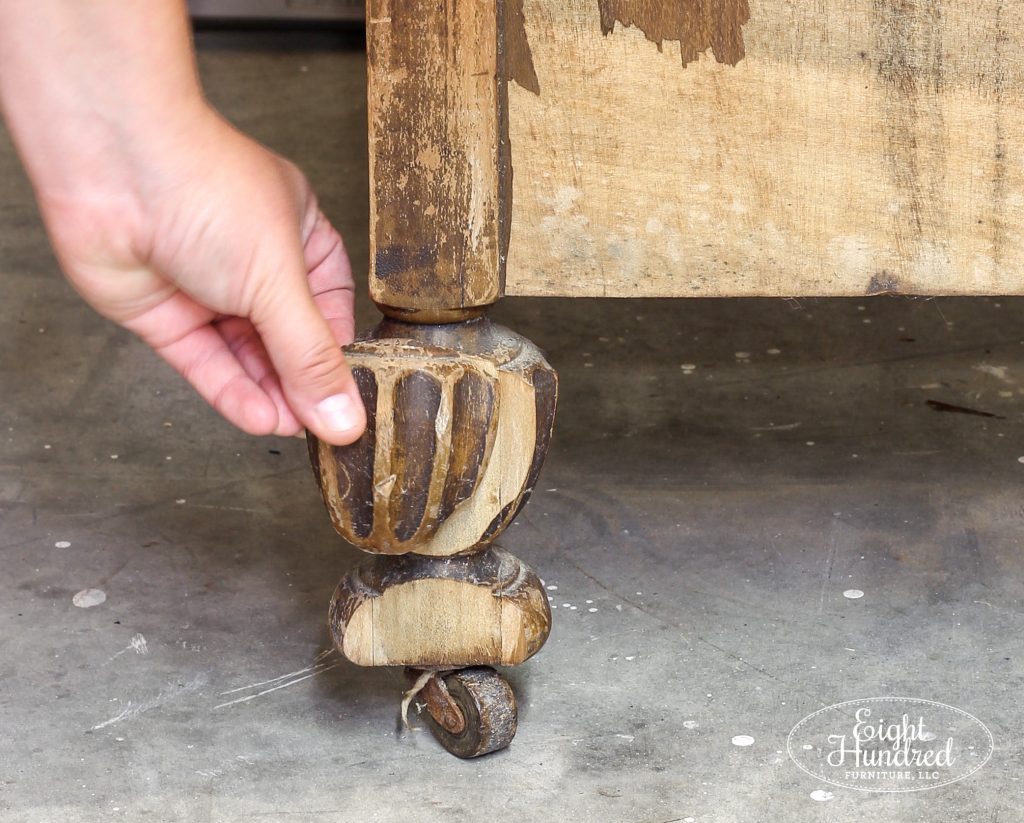 The right side of the dresser, had more large patches of veneer missing. 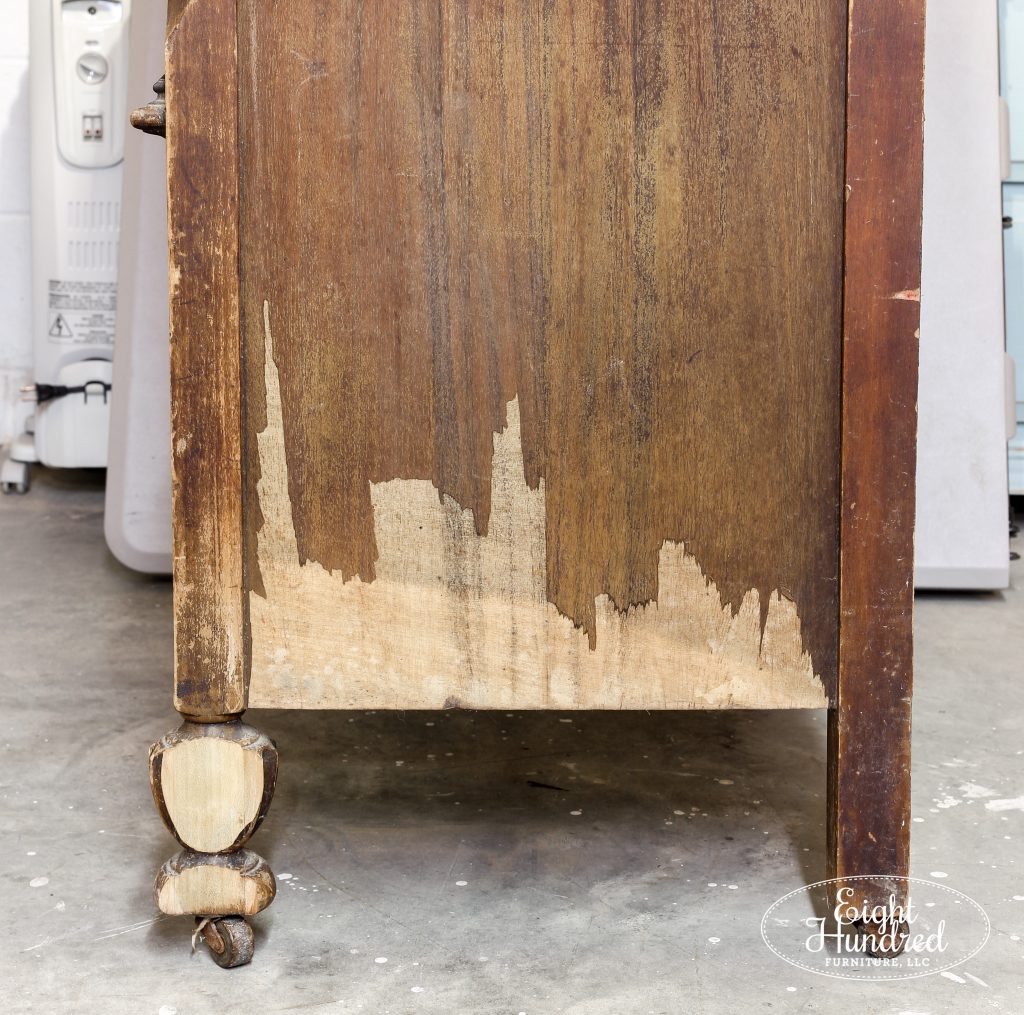 I took out all of the drawers to inspect the interior. The runners and supports were all structurally sound. The only thing the inside needed was a thorough cleaning. The bottom dust panel was cracked, but no one will see that because it will be covered by the bottom drawer. It’s not a repair that’s necessary, so I decided to leave it alone. 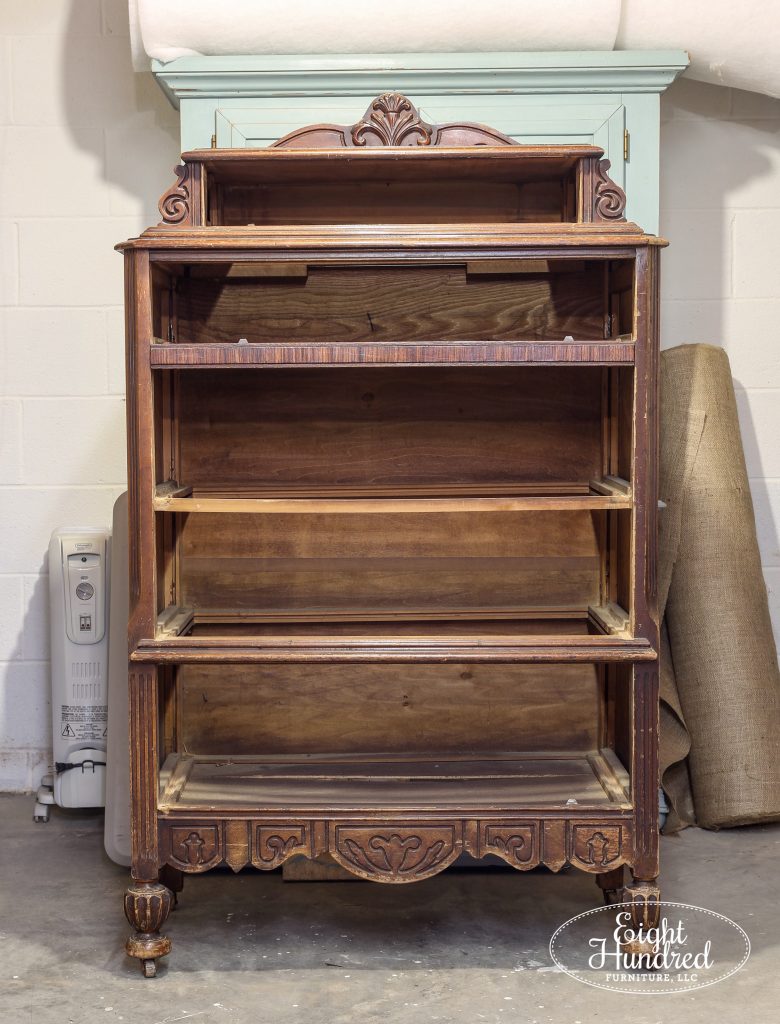 The horizontal dresser was in worse condition. The top had severe veneer damage. 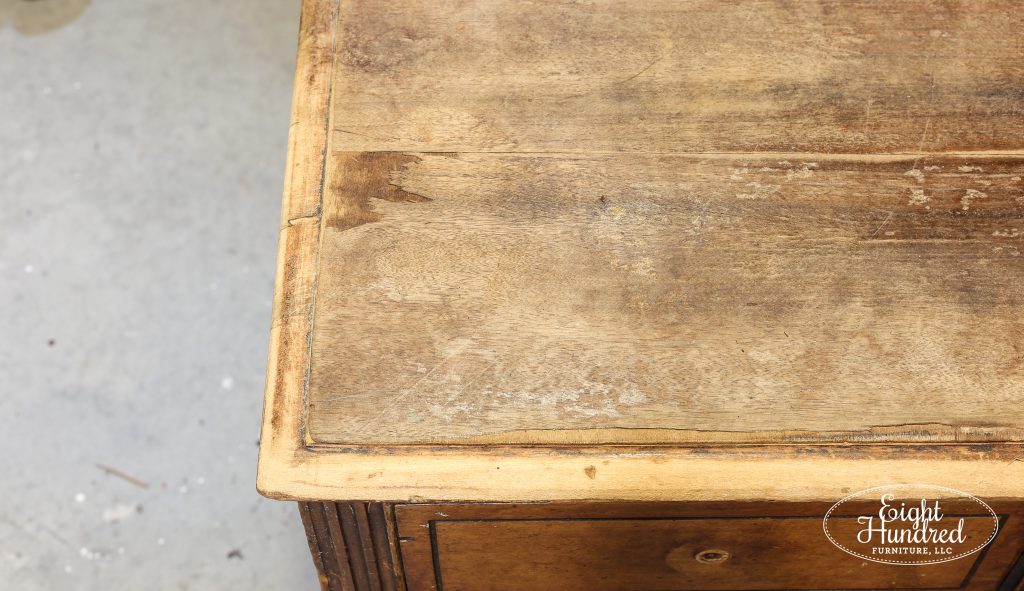 There was also evidence of water damage. It’s the brown staining in the photo below. 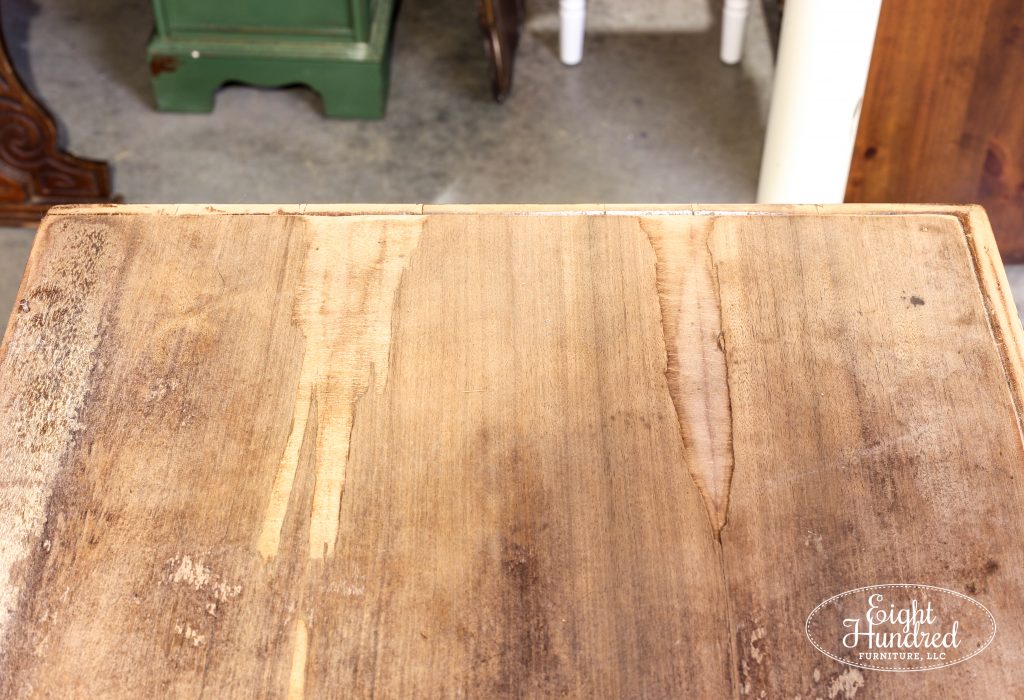 There were also chunks missing from one of the legs. Unfortunately the pieces weren’t saved. 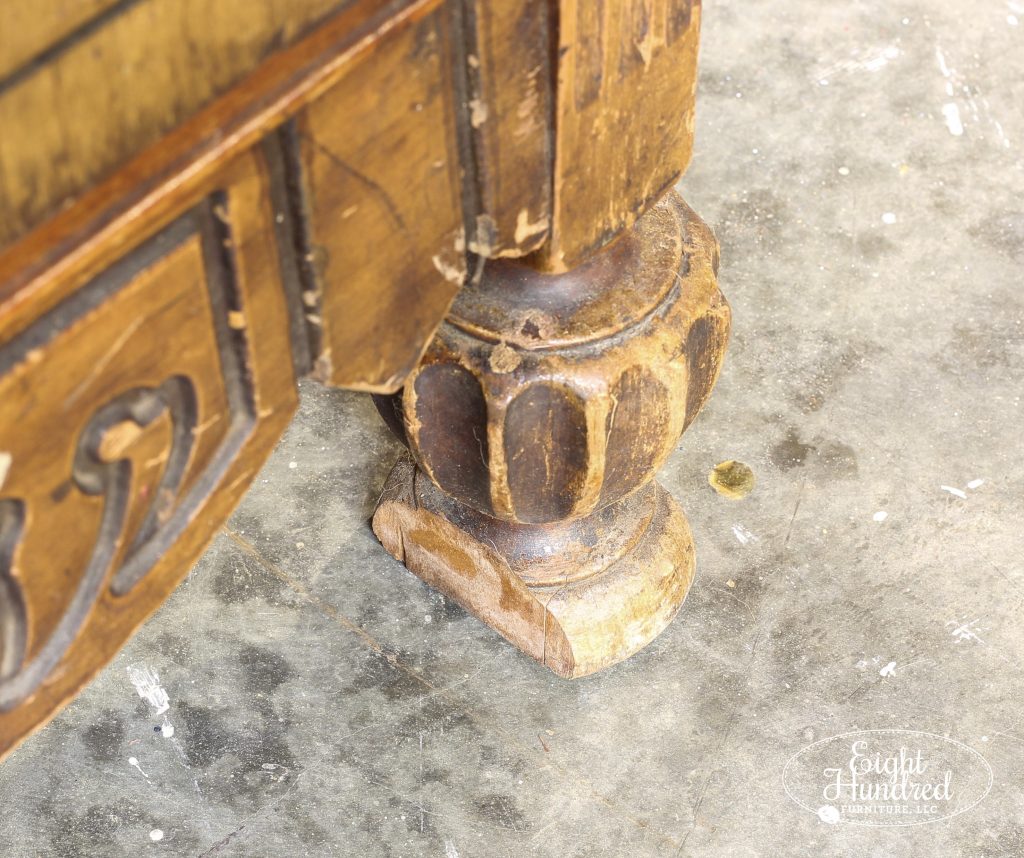 The inside of this dresser was dirty as well. Cue the big dust bunny in the corner. (Doesn’t it look like the penny was trying to run away?) 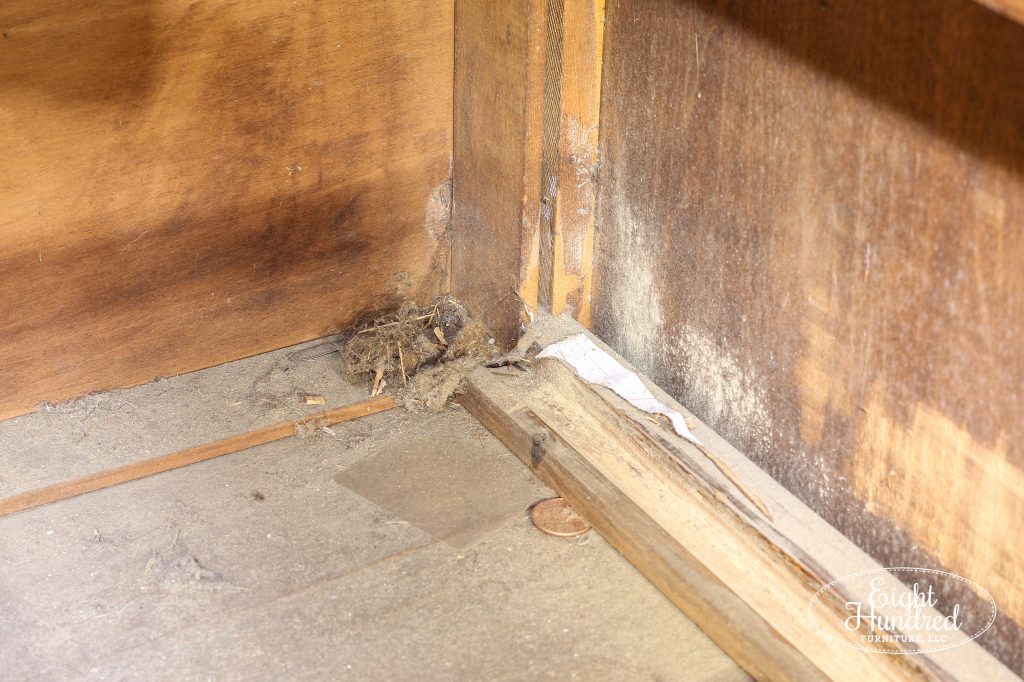 Two of the three drawers on this dresser were okay. The middle one had the most damage. It was a bit dirty and stained on the inside.

The bottom was damaged too. Can you see where a chunk of the side broke off at some point? It’s on both ends of the drawer. That’s a repair that is outside of my skill set, so this drawer will need to be fixed by a carpenter. Luckily I know a guy! 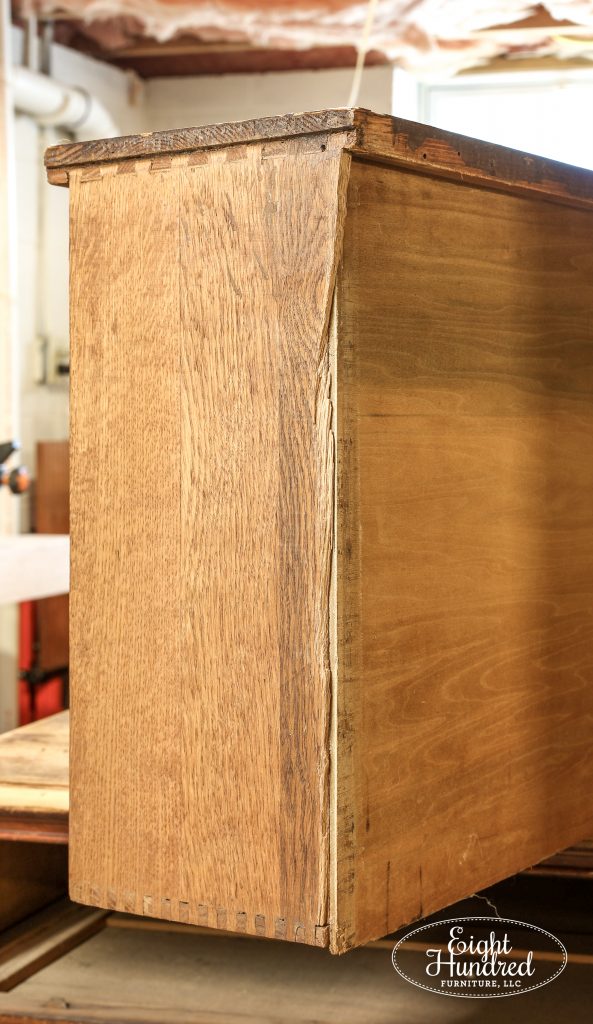 The front was almost okay, save for a small chunk missing from the top corner of a drawer and some missing trim. 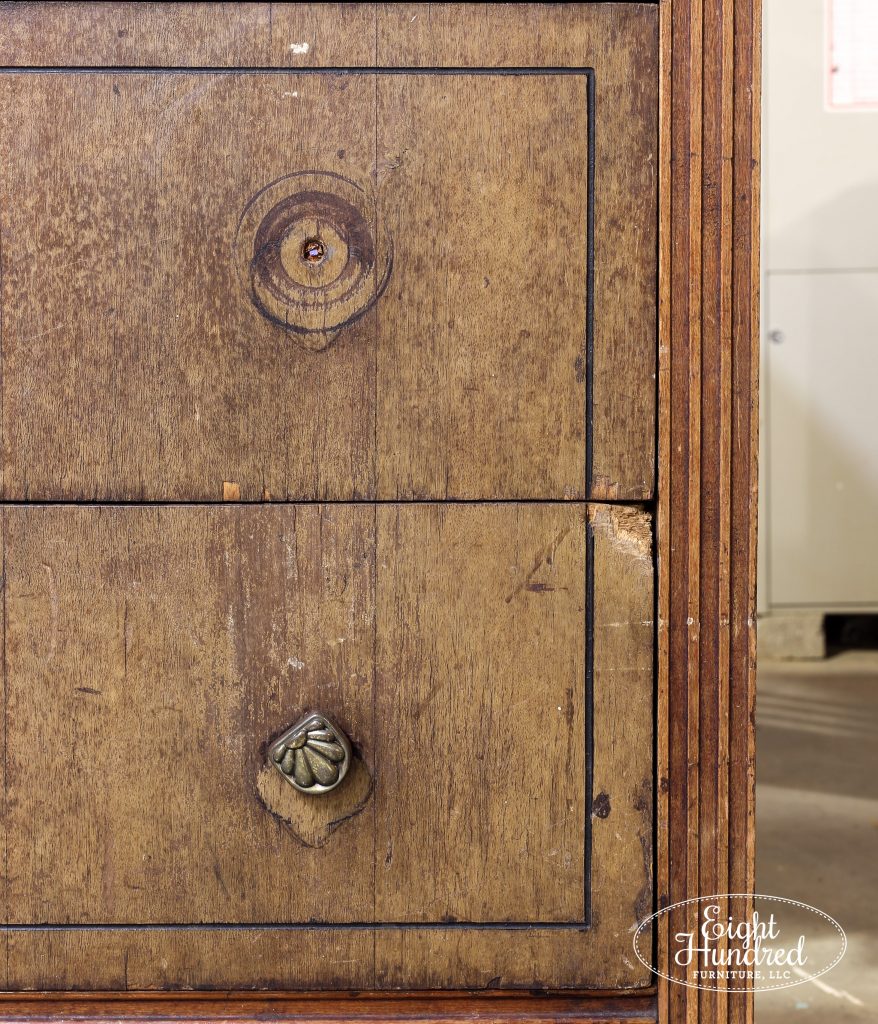 Patches of missing trim, like the one below, are common and I just paint over them. They aren’t noticeable once the piece is all the same color. 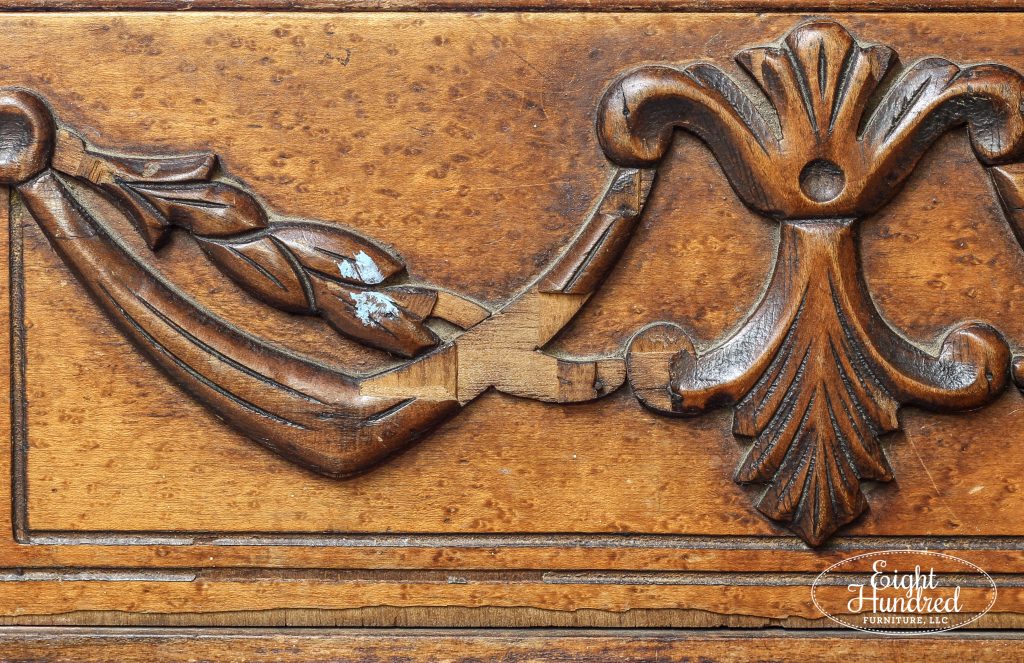 Sometimes, I remove it altogether, like I did on my Bergere depression era dresser. 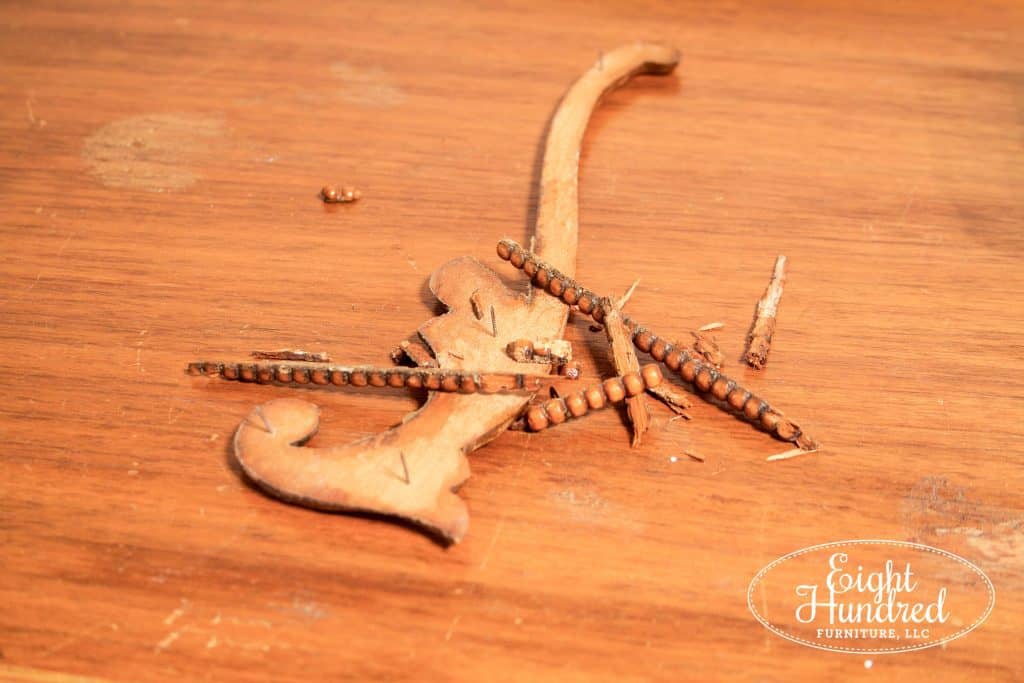 In the end, you couldn’t tell! 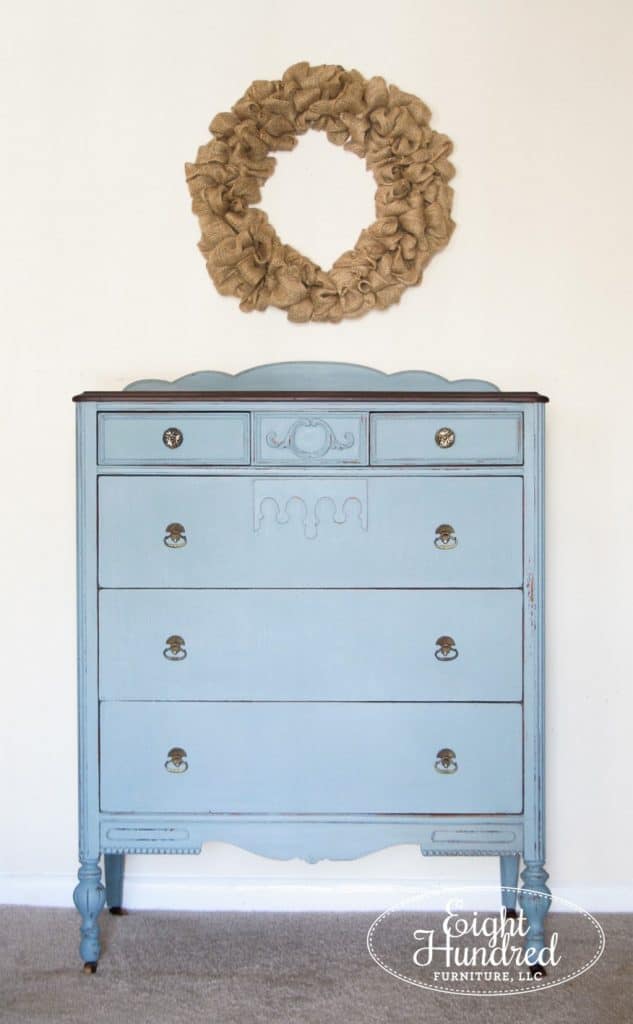 (It’s funny…I look back at photos like this one and I distinctly remember thinking how great of a picture it was! My photography skills have come a long way over the years.)

Once I was finished surveying the damage, I started my prep work by removing all of the hardware with a screwdriver. 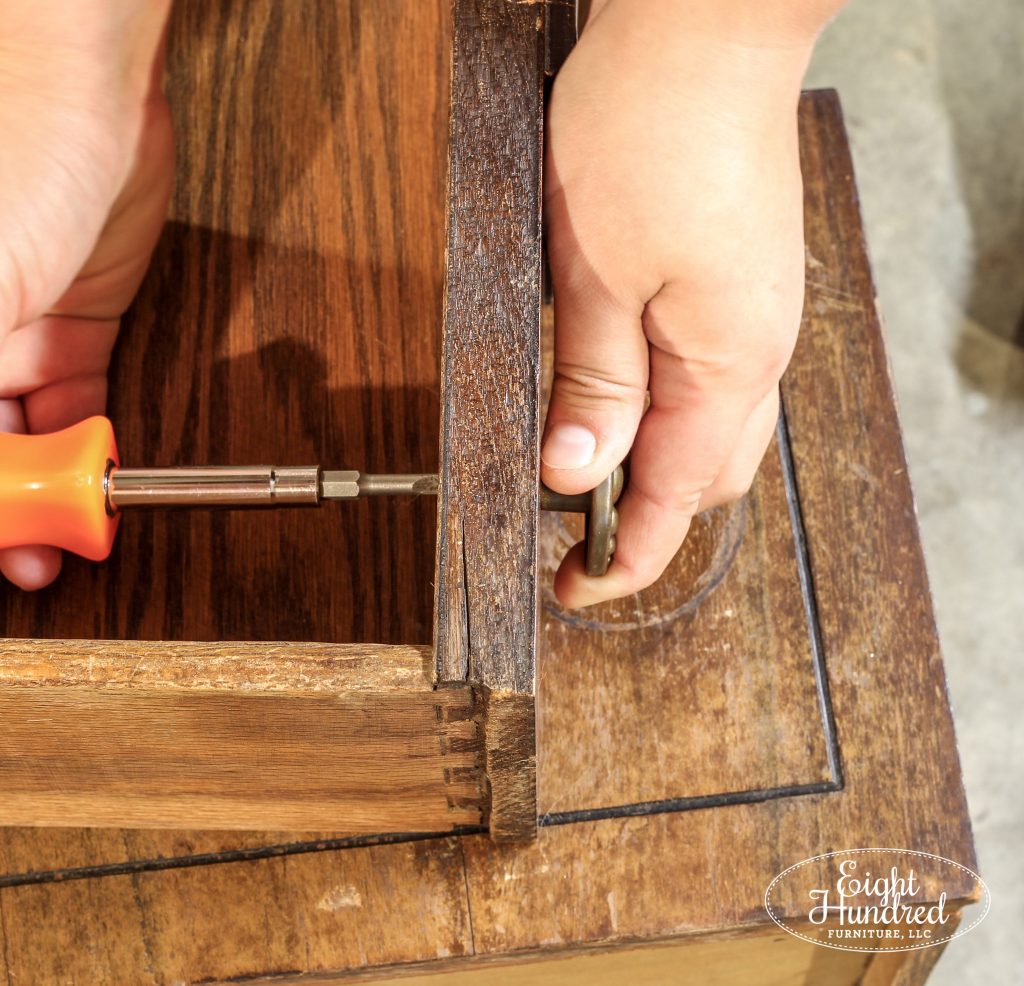 I threw away the random ones that didn’t match. They weren’t actually knobs at all. I’m not sure what they were, but they were randomly screwed into the holes with no washers or nuts on the back. I also found a colored pencil that had been jammed into one hole and was broken off. The matching set of hardware was placed into a plastic baggie and added to my hardware stash. 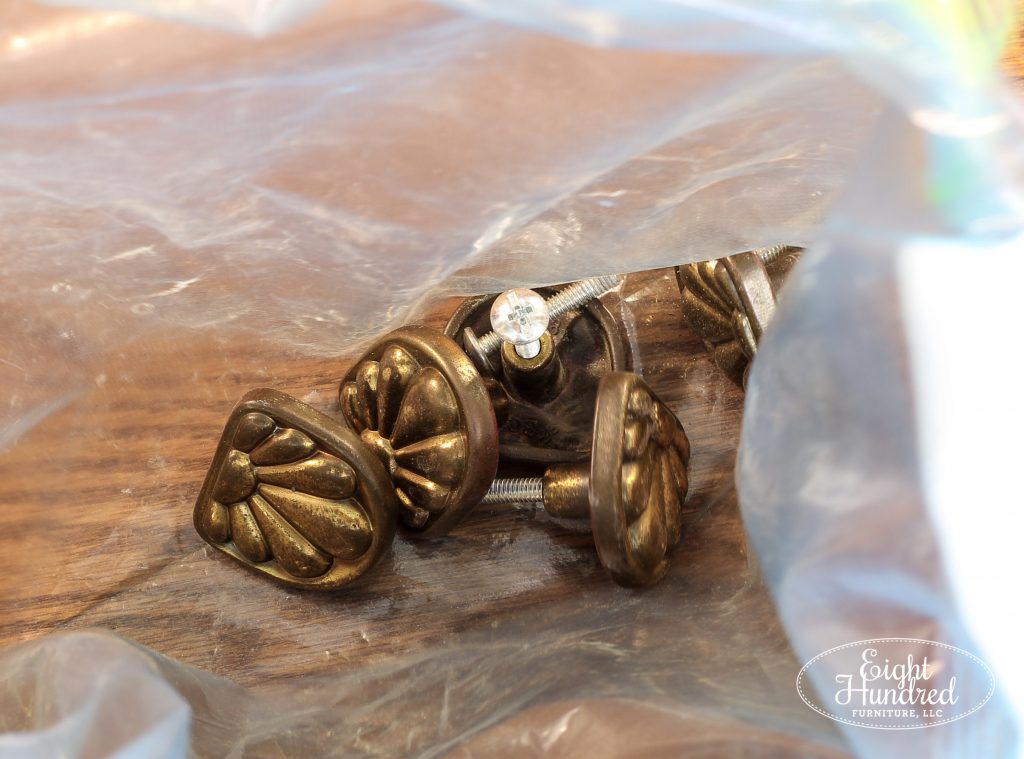 Next, I started on the insides of the dressers. I vacuumed out all of the dust bunnies and collected 13 cents in change. I followed up with some 409 cleaner and a sponge, spraying the insides down and wiping away years of dirt and dust. My sponge was black by the time I was done! I rinsed it several times and repeated the process with the drawers.

As the drawers and insides dried, I started removing all of the damaged veneer. This process is pretty easy but it’s time consuming. Essentially, I use a heat gun and a putty knife to warm up the veneer and reactivate the glue holding it on. Then I wedge the putty knife underneath and lift it off. 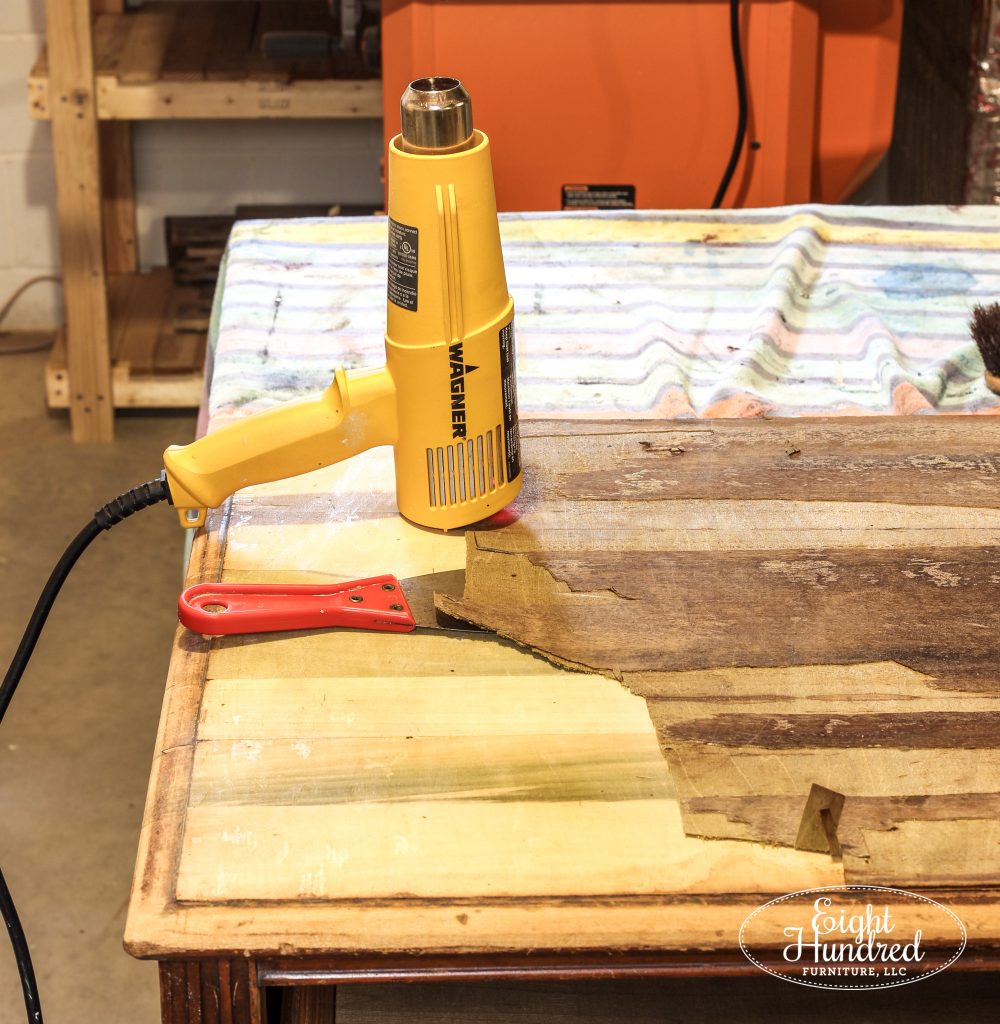 I did this on the top of the horizontal dresser and the wood underneath was beautiful! 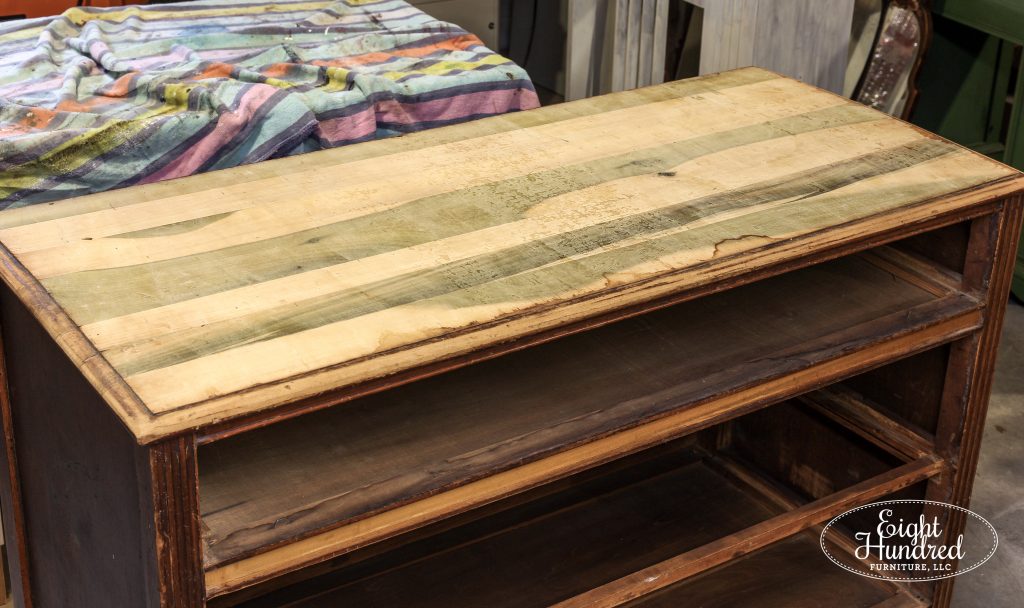 There’s some staining from water damage along the front lip, but I’m hoping that will sand out. The darker parts will blend in when I use Java Gel to stain it all. The color of that stain is a really deep espresso brown, so you won’t see the variations in the wood once it’s finished. 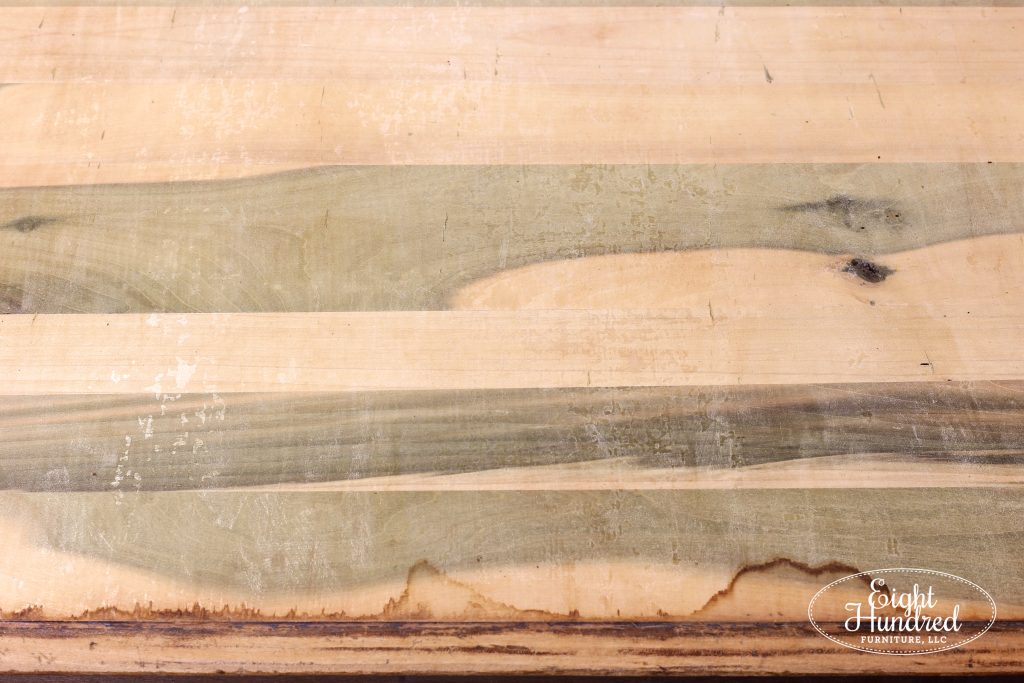 I also removed the damaged veneer from the drawer on the taller dresser as well as two nightstands that have been waiting to be repaired. They’re from the same era, so I’m lumping everything together in my prep process.

It created quite a mess, but it was worth it. 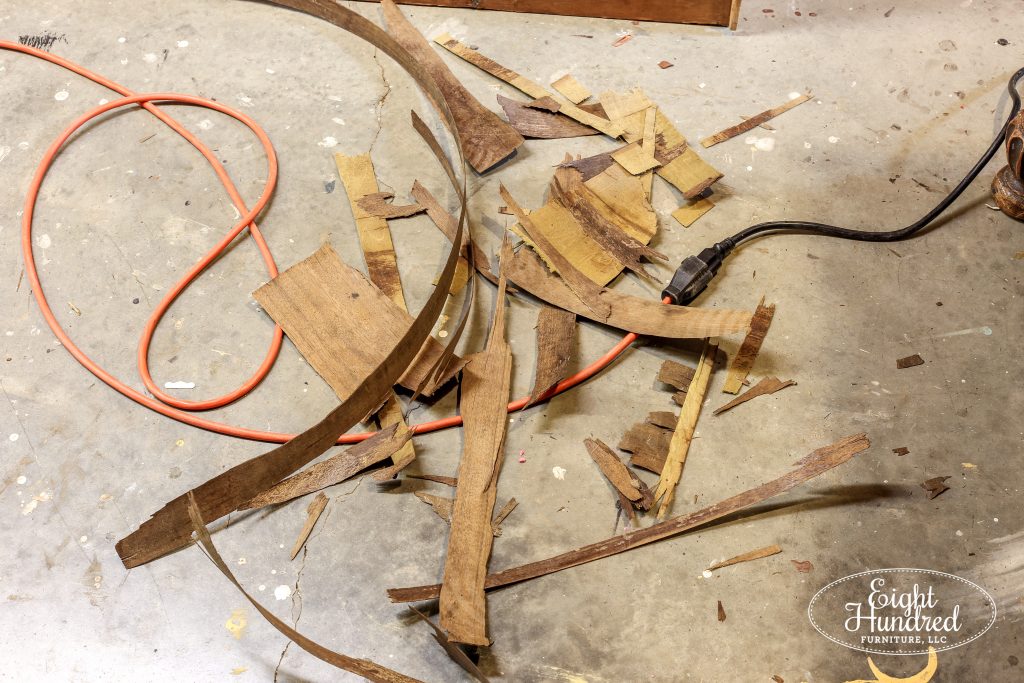 That’s about as far as I could get the other day. It took me about 4 hours or so with breaks and stretches. I try to work smart during these labor-intensive sessions to make sure that I don’t hurt my back or get a kink in my neck from being hunched over.

This is also why I’ll upcharge when these pieces are finished. There is a lot of prep work that is going into their makeovers, and that will be reflected in their prices. So keep that in mind when you’re shopping for painted furniture pieces. Sometimes there’s more indicated in the price than just paint. It takes a lot of work to get some pieces looking pretty again.

Today, I plan on sanding down the rough patches I created from removing the damaged veneer. It’s pretty humid today in Pennsylvania, so I’m in for a sticky day and will probably be covered in sawdust by the time it’s over! For now, these two dressers are well on their way to becoming beautiful.