Every time I work at Morgantown Market, I always take a walk around the store to see what my fellow vendors have brought in.  There are some pieces that I know I want right away and it takes me no time at all to scoop them up and take them home.  This one drawer table was one of them. 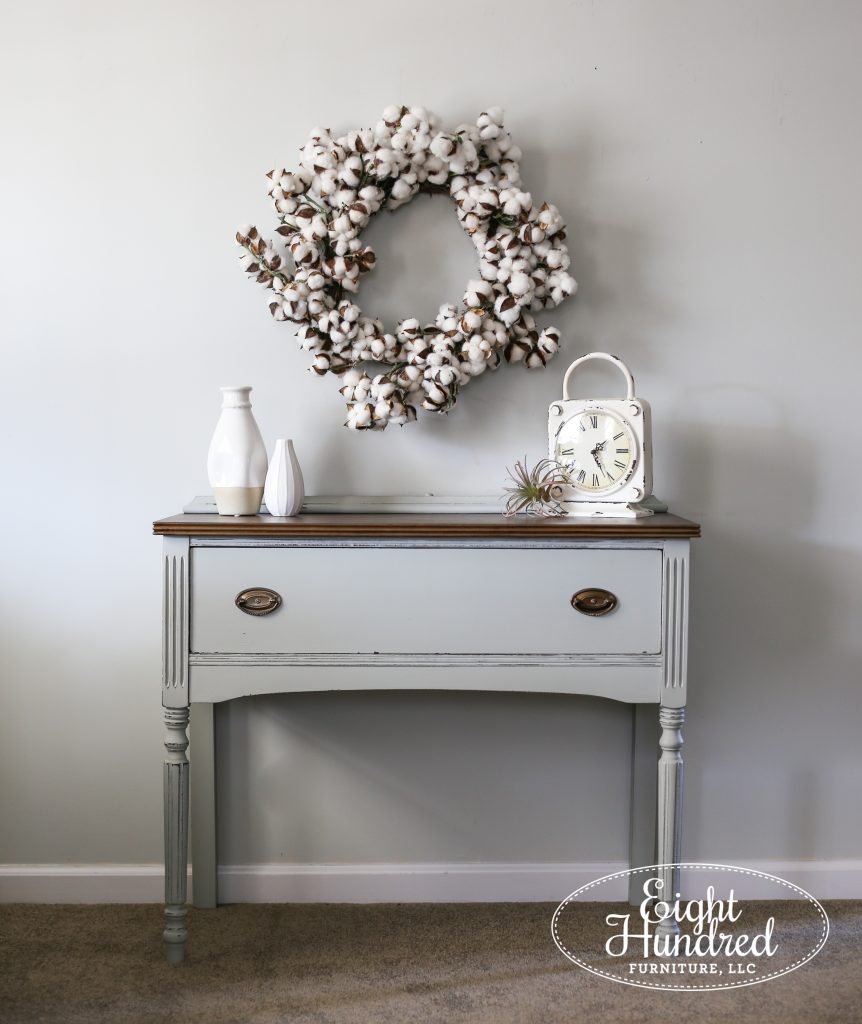 And then there was this sweet piece. 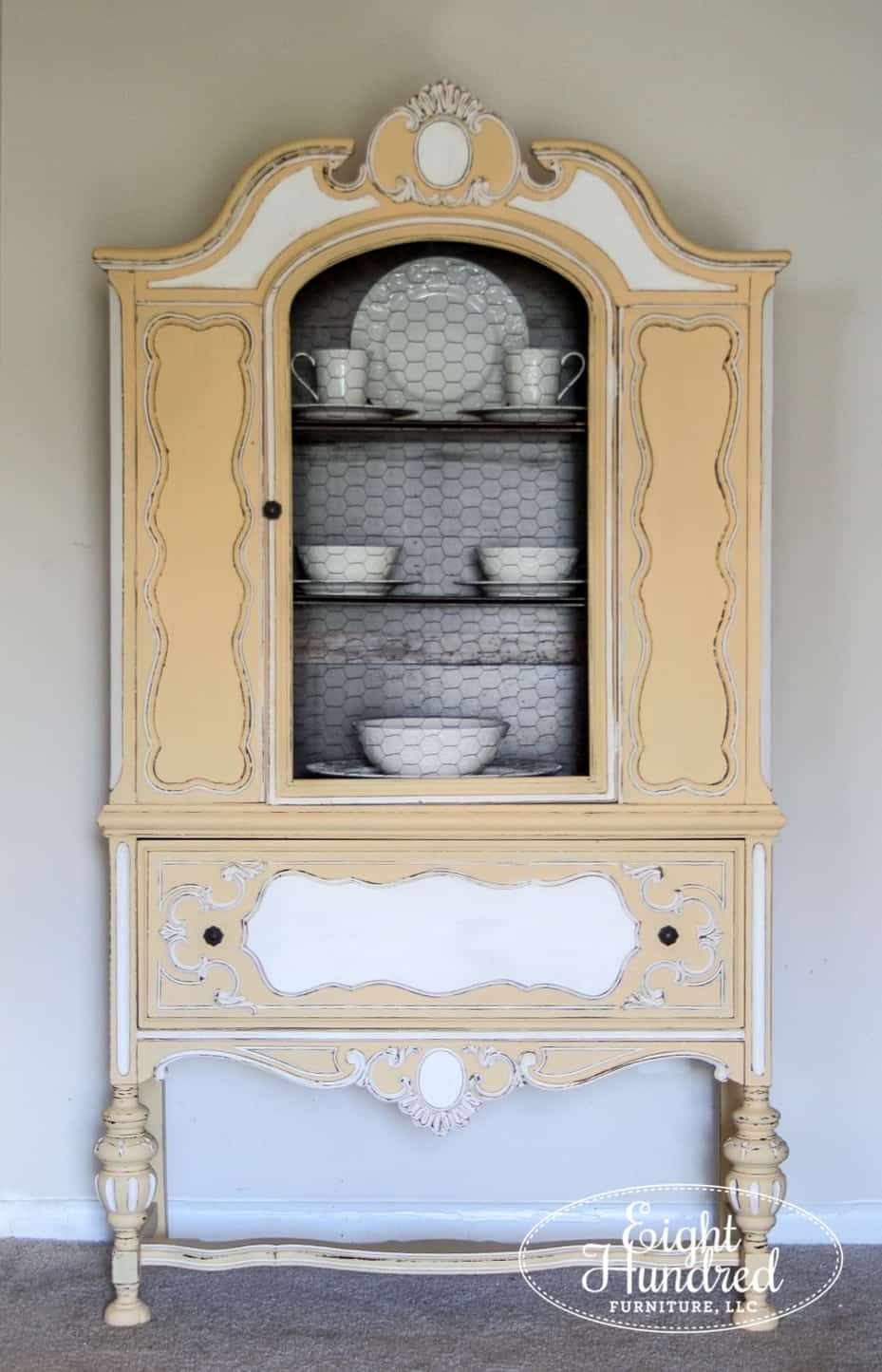 Oh, and this one too! 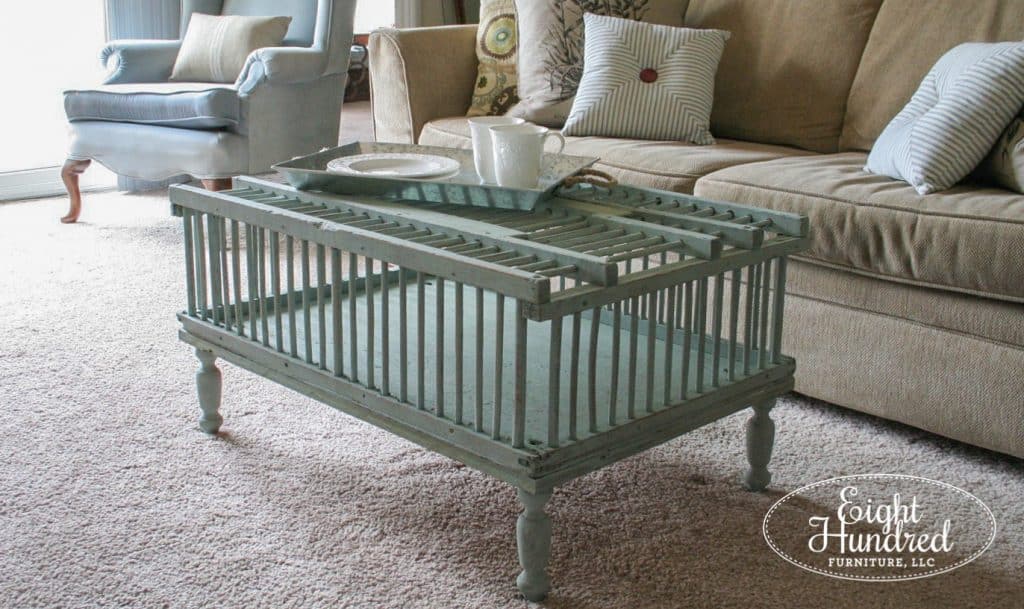 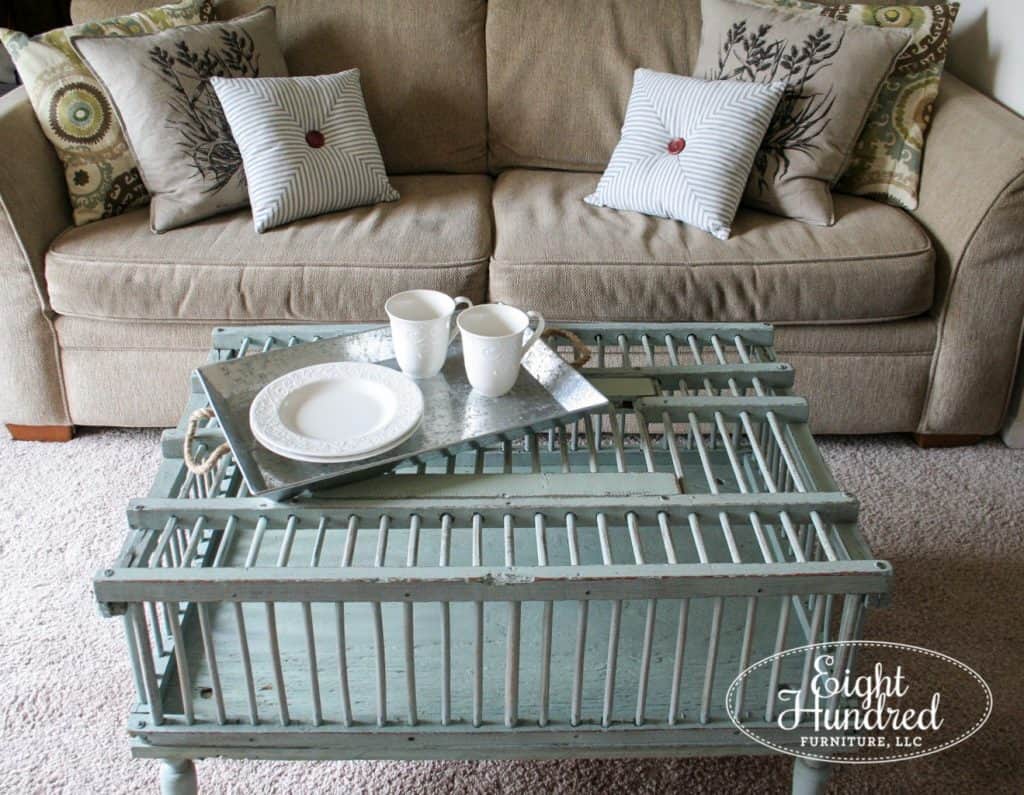 These pieces were no brainers.  I saw them, loved them, checked the price, and bought them immediately.  There are others, however, that I really have to think about before I buy them.  These are the really yummy pieces that would look beautiful made over, but the price tags force me to slow down and think about my profit margins.

This plantation desk was one. 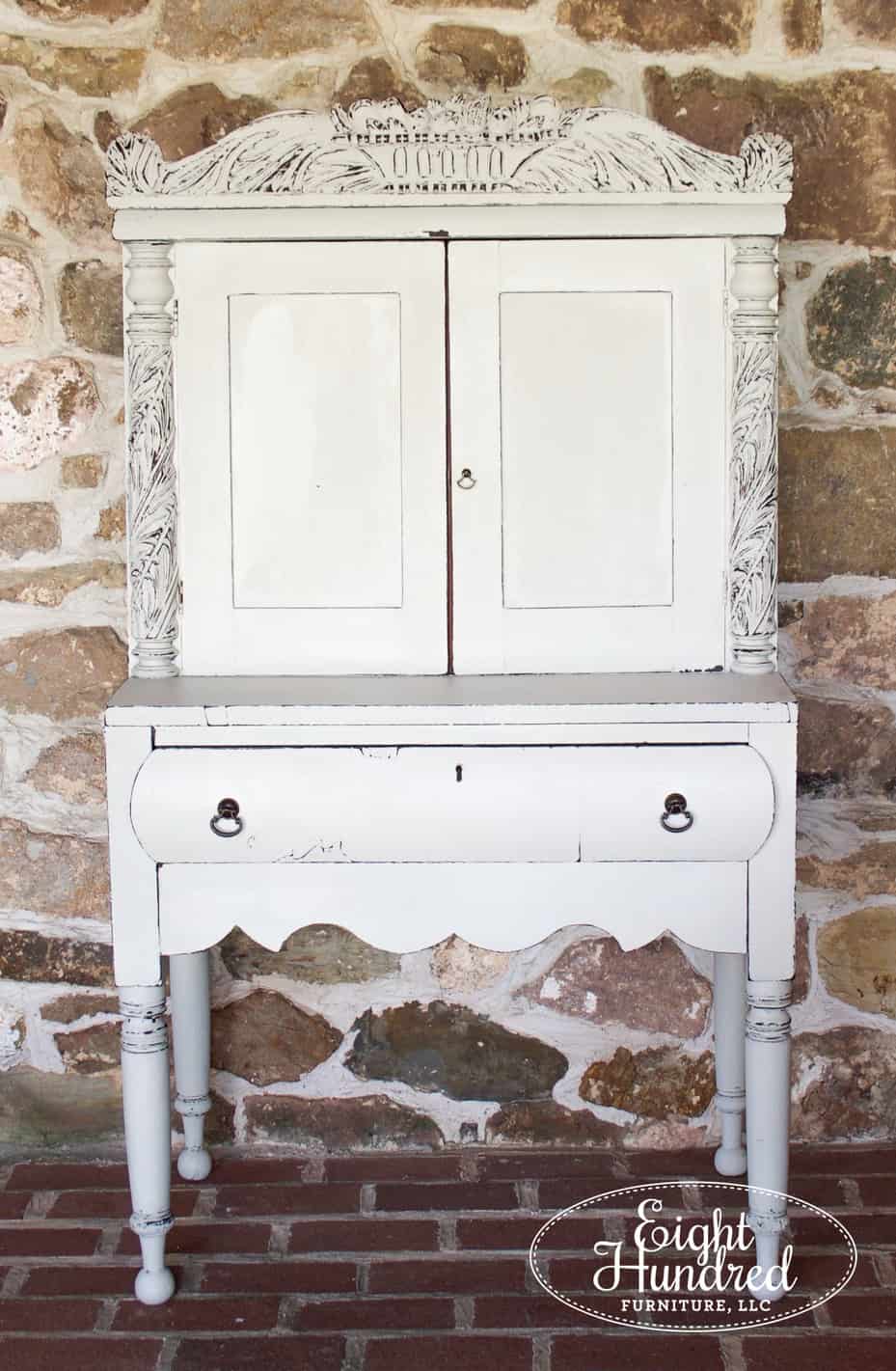 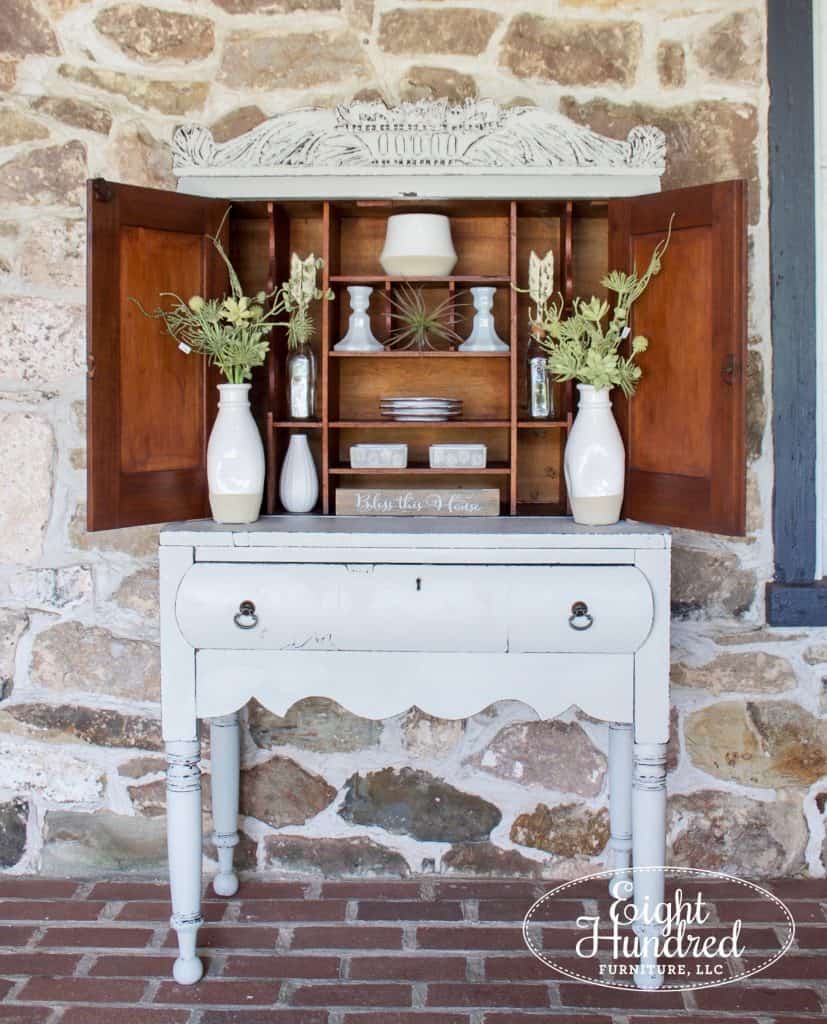 And this hutch was another. 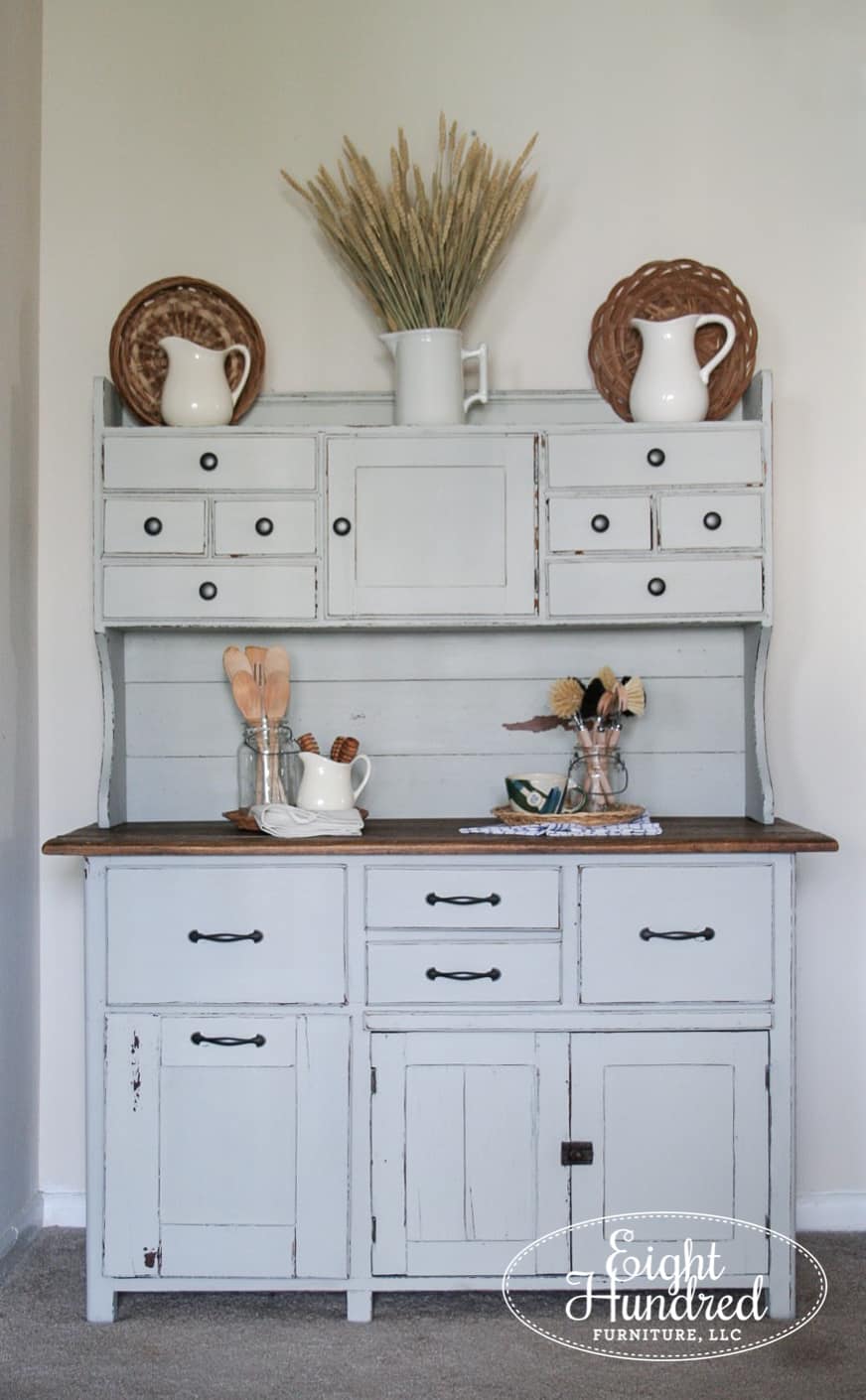 That’s always a tough line to toe as a furniture flipper.  I can buy the most amazing piece and do something really special with a few coats of paint.  The trick is doing it in a reasonable amount of time using a reasonable amount of product so that I can sell it at a reasonable price to the public.  My selling area has a bit of a cap that I can’t seem to break.  Once my price tags reach a certain number, it seems that those pieces sit and sit, despite the fact that everyone thinks they’re beautiful.  I’m still trying to figure out the magic combination of price, color, size, and style of furniture so pieces move at a decent rate and I’m not sitting on inventory for months on end.

After all, Eight Hundred Furniture is a business…not a hobby.

That’s why I had to think long and hard about buying this crazy beautiful counter from a vendor just down the stairs from my booth. 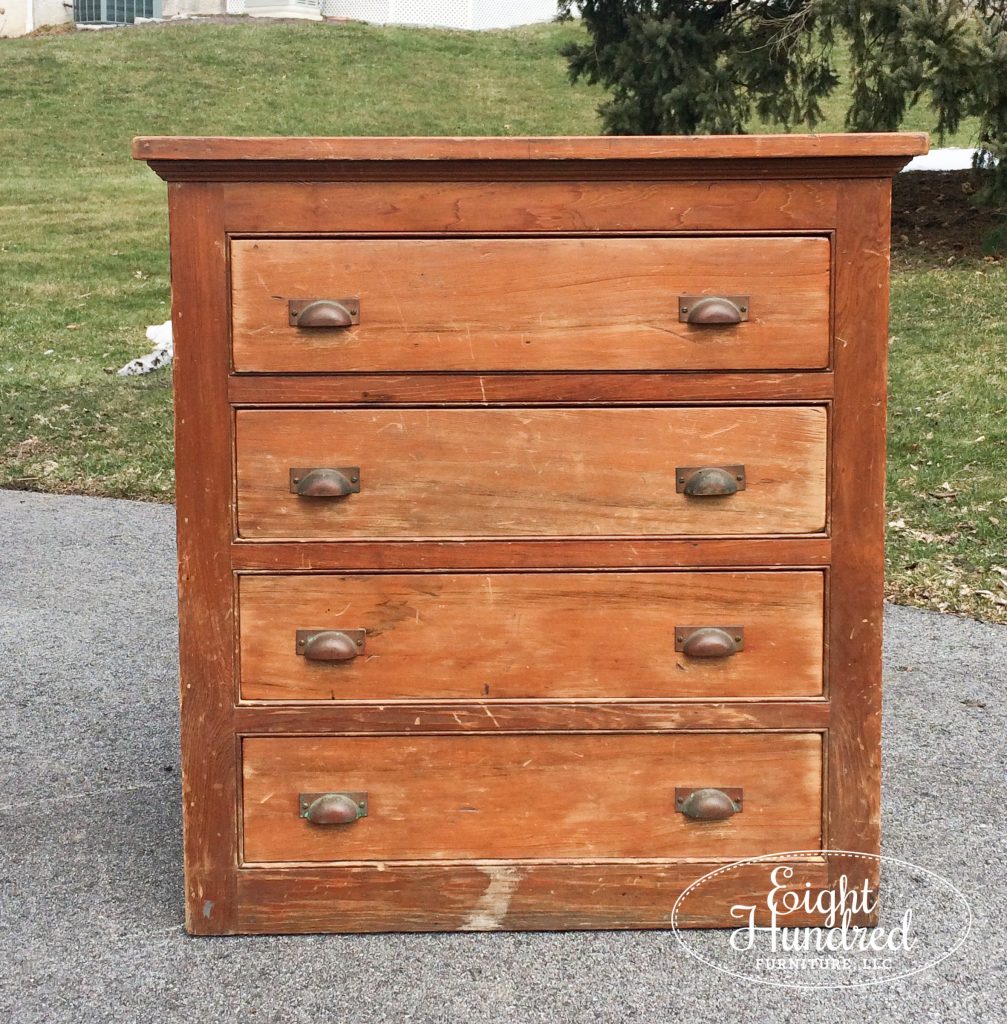 I think we can all agree that it’s a stunner.  I have been looking at this piece formonths.  And by that, I mean eight months to almost a year.  It’s been a looooong time.

But seriously, can you blame me? 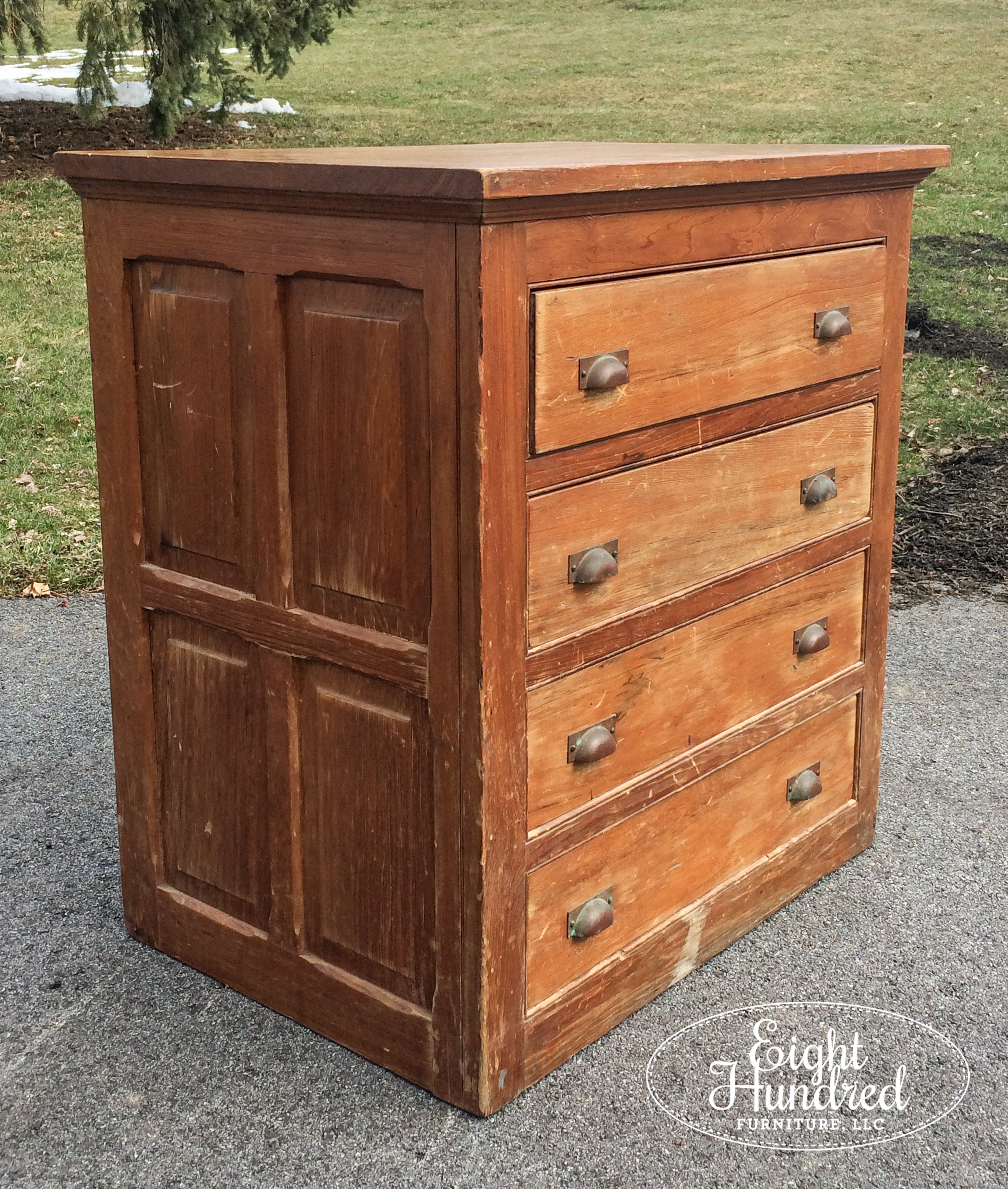 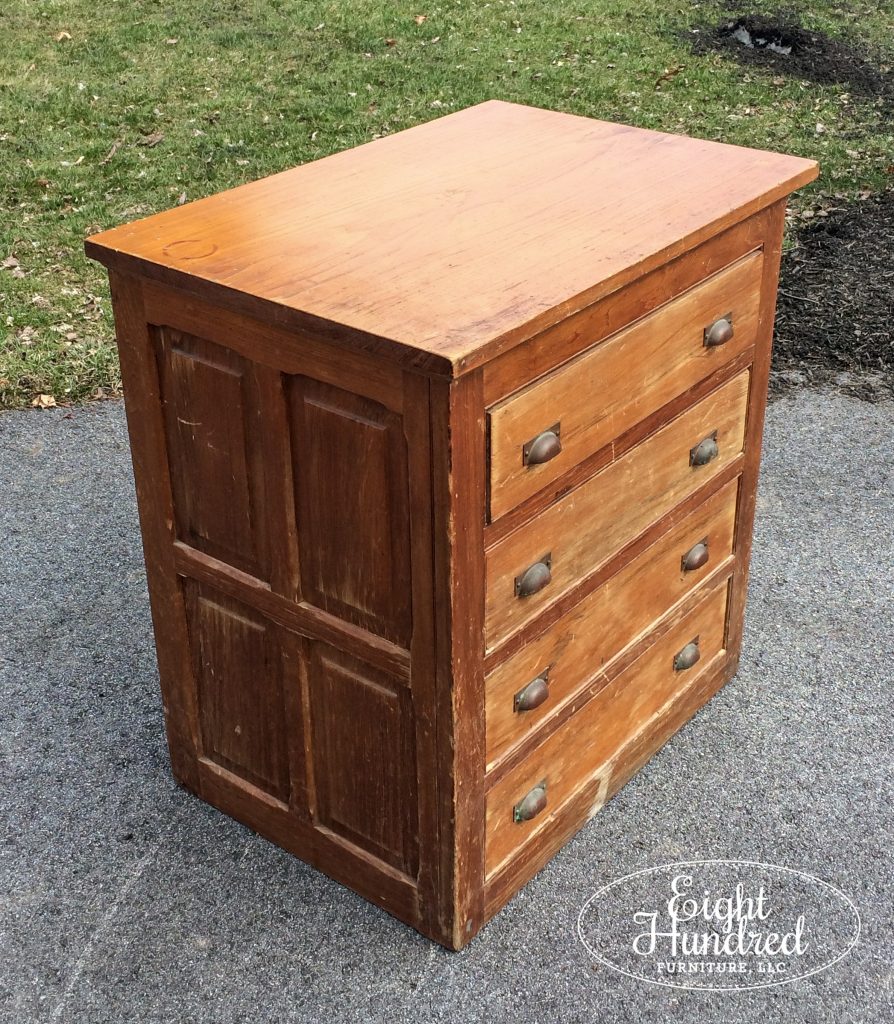 The drawers open and close better than other pieces I’ve bought.  They’re a little sticky, but a quick rub with a wax puck will take care of that.  They look like they were originally used for some sort of jar storage. 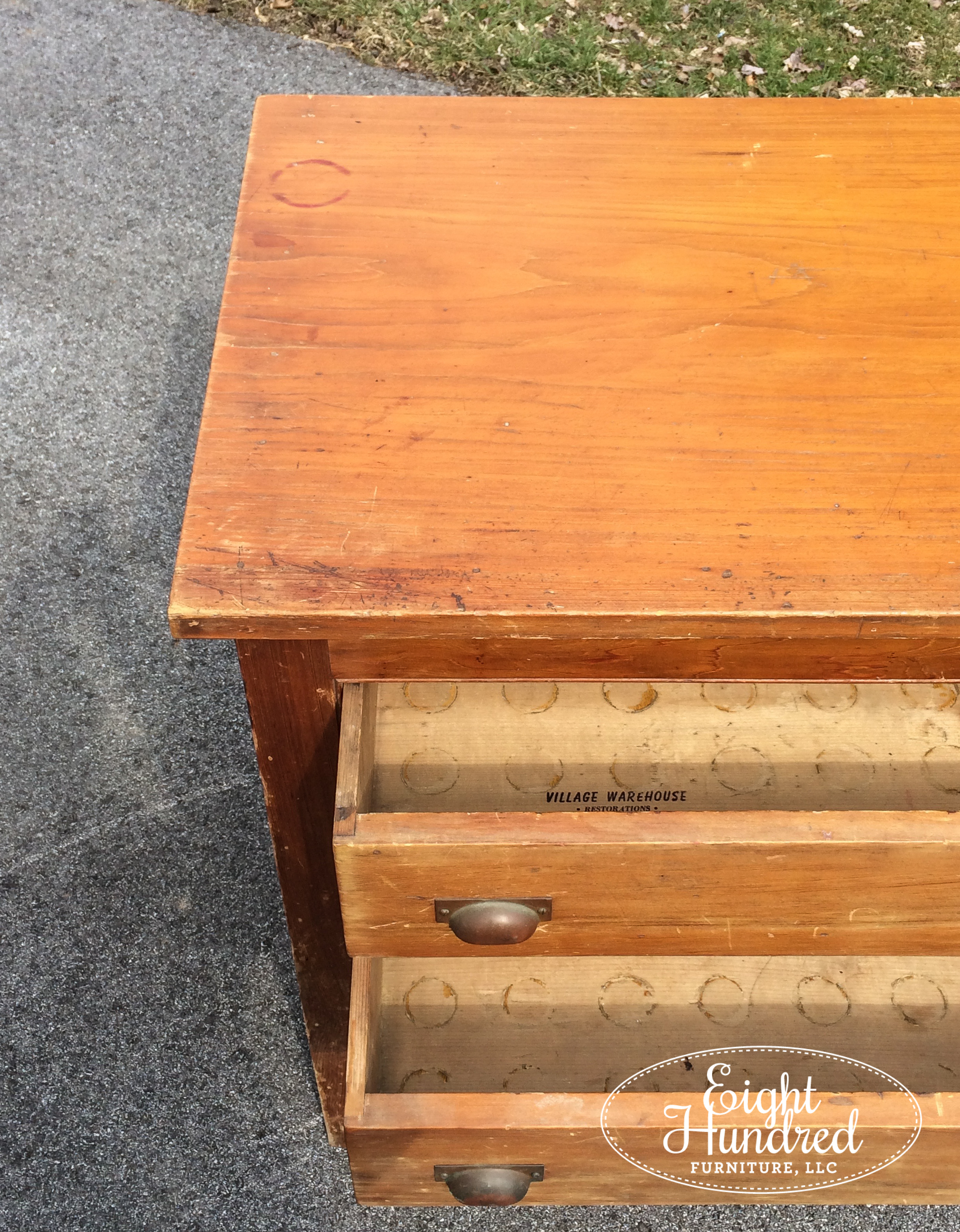 The back is made of the most beautiful tung-and-groove beadboard.  Now that isn’t the faux beadboard paneling you buy from the hardware store.  Those boards are the legit real deal!  There’s a little bit of damage at the bottom from termites, but they’re long gone.  Plus, it’s on the back, so it’s not noticeable. 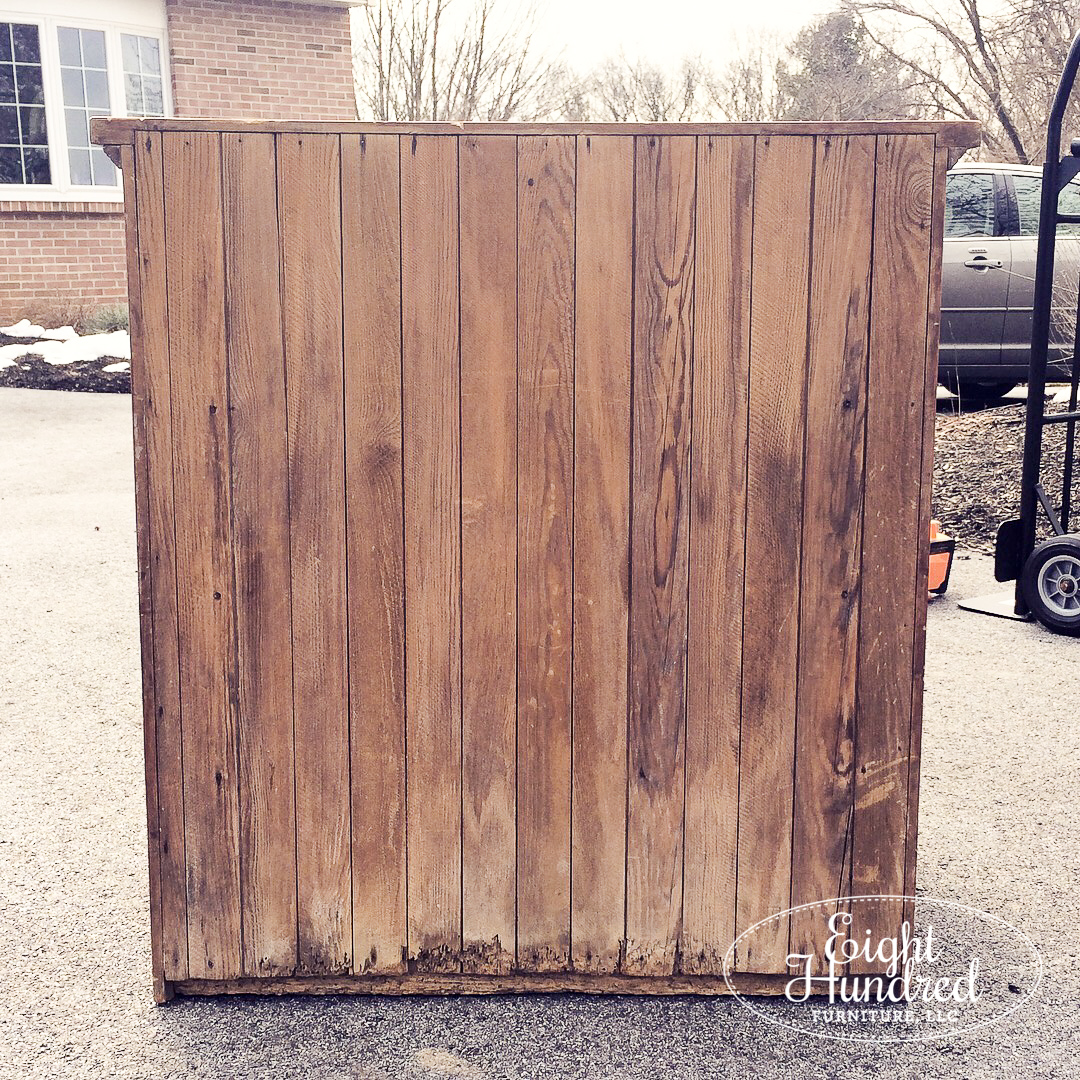 After a lot of time and consideration, I finally pulled the trigger on the counter because I literally couldn’t stop thinking about it.  I also had the time and the need for a piece like this in my workflow and the money to buy it.  The counter was much more than I typically spend on a project piece, but I think I can flip it and get what I need from it at the Spring Barn Market on April 28th at Pheasant Run Antiques.

Once I purchased the counter and brought it home, I removed the gorgeous original cup pulls. 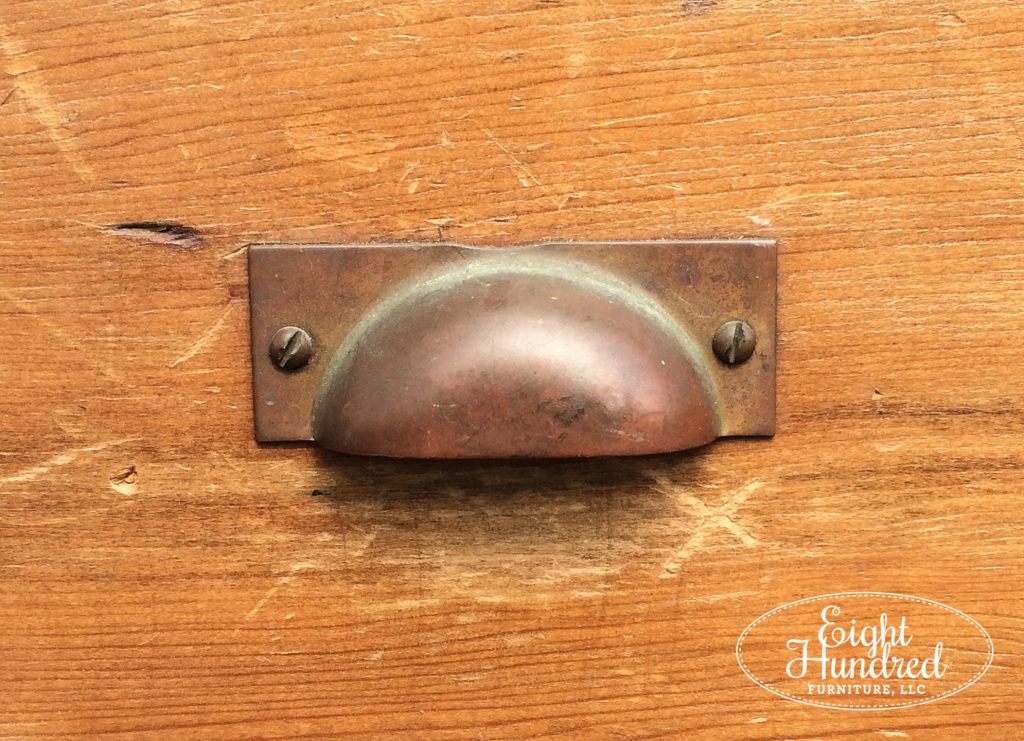 Most of them came off with no issues.  One had a stripped screw that I couldn’t get a grip on, so I decided to let it be and paint around it.  It does look a bit sad just hanging there though, doesn’t it? 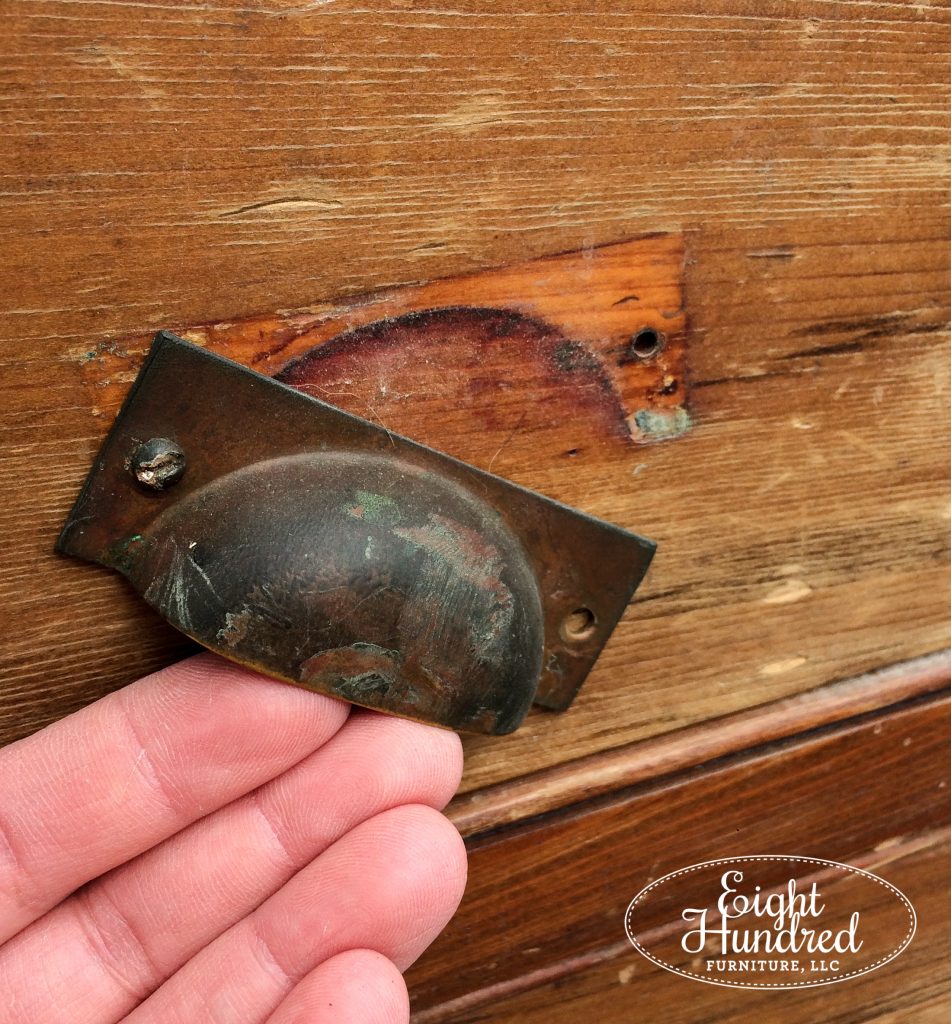 My vision for the counter was to use Miss Mustard Seed’s “Grain Sack” and let it chip as it wants.  I also thought it would look pretty and industrial propped up on a nice pair of casters.  (More on those later.) 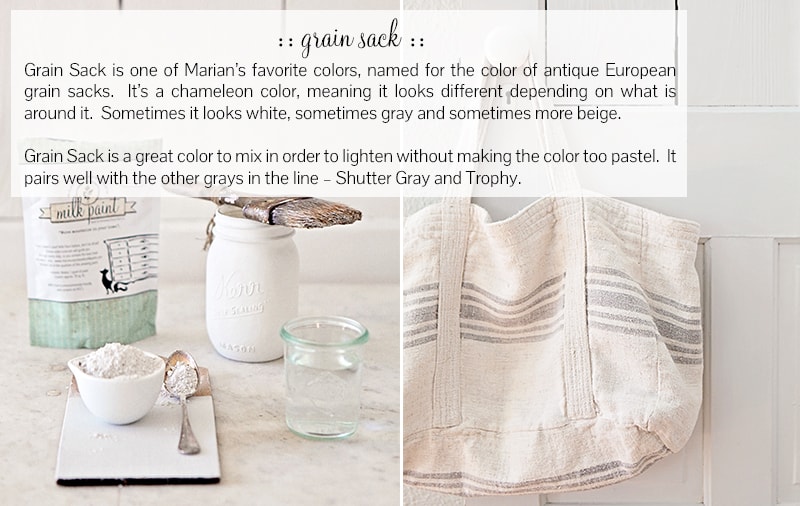 I started prepping the piece by scuffing it with 100 grit sandpaper.  I thought the surface would be easy to scuff, but as I actually started doing it, it became clear that scuffing was going to be much harder than I thought.  I bumped the grit down to 80 but it was still difficult to rough up the surface.  The original finish was tougher than I had anticipated.

The other problem that arose was the color of the piece.  As I was making my way across the piece with sandpaper, I noticed that it had streaks of pink, red and orange all throughout the finish.  You can really see it in the photo of the hanging cup pull.

And I did NOT do any color editing on these photos.  It really was THAT orange!

My gut told me that this piece would need to be primed before I painted it.  This would do two things for me.  First, it would seal in any potential bleed through from those orange, red and pink spots.  Second, it would provide a surface that MMS Milk Paint can adhere to, thus eliminating my need to scuff.

This is why it’s so important to prep a piece before you start working on it.  Even if it’s just giving your piece a wipe down with a damp paper towel.  Prepping gives you the opportunity to inspect a piece from all angles, and sometimes you’ll notice things that you didn’t see at first.  I wouldn’t have known that this piece was going to be tough to scuff until I started prepping.  I also didn’t see the true color of the finish until I got close enough with a piece of sandpaper.  Behold the power of prep work!

Once I decided to prime the counter instead of scuffing it, Marc helped me get it down into my basement workshop, and I applied two coats of General Finishes Stain Blocker. 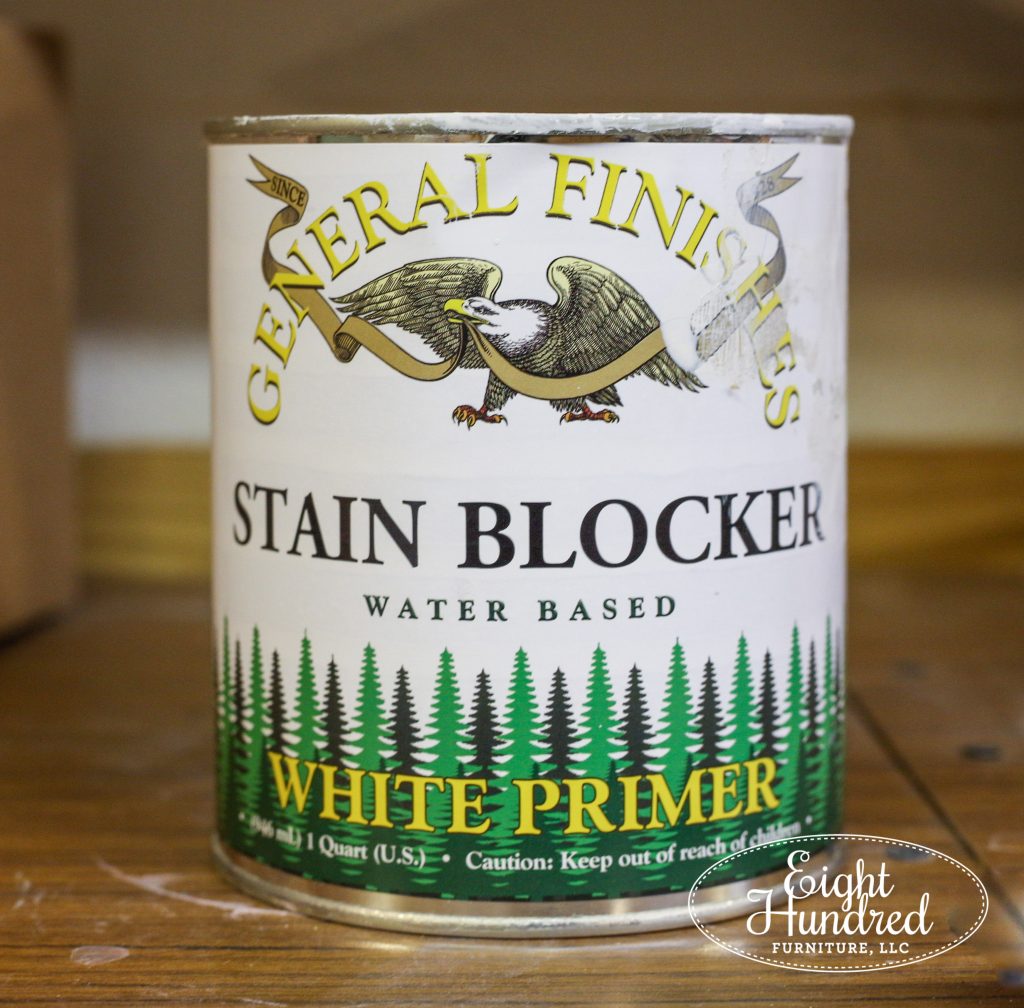 Stain Blocker is General Finishes’s water-based white primer.  Now that I am a GF Retailer, I want to expose myself to as many of their products as possible, so I purchased a case of Stain Blocker a few weeks ago.  I’ve been waiting for a project that required primer, and now I finally had one!

Stain Blocker can be used to protect your paint from stain, dye and wood tannin bleed-through.  You can use it over an existing finish (like paint or stain), raw wood or on MDF as a base coat for other types of paint.

Stain Blocker is more expensive than other types of primers that are available at your local hardware store, like Zinsser or Kilz.  It’s designed for effectiveness, not price point.  General Finishes advocates that a successful primer requires a sophisticated resin system and an atypical formulation, which equates to a higher price point.  It’s an expensive product, but so far, it’s definitely worth it!  And the way I see it, proper preparation and priming will result in a finish that won’t bleed once I’m done painting.  Cutting corners with primer will result in more trouble down the road, so I’d rather spend the time and money up front and set myself up for a finish that will be free of stains and bleed-through.

I applied two coats of Stain Blocker to the counter and it locked in everything I was worried about.  The first coat dried and I saw some stains coming through.  This is actually normal for primers.  The first coat draws the stains out and locks them in.  The second coat of primer seals all of the stains in and covers them up with a white base.  That’s why you’re supposed to apply two coats! 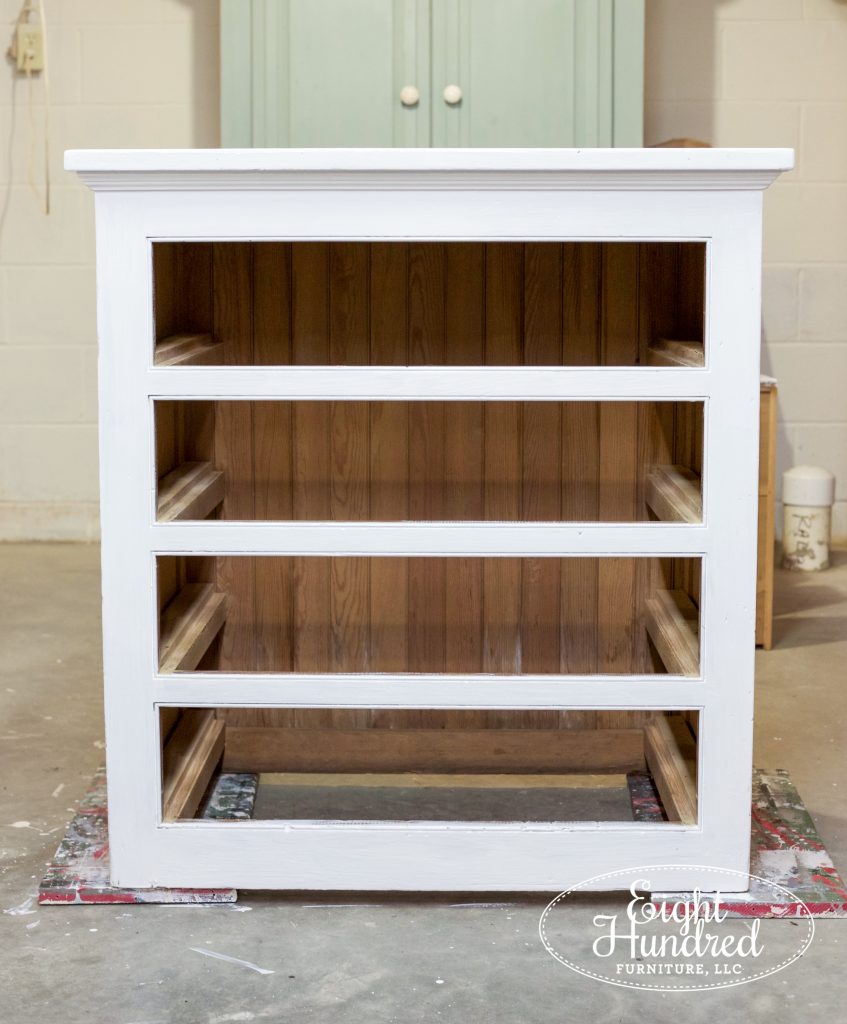 I painted the body separate from the drawers. 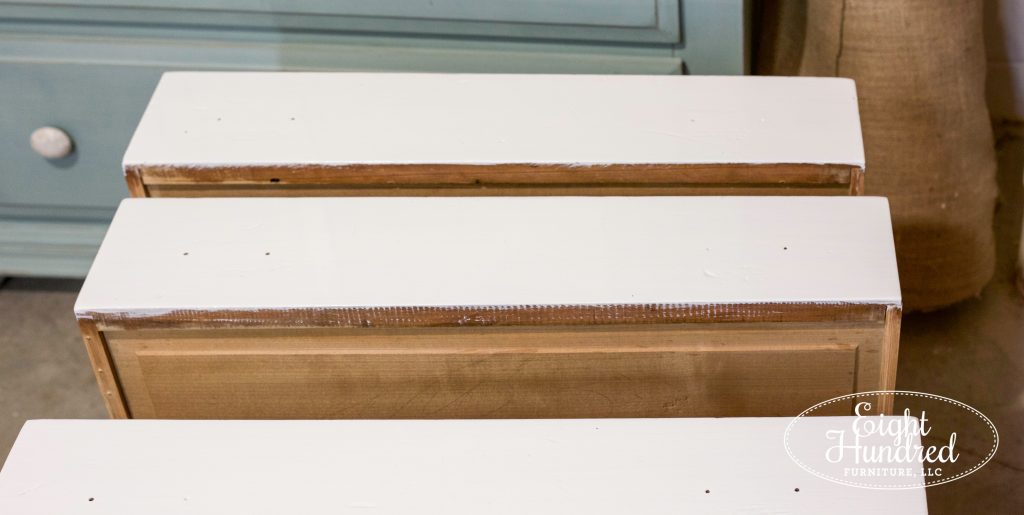 Remember that drawer with the hanging cup pull?  I painted around it carefully and will sand off the primer that accidentally made its way onto the top.

So far, so good!  The next step is to start mixing up my Grain Sack MMS Milk Paintand hopefully, I’ll only need two coats to get the coverage I’m looking for. 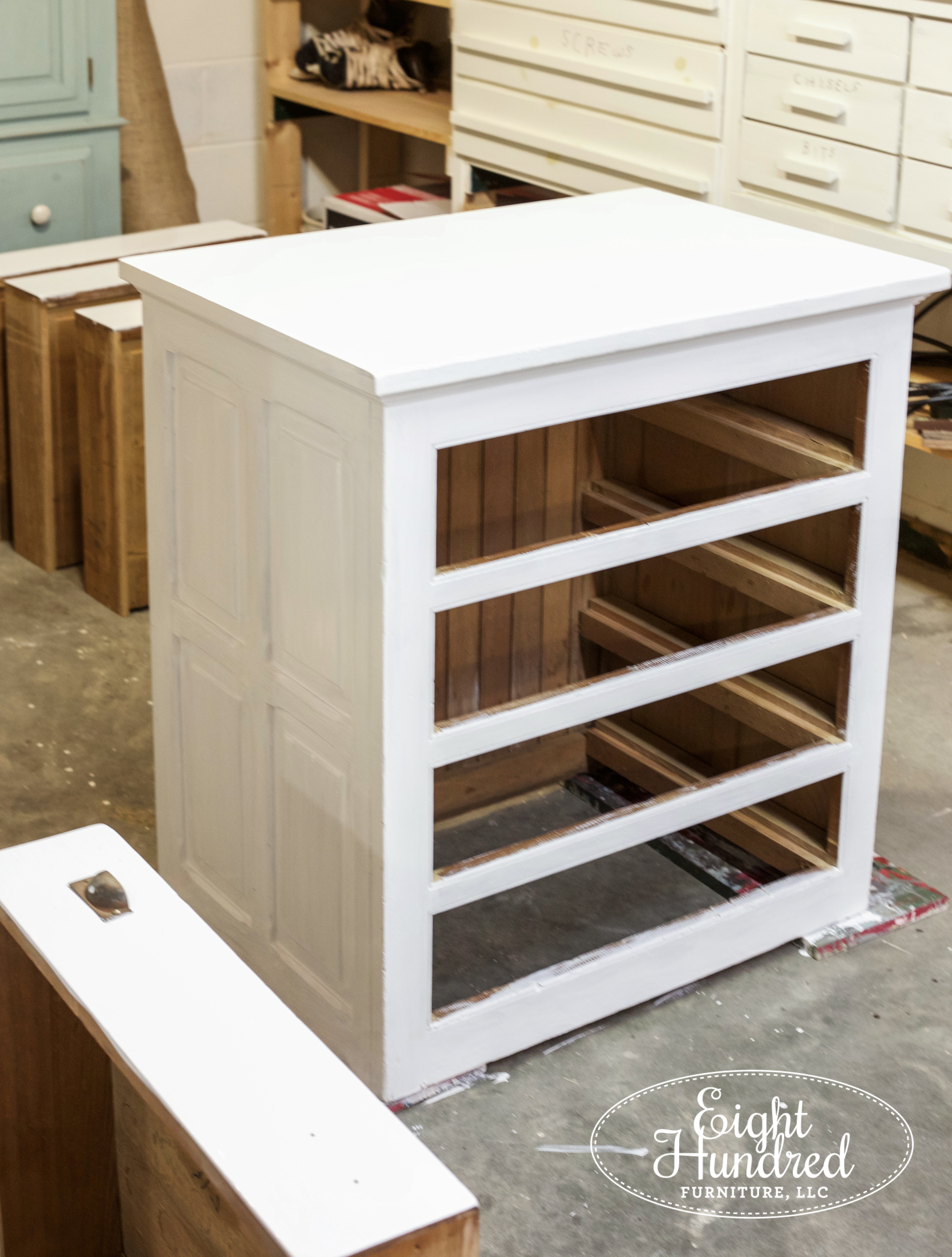 I also ordered some brackets and furniture feet from The Home Depot.  I thought these carved feet would compliment the panels on the sides. 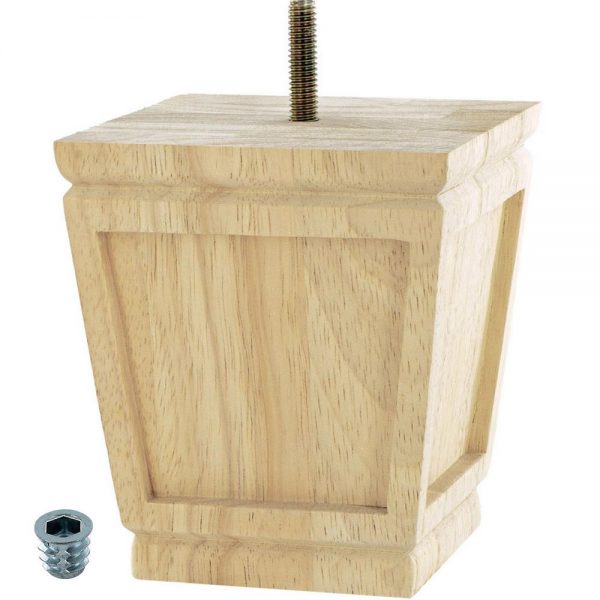 They will also raise the counter off the floor and give it some height.  Originally, I wanted casters, but as you can see in the photos above, there is no bottom plank of wood on the base of the counter.  I wouldn’t be able to screw the casters securely into four holes in each corner, and I don’t want to buy a piece of wood to retro fit into the bottom.

So that’s why I turned to wooden furniture feet and I’ll install them using these corner plates.

I’ll be able to install 6 screws into each of the holes on these metal plates and spin the furniture foot into the hole in the middle.  They’re scheduled to arrive in a few days, so I’ll let you know how they work out!

I’ll be sharing more progress on the counter as time goes by.  This week has been an odd one because we got hit by another Nor’Easter yesterday.  Southeastern PA got rocked with almost 6 inches of snow, so my plans for the week have gotten derailed a bit in lieu of digging ourselves out of the snow and waiting for PennDOT to plow the roads.  At least it’s given me tons of time to do computer work that would have gotten pushed aside to go out and run errands!

@clingonbrushes are my absolute favorite to use! I

I’m heading to @morgantownmarket today for a fab