The pieces I work on come from an assortment of random sources – friends who offload their unwanted’s, thrift shops, side-of-the-road turnarounds, etc. One day last week, a gentleman called the shop and wanted to know if we would take a dresser off of his hands. His wife had begun fixing it up with every intention of finishing it, but she hit a dead end. After seeing it, I happily said “yes” and it was hauled up the steps for a makeover.

The dresser had definitely seen better days. Between cracks in the drawers and a harlequin paint job, it was looking pretty sad. I had two plans in mind for it. One involved sanding down the drawer fronts to see what was underneath. If they were relatively awesome, I was going to try hand-painting a design. If not, I would decoupage.

After an hour of sanding outside, it was pretty obvious that decoupage would be the way to go. I had seen a post on Miss Mustard Seed’s blog from her early days where she used old sheet music to decoupage the front of a dresser. Hers turned out so beautifully that I wanted to mimic the look. 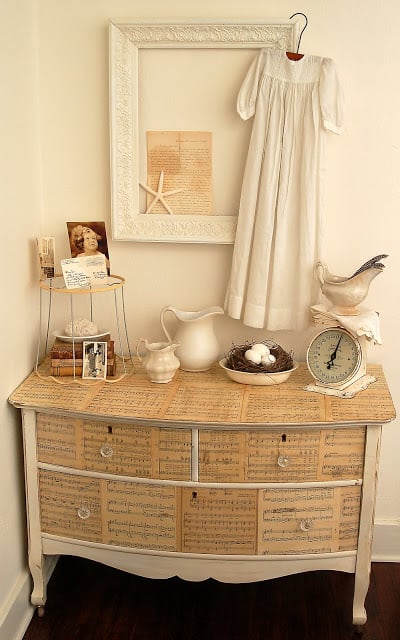 I even had an old hymn book that I bought from a local antique store and I had used it on a few projects previous to this.  After pulling it off the bookshelf at home, I set about covering up the sad looking drawer fronts. 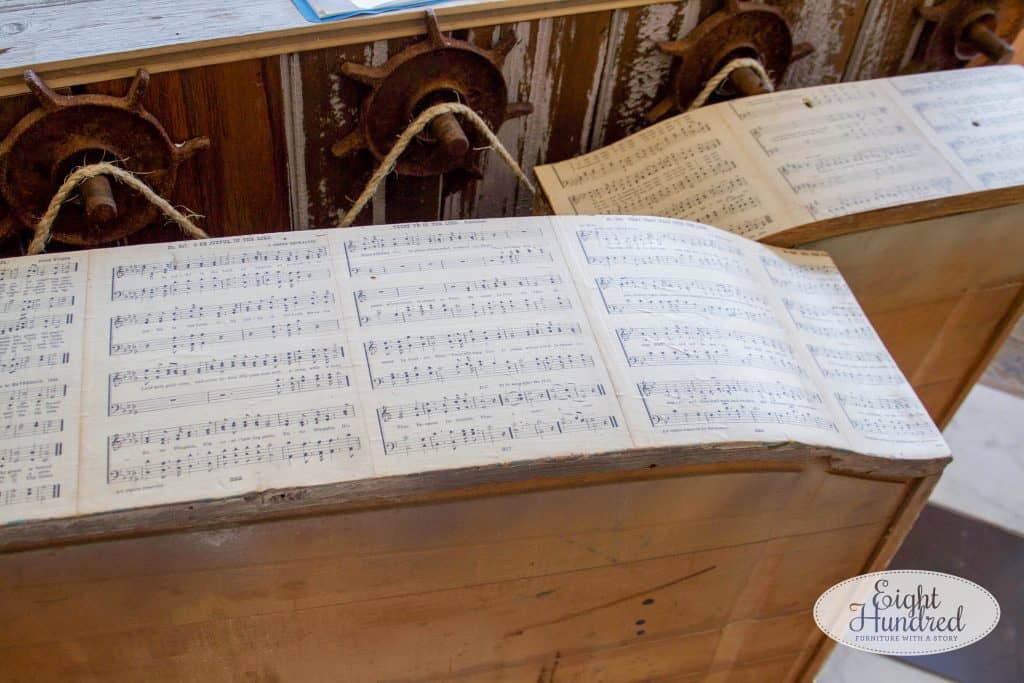 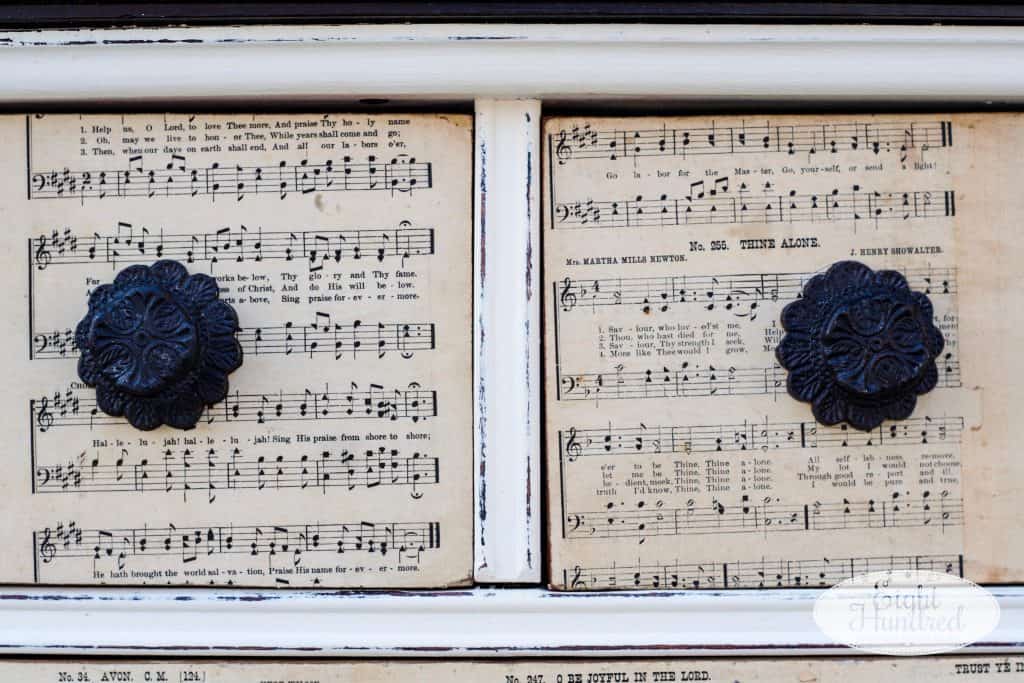 The one part of the dresser that was NOT in bad shape was the top.  It was a solid chunk of wood that looked amazing sanded down.  I used General Finishes’ Java Gel Stain to give it a new look and sealed it with their High Performance Water Based Top Coat in Satin. 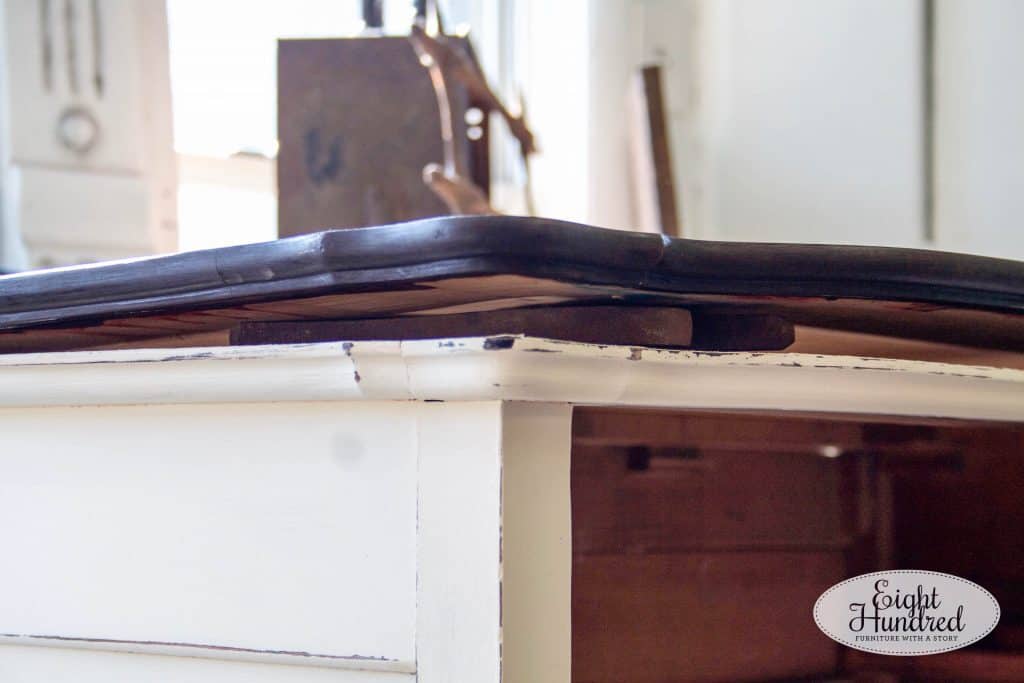 The reason why it was sandwiched open in the photo was because I couldn’t get the back screws undone.  So, I did the next best thing – propped it up so I could stain it without ruining my paint job.

Speaking of paint, the body got a few coats of Old White Chalk Paint ®.  I lightly distressed the edges with some sandpaper. 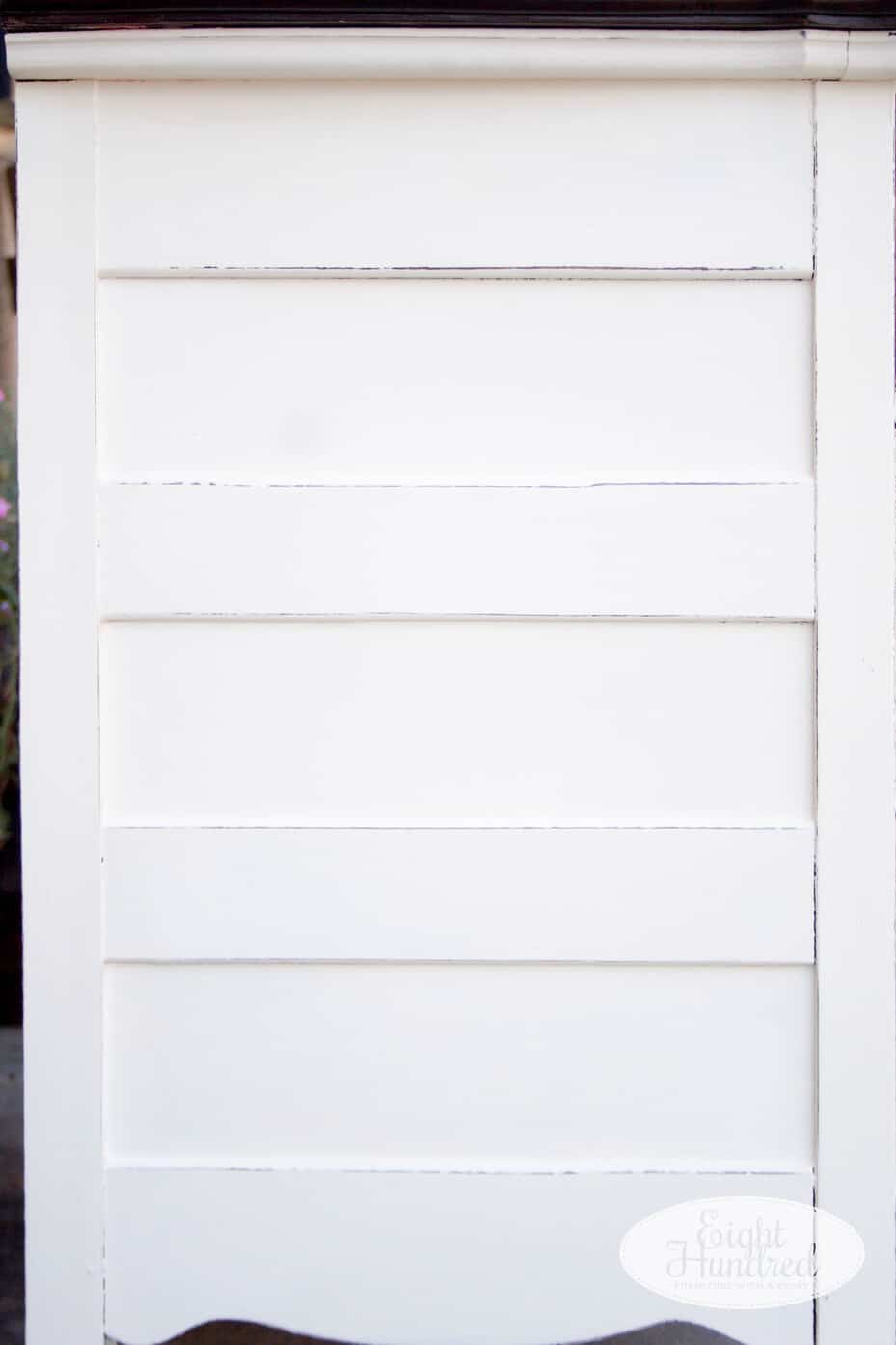 A Hobby Lobby just opened up in my neck of the woods (happy dance) and I picked up new hardware for the drawers. 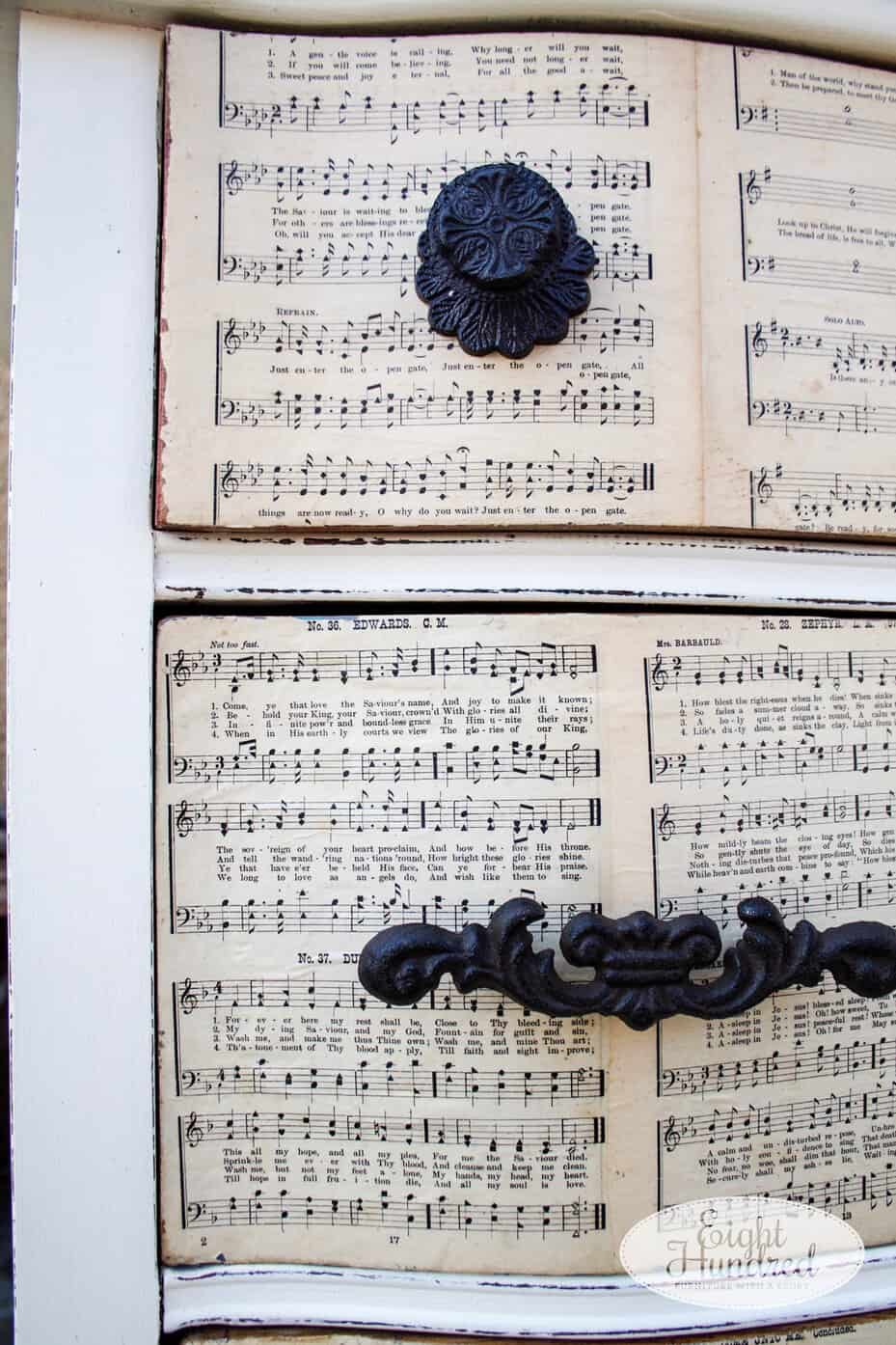 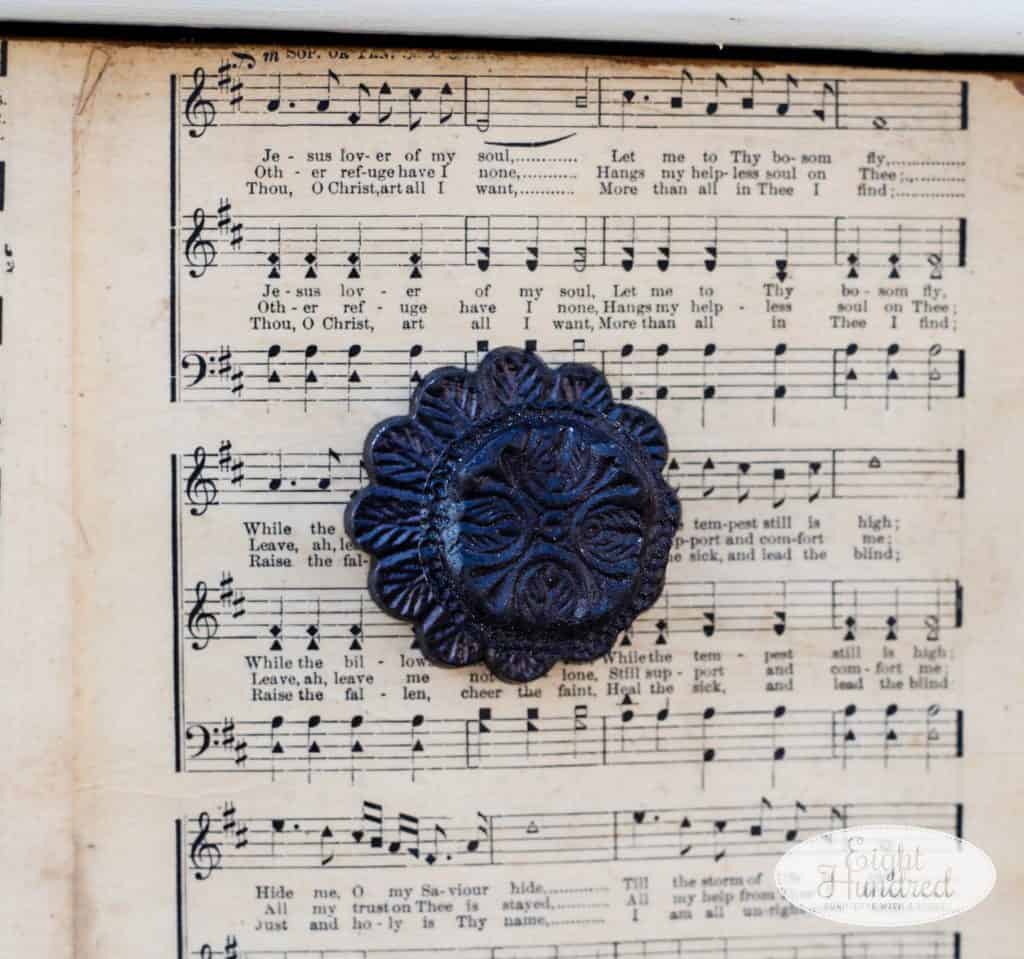 Here is the final piece all put together: 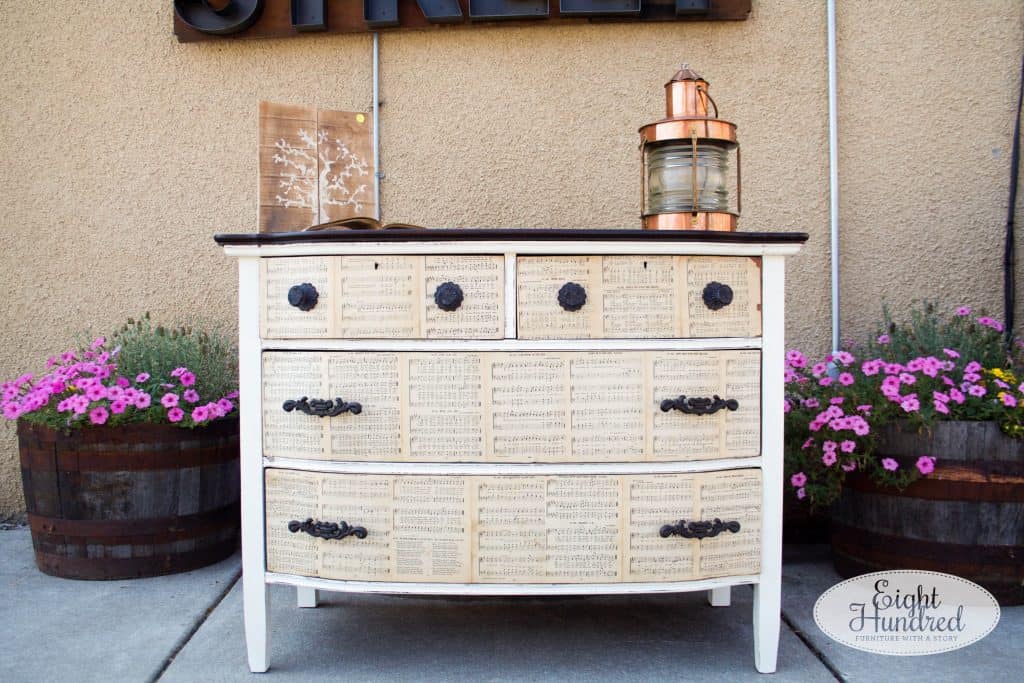 I’m absolutely thrilled with how it turned out. 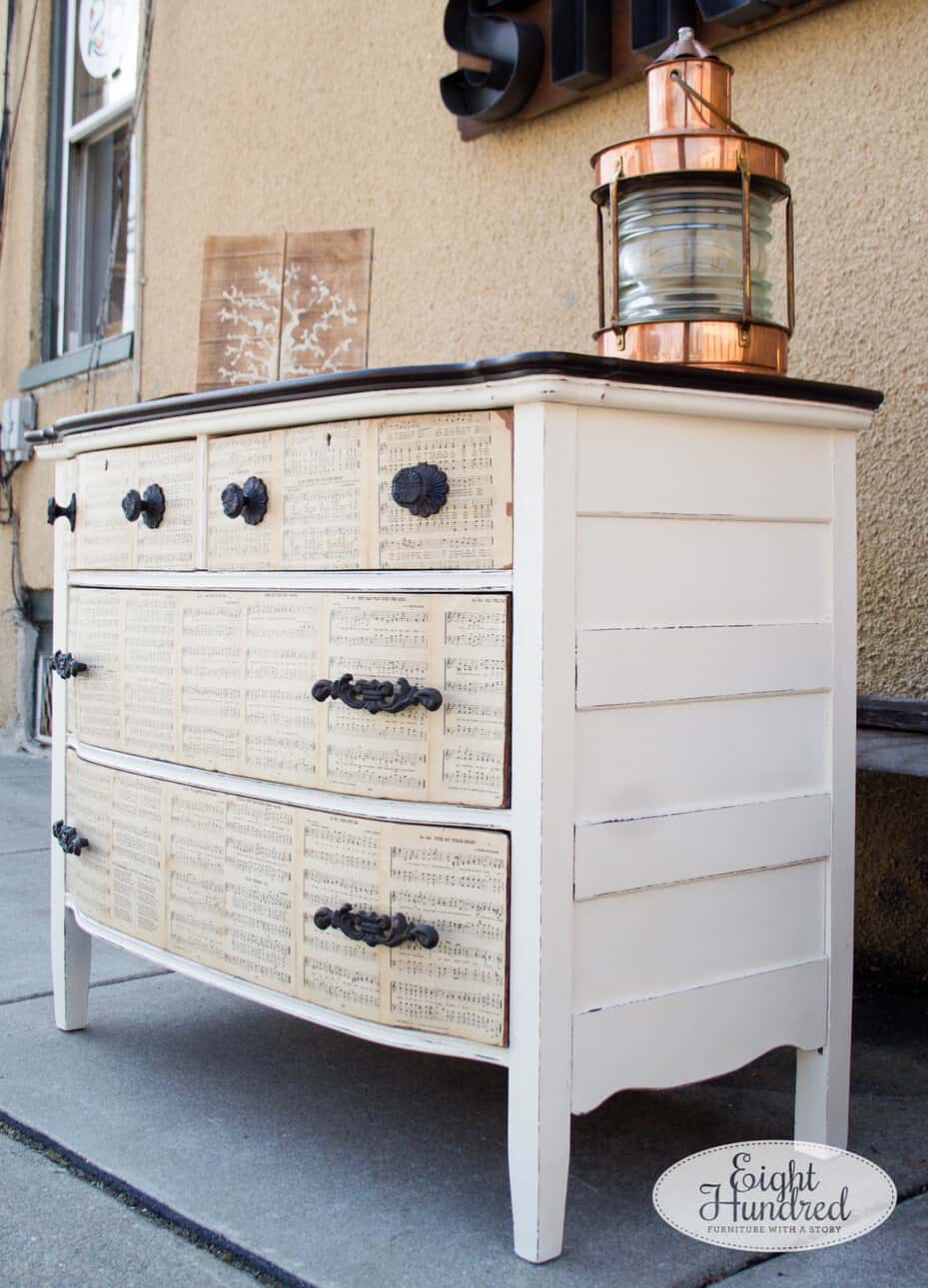 The contrast between the dark top and light body is really stunning. 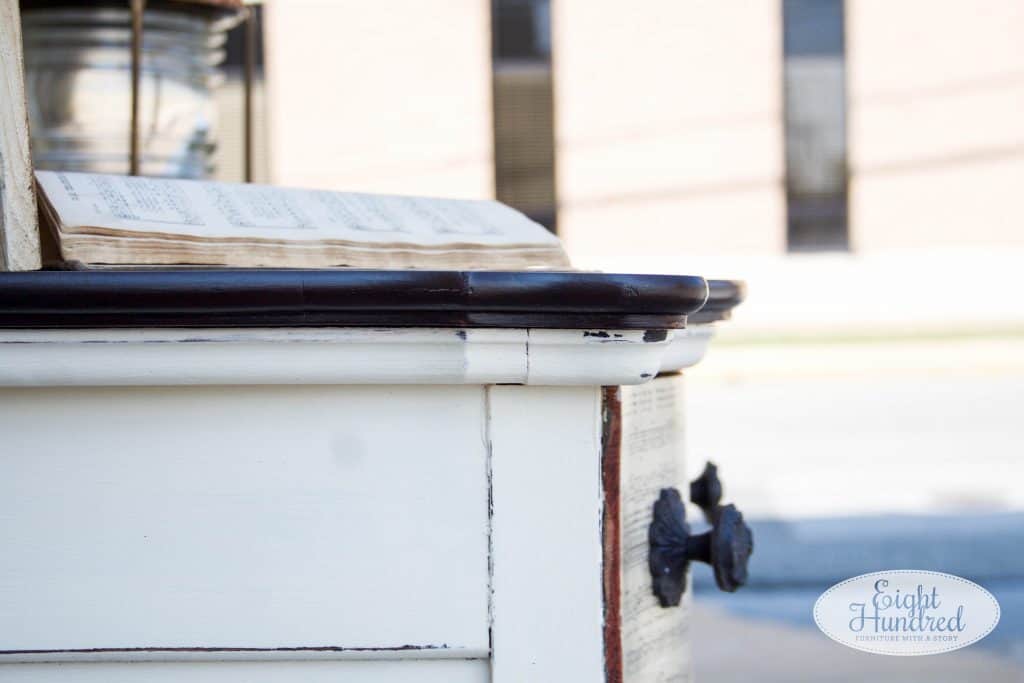 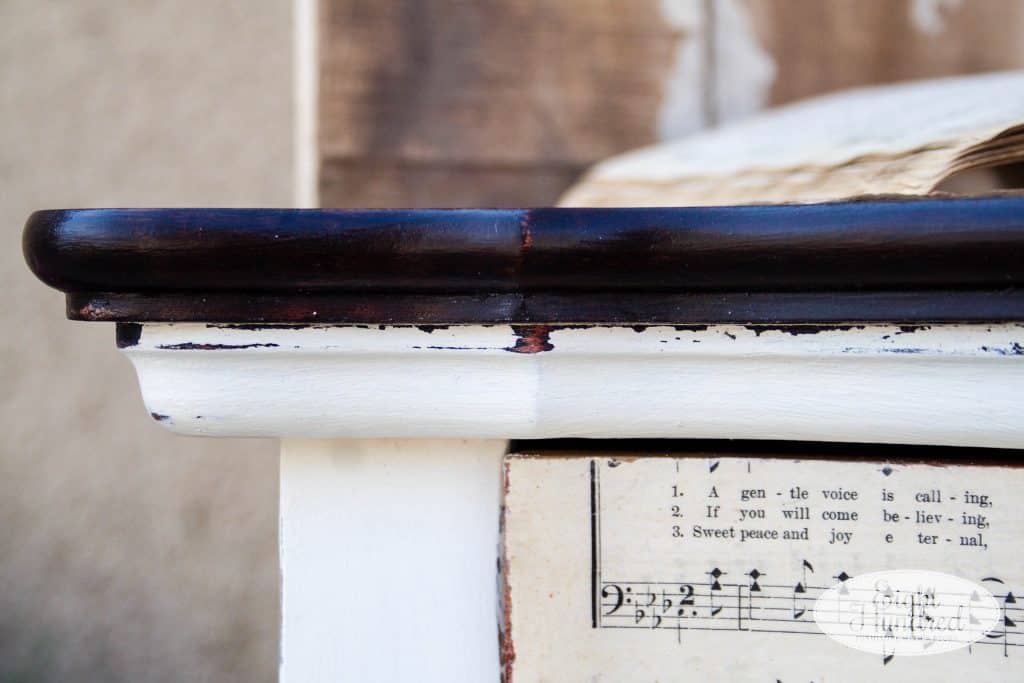 At Love Street, we name each of our pieces.  As I considered what to name this piece, my thoughts drifted to a very dear woman at my church.  We met at the Tuesday night Precept Inductive Bible Studies I attend (and now teach).  She was my prayer partner and we kept in touch ever since.  She also worked in the church office and had a smile on her face every time I saw her.

Her name was Evie, and she went home to be with the Lord this year.  Evie had cancer and didn’t tell many people.  When I heard of her passing, I had mixed emotions.  I was so happy to know that her suffering was over but the void she left behind is still felt.

Evie was a light to those around her. 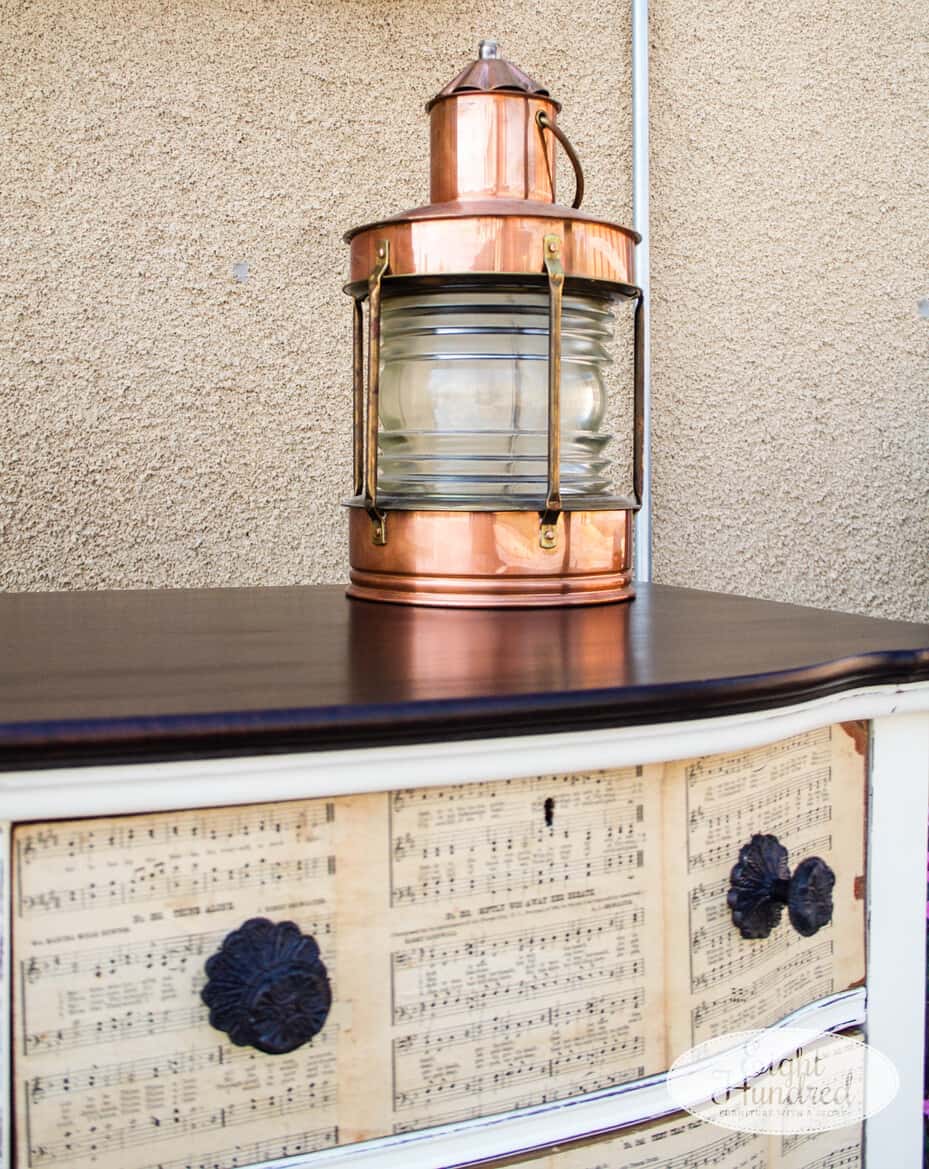 Even in her suffering, she was anchored deeply in the Word of God. 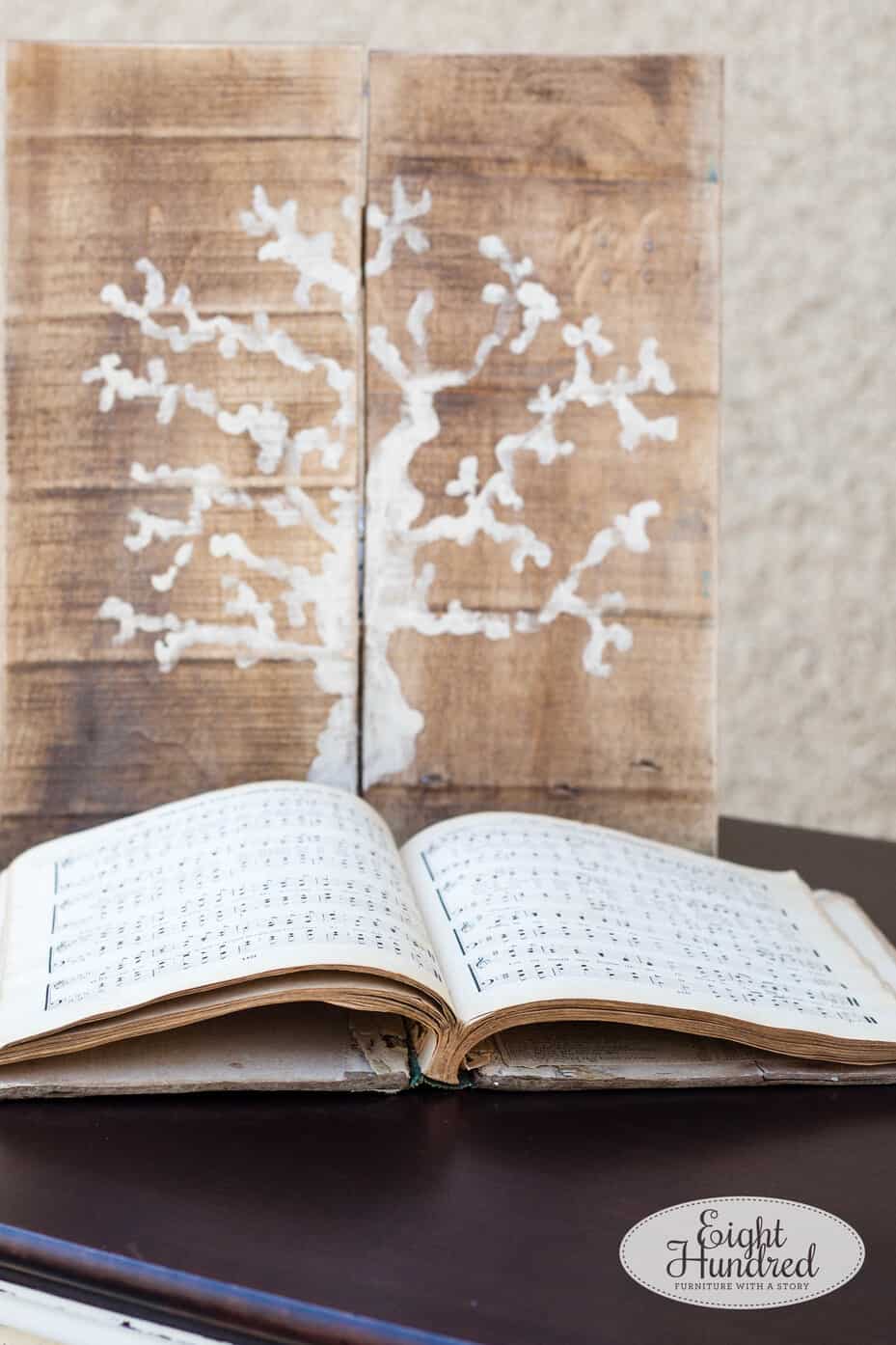 She still found reasons to praise the Lord and she encouraged others to do the same. 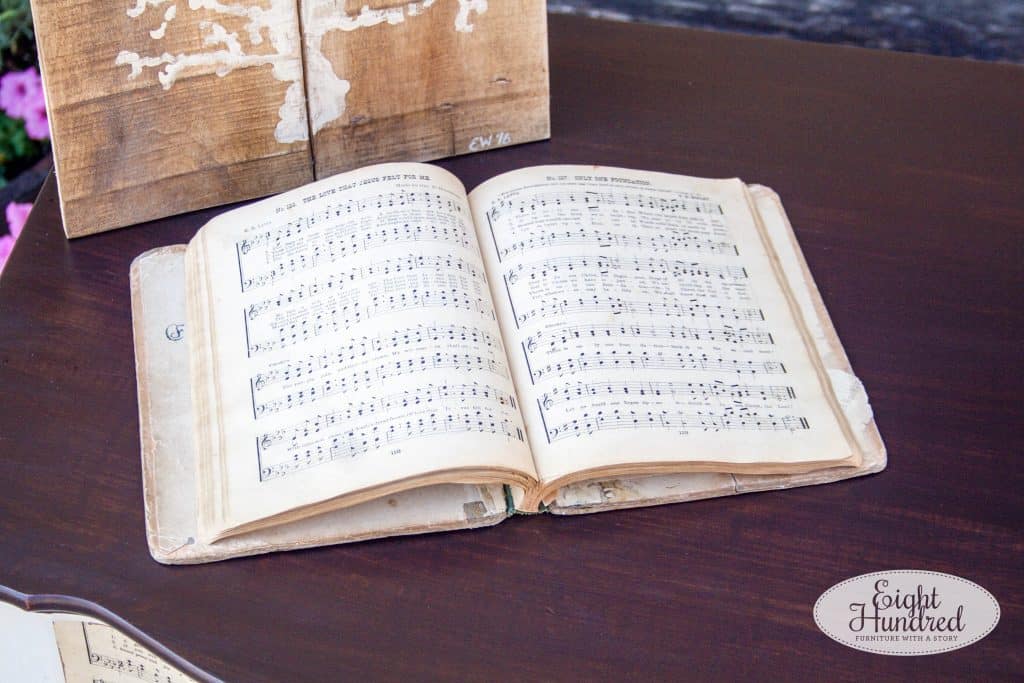 So it seemed fitting that this dresser should be named Evie. 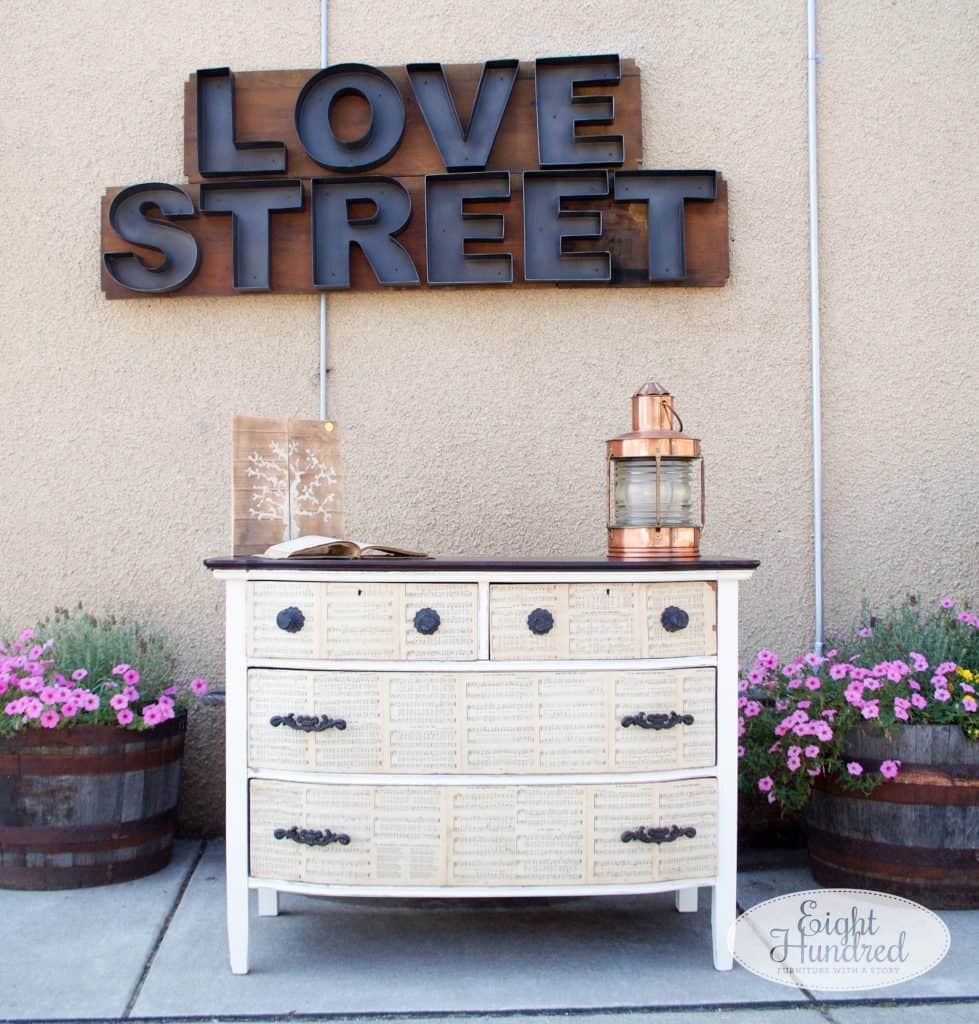 If you’d like to see other sheet music pieces I’ve worked on, try these blog posts:

@clingonbrushes are my absolute favorite to use! I

I’m heading to @morgantownmarket today for a fab