I recently acquired this piece from the owner of Morgantown Market.  She has a fabulous eye for antiques and I was able to purchase this piece from her at a very reasonable price. 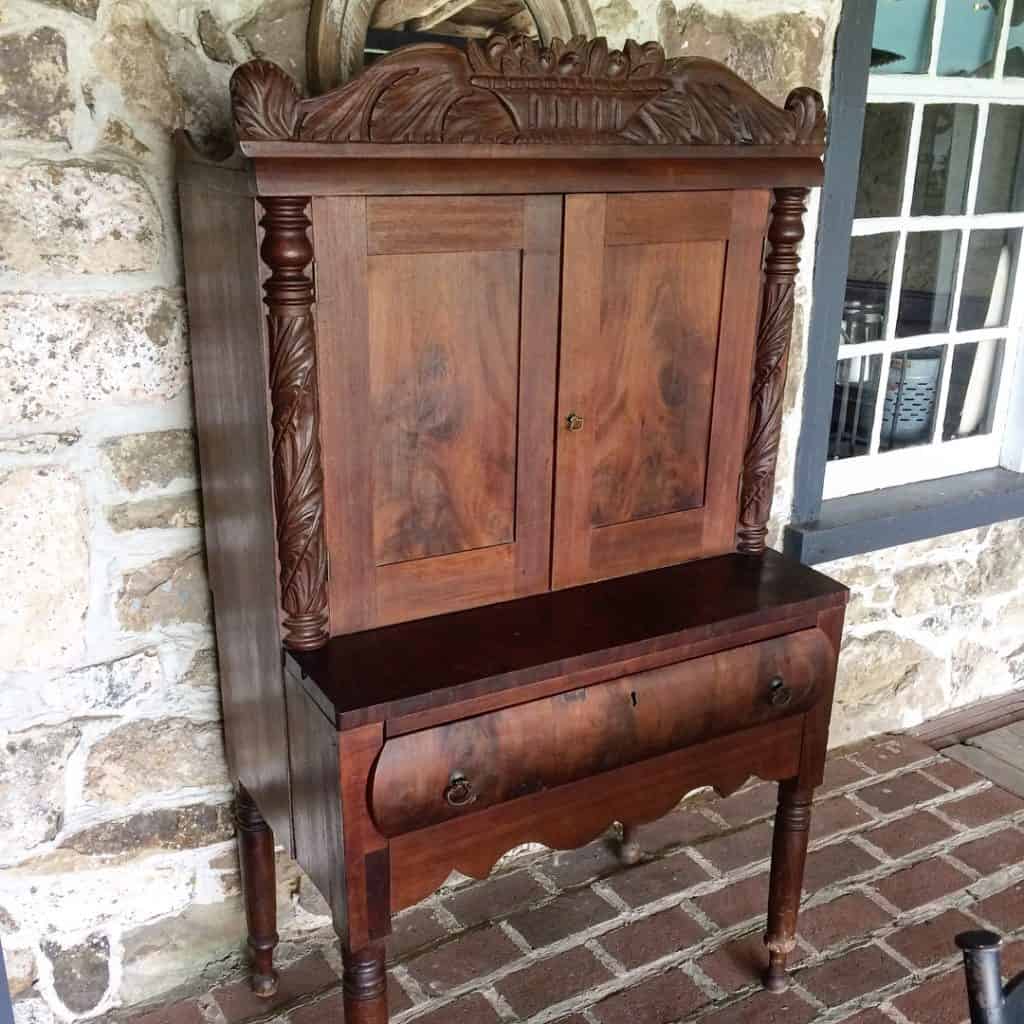 This piece ticked all of the boxes that I look for when selecting a furniture project.  It had interesting details such as these carvings down the side. 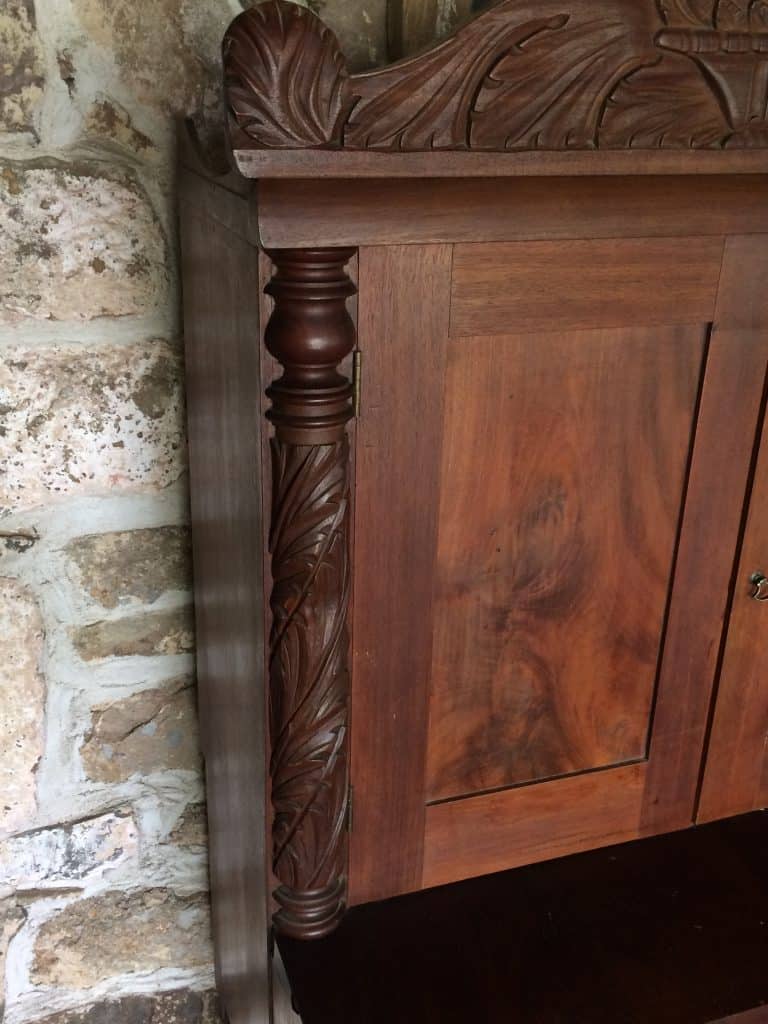 This carved fruit basket adorned the top like a crown jewel. 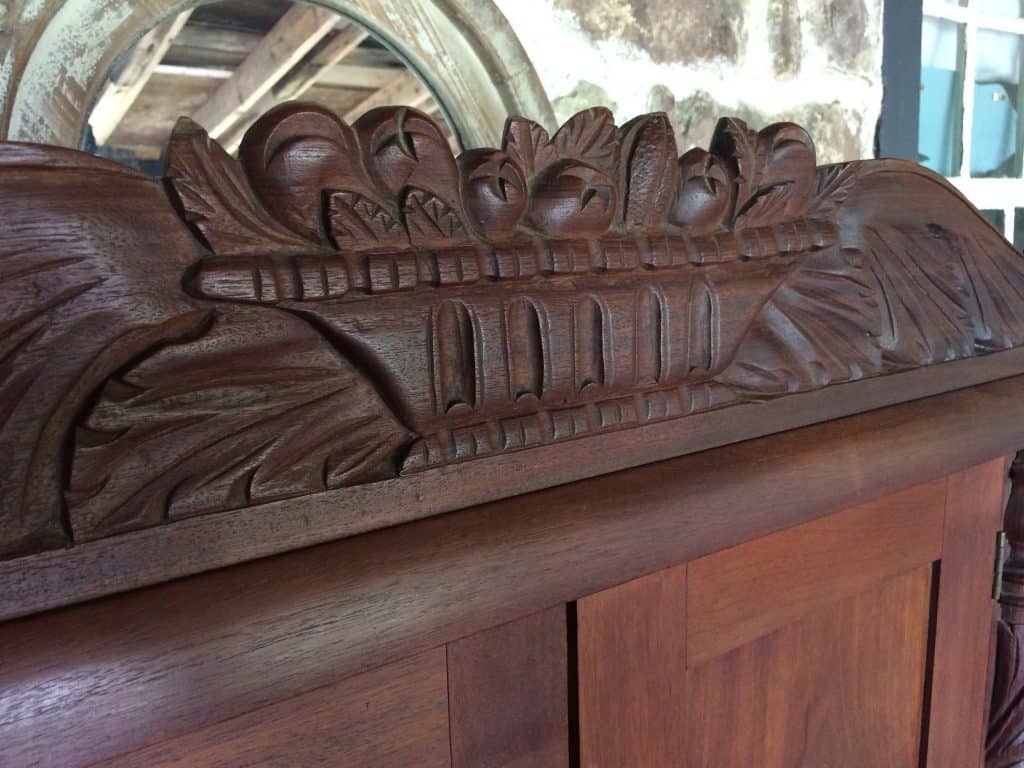 It was all one piece and its construction was 100% solid. 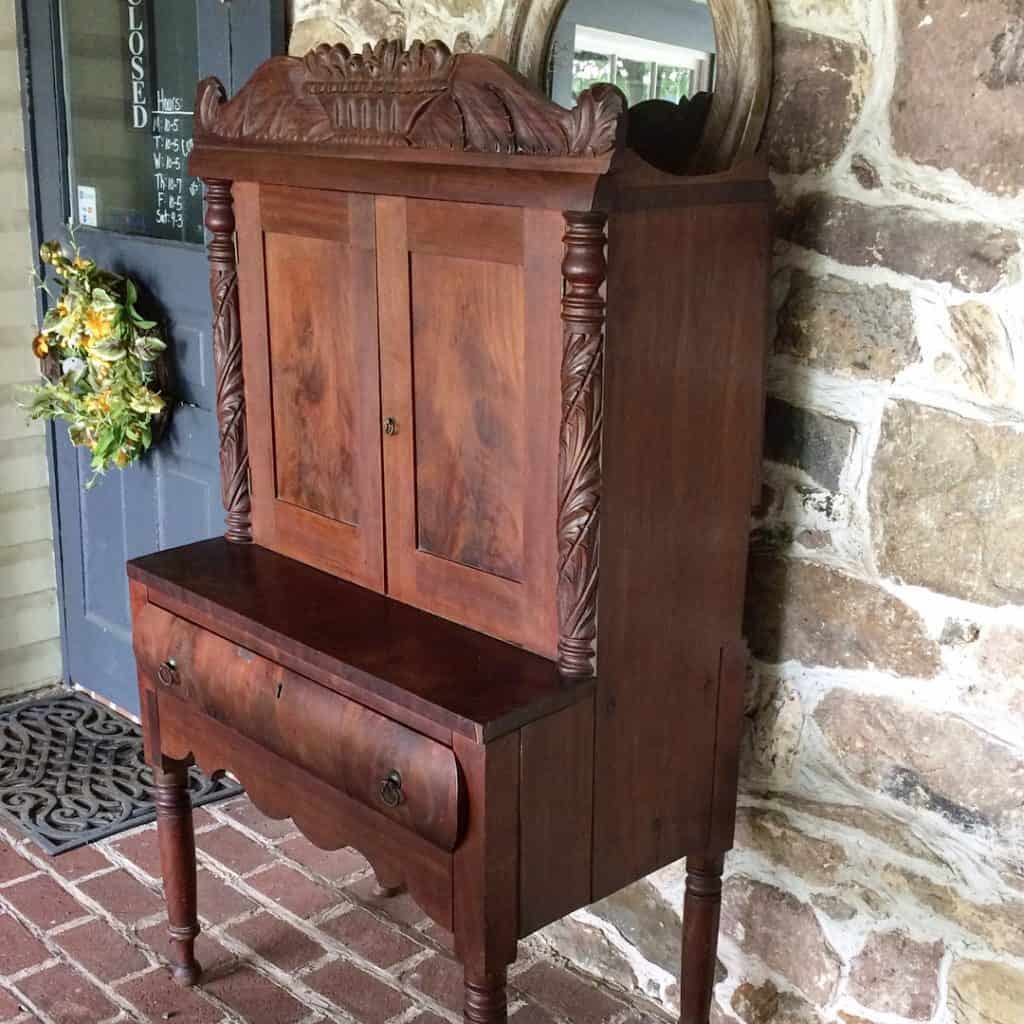 It also had a pleasant and unexpected surprise inside – cubbies! 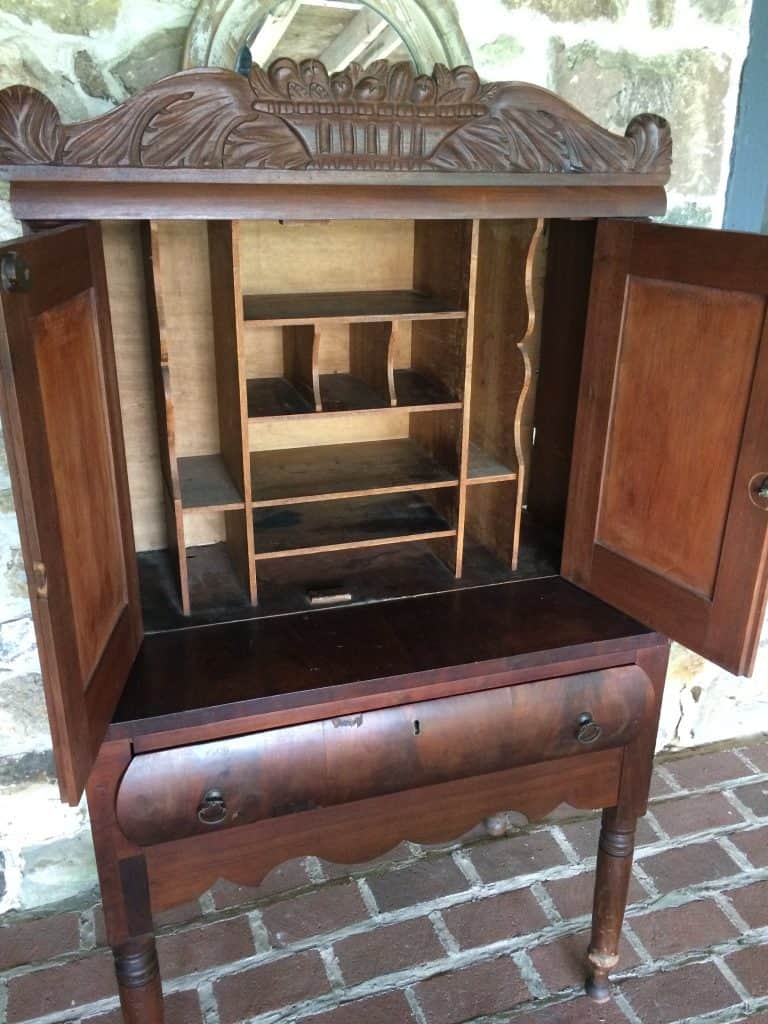 In my eyes, it was a perfect candidate for Milk Paint.  While the wood was pretty, it was really dark and kind of on the orangey-reddish side.  I thought it would look fabulous all done up in Milk Paint.  Out of curiosity to see what other people would do with it, I posted some photos of it on the Miss Mustard Seed’s Milk Paint Instagram feed (which I manage) and asked followers what they would do with it. 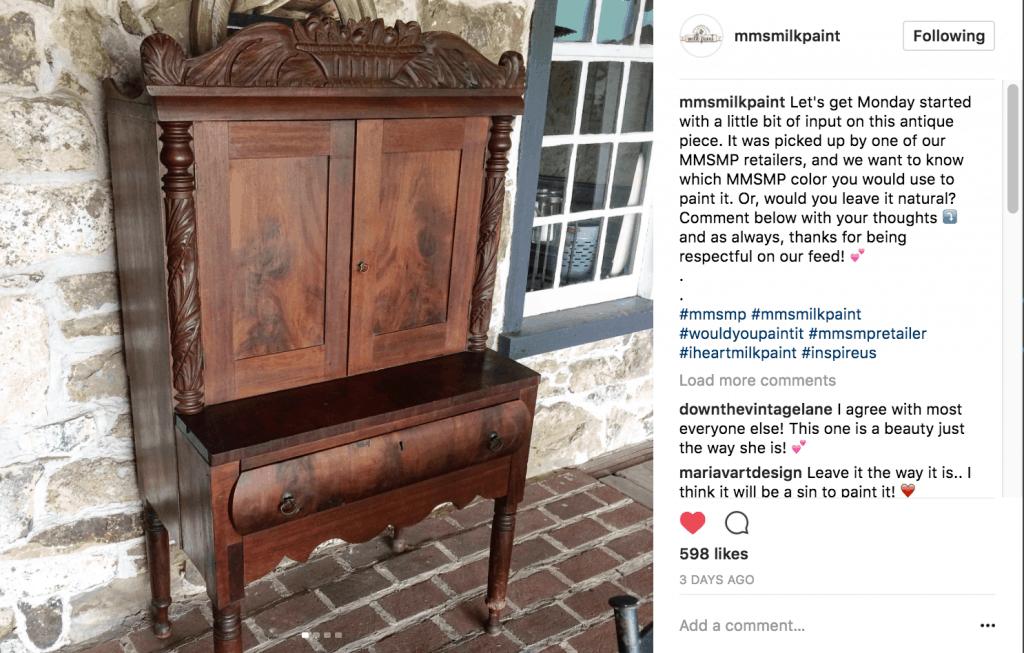 Little did I realize how much buzz the post would create!  Almost 600 likes and over 200 comments later, it became very obvious that folks definitely wanted to talk about its makeover.  The majority said they would not paint it.  Just a bit of Hemp Oil was all that was needed. 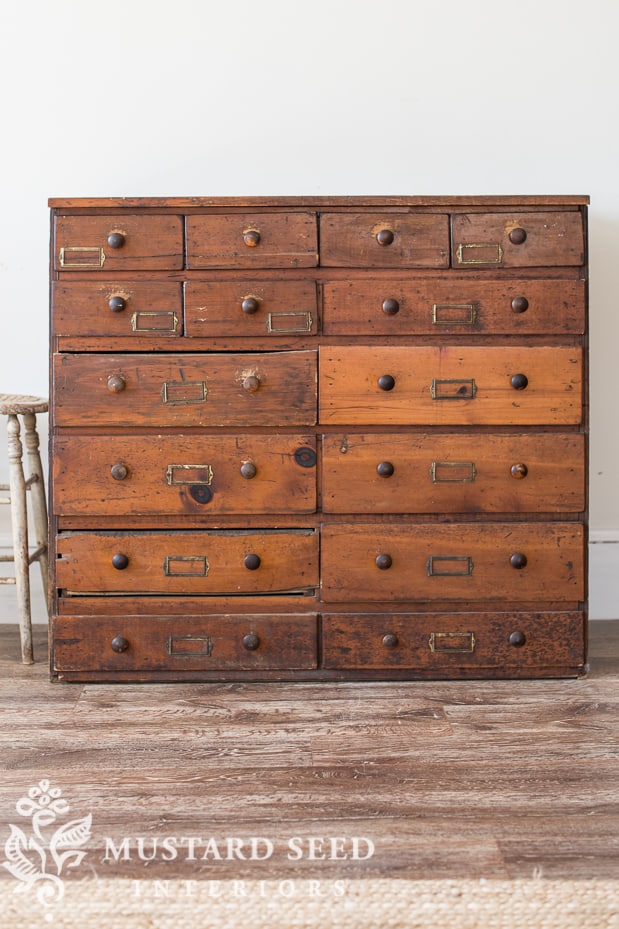 She wrote, “Unless someone is being downright nasty on a personal level, which is rare, it doesn’t bother me if someone disagrees with a decorating decision I make or they don’t like something I made, bought, etc. If ever I do feel ruffled, I figure that I probably wouldn’t like every single decorating decision they make, either, and that makes me smile. We’re all different and that’s okay.”

Boy did those words encourage me! I definitely felt “ruffled” by some comments that I received regarding this piece on my social media feeds. No one was being “downright nasty”, but there were a few rude comments that were rather unnecessary and a bit dramatic. I couldn’t stop thinking about them during the entire time I worked on this piece, which was about 3 full days. I pondered why I was so worked up. It’s my piece of furniture, right? I’m the one that bought it, packed it up, and trucked it out of the store. Shouldn’t I get to decide what happens to it from that point forward? Why should the opinions of other people matter?

In the end, I concluded the reason why I got so worked up was because I had a clear vision for the piece – one that happened to be the exact opposite of what everyone else thought. Typically, that’s not a position I find myself in, and it gave me the chance to truly own and stand firm in my creative stance.

I envisioned the piece looking fabulous in a lighter color with the carvings distressed and the inside all Hemp Oiled to perfection. I thought it looked way too dark and boring the way it was. It simply wasn’t my kind of pretty and if I was going to put my Eight Hundred Furniture tag on it, it needed to look like a piece that I was proud of putting up for sale.

Not only that, I gave this piece ample time to be on the sales floor at Morgantown Market. That way, someone who loved it just the way it was could scoop it up and keep it natural. No one did, so it became my piece. In the end, those were enough reasons for me to feel good about my decision to paint it, although it did take me a while to get to that point.

I first applied a layer of Tough Coat to seal in all of the dark wood stain.  I didn’t want any of it bleeding through my finish. 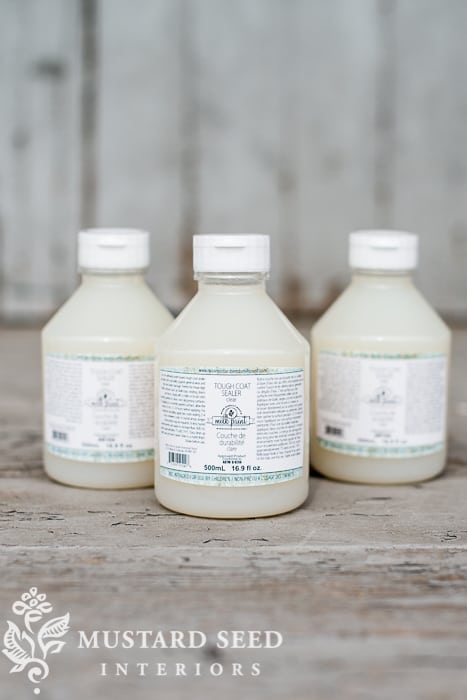 After the Tough Coat had fully and completely dried, I applied two coats of Miss Mustard Seed’s Grain Sack. 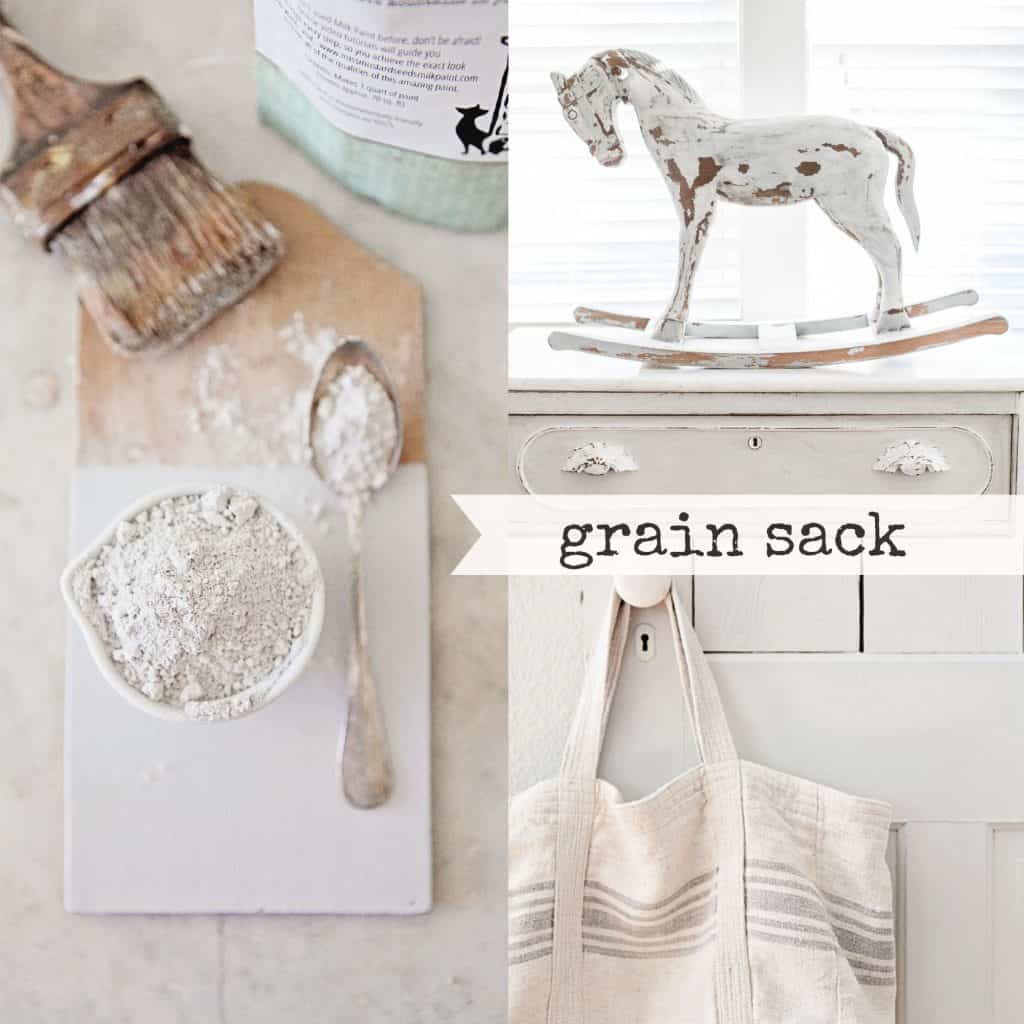 This color is my go-to if I want a piece to be light and airy, but have a whisper of gray.  Grain Sack gets its color inspiration from the faded quality of antique grain sacks, and it’s a beautiful option if you’re looking for a neutral.  Because it has slight gray tones to it, it covers quite well!

I did run into bleed through in some spots, so I applied Tough Coat over them and applied a third coat of Grain Sack.  After applying Hemp Oil on the inside and outside, the piece was looking the way I had envisioned it. 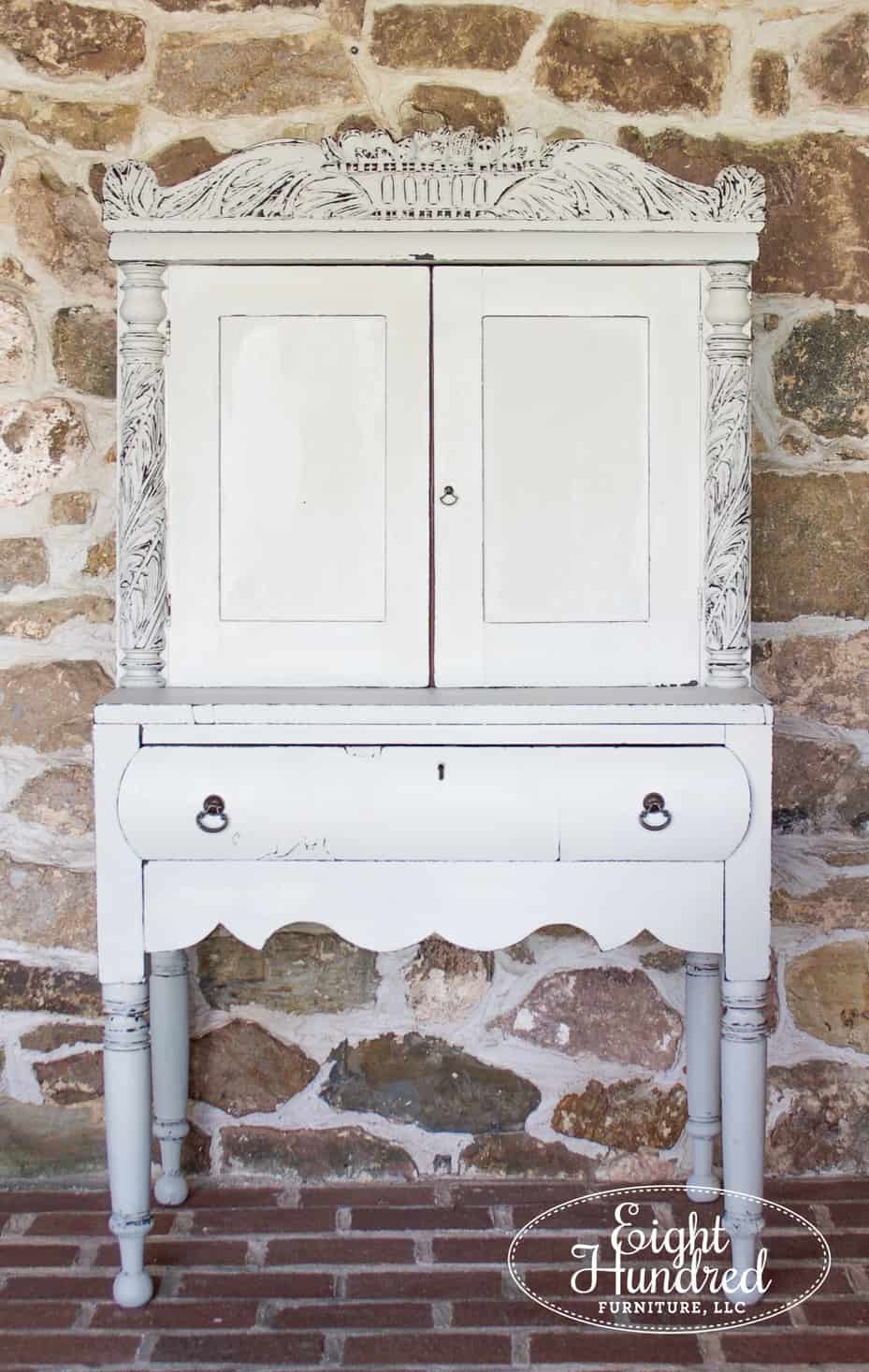 It was light, airy, and perfectly distressed.  When I took these photos, I had literally just finished applying Hemp Oil, so the shiny patches here and there were just the oil drying.  As time goes by and the oil cures, they will disappear.

I distressed around the edges and hit the spots where the veneer had chipped away over time on the front drawer.  This piece had age to it and there was no need to hide that.  It was all gorgeous character. 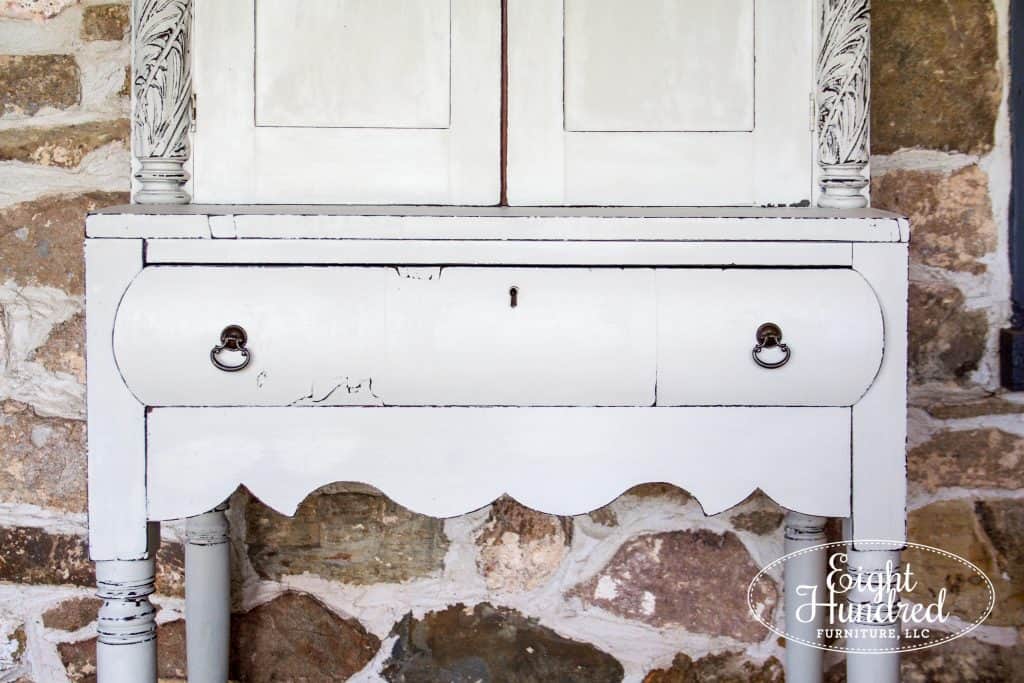 The original hardware was shined up with some Hemp Oil and you could actually appreciate it because it wasn’t up against such a dark background. 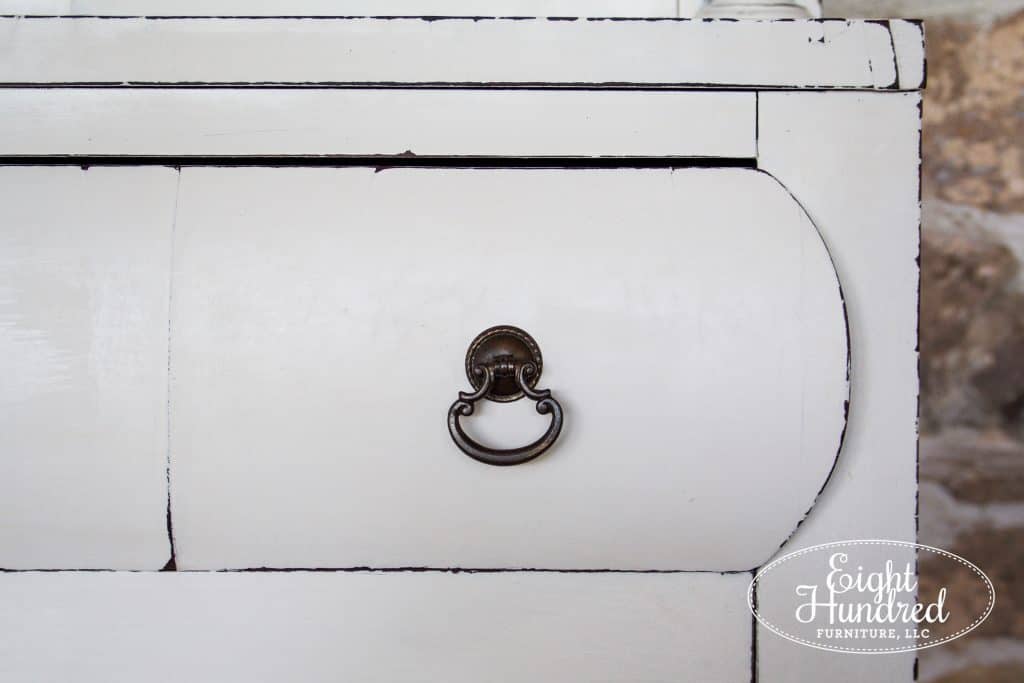 The drawers had beautiful skinny dovetail joints – another clear sign that this piece was old and had history to it. 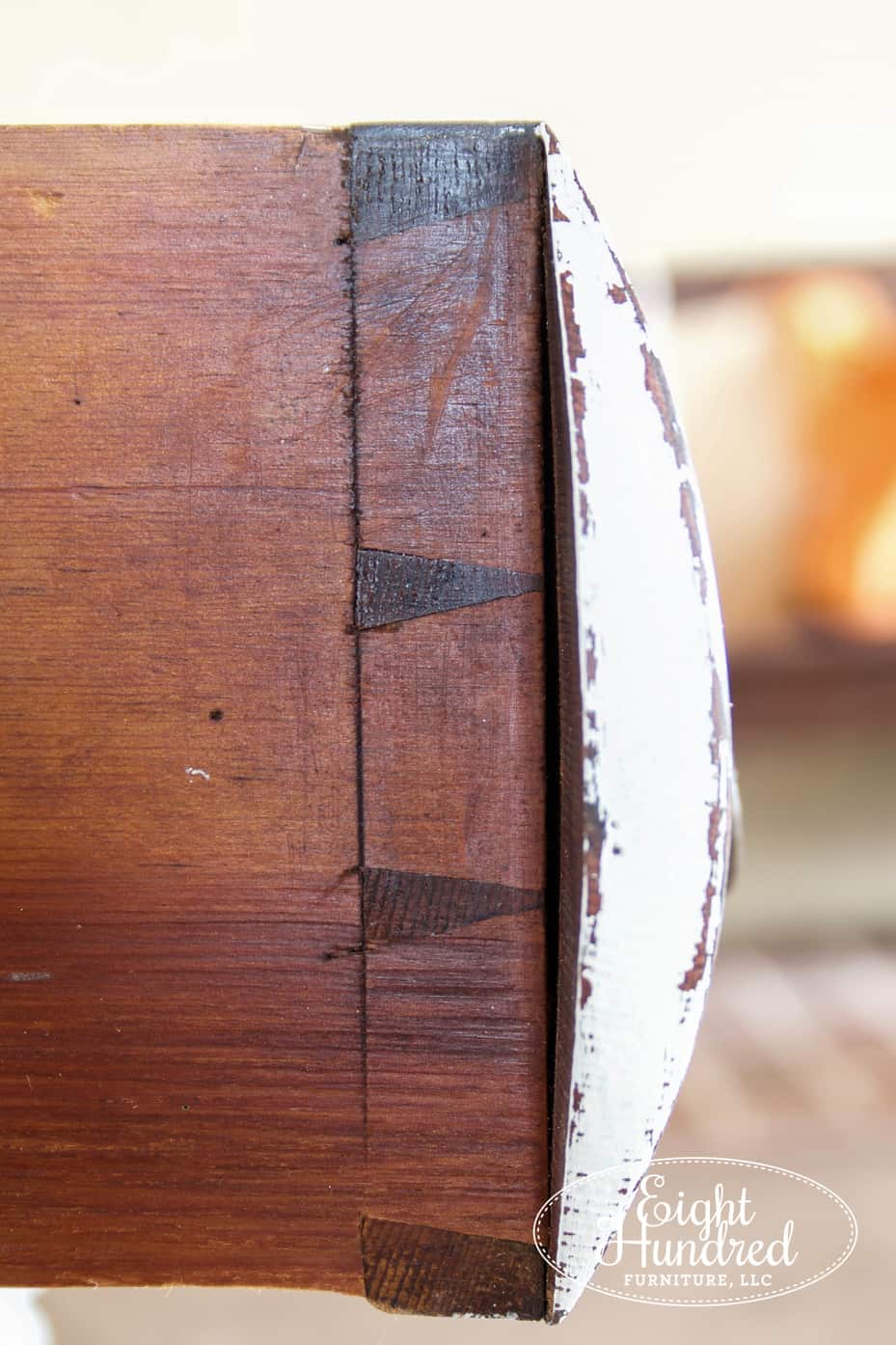 My favorite parts of the outside were the carvings, hands-down. 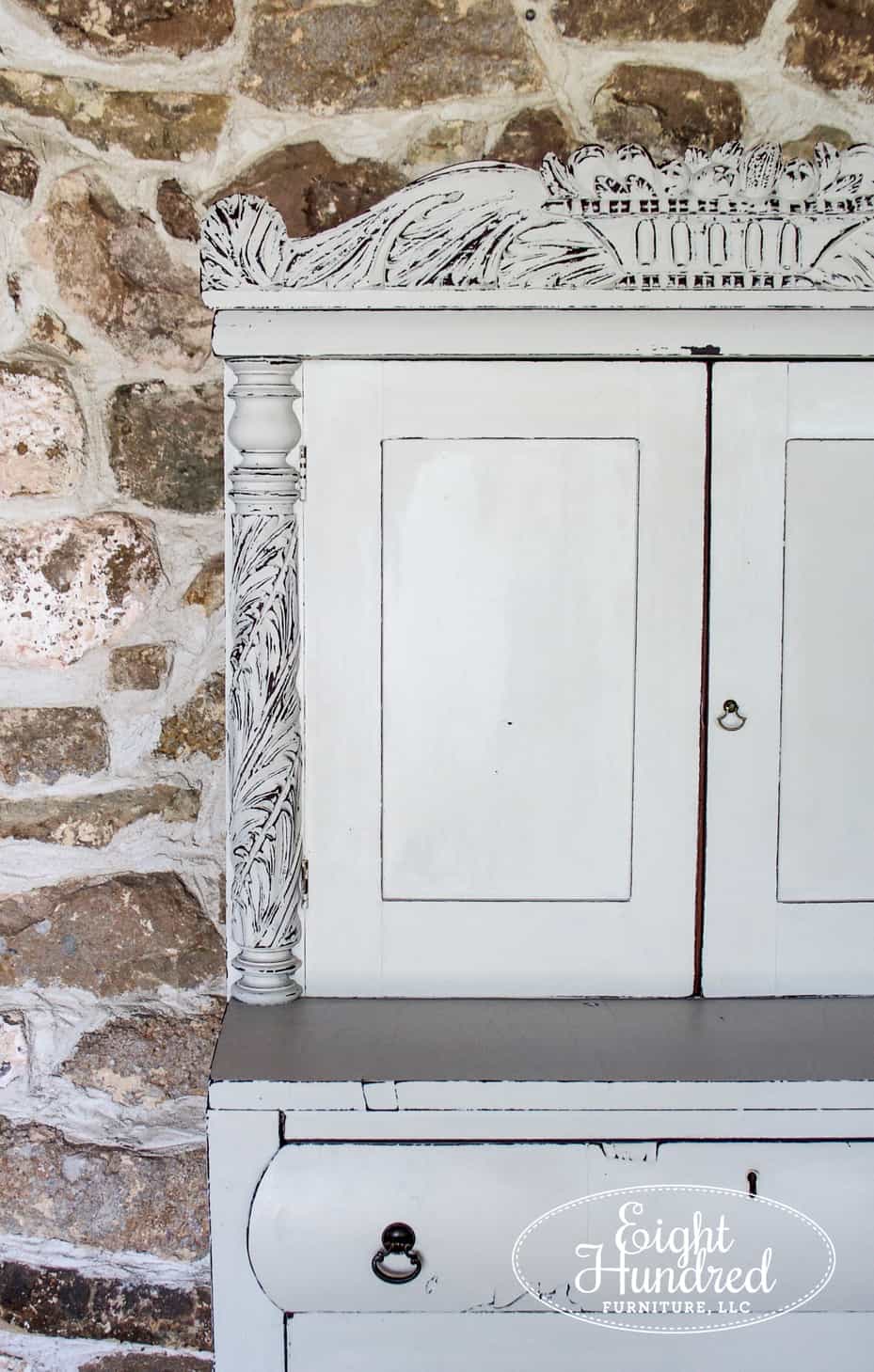 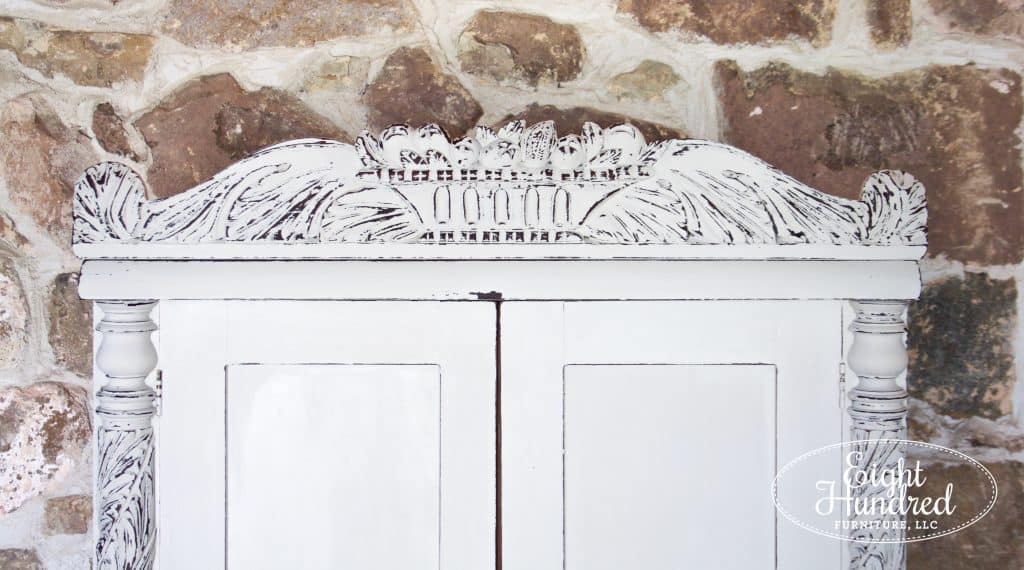 The wood underneath took on a rich dark tone from the Hemp Oil and I was crazy about the contrast. 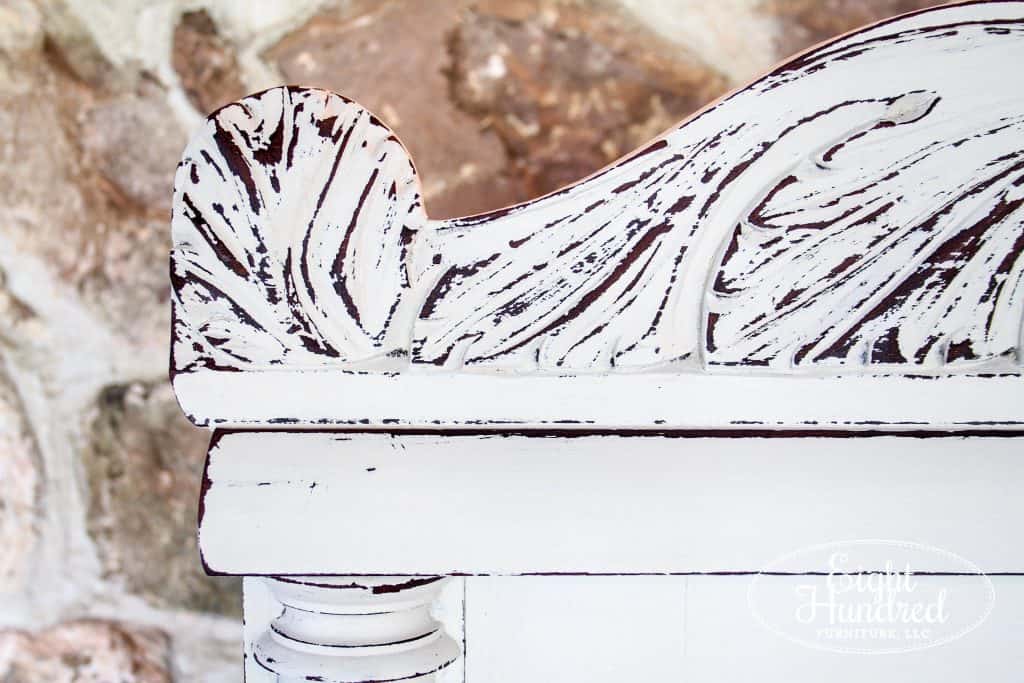 The fruit basket on the top was just yummy. 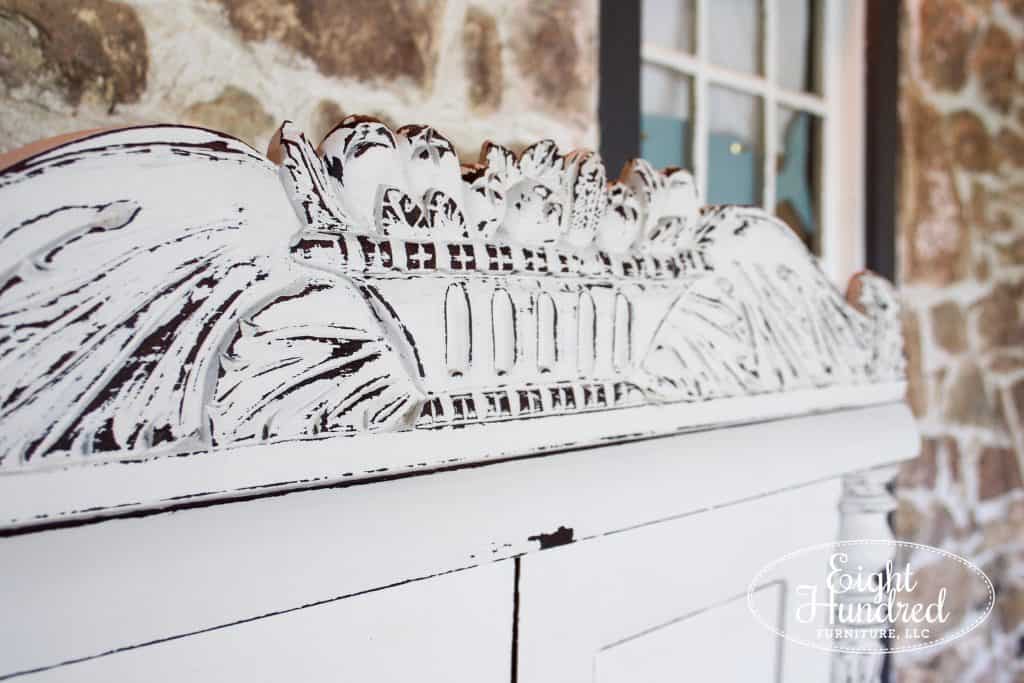 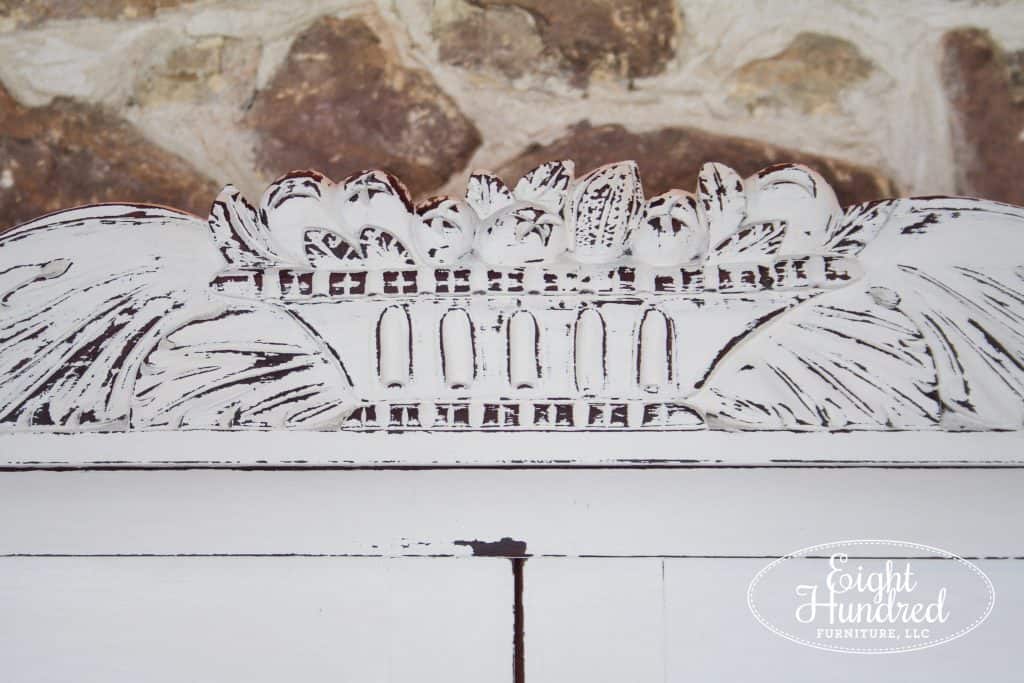 As if the outside wasn’t pretty enough, the inside was just as beautiful.  Hemp Oil hydrated all of the dried out cubbies and they looked absolutely fabulous.  I staged them with neutral goodies from Painted Table Designs.  Literally everything you see in this picture is currently for sale at the shop.  (Doesn’t the owner, Brenda, have excellent taste?) 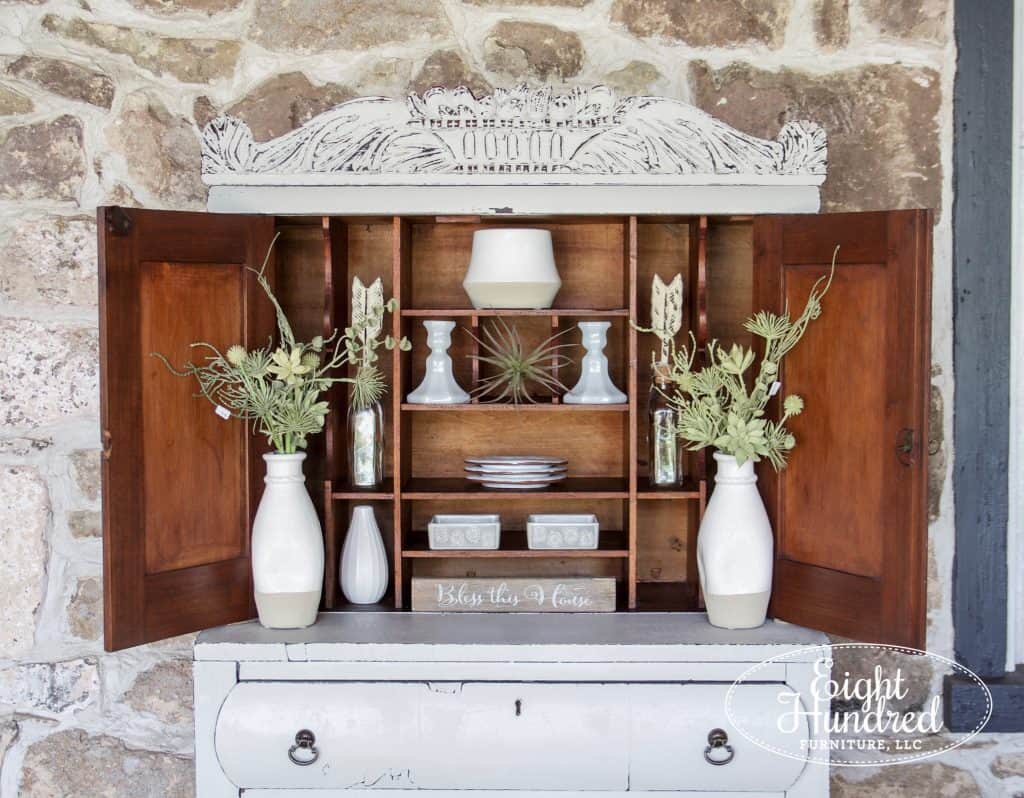 At least I left the inside natural, eh? 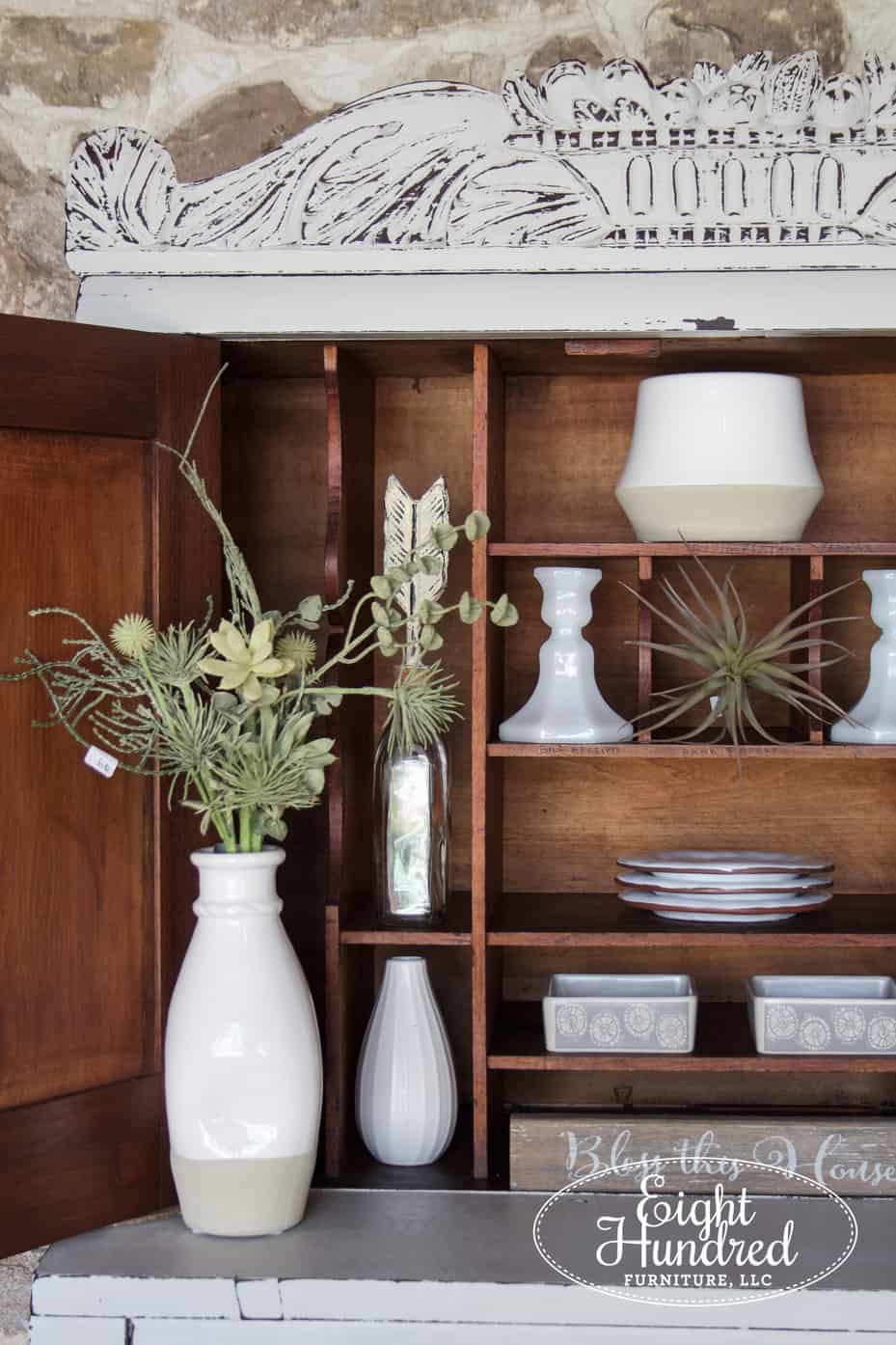 Check out the sweet penciled labels on the shelves! 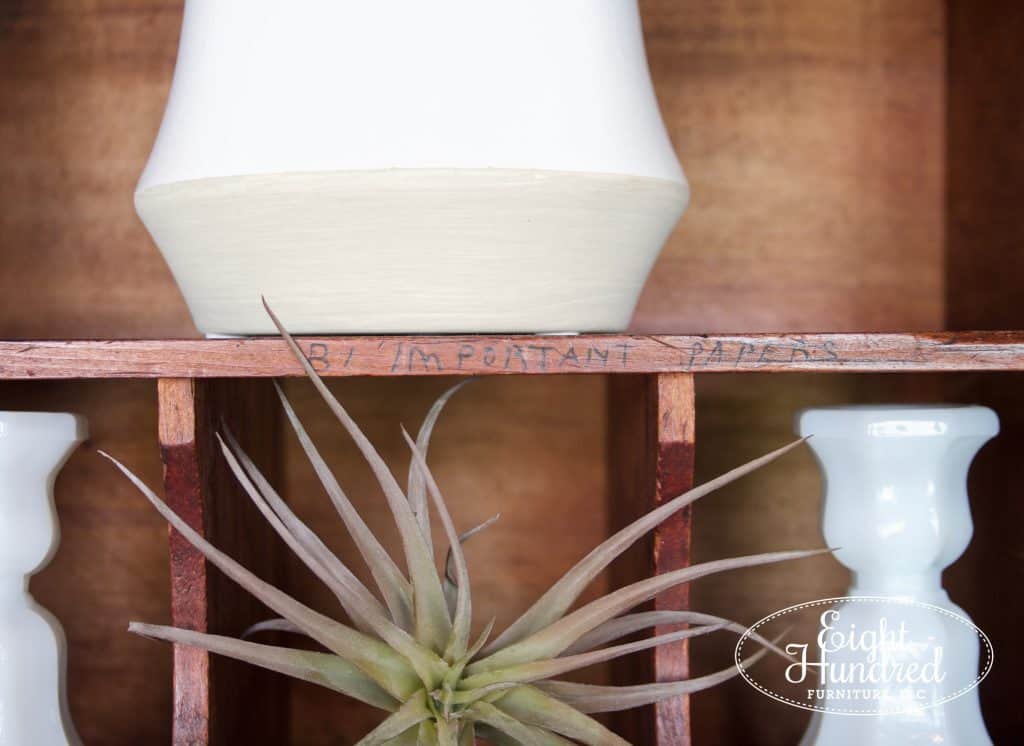 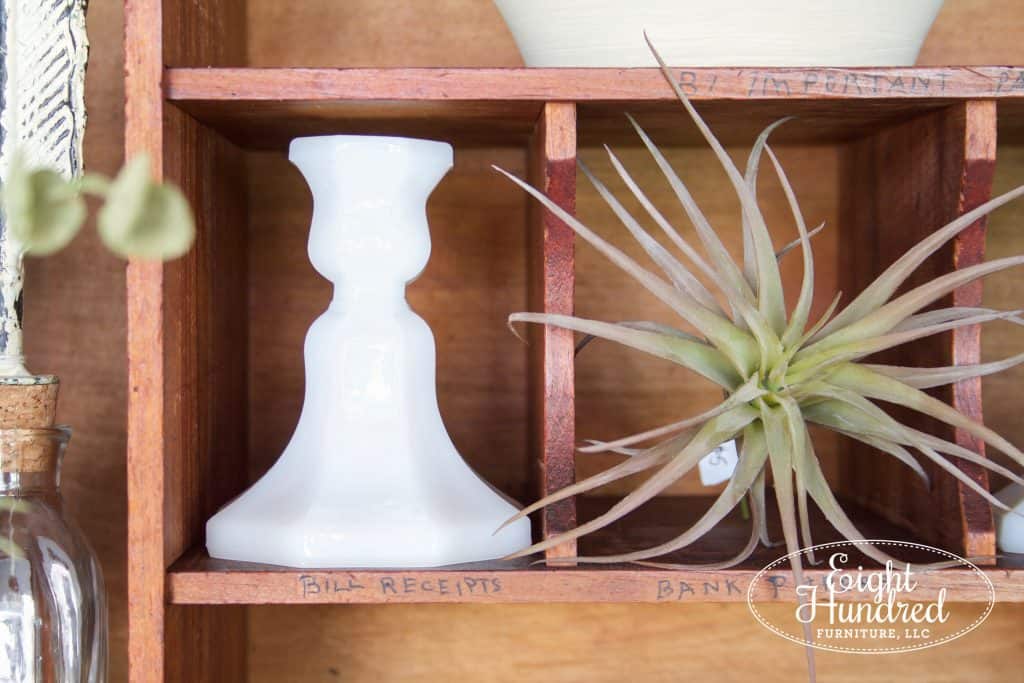 The right door had a swivel handle with a latch so the doors stayed shut. 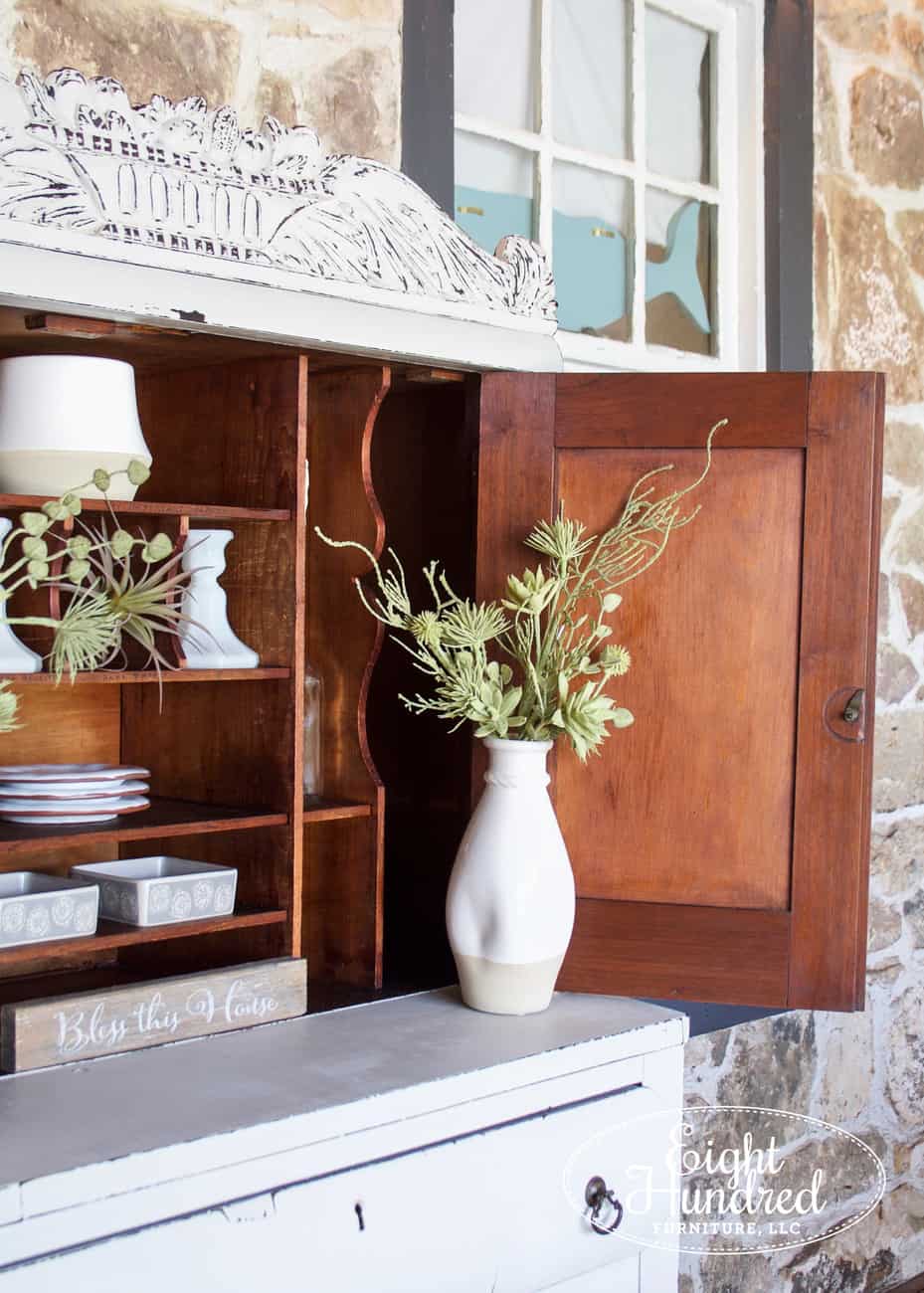 The left door had one too, but it was up at the top. 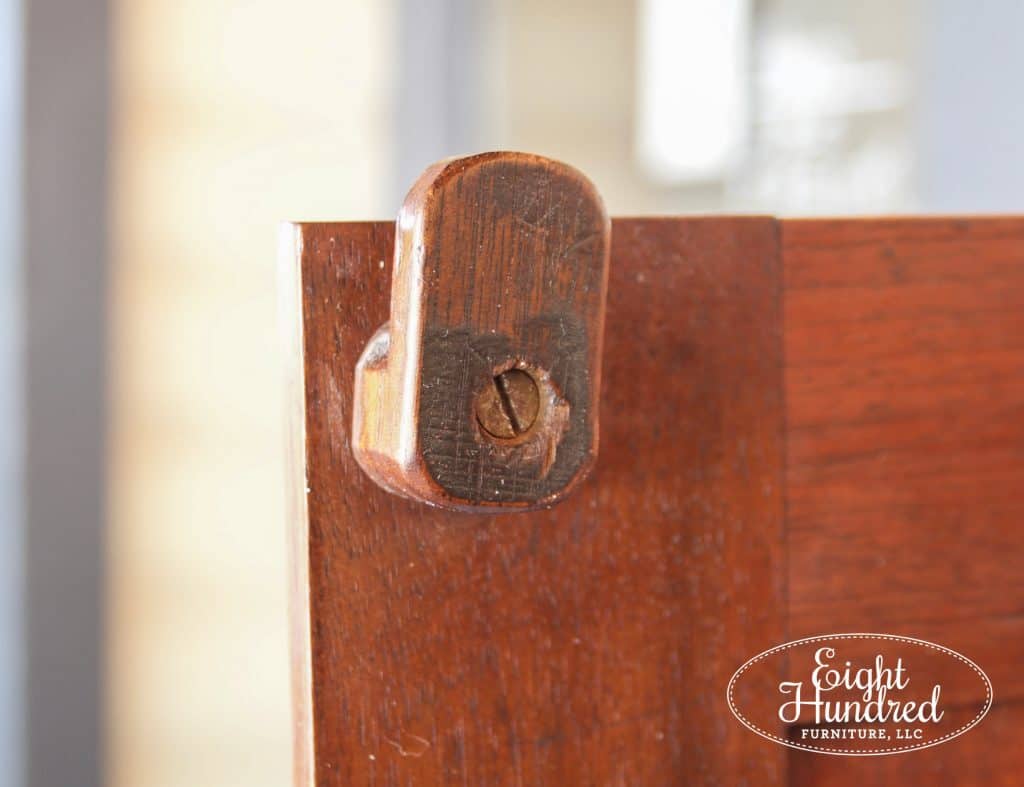 I definitely do not regret my decision to go with my gut on this piece.  I’m so happy with the way it turned out and it’s exactly how I envisioned it would be.  Now it looks like my kind of pretty! 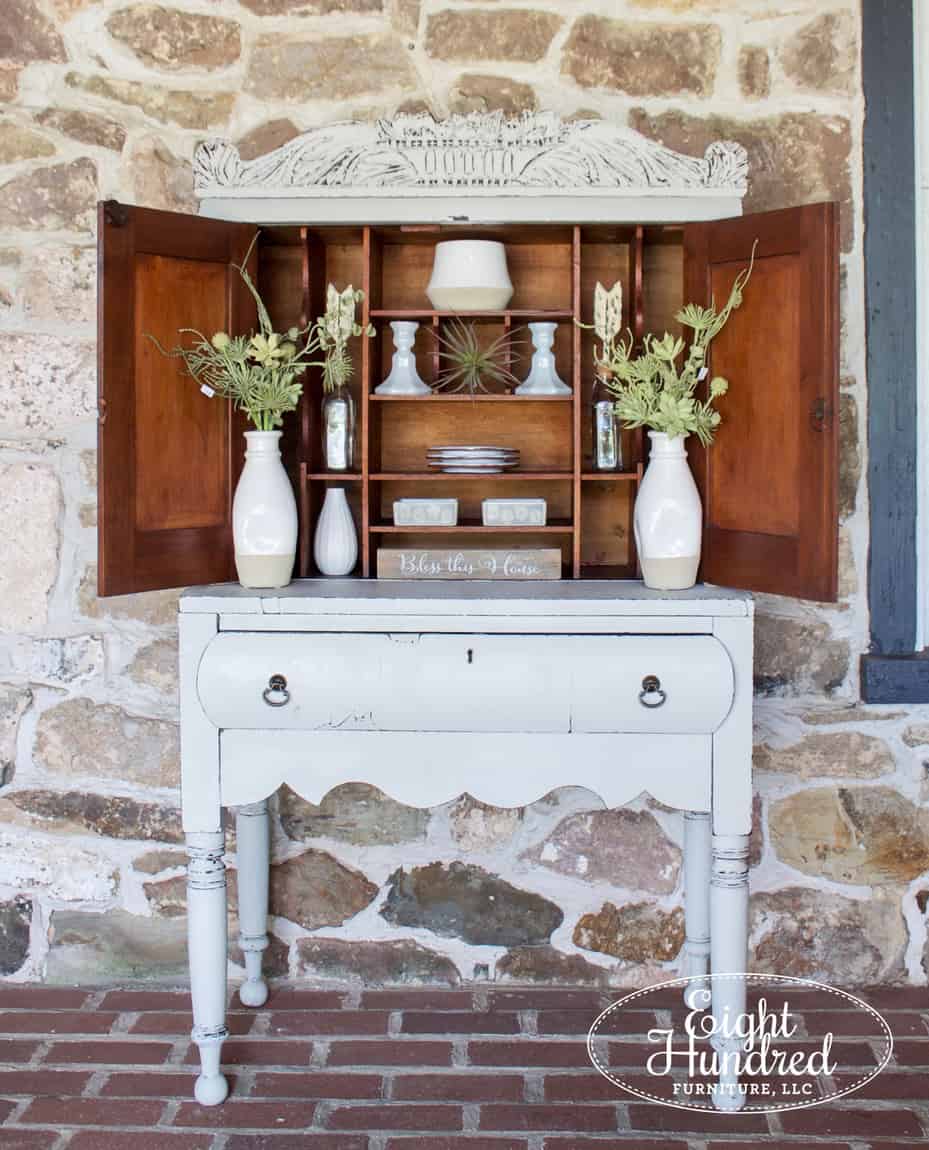 If this piece is also your kind of pretty, you can purchase it at Painted Table Designs in Elverson for $435 + tax.  If you loved the goodies inside, they’re for sale too!

← To Sell Or To Suit? Trophy Oak Dresser →