Do you remember the two depression dressers that I picked up from a super sweet Instagram follower a few weeks ago? 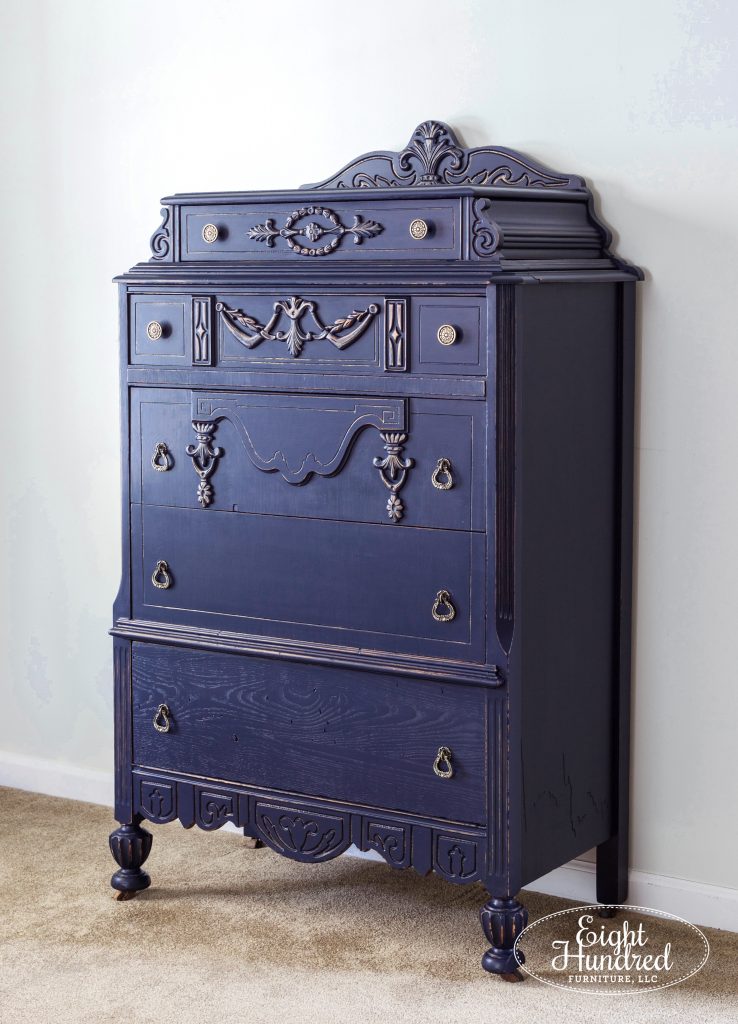 Whelp, the same seller also gave us a Thomasville chest of drawers. 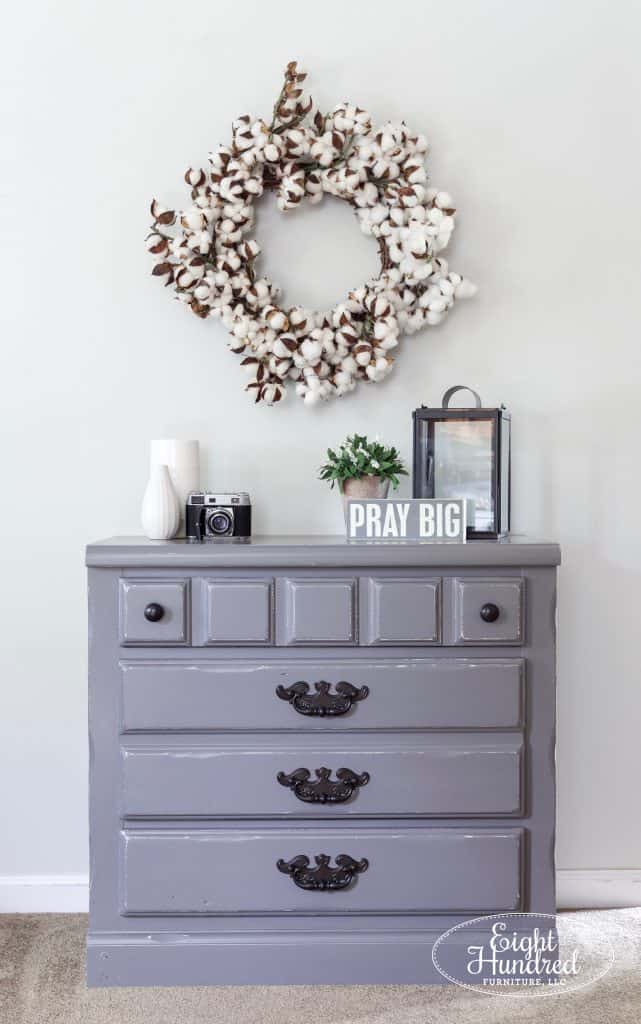 Trust me – it didn’t look anything like this when I got it! As a matter of fact, it was downright 80’s-90’s fabulous. Despite its dated appearance, it was well constructed and I couldn’t bear to see it thrown away, so we took it home with us along with the 2 dressers.

The original finish on this 3 drawer chest had oodles of wood knots. Now you can’t just go and paint over them because they’ll bleed through. So, I sealed them using General Finishes Stain Blocker. 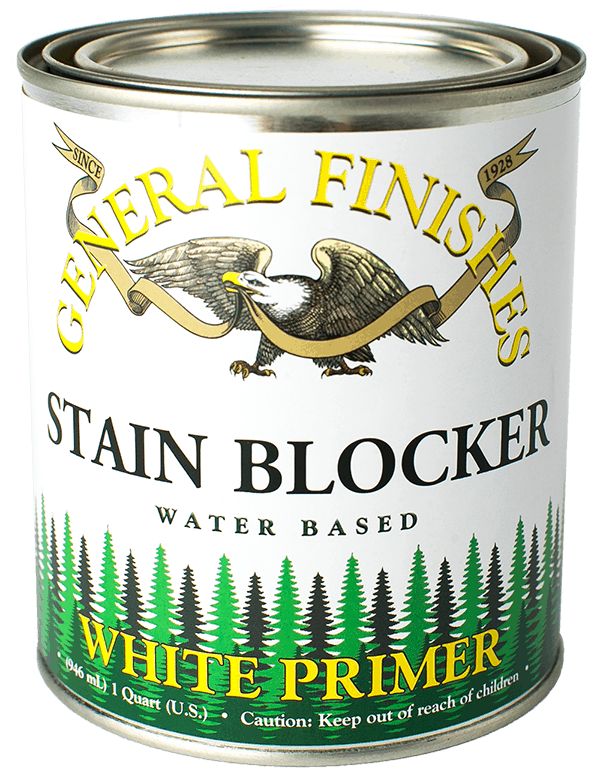 This is General Finishes white tinted water based primer that does exactly what it says – blocks stains. You can use it over an existing finish (such as paint or stain), raw wood or MDF as a base coat for light colored paint. General Finishes designed Stain Blocker for effectiveness, not price point. They advocate that a successful primer requires a sophisticated resin system and an atypical formulation, which is exactly what Stain Blocker contains.

I carry Stain Blocker in both of my General Finishes displays at Morgantown Market and Homestead Studios. Now, if you don’t have access to Stain Blocker, General Finishes recommends BIN shellac based white tinted primer. They have a cute slogan about it too – “BIN it to win it!” You can find this in the paint aisle of your local hardware store. (Take note that this product is shellac based…not water based.) 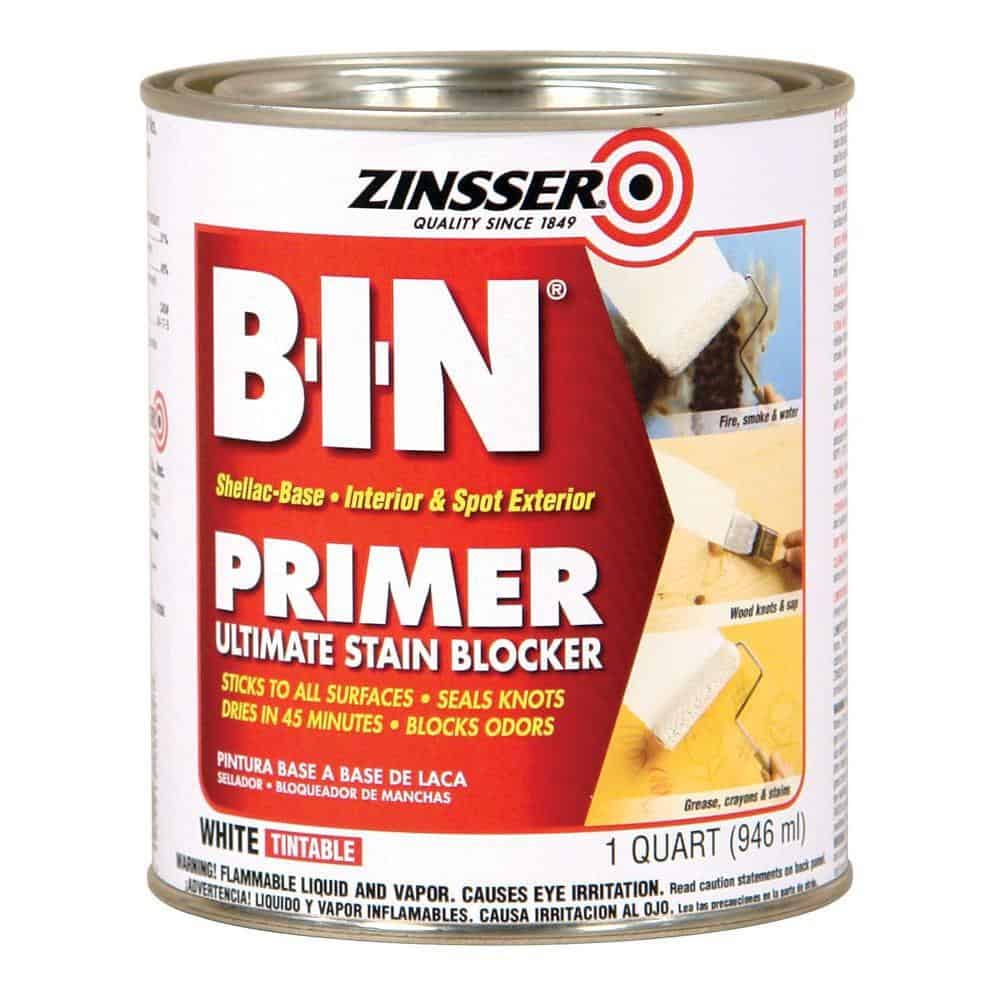 I cleaned my chest of drawers off according to General Finishes recommendations.

And then I applied two coats of Stain Blocker, waiting 24 hours in between each coat. You ALWAYS want to apply two coats of primer because the first coat draws the stains out. The second covers them up. And you want to wait 24 hours in between to make sure the primer has completely dried and set up. Failing to follow these steps can lead to primer failure, which isn’t the fault of the product.

To see how well GF’s Stain Blocker works, give this quick video a watch. Crazy, right?!

After priming, I mixed up a custom blend of General Finishes Milk Paint using equal parts Driftwood and Millstone.

The gorgeous taupe of Millstone warmed up the cool mid-tone gray of Driftwood, giving me a really lovely greige color! 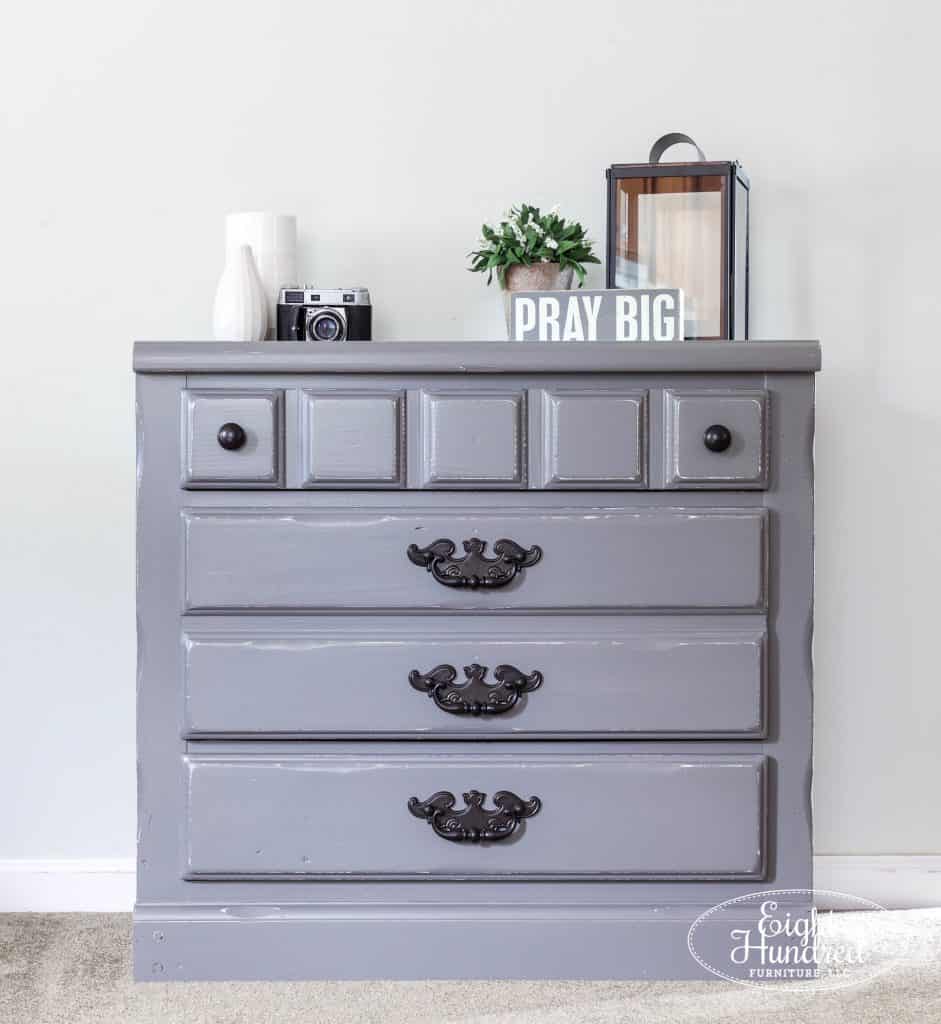 I gently distressed the edges, revealing the white primer underneath. It looks like I have white paint under there, but really, it’s just primer! 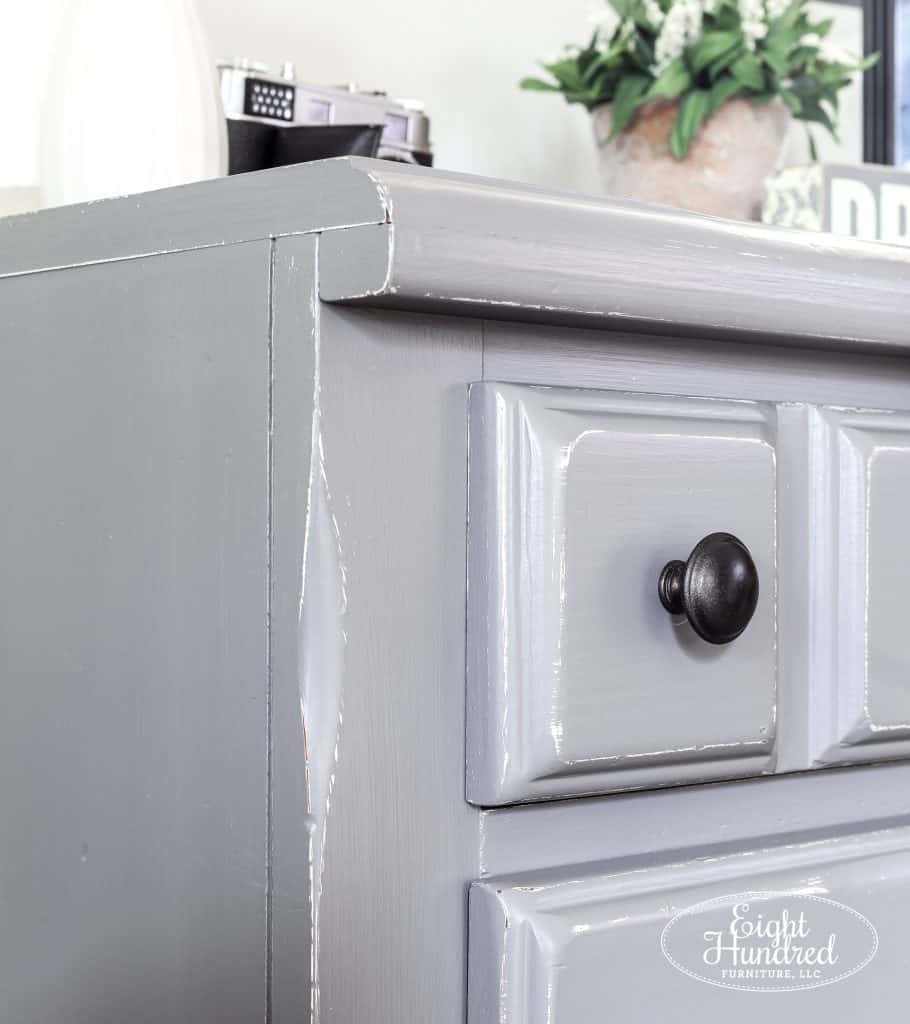 I wasn’t a huge fan of the original hardware, but the handles were a really strange measurement. The original handles were 4 1/4″, which is an odd size and hard to find. If I wanted to replace them, I would have needed to plug up the holes and drill new ones. To make my life easier, I simply spray painted them oil rubbed bronze. 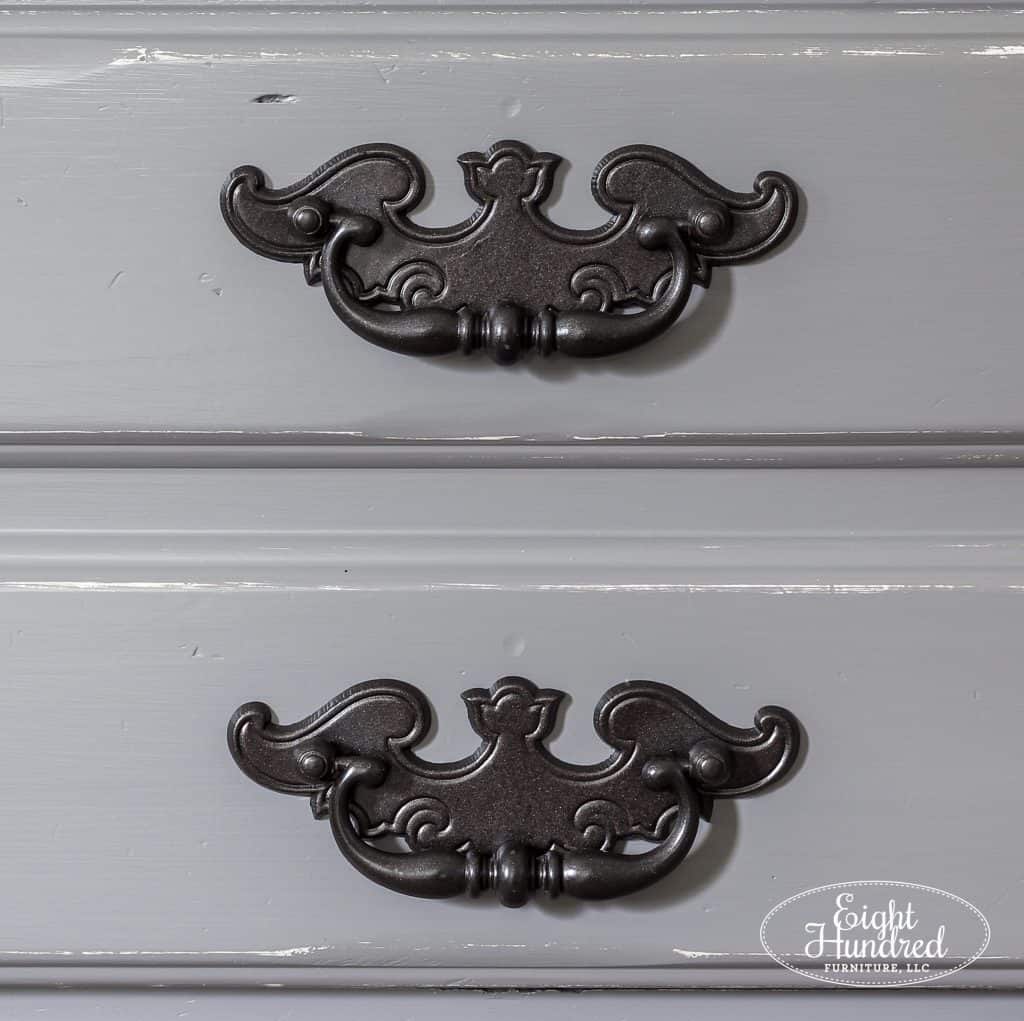 There were also 5 knobs total along the top drawer, which I thought was overkill. Two knobs at each end are quite enough. 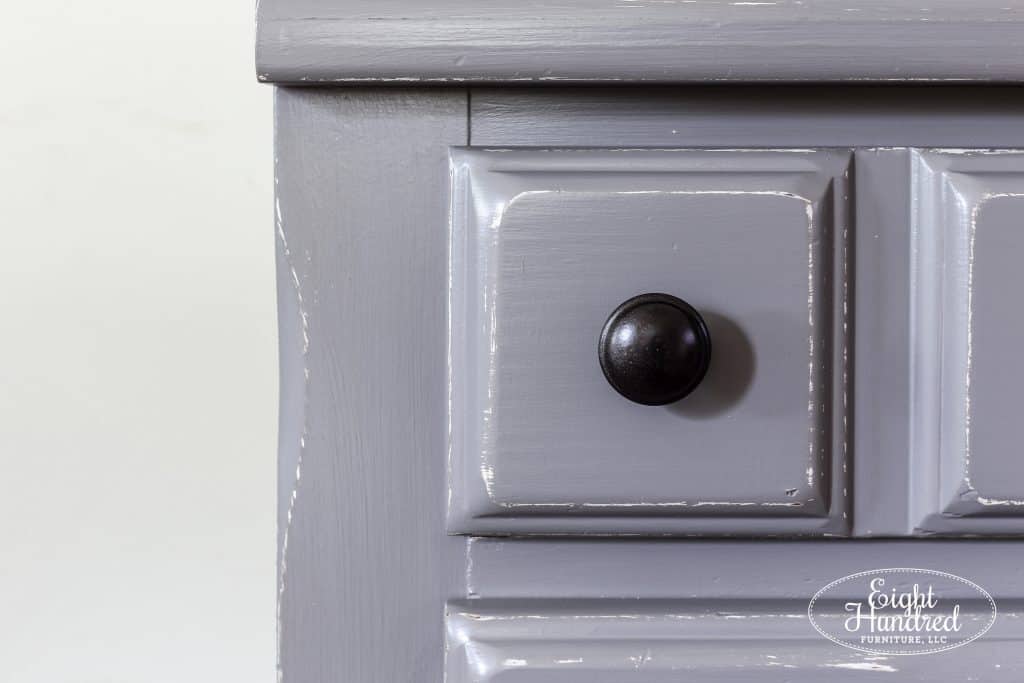 To pick up on the dark hardware, I used a black lantern in my staging. 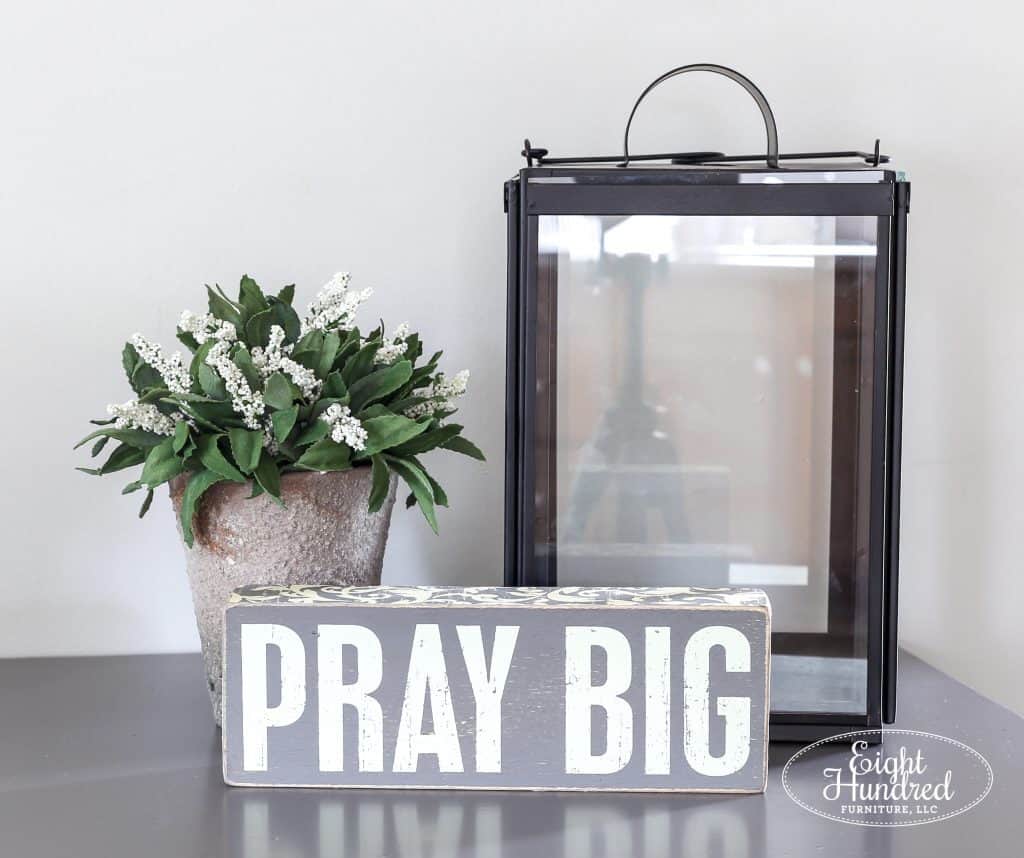 And on the other side of the chest, I brought out a really special camera. 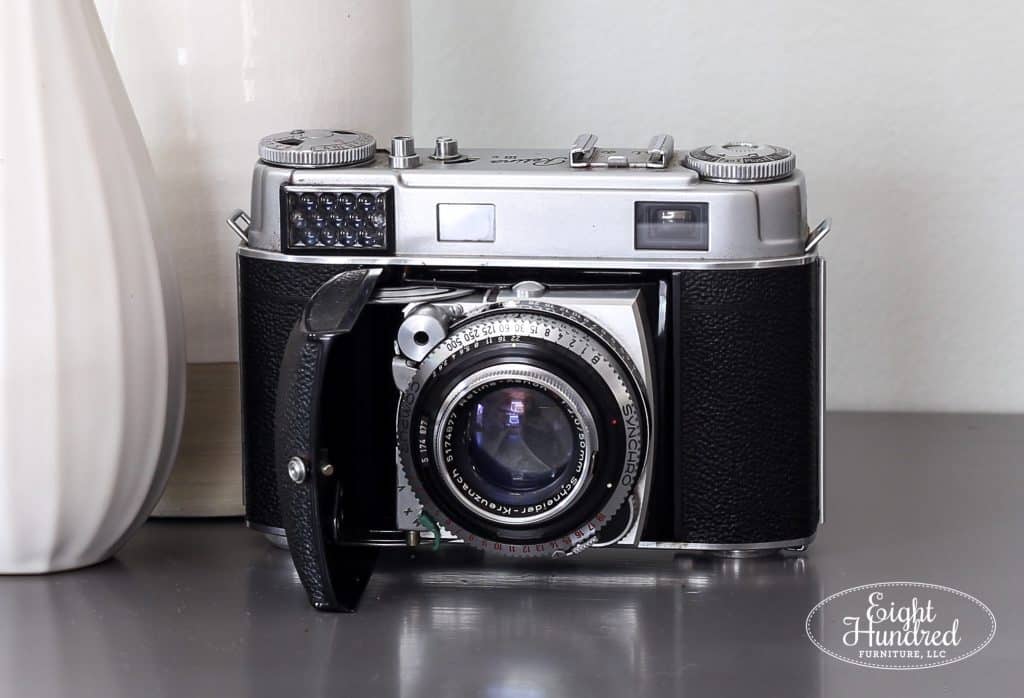 This belonged to my maternal grandfather who I never met. He died when my Mom was young from colon cancer. My aunt gave me his Kodak camera a few months ago, and it’s so beautiful. There’s film inside too, so I plan on sending it away to get the film developed and have the camera repaired. It’s jammed at the moment and I’m not familiar enough with vintage cameras to fix it. I’m secretly hoping that there will be long lost photos that will come out of it!

This chest of drawers would serve well as a piece in between two twin beds, in a powder room for storage or as a master bedroom nightstand. It’s a good medium sized piece that has sturdy drawers.  The middle one is the deepest and has a divider inside! 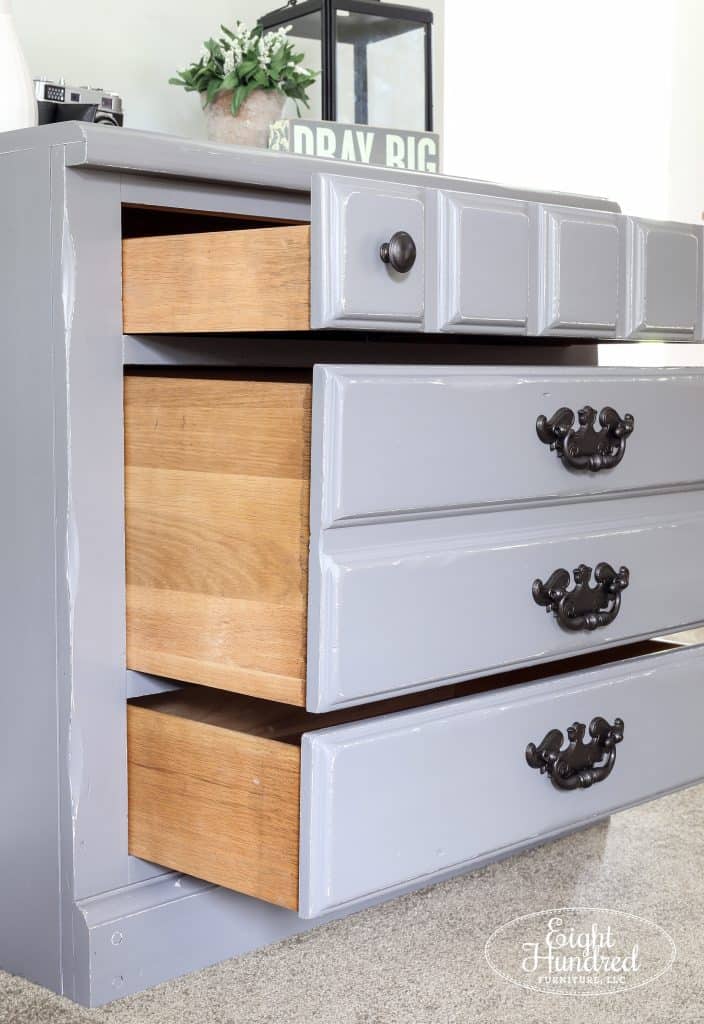 All of the drawers are clean and the top has the Thomasville brand inside. 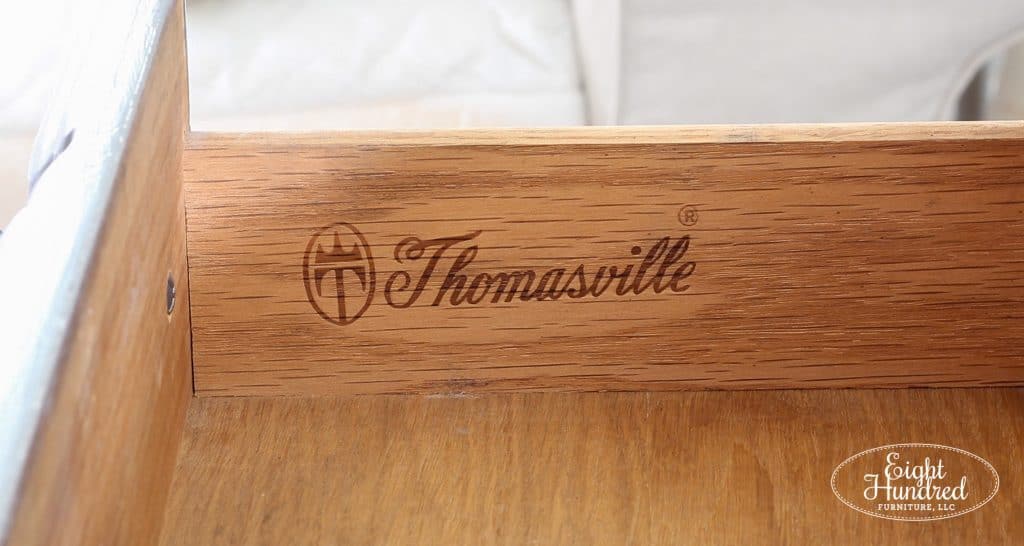 This piece is a great example of how you can update furniture that is not longer in style with a bit of paint. The piece itself is very solid, heavy and well constructed. It would have been a shame to throw it away just because it had a dated finish. With some primer, Milk Paint and a can of Rustoleum, this chest of drawers is looking SO much better now!